Pumpkin isn't just for pies anymore! This lightened up hummus is silky smooth and perfect for pumpkin season. The bright orange colour and hint of cinnamon may tip you off... make no mistake, this one's a stunner!

Happy Thanksgiving to all my fellow Canadians! I hope your day is filled with family and friends and lots and lots of pumpkin pie.

Thanksgiving is a holiday I don't feel like we do justice as expats, particularly since we don't know too many other Canadians here in Stockholm. Most of our other expat friends are American, so we generally end up celebrating Thanksgiving (or 'proper' Thanksgiving, as they call it) in November which is rad because it means we get to have pumpkin pie again but weird because it's Thanksgiving in November.

Making and eating pumpkin pie was about as Thanksgivingy as things got in these parts, otherwise we spent the day assembling Ikea furniture and reorganizing accordingly. It's always good to have pie to help with that kind of thing. 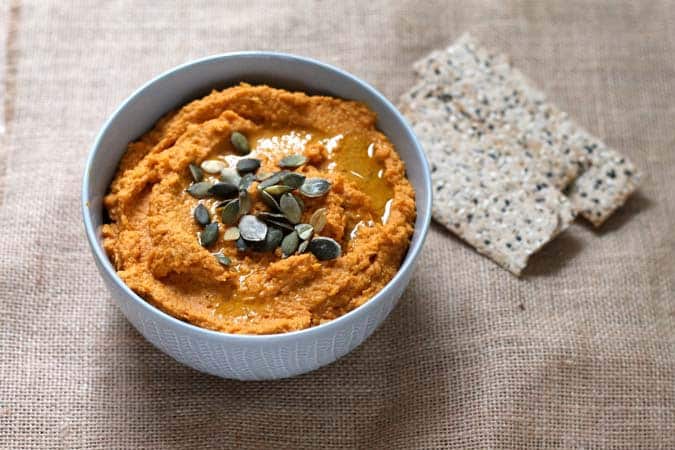 Pumpkin isn't just for pies, though! Pumpkin is also a fun and seasonal way to up your hummus game. The addition of pumpkin purée makes this a lot lighter than traditional hummus, both in texture and in terms of nutrition. There's just a hint of cinnamon along with cumin and a bit of smoked paprika which really rounds out the flavour.

You can use pumpkin hummus any way you'd use regular hummus. It's great straight up with some crackers or raw veggies, or you can use it in wraps, as part of a meal bowl, in a sandwich, on toast, whatever your heart desires.

This recipe makes a lot of hummus. A lot. It's because I wanted the recipe to use the entire can of pumpkin purée for those of you who are using canned pumpkin, which I suspect is most of you (power to you if you're roasting your own pumpkin). If you want a smaller batch of hummus and don't mind having a half can of pumpkin kicking around for something else (mayhaps a pumpkin smoothie?), by all means, halve the recipe. This hummus is very fresh, so only lasts a couple of days in the fridge.

Pumpkin, and other yellow fleshed winter squash, are jam packed full of carotenes, which is the compound ultimately responsible for their colour, and also is a pre-cursor to Vitamin A (you need that so you can see). Pumpkin also contains a good dose of fibre, potassium, vitamin C, and manganese. 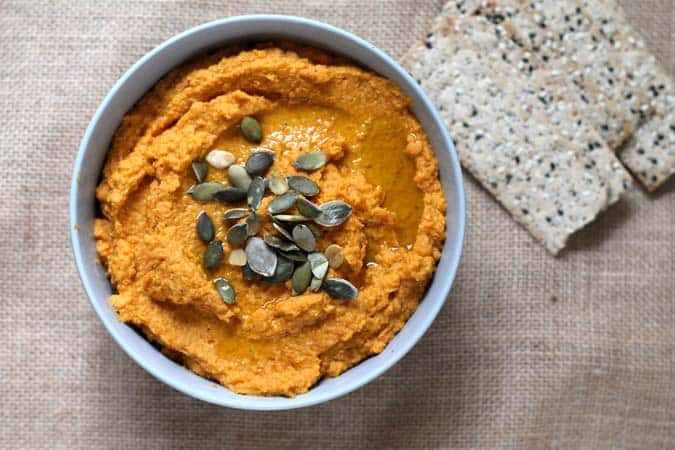 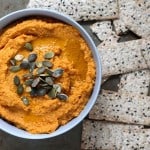 This recipe makes a lot of hummus because it uses an entire can of pumpkin purée - no pesky half cans lying around. If you'd prefer a smaller amount, half the recipe.
This hummus will last about 4 days in the fridge. 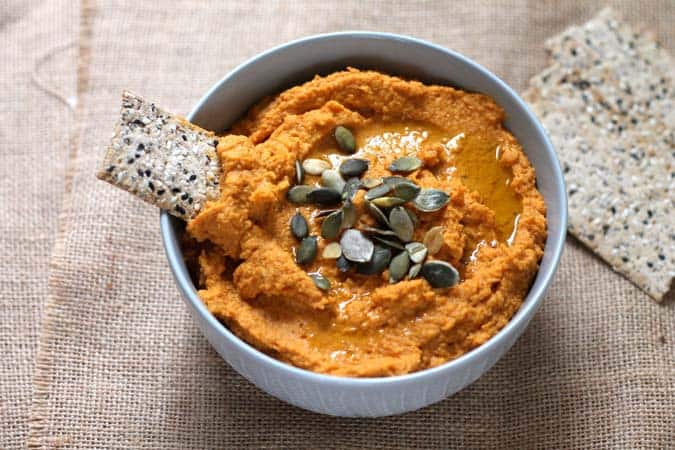