Autumn is definitely descending, and here in Stockholm it's happening more rapidly than I'm accustomed to. There is definitely none of the lingering Indian Summer that can happen on the West Coast of BC. We're losing daylight quickly, and I know the payback for all of those long summer days is just around the corner. Still, autumn has always been one of my favourite times of year. I love the crispness in the air, and the smell of the leaves. I like snuggling under a warm duvet and feeling the cold night air on my nose through an open bedroom window. And, when I think deeply about it, I enjoy the sort of melancholy atmosphere that comes as the days are growing colder and shorter. It can be peaceful compared to the hubub of summer, when most people I know feel like they need to be up-and-at-it and making the most of the season while it's hanging around. Autumn is also, I've realized, the time that I feel the most nest-y. I'm filled with this deep desire to bake and can and freeze and pickle, to put up reserves to get through the winter. It must be some long ago forged survival instinct that hasn't yet realized that there is a supermarket mere blocks away that is selling fresh raspberries. In October. In Stockholm. And I must say, I hope it never does.

As I mentioned previously, one of my favourite things about autumn is the winter squash that becomes so abundant at this time of year. We discovered there is a Farmer's Market not too far away from our apartment that goes on Saturday mornings until the end of October, and there was reportedly squash galore, so off we went. Paul did a brisk tour of the vendors, made an efficient purchase of some fresh salmon for his dinner, and took off for the swimming pool. Which left me, his Farmer's Market crazy wife, alone, in a brand new (to me) market. Fortunately (or unfortunately, depending on how you look at it) I was on a strict cash budget, so there wasn't too much damage done. I have a bit of a problem when it comes to Farmer's Markets, and fresh local food in general. Paul loves telling the story about the time we were on the Sunshine Coast and, after going to our favourite farm stand for some produce, I dropped him off to go for a run. He told me he was going to go one way, but ended up going another, and totally busted me back at the farm stand for round two. Like I said, I have a problem. Anyways, I walked home from the market on Saturday with some kale, fallen apples, 15 precious farm fresh eggs, and a pumpkin.

I had it in my mind before heading to the market that I wanted to construct a roasted pumpkin lasagna for dinner that night. See, I'd been reading all about lasagna over at Smitten Kitchen, and although her lasagna was mushroom based and I absolutely despise mushrooms (which, as a vegetarian, is the bane of my existence), reading the recipe started the wheels turning. There are two main similarities between the lasagna I made and the one over there; the simplicity, and the use of a béchamel sauce for the base. The rest is fairly different, especially in that this is a pumpkin lasagna, not a mushroom one. I decided to sandwich a layer of ricotta between two layers of roasted pumpkin, and, I decided to make the ricotta myself. Like I said, I'm feeling nest-y. Let me just say two things about that: 1) You don't have to do it. A store-bought ricotta is perfectly acceptable. 2) Home made ricotta is really easy. I used a variation of this recipe from 101 Cookbooks, only I used way less milk (2L total) and I used only whole milk with the juice of 1 lemon added, because I didn't have any buttermilk, I don't know the Swedish word for buttermilk (update: just learned it, it's kärnmjölk), and I wasn't going to waste money on mystery milk and have it turn out badly. The lemon juice added the acidity that the buttermilk would have contributed, and it worked just fine. My only regret was that I didn't make more. Next time I'll use 4L milk instead.

Also not necessary is all the time I spent meticulously peeling the pumpkin and cutting the bits into pretty little half moons. By the time they were roasted some were falling apart when I was placing them into the lasagna, and by the second layer, when I realized that all of my efforts at keeping them pretty were being covered up with noodles and béchamel sauce, I forgot why pretty had been so important in the first place.

I have an incredibly generous mother-in-law who not infrequently gifts me with fine kitchenware. It is her I have to thank for all of my All-Clad collection, and most of my Le Creuset pieces. Just before I returned to Stockholm in September she added an another piece of All-Clad to my collection; an adorable saucepan and whisk, which she requested would show up in a blog post soon. I promise you that I did use the saucepan for making the béchamel, and the whisk, but I did not get a picture of it, and for that I am truly sorry (I have a healthy fear of my mother-in-law, as people should), Tess, I promise I'll make it happen. In my defense, I was making the béchamel and the ricotta and peeling and coring fallen apples for an apple crisp and monitoring the roasting pumpkin and dealing with the lasagna noodles all at once, so picking up a camera wasn't a top priority. Furthermore, it's getting dark pretty early, as I mentioned, and getting decent pictures in the later parts of the day is becoming increasingly challenging. Rest assured though, each and every piece of my All-Clad collection was called into action for this dinner.

Speaking of photography, this post is the first one to feature photos taken entirely with my new (to me) Canon DSLR! Do you notice a difference? The learning curve has been mighty.

The béchamel sauce is seasoned with dried sage that comes from my friend Alice's garden. She sent me back to Stockholm with a variety of dried green herbs tucked into ziploc baggies, which didn't look suspicious at all. If you're using dried sage, use quite a bit. The flavours of this dish are quite neutral, and require a bit of a kick. Adding some garlic or other seasoning to the sauce would be a great idea. If you're using powdered sage, proceed with caution. That stuff packs some punch. If you have fresh, go for it!

Being nest-y and all, I would have loved to have taken this recipe over the top by hand making the lasagna noodles as well. Alas, my Kitchen Aid mixer, for which I have the fabulous pasta roller attachment, didn't make it with the rest of our stuff on the boat to Stockholm. Something about the power . . . one day I'll have a European version, or I'll acquire a hand-crank pasta roller. In any case, I used dried noodles, and I was not happy with my noodle selection. I picked up these fancy looking Italian ones that were flat squares, as opposed to having crinkly edges. What that ended up meaning is that when they cooked they all stuck together in the boiling water, despite my best efforts to keep them apart with two spatulas (seriously, you should not have to stand over a pot of boiling noodles fighting to keep them apart), and then stuck together even more while cooling in the colander. Do yourself a favour and either pick up some fresh noodles (or make some!) that you don't have to boil, or if using dried, use the no-boil kind. 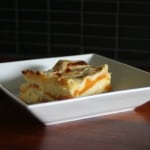 This recipe may seem daunting due to all of the various working parts, but it doesn't have to be. A store-bought ricotta is a perfectly fine substitute for home made, and seriously, save yourselves the headache and just buy some fresh lasagna noodles or use no-bake ones. If you do use no-bake, you'll want to add a little extra sauce to compensate for what the noodles will absorb. If you roast the pumpkin ahead of time, or even make the béchamel in advance, this can come together quite quickly. Be sure to heat the milk up before you add it to the roux, otherwise you run the risk of your sauce becoming clumpy.
Prep Time 1 hour
Cook Time 1 hour 30 minutes
Total Time 2 hours 30 minutes
Servings 6 -8
Author Katie Trant

« smoked tofu gyoza
how to process a pumpkin »