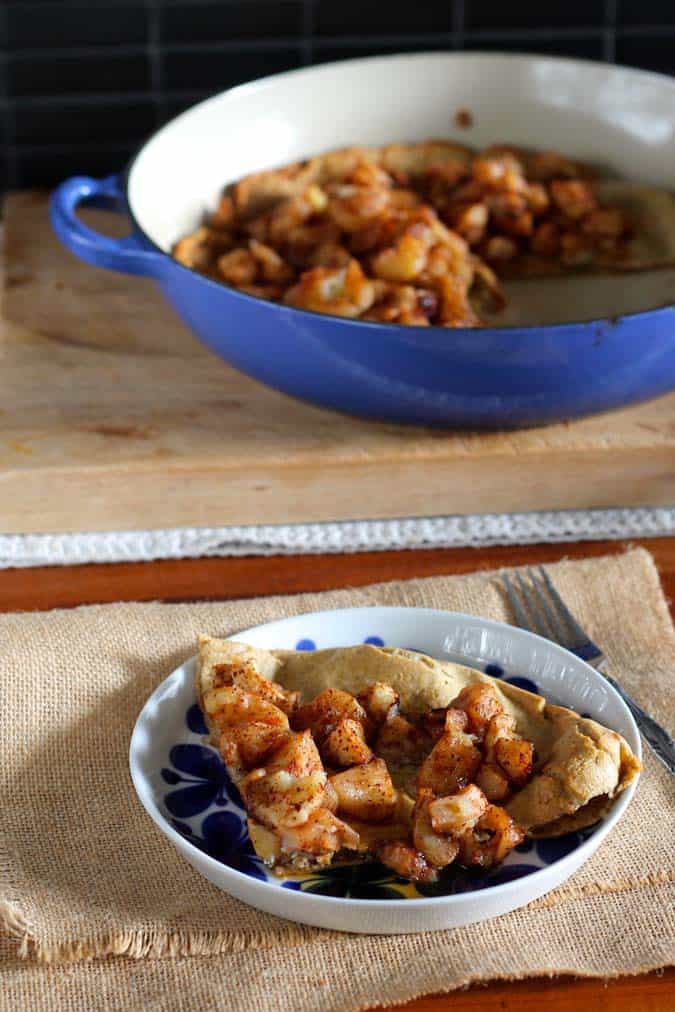 Paul and I are off to Amsterdam tomorrow for a weekend of marathon running (him) wandering the canals (me) and general good times (that'd be both of us). He very often chooses somewhere in the Netherlands for his fall marathon (nice, flat courses) so we've also passed through Rotterdam and Eindhoven, but it always means a stop in Amsterdam. We are beginning to know the city well, and have favourite places we go back to time and time again.

Monday morning after marathon day we almost always go to a restaurant called the Carousel Pancake House, which sits in the middle of an old fashioned carousel in a park. It's not fancy, but the menu has an extensive list of sweet and savoury pancake options (I can never decide!) and the pannekoek are dang near perfect. 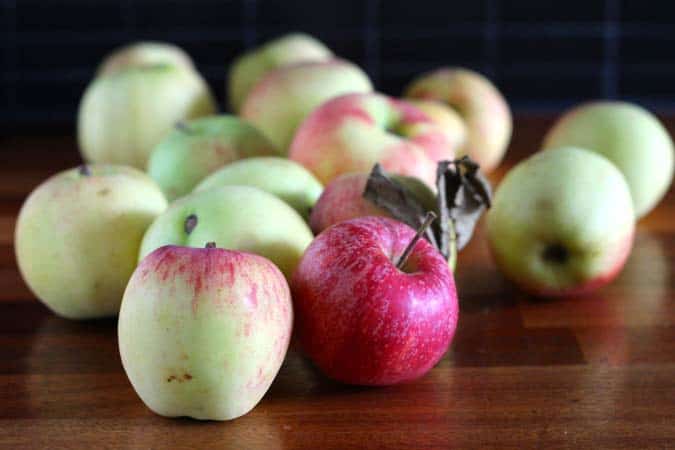 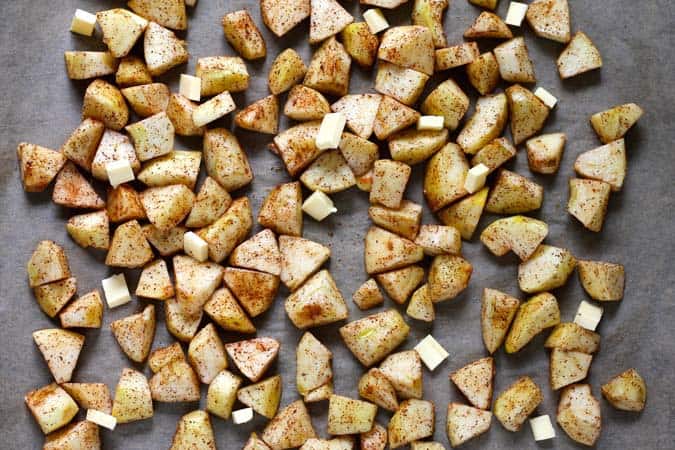 Regarding Dutch pancakes, I hate to be the one to burst your bubble, but a Dutch baby isn't really Dutch. Apparently they originated in Seattle, we're inspired by a German pancake, and named by some cute kid. Which I guess explains why a gigantic pancake meant to feed four people would be referred to as a baby.

So it's not Dutch, but it is quick and easy, fun to make, and delicious to eat. Ain't nothing wrong with that. Plus you could make yourself a Dutch baby this weekend - this Dutch baby, with maple roasted apples - and pretend you're with me in Amsterdam eating legit Dutch pancakes. We're in this together, right? 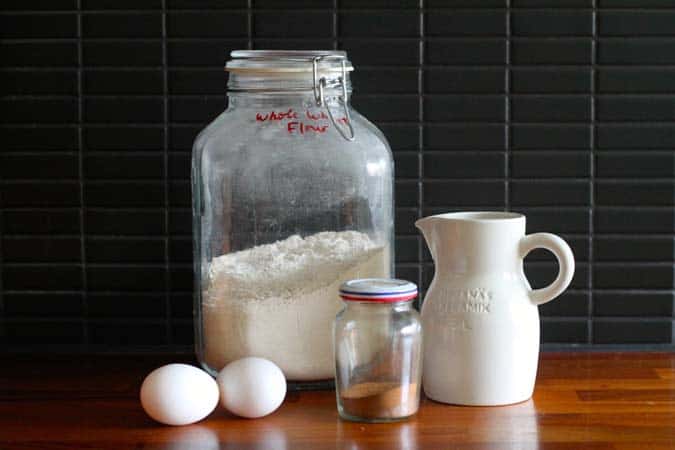 This Dutch baby is made with good things - whole wheat flour, eggs, milk, and a bit of cinnamon. It's a thin batter, much like a popover or Yorkshire pudding. I like to whirl it together in my blender, but a good whisk and a bit of elbow grease will work just fine too.

You heat a cast-iron skillet or other heavy oven-proof pan in the oven until it's screaming hot, swirl a little butter around (which browns pretty much instantly) and then pour the batter in. As it bakes it puffs up magnificently, but don't get too attached to that puff, it sinks away almost the instant the pancake comes out of the oven. 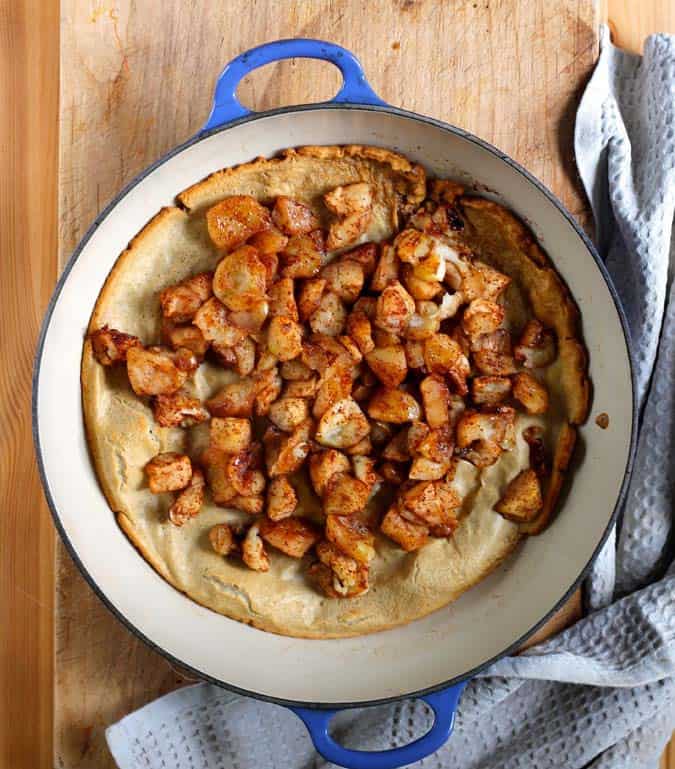 A tray of cinnamony maple-kissed apples roasted alongside the Dutch baby is the perfect accompaniment.

I was gifted a bag of apples from a friend's tree, so in they went. Just a shake of cinnamon, a touch of maple syrup, and a little bit of cubed up butter, and 20 minutes later you'll have a tray of sweet and succulent melt in your mouth appley goodness to spoon over the top of your Dutch baby.

Does an Apple a day keep the doctor away? Well, they’re definitely good for your heart. Apples boast well-documented cardiovascular benefits. These benefits are associated with the water-soluble fiber (pectin) content, and the polyphenol mixture in most apples. Both total cholesterol and LDL (bad) cholesterol are decreased through regular intake of apples. Another health benefit of apple consumption is blood sugar regulation. This occurs in a number of ways, including reduction of glucose absorption, slowing down of carbohydrate digestion, stimulating the pancreas to produce more insulin, and stimulating insulin receptors so that more sugar flows out of our bloodstream and into our cells. Apples also appear to have anti-cancer benefits when it comes to breast, colon, and lung cancer. Apples are a good source of fiber (both soluble in the form of pectin, and insoluble), and vitamin C. The nutrients in apples are concentrated skin, so buy organic, give them a good wash, and keep the skin on whenever possible. 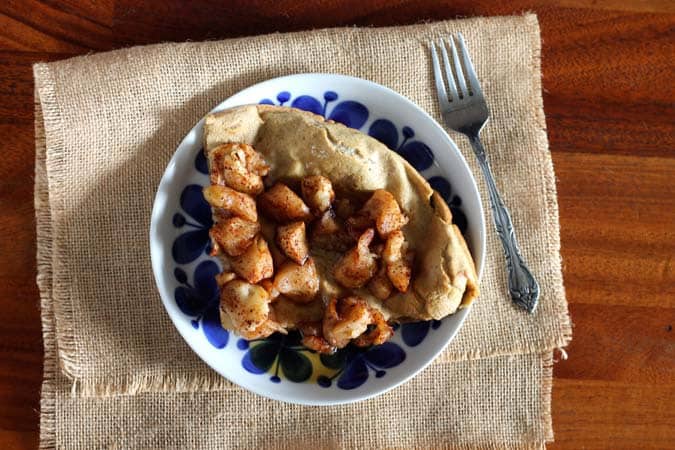 One year ago: DIY Vanilla Extract - start it now and it'll be perfect for December gifting!
Two years ago: Lentil Loaf 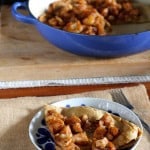 You can cook the apples and the Dutch baby at the same time. Prepare the apples first, and slide them into the oven at the same time as the pancake goes in. They both take around 15-20 minutes to cook.
If you prefer, the apples can be made in advance and reheated at the last minute.
Leftover Dutch baby is great eaten cold or at room temperature the next day - not that I expect you'll have leftovers.