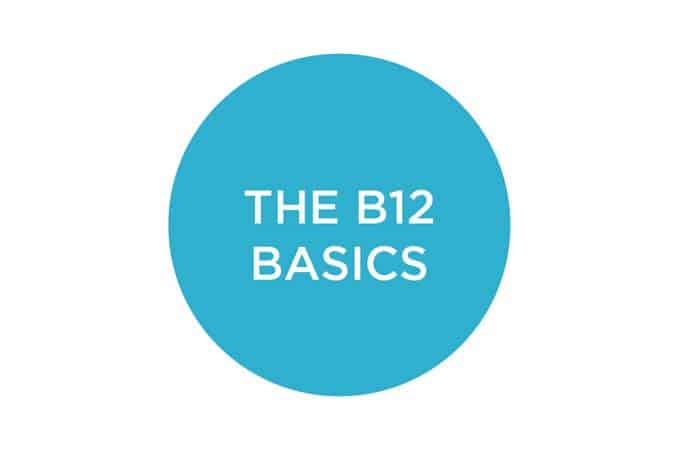 Next to questions about how we get enough iron, questions about getting enough vitamin B12 are some of the most common regarding a vegetarian diet. For this month’s nutrient in focus post, I thought I’d get down and detailed all about B12.

Vitamin B12 is one of eight B-vitamins. It’s a water-soluble vitamin, which exists in several forms and contains the mineral cobalt. Vitamin B12 plays an important role in the normal functioning of the brain and nervous system, as well as cell metabolism, fatty acid metabolism, amino acid metabolism, and the synthesis and regulation of DNA. Important stuff.

No plants, fungi, or animals are capable of producing this vitamin. All B12 is produced by certain strains of bacteria that have the enzymes required for its synthesis.

Many foods that are a natural source of B12 are that way due to bacterial symbiosis – that is, the bacteria and that food have a mutually beneficial relationship. For example, algae are believed to acquire B12 through a symbiotic relationship with heterotrophic bacteria in which the bacteria supply B12 in exchange for fixed carbon from the algae.

B12 can also be produced industrially through bacterial fermentation synthesis. This is where most of the B12 in supplements or fortified foods comes from. But the bottom line is that whatever the source, all B12 is synthesised by micro-organisms. Cool, eh?

How much we need:

Recommendations vary from country to country. The US recommended daily average (RDA) for adults is 2.4 µg (micrograms) of vitamin B12 /day. This bumps up to 2.6 µg during pregnancy, and 2.8 during lactation and breastfeeding. Some European countries recommend 3.0 µg/ day. Toxicity doesn’t seem to be a problem with vitamin B12; what the body doesn’t need is simply excreted in our urine.

Vitamin B12 is found in most animal foods, including meat, fish, poultry, eggs, and milk products. Other than some fermented foods, there are very few non-animal food sources of biologically active B12.

There are lots of vegan foods that are fortified with vitamin B12, including non-dairy milks, breads, cereals, meat substitutes, and some types of nutritional yeast. It is important to note that not all nutritional yeast contains B12, it must be fortified, so if you’re relying on nutritional yeast for your B12, check the label carefully.

To make matters concerning B12 and plant-based foods a bit more complicated, there is a group of biologically inactive (in humans) B12-like analogues referred to as pseudovitamin-B12. The pseudovitamins are found alongside B12 in humans and in many food sources. In most cynobacteria, including the blue-green algae Spirulina (which seems to be making a comeback these days) pseudovitamin-B12 is predominant. Pseudo B12 can make it difficult to test for B12 deficiency, as it can imitate true biologically active B12 in blood tests all the while interfering with B12 metabolism.

Very low B12 intakes can cause anemia (this is not the same as iron deficiency anemia) and can potentially cause severe, and often irreversible, damage, especially to the brain and nervous system. Heart disease and pregnancy complications are also of concern with B12 deficiency.

Our livers are able to store several years worth of vitamin B12, so deficiency symptoms may not appear for a period of 5 years or more. Long-term vegetarians and vegans should be tested for B12 deficiency and consider supplementation, especially if you’re following a diet that doesn’t include eggs, dairy, or fortified foods.

Some people don’t consume enough vitamin B12 to meet their needs, and others simply can’t absorb enough. Strict vegetarians and vegans are at high risk for B12 deficiency, and vegans eating a macrobiotic or raw diet that avoids fortified foods are at an especially high risk.

Babies born to mothers who are vegetarian and are exclusively breastfeeding may not get enough B12 if their mother is not supplementing – the American Dietetic Association recommends B12 supplementation for both vegans and lacto-ovo vegetarians during pregnancy and lactation to ensure enough B12 is transferred to the fetus and infant, as undetected and untreated B12 deficiency in infants can result in severe and permanent neurological damage.

Also, adults over 50 tend to have impaired B12 absorption and may not meet the RDA without supplementation, regardless of diet. And individuals with digestive system disorders such as Crohn’s disease, celiac disease, or IBS, or individuals who have had gastrointestinal surgery may not be able to absorb enough B12 from food to maintain healthy body stores and require supplementation as well.

The only way to know for sure if you’re lacking B12 is to see your doctor about getting a blood test. It’s important to get the right blood test too, as pseudovitamin B12 may make it seem like your B12 levels are adequate when in fact they are not. Blood homocystine levels may provide a more accurate measurement for those following a vegan diet, as opposed to blood B12 or blood counts.

If you’re following a strict vegan diet, you really need to know what you’re eating. The only reliable vegan sources of B12 are fortified foods such as non-dairy milks, breads, cereals, and fake meat products. But not all of these products are fortified and not all are fortified equally, so you should get to know your labels.

If you’re following a vegan diet you should either eat B12 fortified foods that add up to at least 2.4 µg/ day OR take a daily B12 supplement. If you’re going the supplementation route, it’s important to know that the body’s ability to absorb B12 from supplements is limited, so you’re going to want to aim for a supplement with around 10 µg or more. Some people choose for a large supplement (around 2000 µg) once a week as opposed to daily supplementation, but in general B12 is better absorbed in small amounts more frequently. Plus people tend to remember to take daily supplements better than remembering something weekly.

The bottom line? B12 is important stuff! If you're in an at-risk group for deficiency, get yourself tested. If you're vegan, read labels and understand which foods you're eating are fortified and how that adds up, and / or consider a daily B12 supplement. If you're vegetarian and are pregnant or are considering becoming pregnant, talk to your doctor about whether or not you need a B12 supplement (on top of the all important folic acid, also a B-vitamin). Take good care of yourselves, and know what you're eating!