If you've been hanging around here for a while, you've probably heard me rave about how much I love Vij's Indian restaurant in Vancouver. One of my favourite dining experiences of all time was a few years back when my sister, Emily, and her soon-to-be husband, Andy, were visiting Vancouver and decided to take the entire family out for dinner. They chose Vij's and we all turned up and got in line early enough to make the first seating, which was important because our party totaled nine people. (Having said that, the handful of other times I've eaten at Vij's we haven't made the first seating and have waited comfortably in the lounge, sipping wine and munching on the many little snacks brought our way, and frankly, I think that is an integral part of the Vij's experience;I'm now more inclined towards lining up early enough to get a seat in the lounge, enjoy the ambiance, and make the second seating. The reasoning behind the no reservations policy is well explained on Vij's website) When our server came by to start taking orders, Emily told her that some of us were vegetarian and some not, and could we just please have three courses of whatever they'd like to bring us. Best. Thing. Ever. We were brought dish after dish after dish of the most flavourful and inventive Indian food, and tried things that we may not have bothered to order. It was fantastic.

On a visit to Rangoli, Vij's more casual restaurant right next door, with some girlfriends last autumn, I picked up a copy of their newest cookbook, Vij's At Home. I brought the cookbook with me to Sweden, and it very quickly became one of the most used cookbooks in our home. Paul and I have somewhat different approaches in the kitchen; I am vegetarian, he is not. I tend to favour simplicity, choosing a few great ingredients to really showcase in a dish. Paul, on the other hand, wants to include as many ingredients and as much out of our spice cupboard as he possibly can.  Both I think can be wonderful in their own right. When we cook from this book it is, I think, is one of the times we can meld our approaches. The recipes tend to be simple, approachable for the home cook, and often showcase just a few main ingredients, but they are also rich, complex, and deeply spiced. The recipes work well for an omni / veggie couple. Perfect.

Most of the spices needed for recipes from this book, as well as Vij's first cookbook, are easily found at the super market. Some, however, may require a visit to an Indian market. Lucky for us, Paul has been supervising a masters student, Arun, who happened to be heading home to India for his wedding. He asked if we'd like him to bring us anything, and we copied down the entire list of spices from Vij's At Home. And he brought them. All of them. And a few more that we didn't include on the list but he thought we might like. Let's just say our spice cupboard (and freezer drawer now relegated to spice storage) runneth over.

Not all that long ago I was at a bar in Vancouver having a night cap with my friend Lindsay when I spotted Vikram Vij walk through the doors and take a seat at the bar. I was (more than) a little starstruck and I mentioned to Linz that I had been dying for a chance to ask him about a recipe that I'd been trying, for chickpea flour pudding, which just wasn't turning out quite exactly as I imagined it should. With a (not so) gentle nudge from Lindsay, I walked over to the bar, introduced myself to Vikram, and asked him my question. He was more than courteous and chatted with me for a good few minutes about this recipe. In the end he asked me to email him and said he would forward my question to his wife, Meeru. So I did, and he did, and a while later I got a lengthy response from Meeru explaining the ins and outs of this chickpea flour pudding, answering my questions about flour types and the intended texture of this pudding. What nice people!

Wanting to share a recipe from their wonderful book on this blog, I emailed the publisher to request permission, and quickly received a reply with a list of approved recipes and an accompanying credit line. From that list I chose this Spicy Cauliflower Steak, something that I may not have otherwise tried. I'm so glad I did. The dish is starkly simple with just one main ingredient, cauliflower, which is then bathed in a rich, spicy, tomato masala. I made this last weekend for my friend Erin, and we ate it, soaking up the masala with home made chapatis, as mung beans in coconut curry (the recommended accompaniment) simmered away. I made a couple of modifications to the original recipe, namely, reducing the oil just ever so slightly (sorry Vikram, the nutritionist in me made me do it), and, because my carton of pureed tomatoes was a touch bigger than what the recipe called for, I increased the amount of tomato puree (though in hindsight I could have frozen the extra ½ cup for future use). Otherwise I made no changes, and it was fantastic. I will certainly be making this simple and spicy dish again.

Hey, have I mentioned that I graduated?! Well, here's proof! Laura-lee Gerwing came along and took some photos on the big day. Here are a handful of my favourites: 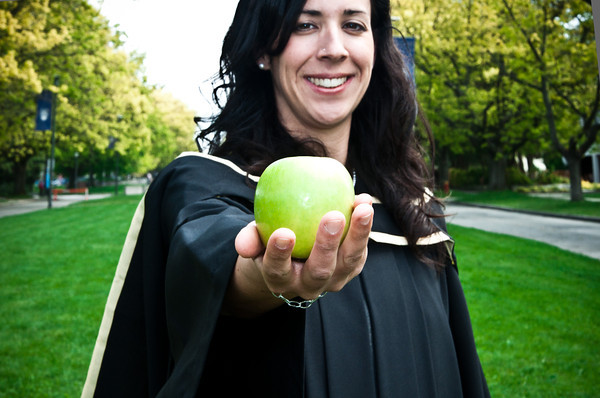 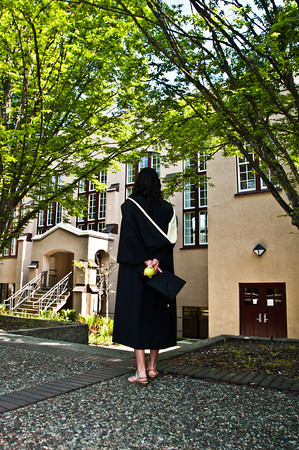 From the book Vij’s at Home—Relax, Honey: The Warmth and Ease of Indian Cooking © 2010, by Meeru Dhalwala and Vikram Vij. Published by Douglas and McIntyre, an imprint of D&M Publishers Inc. Reprinted with permission of the publisher.

This cauliflower dish is, as the name states, very spicy. If you're sensitive to spice you may want to adjust the amount of cayenne pepper. I left out the optional spices, cloves and a cinnamon stick, simply because I didn't have them handy. I'll for sure be trying this recipe again with them included.

1 head cauliflower, outside stalks cut off

½ cup cooking oil (I used olive oil because that's what I had on hand, and I used closer to ⅓ cup)

3 inch cinnamon stick (optional - I left it out)

Cut the cauliflower into 6 wedges, as if you were slicing a round cake or a pie. Wash and set aside to drain in a colander.

Combine oil and tomatoes in a large wide pot on medium-high heat. Add ginger, salt, tumeric, cumin, coriander, cayenne, cloves, and cinnamon. Stir well and saute for 3-4 min, or until the oil glistens.

Reduce heat to low and add the cauliflower to the pot. Use a spoon to gently stir so the masala covers all of the pieces, spooning some masala over the cauliflower.

Increase the heat to medium, cover, and cook for 8-10 minutes, stirring once half way through. If you notice the cauliflower isn't cooking, increase the heat. If the sauce is sticking to the bottom of the pot, reduce the heat. Cauliflower should be soft, but not mushy.