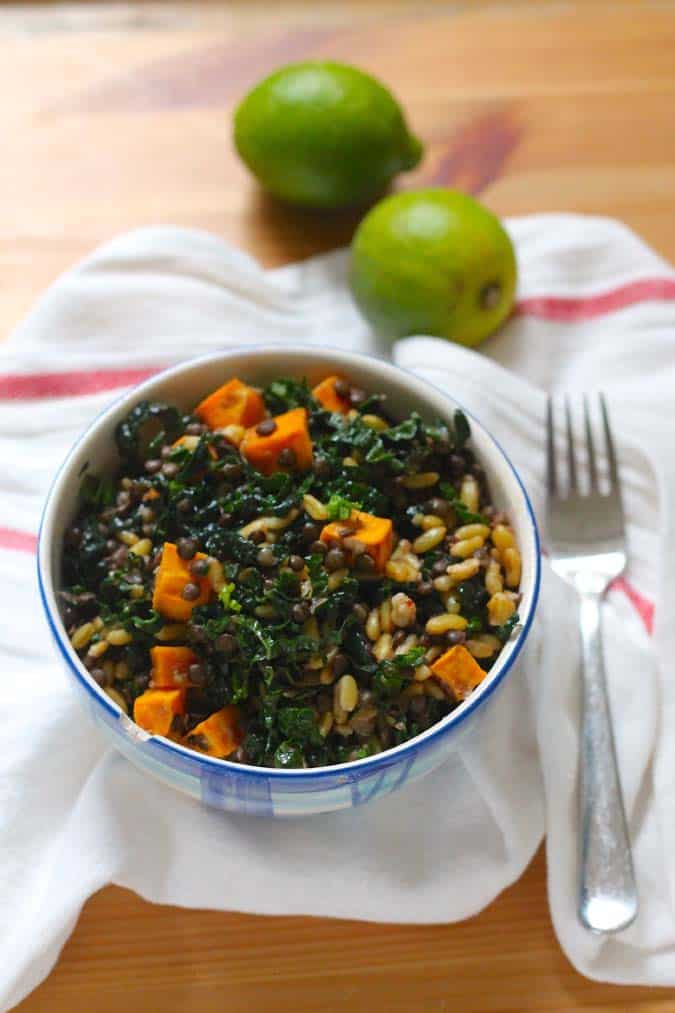 Stockholm is way the heck up north. Not quite in the arctic circle, but we’re kissing it. For perspective, we’re just a smidge further north than Juneau Alaska.

At this time of year taking photos for the blog becomes a real challenge. Photographing anything after work is out of the question as it’s already dark by 3:30 in the afternoon, and it’ll get only darker still. Before work isn’t much better. This limits me to a weekend frenzy of prepping and photographing during which my husband is under no circumstances allowed in the kitchen (a rule which he never abides by) and at the end of which it looks like a bomb has gone off.

Sometimes the photos don’t turn out all that well, especially on a grey and dreary day. If I was a better blogger I’d hold off on posting those recipes until I had better pictures. But I’m not, and so, you get this salad.

Manky as the photos may be, I assure you this salad is all kinds of delicious. It’s full of all of the goodness of the season: roasted sweet potatoes and kale are a match made in heaven. Chewy whole grain kamut and beluga lentils turn this salad into a substantial meal. And the chipotle lime dressing is the stuff that dreams are made of. 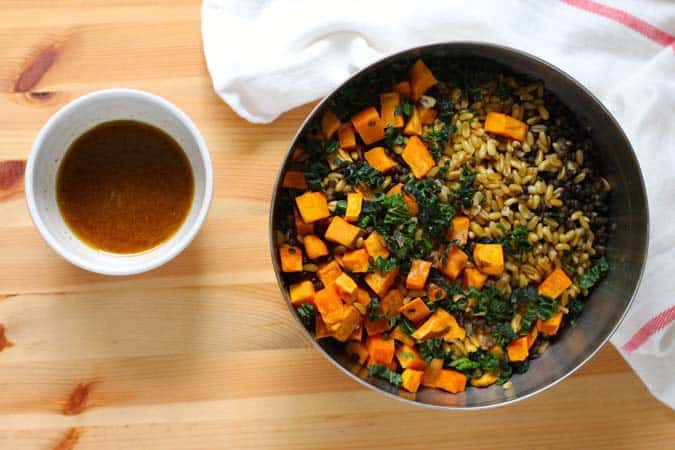 This salad is an excellent make-ahead meal. Kale is sturdy enough for a dressed salad to last a few days in the fridge. One might even say it improves a bit with time as the kale gives way to the dressing and loses its edge. If you leave the dressing off, this salad will last the entire week in your fridge. Just pack the salad in airtight containers with a little jar of dressing tucked along side (I like to repurpose those little jam jars you get in hotels) and you’ve got an entire week’s worth of lunches in one fell swoop.

One last thing – I’ve tagged this salad as vegan in spite of using honey in the dressing. I’m aware that honey isn’t technically vegan, but it’s my preferred sweetener for flavour, consistency, and because I’ve got a great jar of local ecological honey on hand. If you’re vegan you can replace the honey with agave, or you could try maple syrup though I have not tested that flavour combination.

Kale is a nutritional powerhouse! It is extraordinarily rich in micronutrients, dietary fiber, anti-oxidant and anti-inflammatory nutrients, and cancer fighting glucosinolates. Kale is a good source of vitamin C, beta-carotene, manganese, and contains nearly twice the vitamin K (essential for blood clotting and also an important anti-inflammatory agent) than any other cruciferous vegetable (broccoli, cabbage, etc).  Iron, magnesium, vitamin E, folate, and phosphorous are among the complement of vital minerals found in kale. The dietary fiber in kale is known to reduce blood cholesterol levels. One recent study showed that this benefit may be improved by lightly steaming kale for about 5 minutes before consuming. 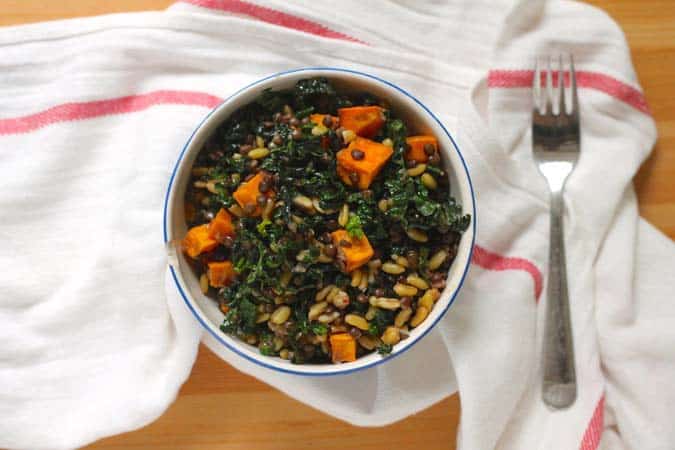 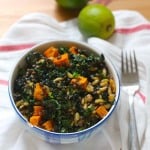 This hearty nutrient-packed salad is great for make-ahead meals. If you leave the dressing off it'll last a week in your fridge, and is perfect for packed lunches.
Prep Time 30 minutes
Cook Time 30 minutes
Total Time 1 hour
Servings 4 -6
Author Katie Trant

-If you're making this for make-ahead meals or packed lunches, leave the dressing off until you're ready to serve. A little jar of dressing tucked alongside the salad is great for packed lunches. Dress it, and let it sit a few minutes before you eat so the kale can soften.
-If you're cooking kamut or another whole grain for this salad, cook twice as much as you need and stash the other half in the freezer for next time or for another meal. 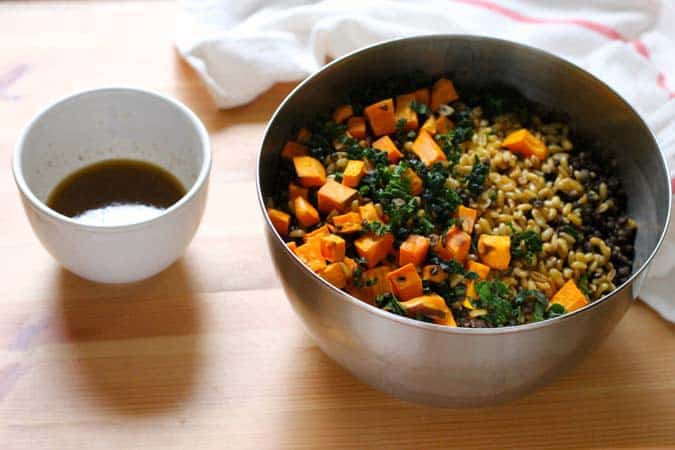