This salad is something I’ve been meaning to share with you guys for a while now.

I first had it two summers ago when I was staying in a sleepy little beach town in the south of Sweden and popped into a café during a rare afternoon to myself. I liked the salad so much that I went back the next day, had it again, and wrote down the list of ingredients.

I do love a good grain salad, and I think this one is perfect for this time of year, when most of us would rather not be spending much time in the kitchen. There isn’t too much chopping involved, and there are several shortcuts you can take along the way.

Look for tiny cherry tomatoes that don’t need to be sliced in half. Buy pitted olives. Crumble the feta with your hands as opposed to cubing it up. Just roughly chop the pickles, and only if you want to - they're already pretty small. Cook two or three times as much grain as you need, and freeze the extras for future kitchen shortcuts.

The salad that was my inspiration had pearl onions, roasted whole to a beautiful caramelly brown. When I set out to recreate the dish, I spent a ridiculous amount of time trying to slip silvery skins from tiny onions while keeping them intact. Unless you have copious amounts of free time and genuinely nothing better to do, don’t bother. Instead, chop a red or yellow onion into bite sized chunks and roast that. Or, slice your onion into thick slabs and throw it on the grill. Or, caramelize the onion in a pan, stirring only occasionally, while you’re cooking the spelt. Or skip the cooked onion altogether and enjoy the fiery bite of it raw.

Between the salty feta, olives, and zippy pickles, not much of a dressing is needed here as the ingredients pack a lot of flavour. I’ve kept it simple with a glug of good olive oil, some freshly squeezed lemon juice, and a handful of fresh dill.

The main thing is to not put too much effort into bringing this together. Get outside and enjoy your summer!

So what's so super about spelt? This ancient grain is related to modern-day wheat, but it has more protein, and a different blend of proteins than conventional wheat that is easily digestible and can often be tolerated by wheat-sensitive individuals. Spelt does, however, contain gluten, so it is not an option for those with celiac disease. Spelt is rich in fiber, a complex of B-vitamins, phytonutrients, and important minerals such as iron. Like most whole grains, spelt contains a noteworthy amount of folate, magnesium, selenium, vitamin B2, niacin, thiamin, copper, vitamin E and A. 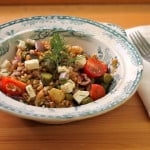 As with so many recipes, feel free to modify this one to suit your personal preferences. The thing that takes the longest is without doubt cooking the whole grains, so plan ahead and make extra for next time. I like to freeze cooked grains in one-cup portions.
Prep Time 30 minutes
Cook Time 30 minutes
Total Time 1 hour
Servings 6
Author Katie Trant