I've been holding off on posting this recipe, a little fearful that I'd lose those of you who have been faithfully making each and every thing I've posted over the last 14 weeks with something scary and laborious sounding like home made gyoza. Don't be afraid! A home made dumpling like these tasty smoked tofu gyoza  is not hard to make. Time consuming, yes, but difficult, no - especially with the aid of pre-made wonton wrappers for the outer casing, available in the produce section of most grocery stores.

If putting the time in to making something that requires repeated folding and sealing seems intimidating, here is what I propose you do: throw a gyoza party! Hear me out: gather a bunch of your pals together, get some sake or (and!) a few big bottles of Sapporo or Kiran, and get your fold on! I guarantee you'll have a better time than if you'd gone to the movies, and have a delicious meal to boot.

I got inspired to try making gyoza after a dinner out at a Japanese restaurant in Vancouver - the last supper for Paul and I en route to the airport before he headed back to Stockholm and I hung around in Vancouver for a little while longer. I had some veggie gyoza as a part of my meal, and I was struck by the simplicity and tastiness of the filling. I figured I'd give it a try making my own at home. The very next day I found myself in the produce section of a local grocery store with a package of wonton wrappers in one hand and a cabbage in the other, and it was a done deal. I was making gyoza.

Pork is a traditional filling for gyoza, but I wanted to make a vegetarian version (I think that goes with out saying), so I chose some smoked tofu, cubed up into teeny little squares. I used Soyganic, but Soya Novu also makes a nice smoked tofu  (if you're local to Vancouver) and I'm sure there are others out there as well. If you can't find smoked tofu, regular firm tofu would do the job as well, you'll just need to add a little more flavour to your filling.

The bulk of the filling is cabbage - an entire head. It may seem like a lot of cabbage, but it cooks down considerably, and it also makes a lot of gyoza. Shredded carrot, ginger, garlic, and caramelized onions make up the rest of the filling.

The filling comes together quite quickly, and then comes the time consuming part - filling, folding, sealing. Going at it solo it took me about an hour to assemble two trays of gyoza. How many you end up with will be largely determined by how full you stuff them (I figure I ended up with around 60, give or take). I'd advise you to take a less-is-more approach at first. You'll likely run out of filling before you run out of wrappers, and they are harder to seal shut if you've over stuffed them.

You can cook all of your gyoza at once, or you can freeze them and eat them a few at a time. Place them on a baking sheet lined with parchment paper and freeze in a single layer. You can transfer them into a freezer bag once they've been flash frozen.

I played around with a few different methods of cooking these from frozen, and I found that the best thing do whether you're cooking them fresh or frozen, is to pan fry them in a large skillet with a little bit of vegetable oil. If you're cooking from frozen, start with the heat a little lower and cover the skillet with a lid to keep the heat in. I found that boiling them first, even really gently, meant that quite a few of them fell apart by the time the cooking was done. I also tried a method my friend Sylvie suggested: putting the frozen gyoza in the skillet and pouring a teeny amount of water in, covering with a lid to let them steam, and then adding a touch of oil to fry them in, but I found a lot of them ended up sticking to the pan and falling apart using this method as well.

If gluten isn't your thing, you can also stuff the gyoza filling into rice paper wrappers, and roll them up like little Asian burritos. I found some rice paper wrappers in the cupboard while I was making these, so I made a few in this manner for a gluten intolerant friend. They weren't as pretty as the gyoza made in circular wonton wrappers, but every bit as tasty.
I made a simple dipping sauce with soy as the base, and packed these up for a picnic by the beach. They traveled well, and were as good at room temperature as they were piping hot. Leftovers also made great packed lunches, cold, served on top of a spinach salad. 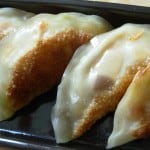 Look for little round wonton wrappers in the produce section of your grocery store - often found near the tofu, conveniently. If you keep your ginger root in the freezer, it grates really nicely into a fine powder on a microplane or the fine side of a box grater. I don't bother peeling mine.
Prep Time 1 hour
Cook Time 5 minutes
Total Time 1 hour 5 minutes
Servings 6
Author Katie Trant