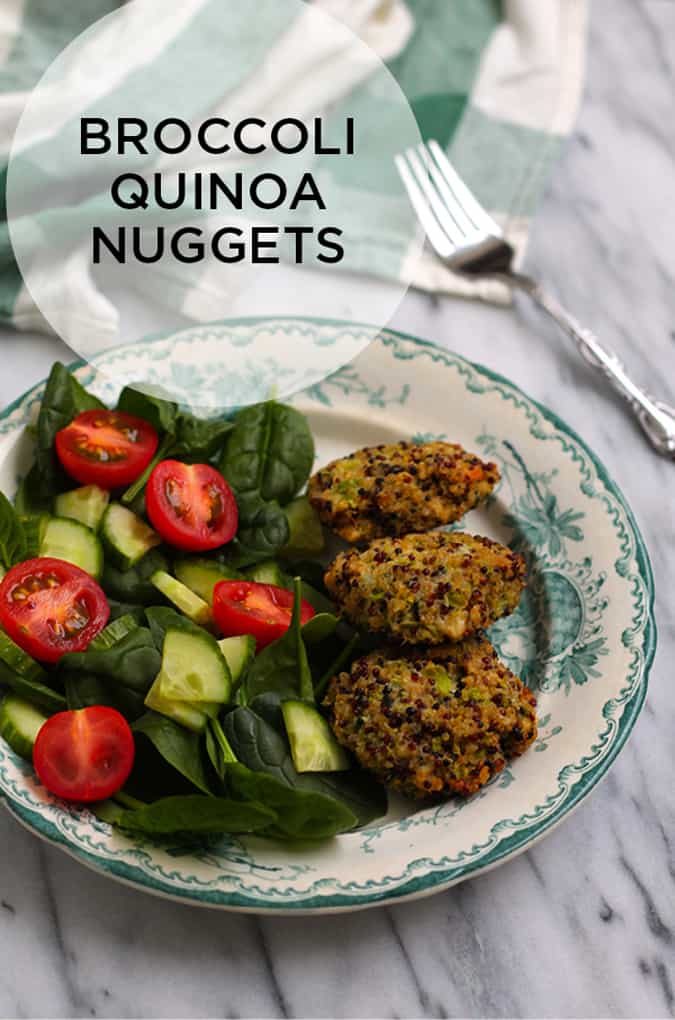 For years, I’ve been telling people what to eat. Giving gentle (and at times not so gentle) nudges towards balance and moderation, eating lots of plants, and enjoying the food you eat. So I thought that when it came to feeding a tiny human I’d be a natural. Wouldn’t that make sense? But when the time arrived to start offering food to my little man, I felt overwhelmed by the prospect. The responsibility seemed immense, and well beyond the scope of what 10 years of nutrition studies had taught me.

Over the summer, as we inched towards that magical six-month mark, I read the book on Baby Led Weaning (BLW). Though I found the reading painfully slow and repetitive, I liked the concept and was determined that this is how we would approach feeding; we would give him whole foods and he would feed himself and he would be a gloriously good eater.

The thing about babies, though, is that they are tiny little humans who have not only ideas of their own about how these things will go, but also, at the age of six months anyways, have terrible dexterity. So when the auspicious day rolled around and we dutifully lined up some chunks of banana and slices of avocado on the tray of his highchair, the food flew out of his slippery little hands and onto the floor as quickly as we could scoop it back up for another try. After a week or so of this going on, I thought two things: hot damn we are wasting a lot of food, and, omg I am going to be breastfeeding forever (this coincided with the arrival of two rows of razor sharp little teeth, and a period of nearly impossible, fussy, distracted nursing). 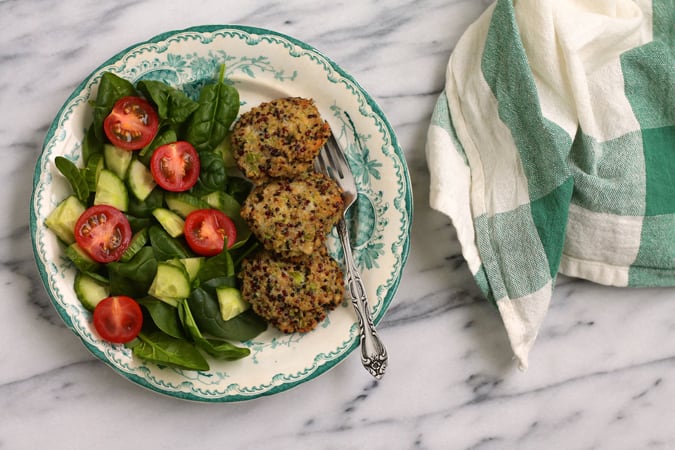 There is also the issue of iron, which, as my mother pointed out to me somewhat repeatedly, BLW may not properly address. It’s a fair point though, as the recommendation is to introduce any iron-rich food by six months of age, when the iron stores accrued in utero begin to deplete. The ever-so-popular first foods of avocado and banana do little to rectify this.

Now that I have an almost-nine-month-old and a few months of experience under our belts, I realize that I’ve circled around to approaching feeding in the same way that I do all things nutrition: focused on balance and moderation. Two meals a day are spooned, and when he is hungry and in the mood for eating our little man cranes towards the spoon with his mouth open in earnest, like a famished baby bird. We start the day with an iron-fortified baby cereal and some fresh fruit, and end it with an assortment of increasingly chunky homemade purées.

Another two meals each day are self-fed, and as time goes by less and less of that food lands on the floor and more and more actually goes down the hatch. He loves toast with peanut butter, or tiny waffles, or rice cakes smeared with cream cheese, lightly steamed broccoli and carrots, and, when it was in season, corn on the cob was a bit hit. I like to make him little baby omelettes with shredded zucchini, and, of course, he’ll go for a taste of whatever we happen to be eating along side him. 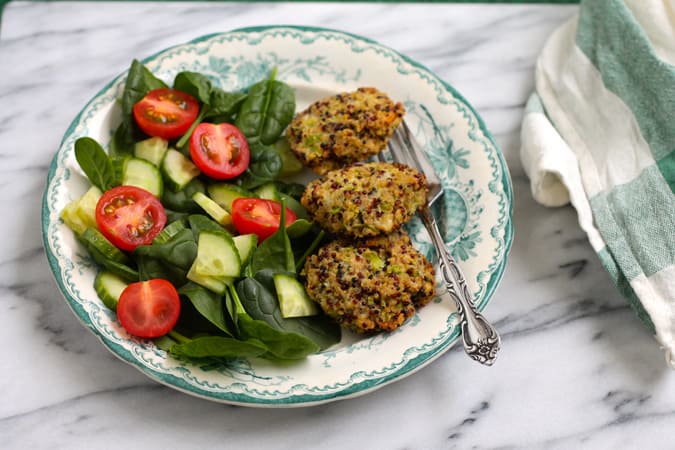 Lest you think it’s all tenderly prepared homemade food for this boy, let me assure you that he is obsessed (obsessed!) with those pre-made baby smoothies that are sucked from a pouch. If he sees one of those he’ll lurch forward with a crazed look in his eyes and the boy who just moments before was refusing his dinner will suddenly be starved for the contents of the pouch. Feeding a small person has taught me to relax, and to let go of any notion I had about the way things should be done. Being firmly attached to doing something a particular way seems like only a recipe for frustration.

These broccoli quinoa nuggets were something I made to be a complete meal, more or less, that could be picked up and eaten with little hands, or for those more mature among us, eaten alongside a green salad and eaten with knife and fork. They do generate a fair number of dishes, but many of the components can be made in advance which makes quick work of the actual nuggets. And you can bake up a big tray of them and then, once cooled, pop them into a freezer bag and just pull out one or two at a time.

You already knew that Broccoli is good for you, right? It is a great source of vitamin C, dietary fiber, and high broccoli consumption is thought to be beneficial in the prevention of heart disease and some cancers. Quinoa not only has a very high protein content (about 18%), but this super seed also contains a complete set of essential amino acids, making it a complete protein. It’s a great source of dietary fiber, phosphorous, and is high in magnesium and iron. 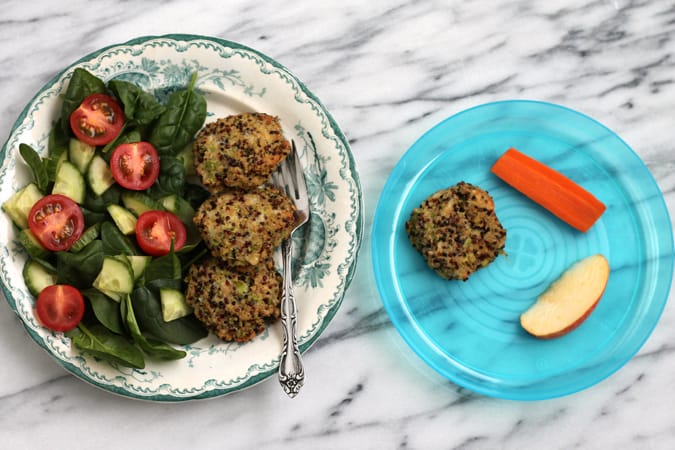 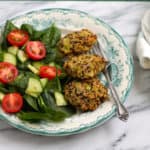 Broccoli quinoa nuggets are perfect for little hands to pick up and much on. One or two nuggets is a complete meal for baby, or delicious served alongside a green salad for bigger folk.
Prep Time 30 minutes
Cook Time 20 minutes
Total Time 50 minutes
Servings 16
Author Katie Trant

-This recipe makes about 16 nuggets depending on how big you make them. -To freeze, place in the freezer on a baking tray in a single layer. Once they're frozen you can pop them into a freezer bag and they'll be good for about 3 months. 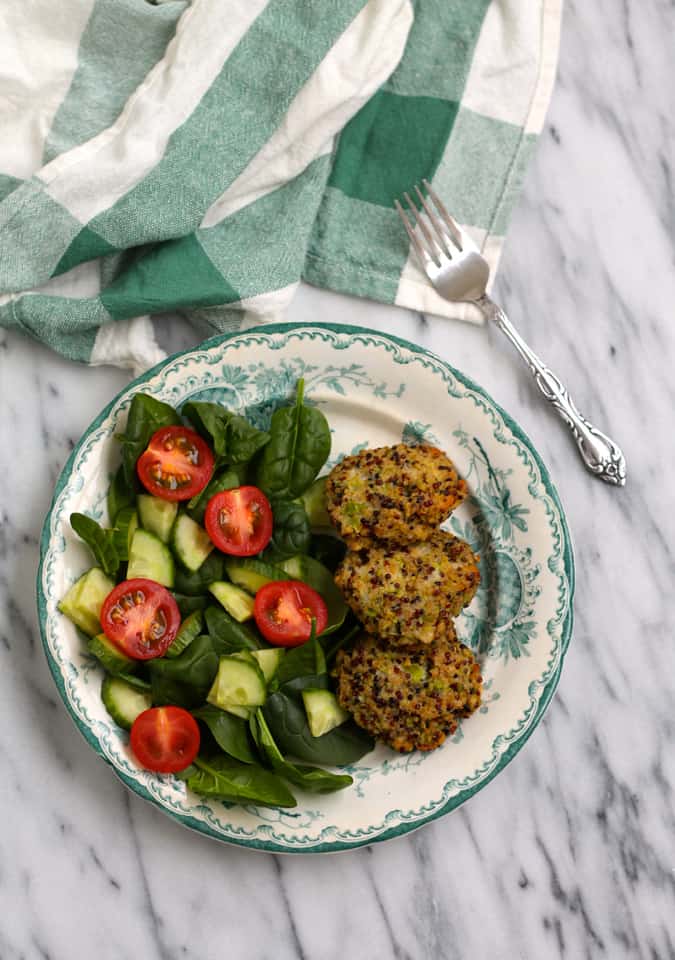