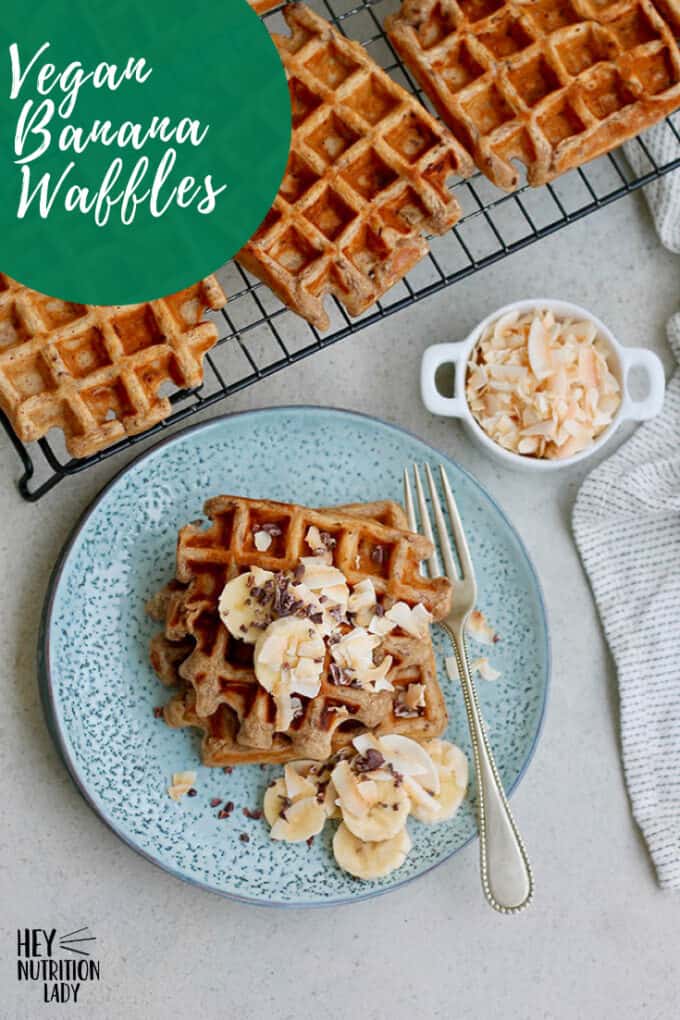 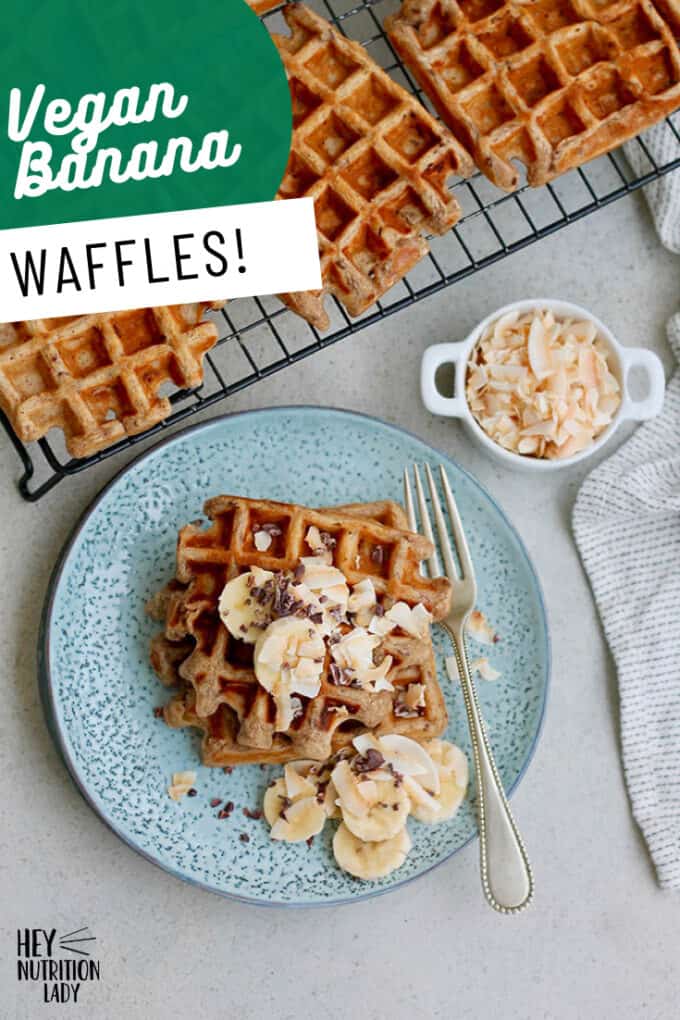 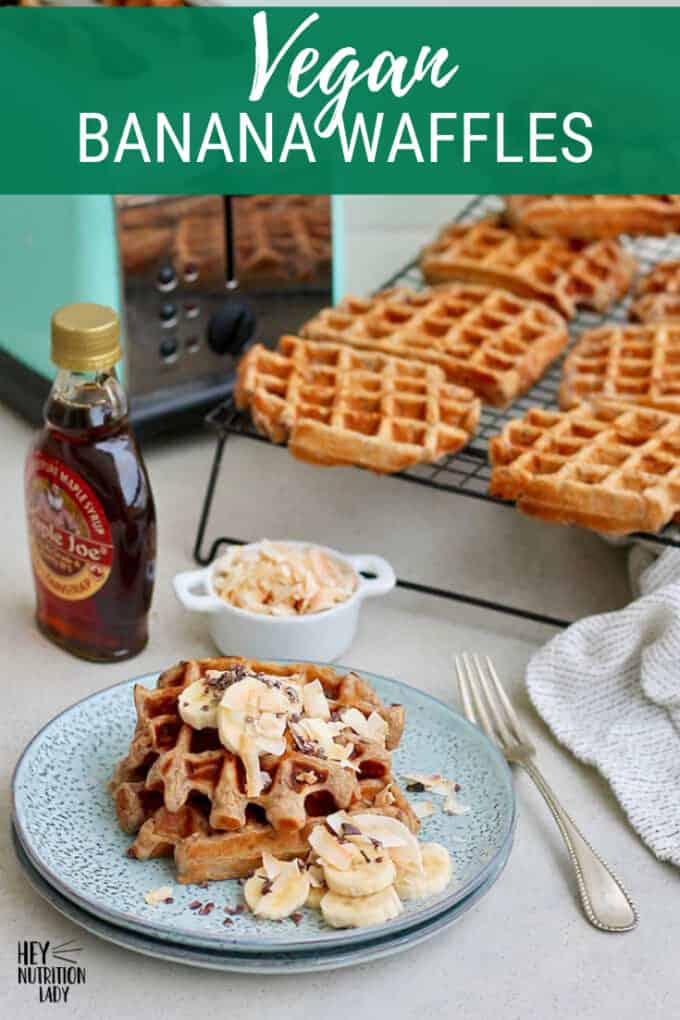 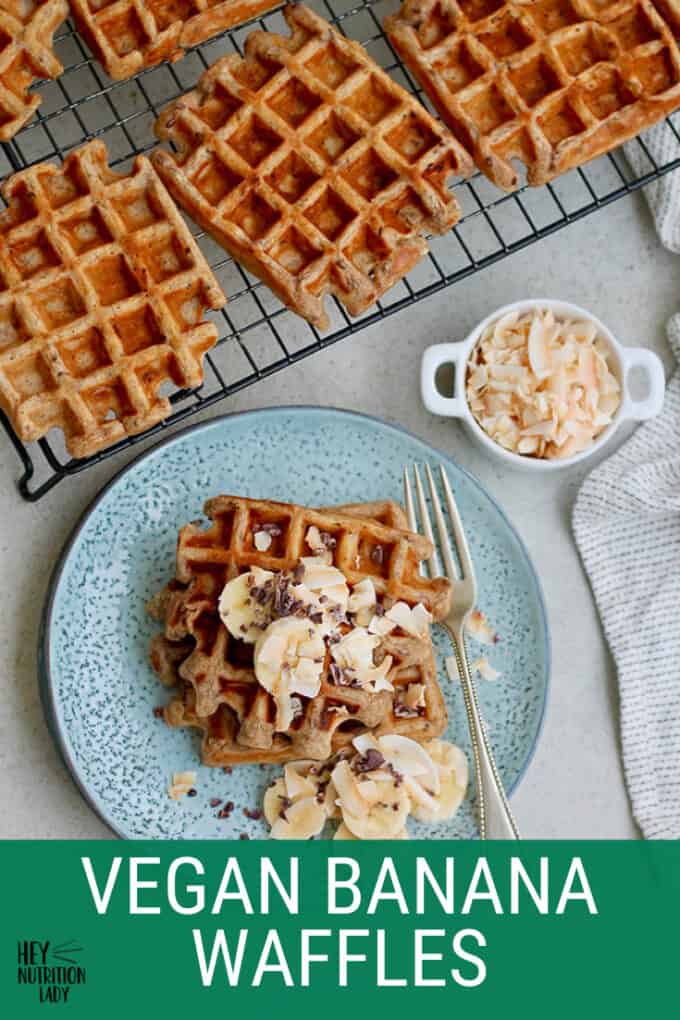 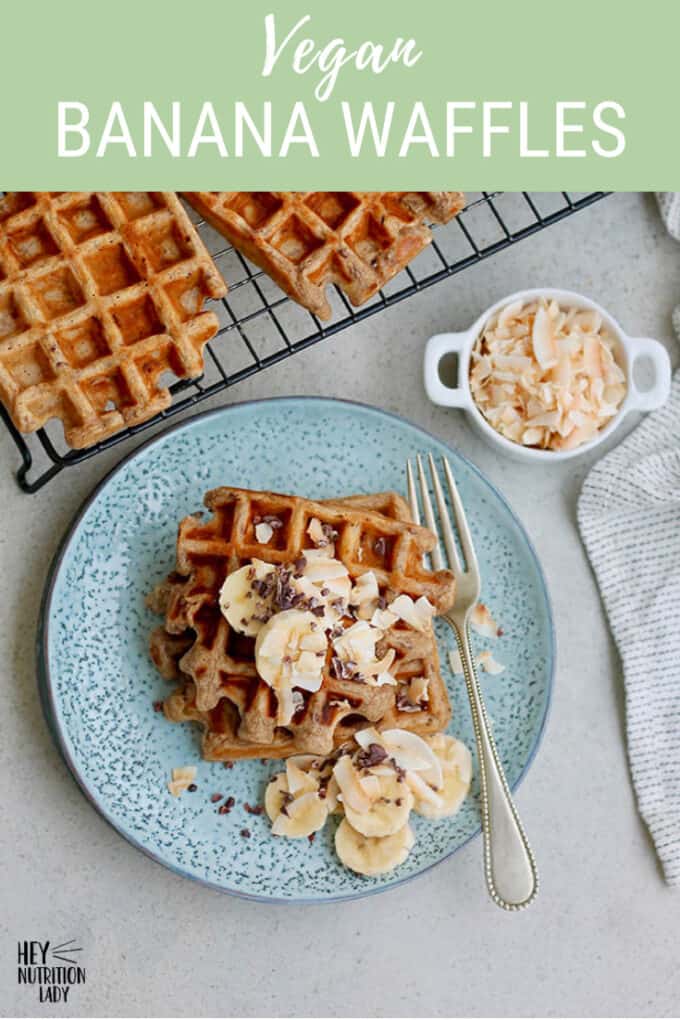 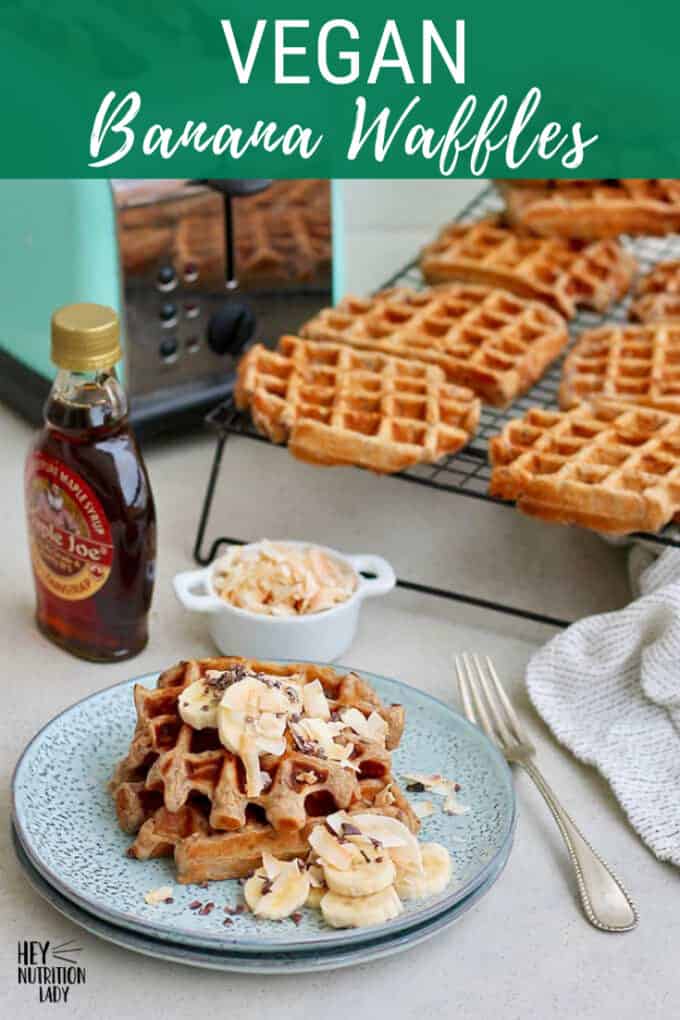 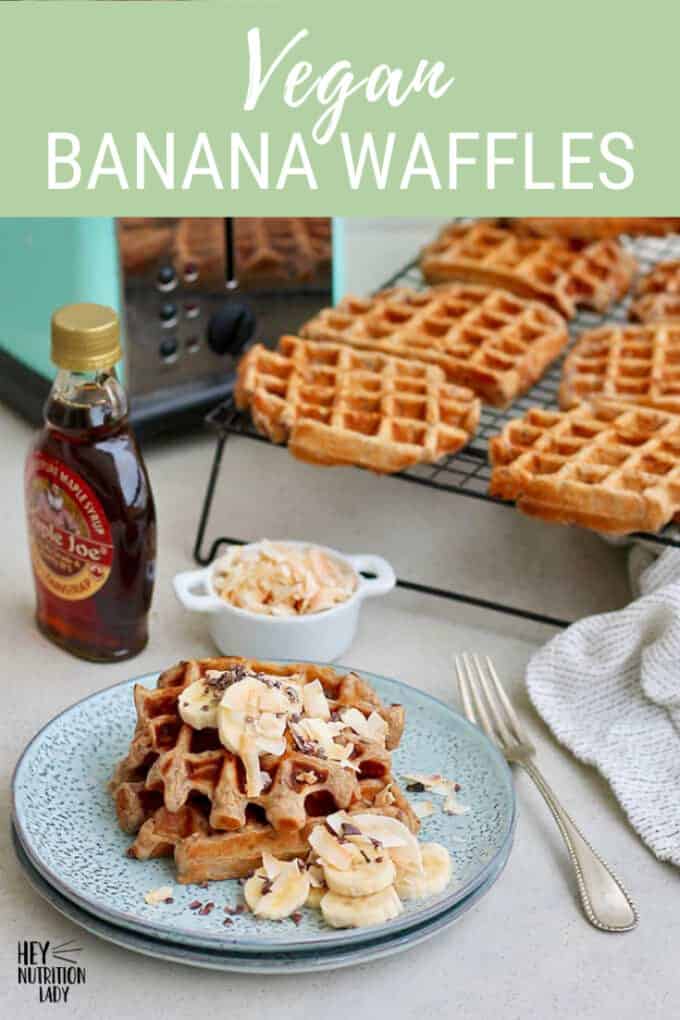 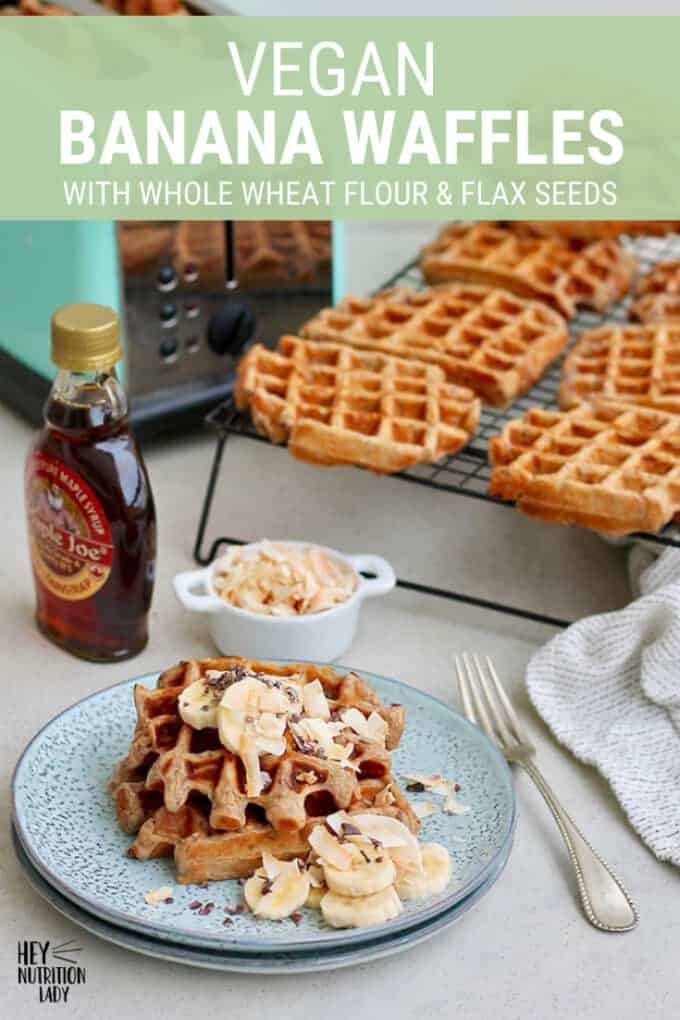 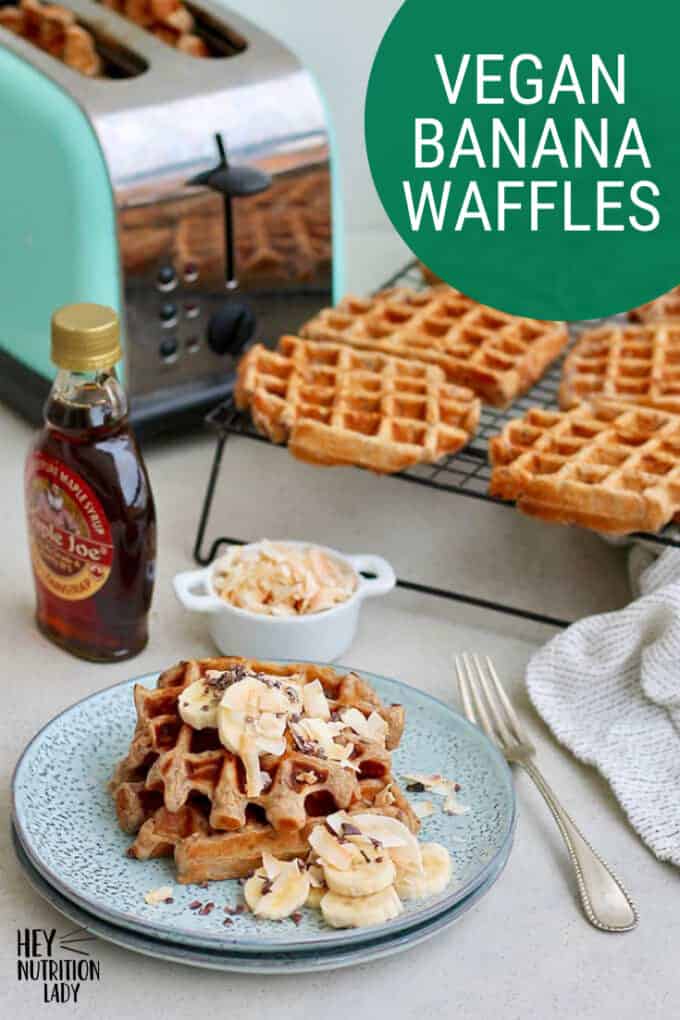 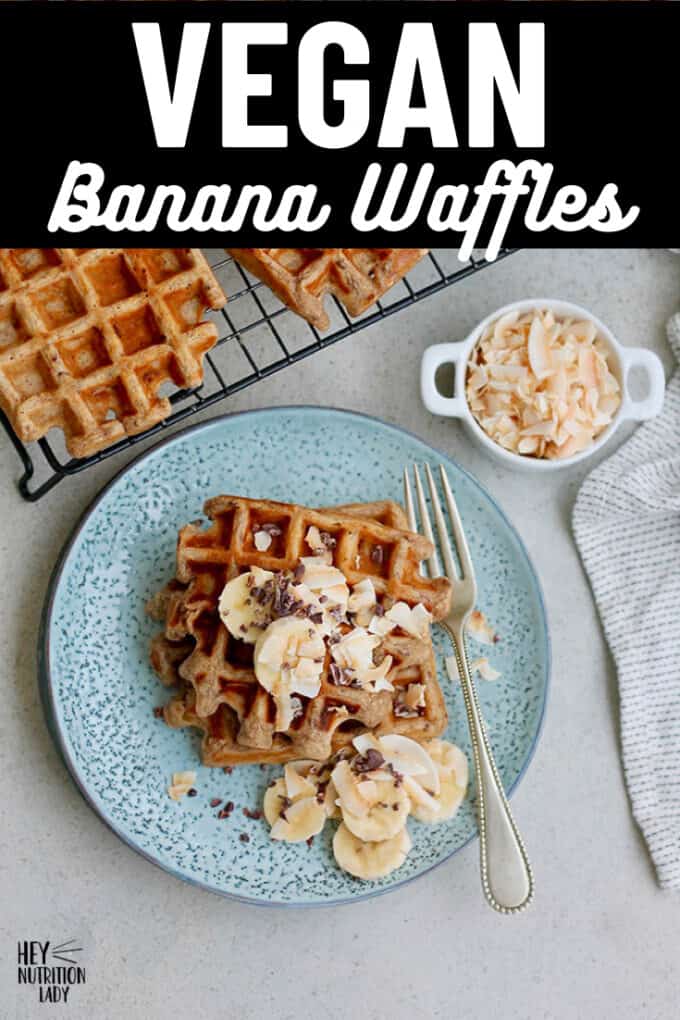 Vegan Banana Waffles! This vegan waffle recipe is easy to make and super healthy. Made with whole wheat flour, brown bananas, and flax seeds, these are perfect to keep frozen and pop into the toaster on a busy morning. 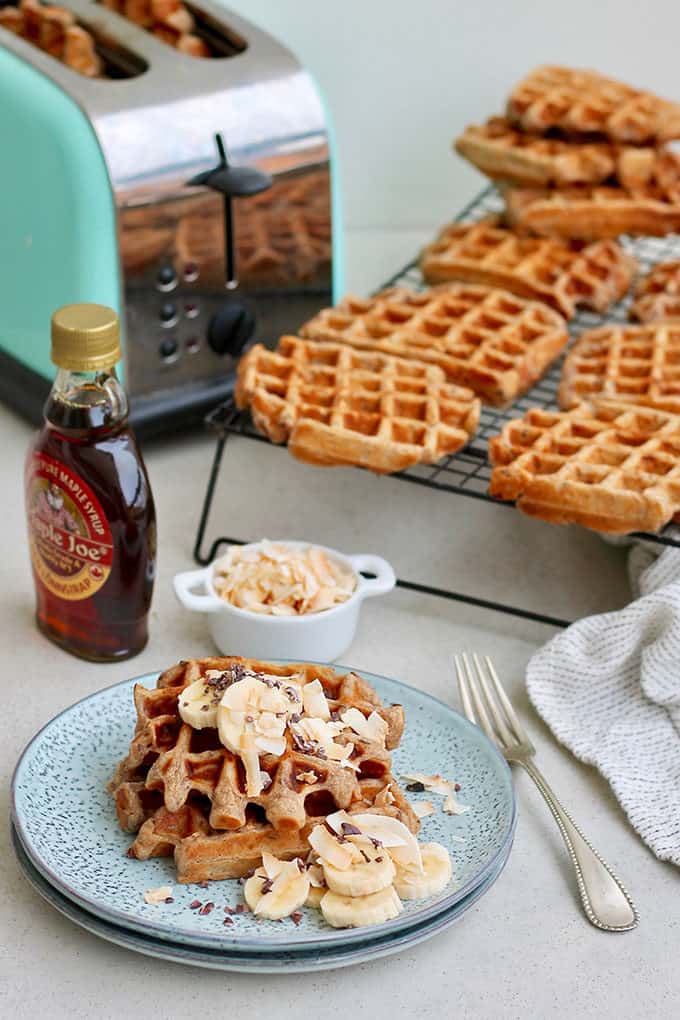 When I worked in an office that had a generous fruit bowl, I used to take all of the bananas home on Fridays so they wouldn't get thrown out by the weekend cleaning crew. I'd peel them and throw them into a freezer bag so they were ready for making smoothies or my favourite Coconut Banana Granola Recipe.

I also regularly make a double (or triple!) batch of this vegan waffle recipe and throw them into the freezer, which makes weekday mornings a breeze.

These Vegan Banana Waffles are made with whole-grain flour, flax seeds, and the brownest bananas you have on hand, so even if it's one of those mornings where I pop my kids in front of the iPad with a frozen waffle (they like to eat them frozen, total weirdos) and lock myself in the bathroom for 5 minutes o peace and quiet (<-- I know you feel me, toddler moms!) I know I've at least done one thing right. 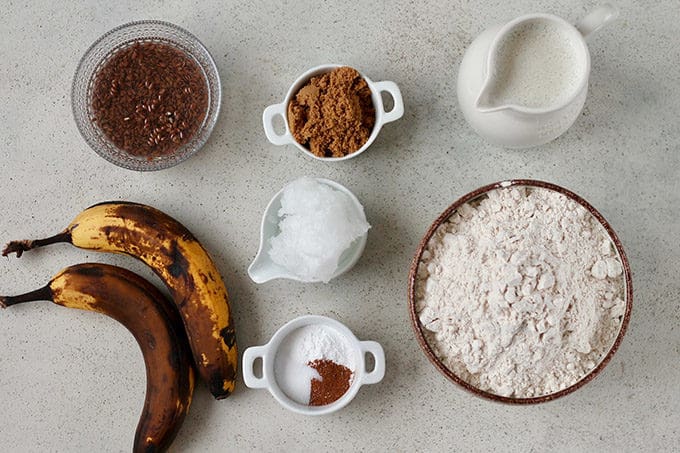 What goes into this vegan waffle recipe?

The ingredient list is short and simple. Nothing weird, I promise!

I think it goes without saying that you're going to need a waffle iron.

My parents have this double waffle iron that flips over and does two big round waffles at a time. I have total iron waffle iron envy.

Mine is a fairly run of the mill waffle iron that produces two square waffles at the time. Not as cool, but it gets the job done. 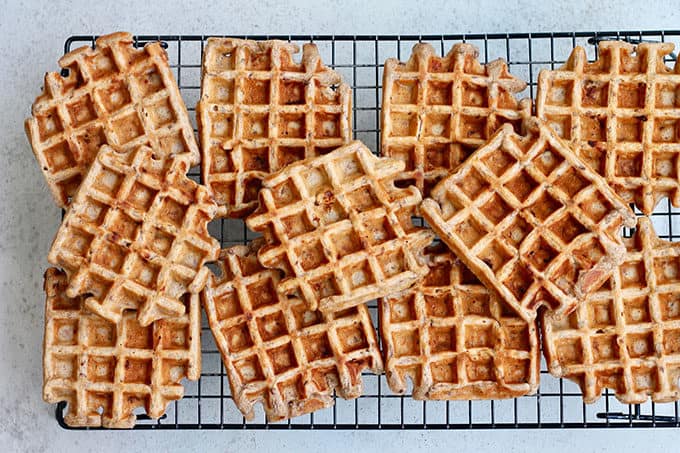 How do you make vegan banana waffles?

If you've hung around here for any amount of time you already know that I'm lazy AF, so of course I've made this vegan waffle recipe using only one bowl. Here's what you're going to do:

Step 1: Mix your flax seeds with a bit of water to get 'em hydrated and form that funky flax-seed gel. Set this aside for 10-ish minutes. (<-- Ok, I lied, this is totally another bowl. But a very tiny one, so we're not going to count it. Details matter, folks!)

Step 2: Grab your brown bananas, and mash them with a fork right in the bowl. Add the brown sugar, melted coconut oil and plant milk, and stir it up good. I use a fork for this job, because I have already dirtied one up mashing the bananas.

Step 3: Add the flax "egg" and mix into the other wet ingredients.

Step 4: Add your whole-grain flour, cinnamon, baking powder, and salt to the top of the bowl. Use your fork to kind of mix the dry stuff together a bit to distribute the cinnamon and baking powder, and then get in there and mix it up with the wet stuff. 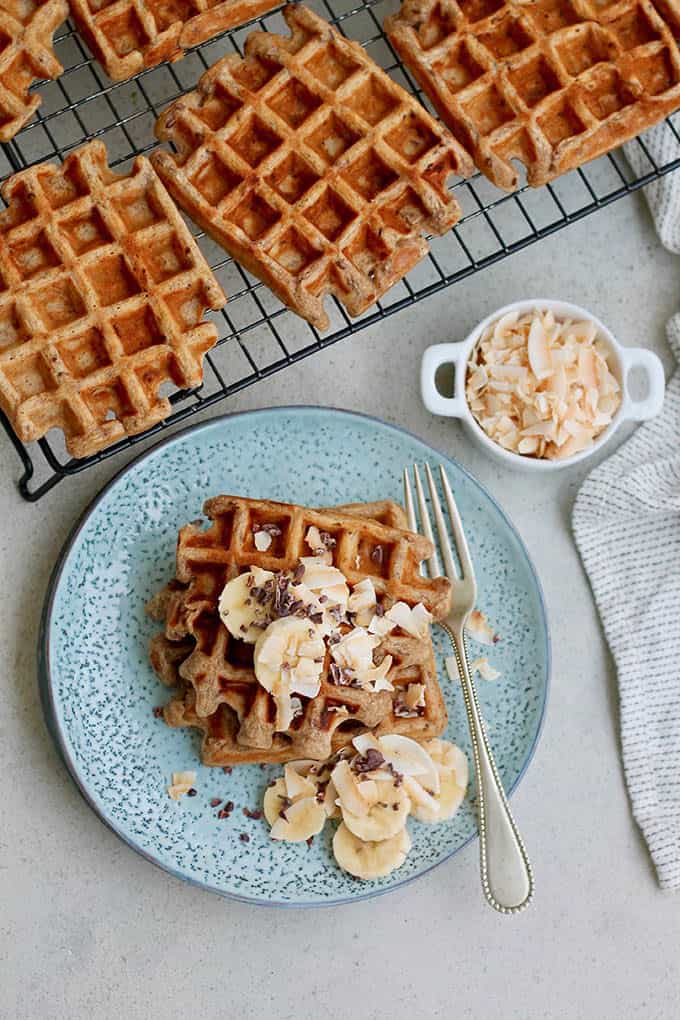 Time to fire up your waffle iron!

Pro tip! One super important thing to note about this vegan waffle recipe is that the flax gel causes the waffles to be prone to sticking to the side of the waffle iron. My recommendation is that you lube up your iron quite well even if it has non-stick plates. I use a silicon basting brush (similar to this one) to brush the plates with coconut oil, and that does a good job.

Use a measuring cup to pour some of the vegan banana waffle batter into your prepared waffle iron (how much you should use totally depends on the size of your waffle iron, but it's better to start with too little and avoid having to clean up a big mess), and close the lid.

Your waffle iron will hopefully have a way to tell you when it's done - mine has a little green light that comes on. If you're going to serve the waffles right away, go for it!

If you're going to freeze the waffles, transfer them to a wire rack until completely cool. 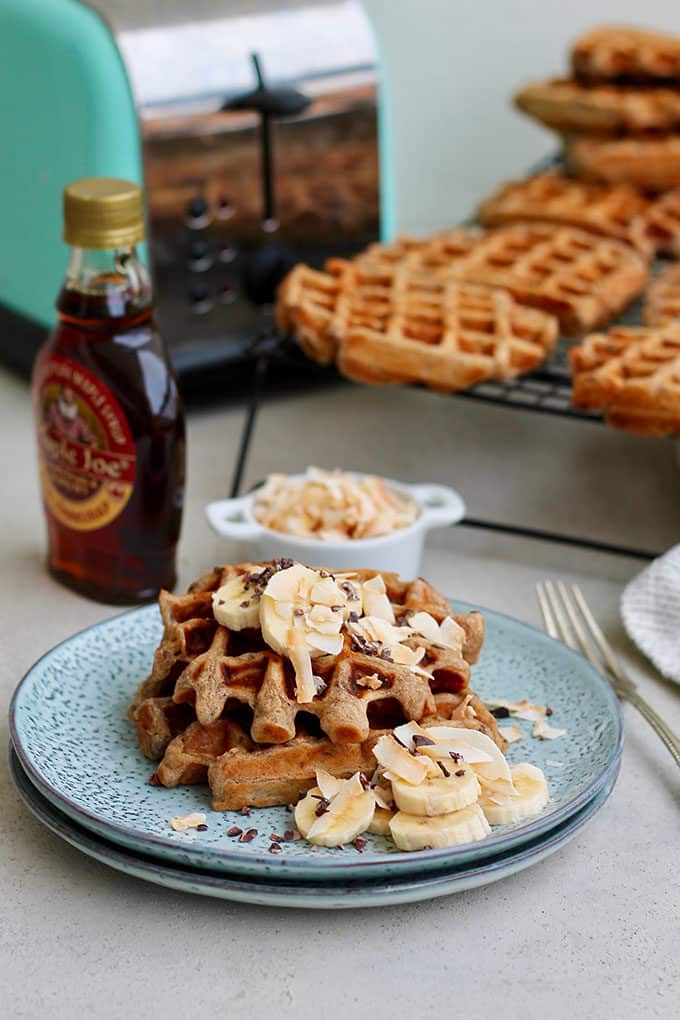 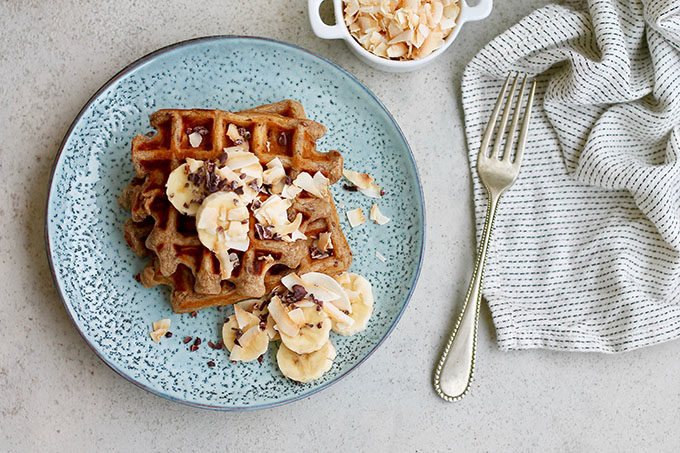 Flax seeds are a nutritional powerhouse. They are extraordinarily high in Omega-3 fatty acids, with just two tablespoons of flax seeds containing over 130% of the recommended daily intake.

Flax seeds are also high in dietary fiber, including mucilaginous fiber, which slows down the emptying of stomach contents into the small intestine and helps improve nutrition absorption in the intestine.

Additionally, flax seeds are rich in the fiber-related polyphenols, lignans, which have been shown to reduce the risk of colon cancer. Flax seeds are a source of magnesium, manganese, and phosphorous. 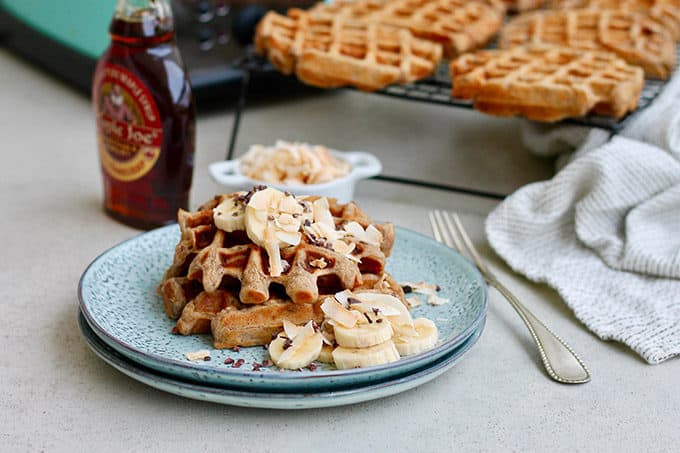 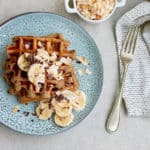