A little while ago, Paul went on a holiday to Morocco. He went by himself, on a solo holiday, a 'Pauliday' if you will. We're very different vacationers, he and I. I'm more of a lie-on-beach-with-book kind of a vacationer, and he's a very activity driven vacationer. When you've lived with someone for nearly 10 years you occasionally want a little time to yourself. And so, because it was a good week for him to go away, and a good week for me to stay home, go to school, load the dishwasher haphazardly, and watch as many episodes of Grey's Anatomy as possible, off he went and home I stayed.

He arrived back home pumped right up about Moroccan food, and brought with him a suitcase full of all kinds of exotic spice blends, oils (olive and argan), dates, nuts, and several miniature tagines. And a bongo drum, which, I don't really know what to say about.

His first weekend back, which seemed like it was the first weekend our schedules had lined up in forever, we made a date to do a much overdue inventory of our spice collection (it's pretty bonkers), and, I made us this salad.

This recipe first caught my attention when Heidi posted it over on 101 Cookbooks, and then again when the cookbook it comes from, Roots, did quite well in Food 52's cookbook battle. The original recipe is for a carrot and chickpea salad, dotted with prunes, lots of mint, toasted almonds, and a fragrant cumin-honey-lemon dressing. Yum. I made it first using dates and almonds and oils direct from Morocco, which was amazing. And I made it first with the carrots sliced into pretty little paper thin coins (using my mandoline), which were nice to look at, but I thought they didn't distribute all that well in the salad.

Since then, I've made riffs on that salad several times. I've moved to shredding the carrots, which is not only easier, but takes care of the distribution issue. I've added chewy and nutty farro, which bulks up the situation into a grain salad and makes it a complete meal. I've used prunes, which I think are better than the dates (Paul, however, strongly disagrees with me on this).

This salad looks like a lot of work, but honestly it comes together really fast. Making the dressing is probably the toughest part (not tough at all) and once that's done it's just tossing everything together in a bowl.

Carrots are an excellent source of beta-carotene, a precursor to vitamin A, as well as vitamin C, and dietary fiber.

Chickpeas are a super food! They’re a very good source of folate, protein, dietary fiber, phosphorus and iron. The fiber in chickpeas is mostly insoluble, which is really good for our digestive tracts.

Farro is a heirloom wheat, originating from Egypt, which is also known as emmer wheat. It is a rich source of fiber, B vitamins, vitamin E and carbohydrates. Recent studies suggest farro is also higher in antioxidants than common wheat varieties. 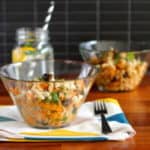 If you have it, a teensy splash of argan oil is nice in this recipe. A little goes a long way, since it's very expensive, and the flavour is strong. If you don't have farro (also known as emmer wheat) you can use wheat berries, barley, or short grain brown rice in it's place. Or, leave the grains out altogether (don't use all of the dressing in that case). If you're going to make this ahead of time, leave the toasted almonds off until you're just about to serve.

Adapted from Roots via 101 Cookbooks