I have this notebook.

It’s old and ratty, butter stained, and filled with the years of this blog. The things I’ve made, the things I want to make, recipes, notes, and post ideas. Sometimes, more often than I’d like, the season gets past me before I manage to post a recipe. My grandmother’s applesauce cake, for example, I’ve intended to post each autumn so far.

It’s funny how a season can go flying by. I can hardly believe we’re into March already and I’ve got just three months to go on my thesis project. 91 days, if you’re counting (I’m totally counting). Spring has its official beginnings in a matter of weeks, and thanks to an unusually mild winter, we’re already seeing signs of life appearing here.

This grapefruit and fennel salad has lived for many seasons in my notebook, so I am unimaginably pleased to finally be sharing it with you all. I’m sneaking it in before the winter citrus disappears for the year (not that anything ever really disappears these days, but you know what I mean), and I hope that you make it because its flavour, bright and fresh, tastes like the changing season.

The salad is a tangle of grapefruit, in careful rounds; fennel, sliced paper thin; and red onions, their bite mellowed with a grapefruit juice marinade. A simple but powerful dressing is made of toasted fennel seeds, grapefruit juice, and olive oil, all bound together with a touch of honey and Dijon mustard.

Not familiar with fennel? It’s a member of the Umbellifereae family, closely related to parsley, carrots, dill, and coriander. All parts of the plant are edible, from the seeds to the feathery greens, and it has a deliciously etherial licorice flavour. Fennel contains a unique complement of phytonutrients that give it strong antioxidant activity. Additionally, the fennel bulb (the part we’re using here) is rich in a type of vitamin C that is directly antimicrobial and vital for proper function and support of the immune system. Perfect for this time of year when the dregs of winter sicknesses are ravaging many of us.

Fennel is an amazing source of vitamin C. It is a great source of dietary fiber, potassium, molybdenum, manganese, copper, phosphorous, and folate. Furthermore, fennel is a good source of calcium, magnesium, iron, and niacin.

Grapefruit, one of the giants of the citrus family, is an excellent source of vitamin C. It is also a great source of carotenoids; a pre-curser to vitamin A. Dietary fiber, potassium, and vitamin B1 round out this nutritional powerhouse. Ruby red and pink grapefruits also contain lycopene (good for your prostates, fellas!). Grapefruits also contain pectin, which is a form of soluble fiber that has been shown to slow down the development of atherosclerosis and reduce blood levels of LDL (bad) cholesterol. 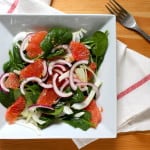 I've used baby spinach in this salad, but I also think that peppery arugula / rocket would work beautifully as well. All of the components of the salad can be sliced, chopped, and whisked in advance and then assembled just before serving.
Prep Time 15 minutes
Cook Time 5 minutes
Total Time 20 minutes
Servings 4
Author Katie Trant