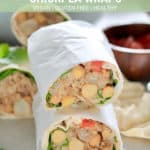 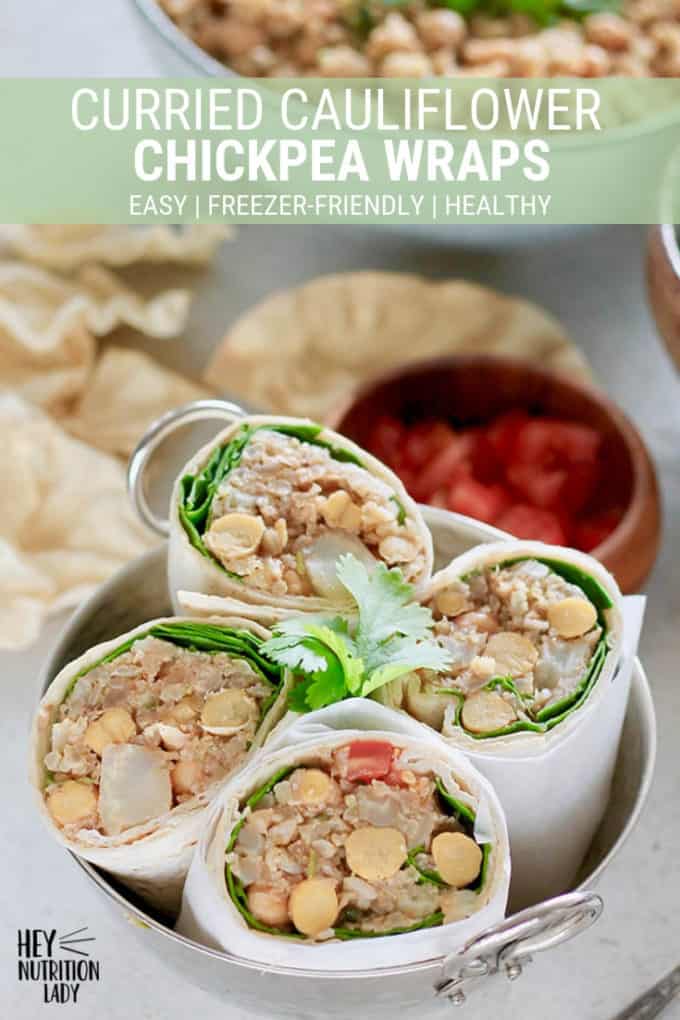 These Curried Cauliflower Chickpea Wraps are a healthy, spicy make-ahead meal! Easily vegan and gluten-free, made with warming Indian spices, these wraps are freezer-friendly to boot! 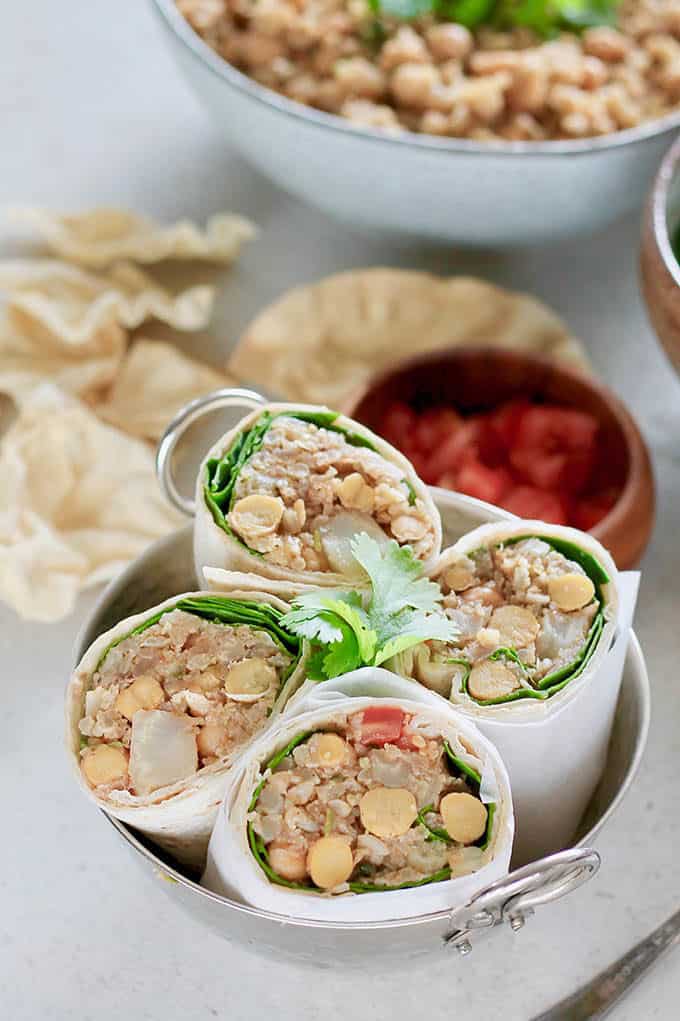 I like carbs – I like them a lot – but I don’t necessarily like carbs on carbs. Like, a side of garlic bread with your pizza? Weird. French fries and pasta? Weird. Or maybe it’s just me?

I should note, though, there was a pizza joint in Vancouver that used to do a spinach fettuccini pizza – yes, that’s a pizza topped with fettuccini – and it was bonkers good. Sat like a brick in your stomach, but man was it ever delicious. Ok, maybe I take it all back…

When it comes to wraps, I find that so often they’re a carb on carb situation… burritos stuffed with rice, and that kind of thing. Although the tortilla is deceptively thin, it packs more of a punch than you might imagine.

I’ve been working on these curried cauliflower chickpea wraps for a while now, and I’m pleased to say that they’re pretty much perfect. They’re kind of like burrito meets samosa, but we’ve replaced the potato that’s typically in a samosa with smashed cauliflower for a wrap that’s way less of a carb-on-carb situation.

Let’s make some Curried Cauliflower Chickpea Wraps, shall we? 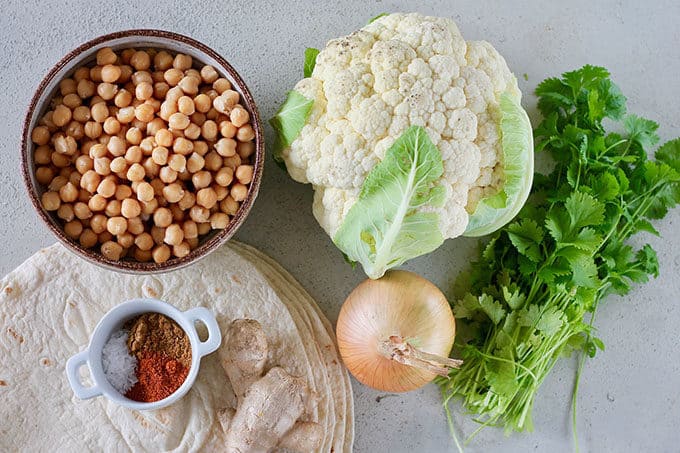 What goes into these wraps?

That’s pretty much it! It’s actually a super basic recipe when it comes down to it. 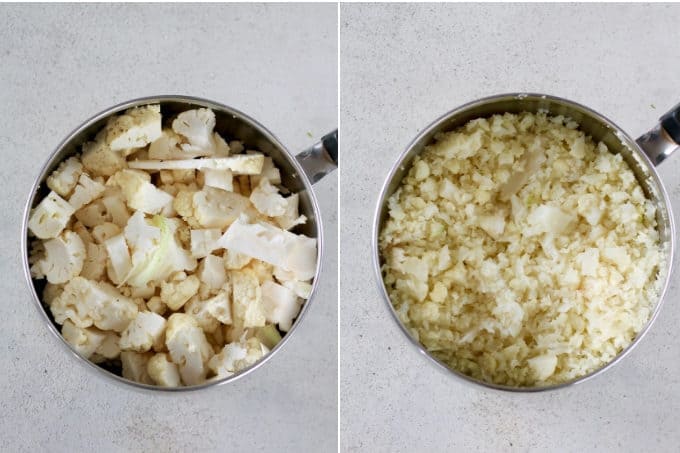 How do you make curried cauliflower chickpea wraps?

We’re going to start by mashing the eff out of some cauliflower. Well, maybe not the eff, we do want some texture. But it gets steamed and mashed and that’s the base of things.

Then you’re going to sauté the onion in a big pot, and after it gets a bit browned you’ll chuck in the ginger and spices.

In goes the mashed cauliflower, the chickpeas, and a good amount of cilantro.

THAT’S IT! Your filling is done and you’re ready to roll! 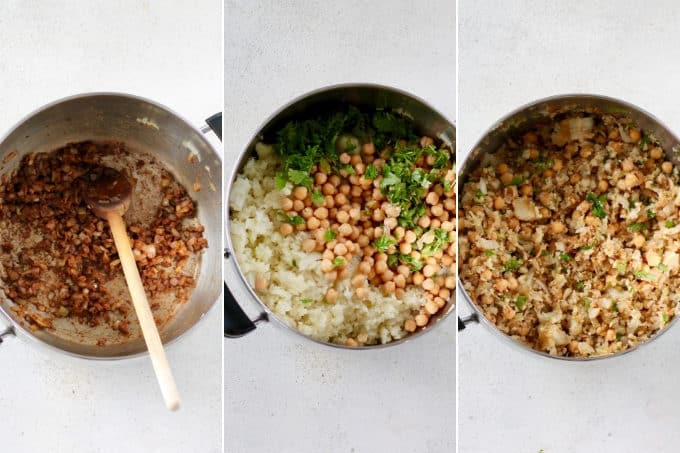 Listen, if wrap rolling stresses you out, feel free to freestyle the situation. Or just put the filling and wraps and accoutrements out on the table and tell your people to get off their lazy butts and roll their own wraps. What are you, their mother?

If you *are* planning on bulk-prepping these wraps, and in particular if you’re going to freeze them, you’re going to need to brush up on your wrap rolling skills. Here’s a handy wrap-rolling tutorial to get you started. 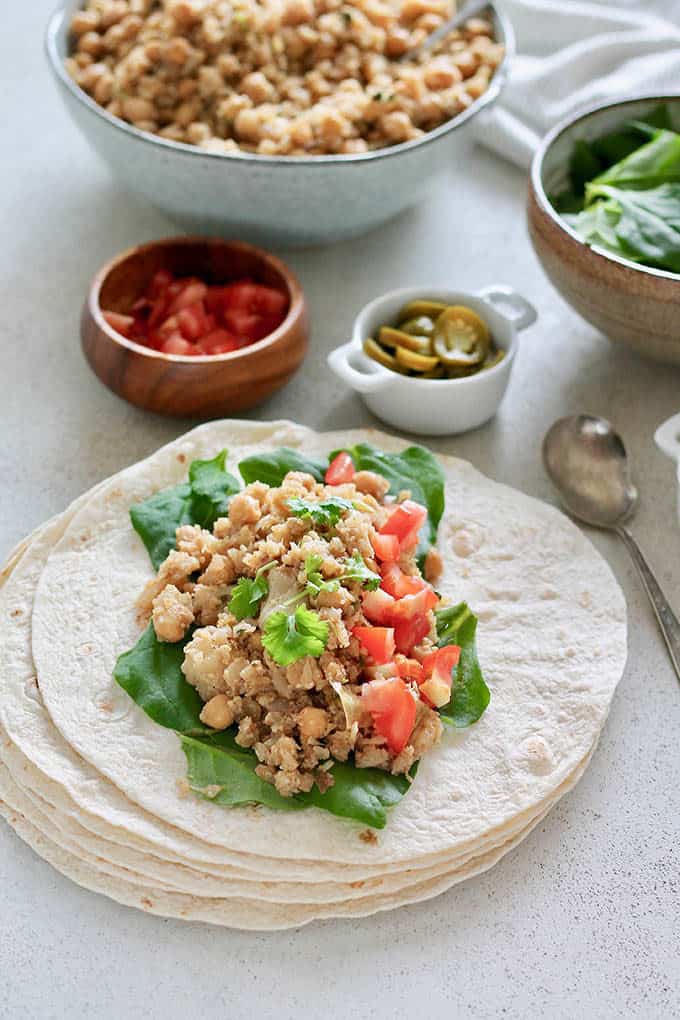 Like most of my wraps, these can be made in advance and tossed in the freezer. That’s where 4/6 of these wraps are right now.

To pack them for lunch you simply pull a wrap out of the freezer the night before (or morning of) and when lunch time rolls around you can either eat it at room temp, or remove the foil and give it a quick zap in the office microwave.

I’ve served these with a delish garlic yoghurt sauce, which is great for dipping. For packed lunches you can either tuck a small container of the sauce alongside your wrap, or, if you’re freezing the wraps, begin each wrap with a slick of the sauce on the tortilla before the cauliflower filling goes down.

The curried cauliflower chickpea filling is 100% vegan and gluten free. If you want to keep your wraps totally vegan, skip the garlic yoghurt sauce I’ve served them with, or replace the yoghurt with a vegan alternative like cashew cream.

If you’re gluten free, see if you can get your hands on some nice big gluten free wraps, and you’re in business. 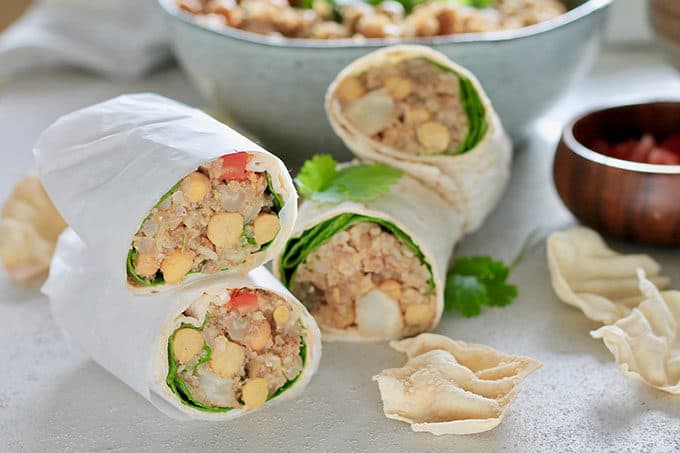 Why is there no curry powder in these curry wraps?

Excellent question, and one that comes up a lot. Very few authentic Indian recipes actually call for curry powder, the curry comes from in the blend of spices in this recipe.

Can this recipe be made gluten free?

If you use gluten-free wraps, you’re in business!

Is this recipe vegan?

It’s totally vegan EXCEPT for the garlic yoghurt sauce. If you’re vegan you can leave that out, sub in plant-based yoghurt, or make a cashew cream instead. You’ve got options!

How far in advance can I make this recipe?

The cauliflower filling will last for 3-5 days in the fridge.

Is this recipe freezer-friendly?

You bet it is! Just wrap the wraps in foil or plastic wrap and toss them into the freezer. They’ll be good for up to 3 months. 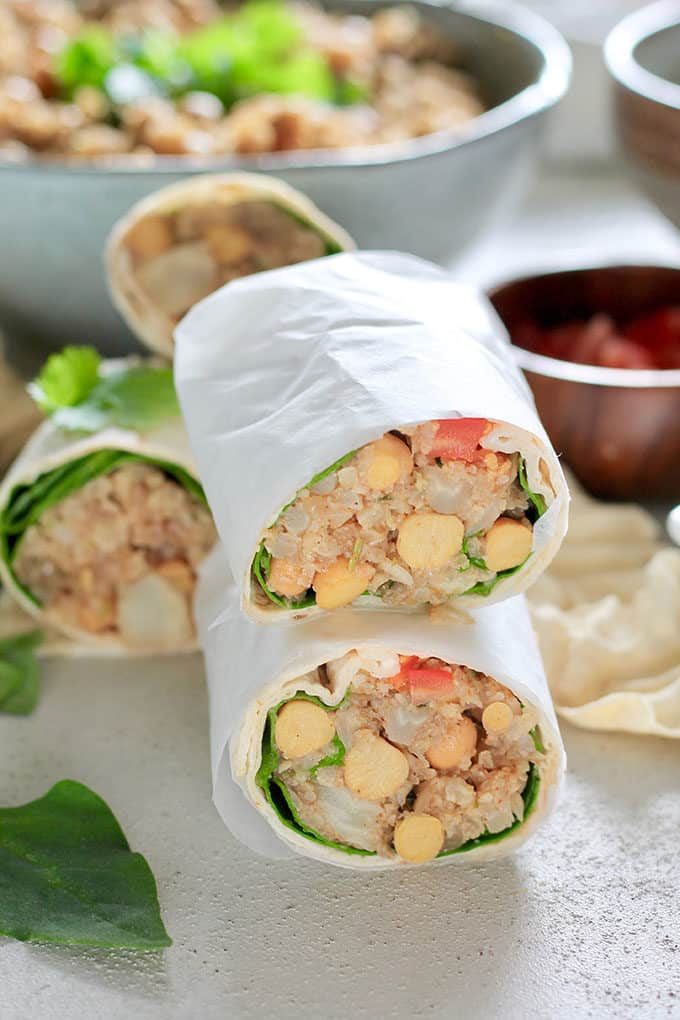 Cauliflower is a cruciferous vegetable, in the same family as broccoli, kale, and cabbage, with antioxidant and anti-inflammatory health benefits. Cauliflower is an excellent source of vitamin C, vitamin K, and folate.

It is a great source of vitamin B5, potassium, dietary fiber, and a good source of protein, phosphorus, magnesium, vitamins B1-3, and iron.

Chickpeas, aka garbanzo beans, are a super food! They contain about 12.5 grams of fiber per cup, which is 50% of the recommended daily intake of dietary fiber.

About two-thirds of the fiber in garbanzos is insoluble, which is great for digestive health, particularly in the colon. The remaining third is soluble fiber, which can help lower our LDL-cholesterol, total cholesterol, and triglycerides; important for cardiovascular health.

Chickpeas are notable for antioxidant nutrients like vitamin C, vitamin E, and beta-carotene, but also contain concentrated supplies of antioxidant phytonutrients such as flavonoids and polyphenols. 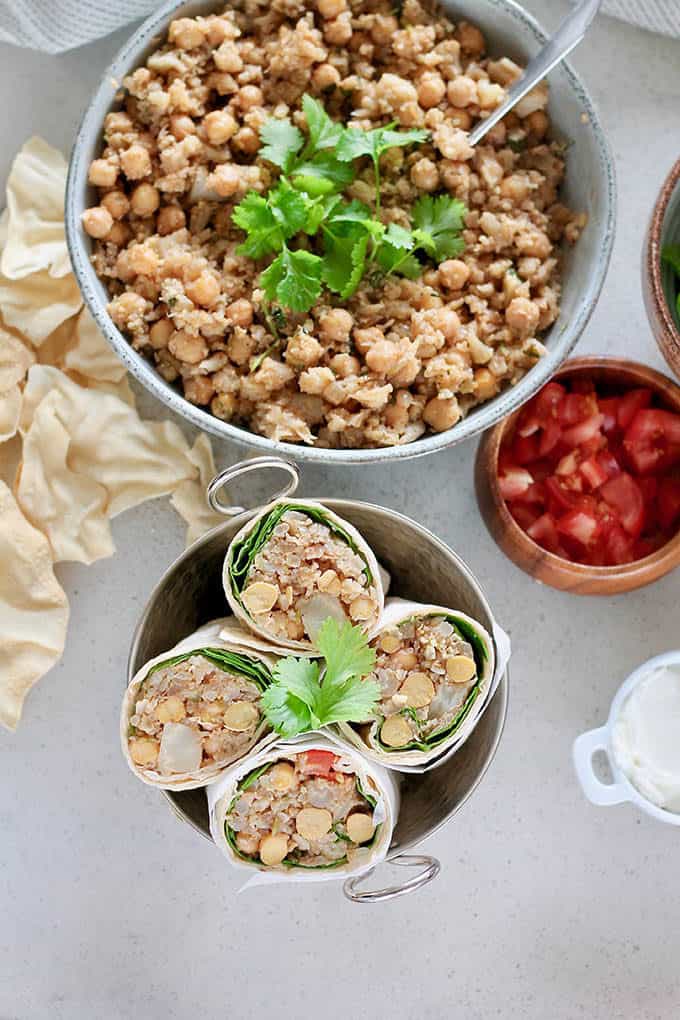 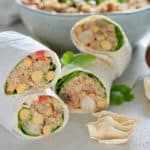 This recipe was originally published March 5, 2015. It was retested, re-photographed, and most recently updated on November 9, 2018.