Happy Canada Day to all of my fellow Canadians all around the world!

I thought we should have something Canadian today, and what’s more Canadian than bacon? Maple bacon! You know, the real maple kind…

So, coconut bacon. Does it taste like bacon bacon? To be honest, I have no idea. I haven’t had the real thing in over 2 decades, so bacon bacon is a foggy memory at best. But I can assure you that coconut bacon is good. Really, really good.

I used to be really into fake meat products and there was a soy Canadian bacon that I was particularly fond of. When I started my first degree in nutrition I realized how processed those fake meat products really are and have more or less eschewed them ever since. I do still indulge in them from time to time (hello, veggie pizza pepperoni), but only as an occasional treat.

A friend asked me the other day how I define real food, and after some consideration my answer is that real food is either a whole food or food that is or that can be made by human hands. I could make my own tofu, I could make my own seitan, but making my own soy bacon would be tricky. Coconut bacon, then, is a game changer.

Since coconut is naturally fatty it crisps up nicely in the oven. The smoky flavour comes from a mix of liquid smoke and smoked paprika, which balances the saltiness of liquid aminos (or soy sauce) and the sweetness of good quality maple syrup.

Best of all, making your own coconut bacon is so dang easy. It’s a matter of mixing just five ingredients together, and then baking those ingredients in the oven. Be warned that coconut bacon is a bit of an attention seeker, so you’ll need to be available to stir the tray every five minutes and to watch it very carefully towards the end. Your efforts will be worth it though, as you’ll end up with a big old tray of salty, smoky bacon. The real maple kind, eh?

I'll be back later this week for a recipe that uses some of this coconut bacon. Yum!

So what's the deal with liquid smoke? Chips or sawdust from hardwoods such as hickory or mesquite are burned at high temperatures, and particles of the smoke are collected in condensers. The resulting liquid is concentrated down for a stronger smoky flavour. Not all liquid smoke is created equal, so read your labels! It shouldn't contain anything other than natural smoke and water, so be wary of those that add additional flavour, colour, or other ingredients. 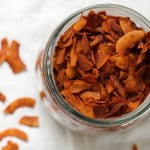 There are a lot of coconut bacon recipes floating around and they all look very good. It's important to note that not all liquid smoke is created equal, so you may want more or less depending on how smokey it is. Mine was made from hickory smoke and a tablespoon was sufficient for a nice and smoky flavour. You can also dial back the maple syrup if you'd prefer your coconut bacon a little less mapley.
Prep Time 5 minutes
Cook Time 20 minutes
Total Time 25 minutes
Author Katie Trant