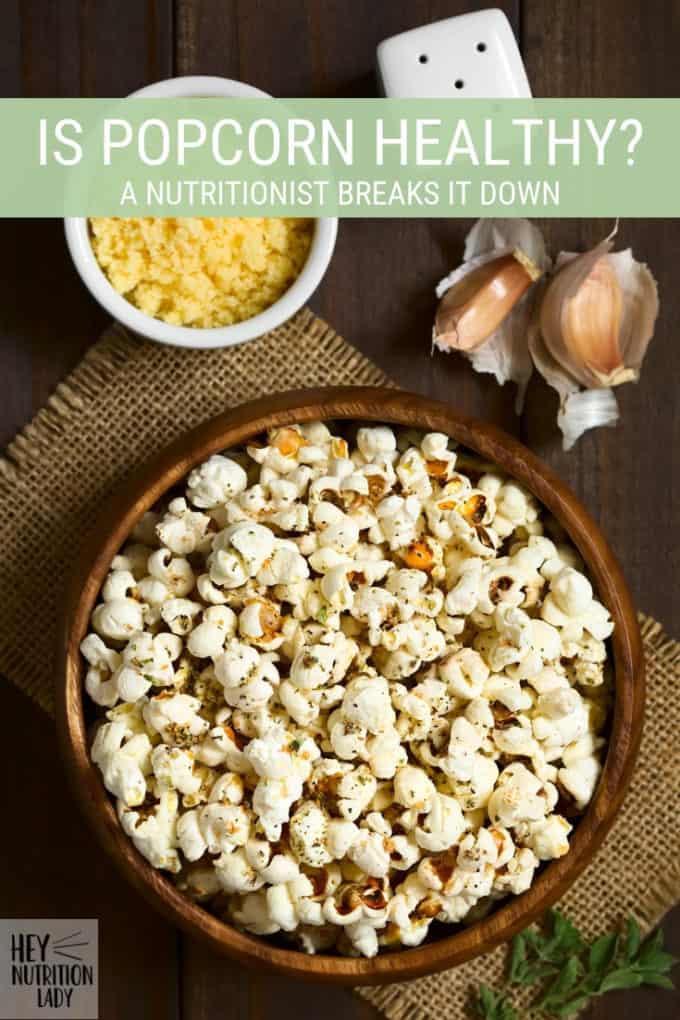 Is Popcorn Healthy? Get the lowdown on whether or not popcorn is a good snack, the best ways to pop popcorn, and whether not not microwave popcorn is good for you. Let's get popping! 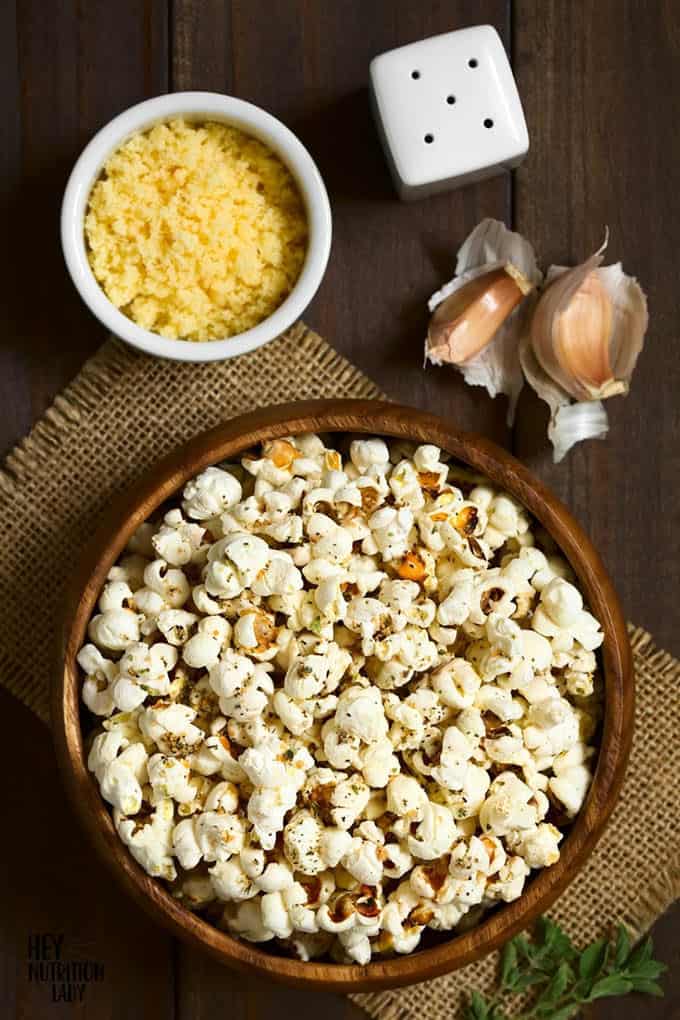 We're big time popcorn lovers in our family. It's our salty snack of choice, and my husband, who is the master popper in our home, pops up a huuuuuge batch of popcorn a couple of times per week.

So here's the million dollar question: Is popcorn healthy? Well, yes. And no. Let’s break it down.

Popcorn is one of six types of corn cultivated around the world today. It’s scientific name is zea mays everta, and it is the only type of corn that will pop when heated. The ability to pop stems from the moisture content inside the kernel, which for popcorn is around 14%.

Popcorn is an intact whole grain, which means that the bran, the germ, and the endosperm are all intact within the kernel. Popcorn is high in fiber, particularly insoluble, which is kind of like a cleanup crew for your digestive tract. It’s also a good source of vitamin C, B3, and manganese.

In it’s purest form, air-popped popcorn is a healthy whole grain snack which per 1 cup has about 31 calories, 1 gram of protein, 6 grams of carbohydrate, 1 gram of fiber, and only trace amounts of fat.

The nutritional value of oil-popped popcorn varies depending on the type and quantity of oil used to pop the corn. Oils that have high smoke-points are preferred as they won’t break down or oxidize as readily during the popping as would oils with a low smoke-point.

What kind of oil is best for popping popcorn?

Canola or coconut oil are good choices. Olive oil has a lower smoke-point and breaks down easily when heated so it is a poorer choice nutritionally. (Real talk: I pop my corn with olive oil all the dang time. I just like the flavour.)

A tablespoon of vegetable oil has about 115 calories and 15 grams of fat, so if you’re popping half a cup of popcorn kernels (which, according to popcorn.org, becomes about 16 cups of popped corn, although personal experience tells me it's about half that) in 2 tablespoons of oil it works out to about 40 calories and 1 gram of fat per cup of popped corn.

But we still haven’t put anything on it! I like my popcorn with melted butter, nutritional yeast, and Old Bay seasoning on it. Yum! Say we melted ¼ cup of butter to drizzle on that 16 cups of popcorn. We’re adding about 400 calories and 45g of fat in all, so our popcorn is now 65 calories and 4 grams of fat per cup.

That still doesn’t sound so bad, but I know that I can take down half of that batch of popcorn no problem, which means my snack has just added up to over 500 calories and 64 grams of fat. And we haven’t talked about sodium yet. It adds up quickly! 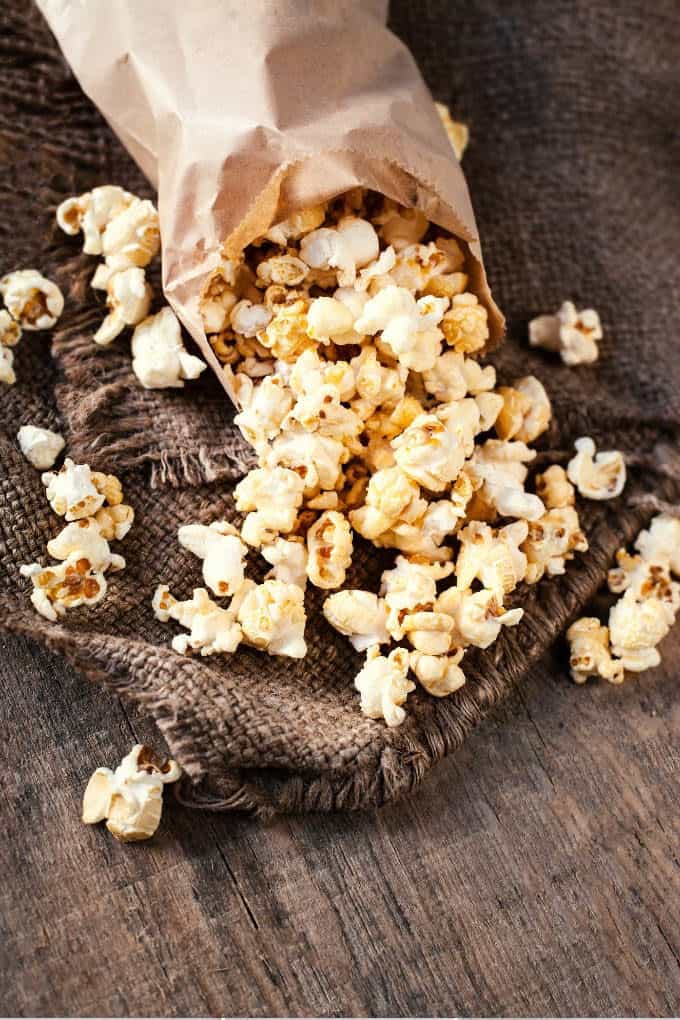 Is popcorn a good snack?

In my house we usually only enjoy delicious buttery popcorn as a treat on the weekends, but if popcorn is a daily snack for you, air-popped is the way to go. With the fiber and nutrients popcorn is bringing to the table, that buttery bowl of corn is still a better choice than opening up a bag of chips.

Air-popped popcorn would make a great every day snack, as would oil-popped if you kept it bare naked. The buttery stuff should be a moderation situation.

Is microwave popcorn bad for you?

Wellll, this is where things start to fall apart. There are two main problems here: the bag, and the contents.

The bag that almost all microwave popcorn brands use is lined with perflurooctanoic acid (say that five times fast). This is the same toxin found in teflon non-stick pans. PFOA can stay in the environment and the human body for long periods of time.

When heated, this chemical has been linked to infertility, cancer, and other diseases.

What’s in the bag isn’t much better. It changes from brand to brand, but a quick skim of ingredients lists from some of the major brands reveals a slew of added oil included hydrogenated vegetable oils (trans fats) salt, artificial flavour and colour, and preservatives.

Have you heard of popcorn lung? That artificial butter flavour is so toxic it has been linked to bronchiolitis obliterans, a rare, life-threatening, and irreversible obstructive lung disease.

This was previously thought to only affect factory workers who were inhaling air-born diacetyl in that buttery flavour, but in 2007 a heavy consumer of microwave popcorn (2 bags a day) became the first public consumer to be diagnosed with popcorn lung.

This certainly isn’t to say that the occasional bag of microwave popcorn is going to kill you, but keep it as an infrequent treat and don’t inhale when you open the bag!

Should I buy organic popcorn?

Does organic matter? Again, yes and no.

If you’re worried about GMOs then there’s good news! According to GMO expert Jeffrey Smith (executive director of the Institute for Responsible Technology), although almost 90% of the corn grown and eaten in the US is GMO corn, popcorn comes from a different seed and has not been genetically modified. Yet.

Buttt, if you want to ensure that your popcorn is free from pesticides, herbicides, fungicides, fertilizers, and other chemical residues, then organic is your best bet. The good news is that organic popcorn still works out to mere pennies when you pop it at home.

Popcorn is a healthy whole grain and can be a totally nutritious snack. How you pop it and how you top it will of course influence the overall nutritional value.

Air-popped is the best choice but oil popped isn’t far behind. Be conservative with the butter or oil toppings, and avoid frequent consumption of microwave popcorn. 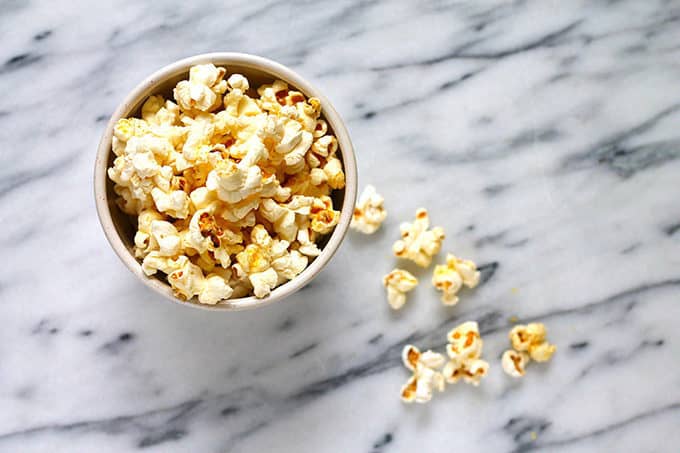 This post was originally published June 19, 2014. It was edited and updated on January 17, 2019. Some of the photos in this post were purchased from Canva.