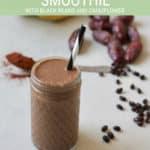 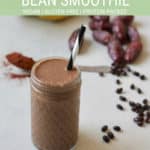 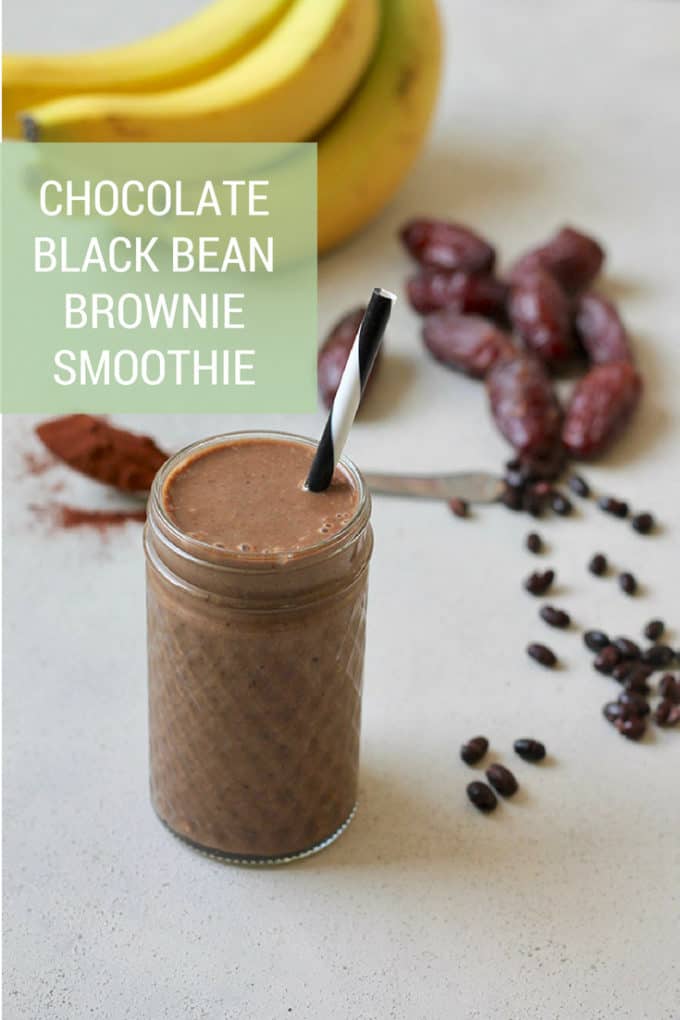 A rich and creamy healthy chocolate smoothie loaded with protein thanks to a secret ingredient that you totally can’t taste – beans! It’s like a chocolate protein shake but made without any weird ingredients. Naturally sweetened with just banana and dates, this bean smoothie is totally vegan and dairy-free, and I promise it’s delicious!

This post contains affiliate links. As an Amazon associate, I earn from qualifying purchases. 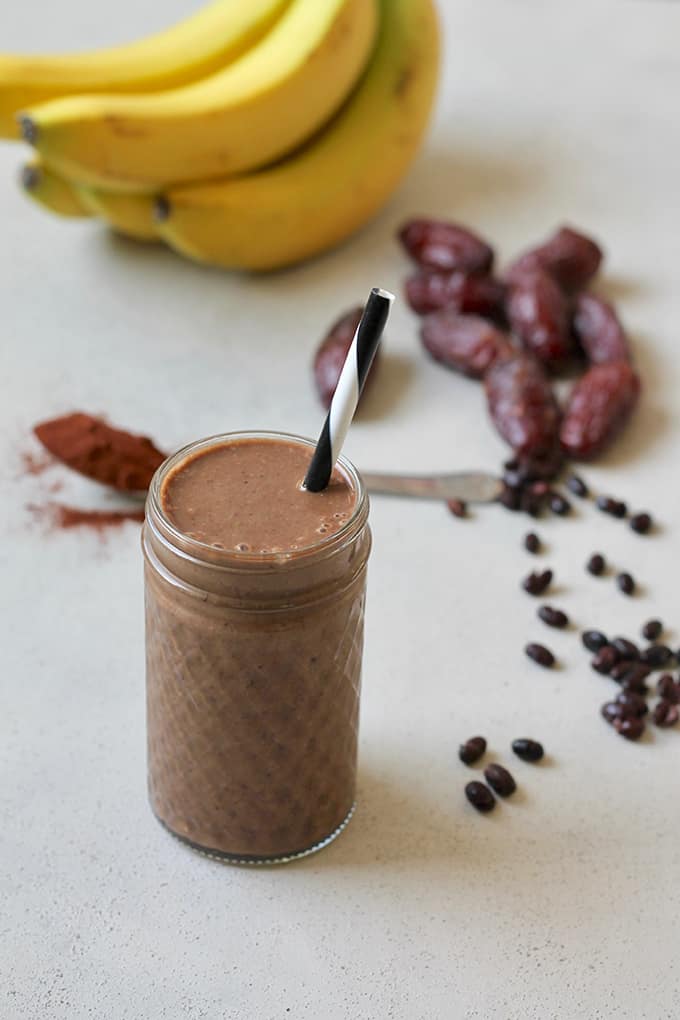 Whether you’ve been here for a while or you’re brand new, I want you to do something for me.

Cross your arms across your chest.

I promise I’ll catch you.

That’s right my friends, we’re doing trust falls today. Trust falls right into putting beans in your smoothies, and I promise that I’ll catch you.

Unless of course you consider putting beans in your smoothies weird, and then I guess it has weird stuff in it. I’m ok with it!

If you’ve ever had some hippy dip friend who tried to pass off a tray of bean brownies as a dessert, that friend will love this smoothie. (Ps – I am totally that friend. Check out my Fudgy Adzuki Bean Brownies.) 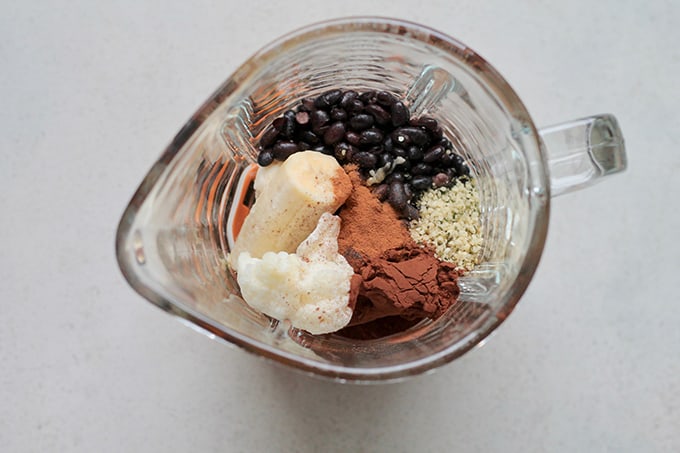 What goes into this healthy chocolate smoothie?

I like to call this my Chocolate Black Bean Brownie Smoothie. It tastes like you’re drinking a brownie, but is so hella delicious you won’t even believe it. You’re gonna need the following:

Can you taste the beans?

This is a bean smoothie, but cross my heart and hope to die, you can not taste the beans. They just blend up creamy and delicious and are totally disguised by the other delicious flavours.

You can’t taste the frozen cauliflower either, if you’re worried about that. It adds bulk, dietary fiber, and makes this chocolate smoothie icy cold and refreshing.

Hemp seeds add another boost of protein, and sweetened with just a frozen banana and a couple of medjool dates (one is perfect for me, but you can add two if you prefer things to be on the sweeter side), this healthy chocolate smoothie is vegan, naturally sweetened, and naturally protein-rich. It’s great for practically everyone! 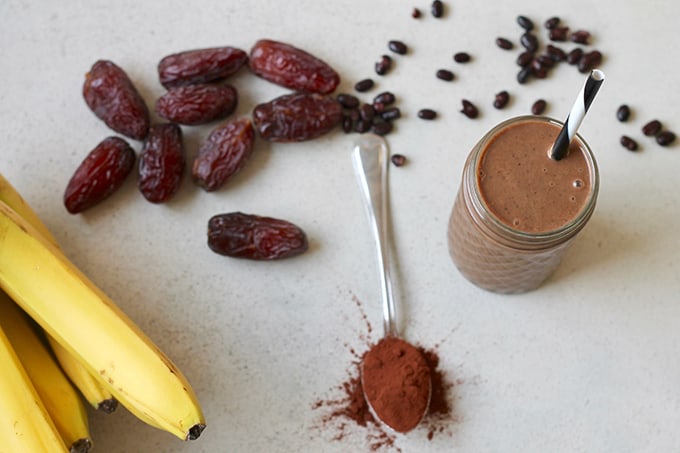 Can I make this smoothie in advance?

You bet you can! This Chocolate Black Bean Smoothie recipe is a great option for Frozen Smoothie Packs.

You can also blend it up and keep your smoothie in the fridge for a few hours. It might separate a bit so you’ll want to shake or stir before you drink it.

What kind of milk should I use?

I used almond milk when I first started making this smoothie, but these days my plant-based milk of choice is oat milk, so that’s what I use more often than not. Any plant-based milk that you’re into will do just fine.

Do I need a fancy blender?

The best blender is the blender you have… that’s how the saying goes, right?

To be honest, I’ve made this smoothie in a variety of blenders ranging from not that fancy to fancy AF, and the main difference is the smoothness of the drink. If you have a less powerful bender you may find a few chunks of cauliflower or dates left behind, but that’s not a big deal.

The protein-plus-fiber combination in black beans is one of the things that makes black beans so special. A one cup serving contains 15g of fiber (over half of the daily recommended intake), and 15g of protein.

Much of the fiber is indigestible, which supports digestive health, particularly in the lower part of our digestive tract. The protein-fiber combination is also key in stabilizing blood sugar levels, as both protein and fiber move through our digestive systems at a moderate pace. This is especially important in a drink like this healthy chocolate smoothie.

Black beans are also rich in soluble fiber, which is helpful for lowering blood cholesterol levels and supporting cardiovascular health. 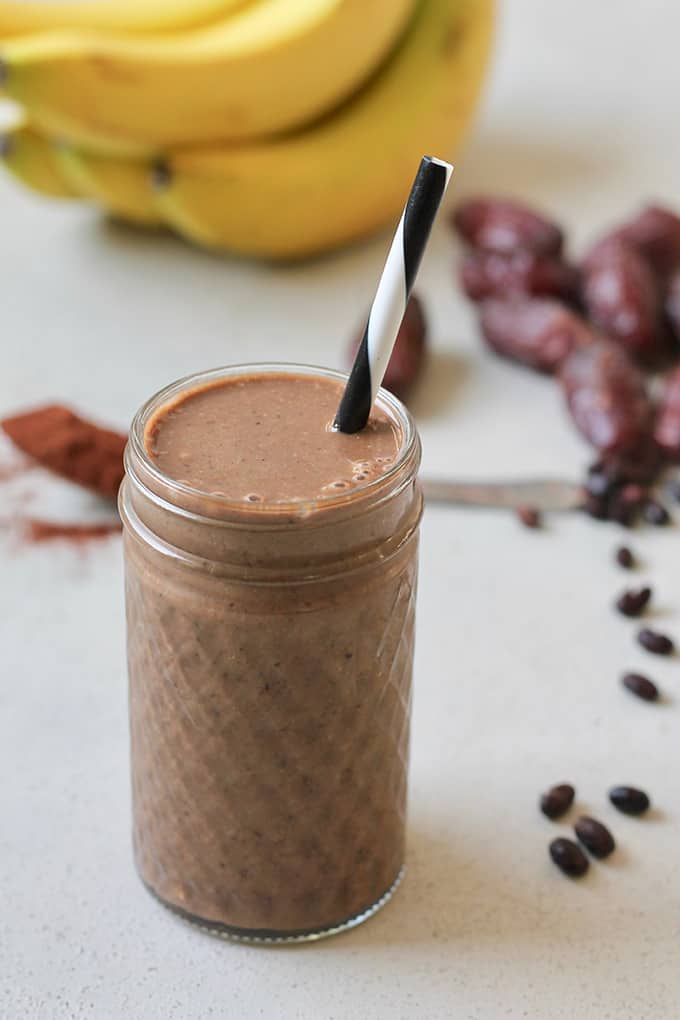 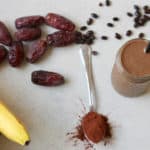 Date Almond Smoothie
This creamy dreamy smoothie is thick and luscious like a milkshake, yet totally plant-based and packed with veggies. Naturally sweetened with frozen banana and dates, nutty and delicious, this is just the thing when you want something sweet but healthy.
Check out this recipe