This post contains affiliate links. As am Amazon associate I earn from qualifying purchases.

I'm in the process of getting my Swedish driver's licence, which is a major pain in the butt to say the least. I'm not new to driving - I got my Canadian licence in 1996 or so - but since I come a non-EU country it's not a simple matter of switching it over. I have to do the whole thing from the beginning as if I'm a brand new driver. 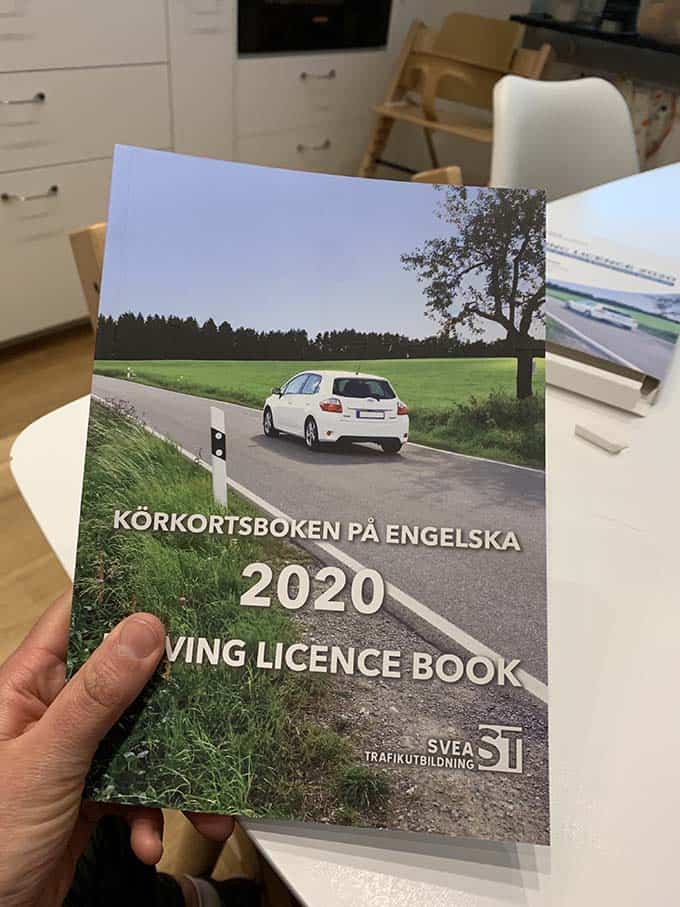 the bane of my existence

I've avoided doing this for as long as possible; we don't own a car in Stockholm and bike or take public transit everywhere, so the only time I really need to drive is when we go back to Canada each summer. But I can't renew my Canadian licence anymore as a non-resident, so I need to get a Swedish licence so I can drive in Canada. It also opens up possibilities to rent a car when we go on vacations, but that's not exactly top of mind these days.

Anyways, a friend of mine - a fellow Canadian who has also been driving for 20-ish years - bought a house in the suburbs outside of Stockholm where she'll need to get a car, so we've been going through this ridiculous process together (although I must say, she's a lot more committed to it than I am at this point).

I'm the last of our group of expats to get my licence. Among our group, all of us are long-time drivers and most of us have advanced degrees. Still, with only a couple of exceptions, everyone has failed either the theory test or the practical on the first try. One of my friends who has *two* advanced degrees considers his Swedish drivers licence among his greatest accomplishments. That is to say, this process is a total pain in the butt.

The process begins with taking two "risk" courses, the first of which (risk one) is in a classroom where you discuss things like drug and alcohol use, tiredness, and distracted driving. The second (risk two) involves going out to a closed driving track in the suburbs where you learn what it feels like to drive on ice and how long it takes to stop in different conditions at different speeds.

I kept waiting for the courses to be cancelled due to corona, but, as with most things in Sweden, they carried on with some restrictions. The classroom course, which I took back in March was boring AF. Earlier this week I took the second course, and I must say, it was pretty fun.

The worst part was being bussed out to the driving course. The school we booked through said they'd take us out there in their own bus, but it was actually a 9-seat van with 7 occupants in it. When the driver opened the door to let more students in I asked him how in the heck we were supposed to stay 6 feet apart, and he just smiled and shrugged.

My friend wore a mask in the van and I had a bandana thingy to cover my face, but I lasted about 45 seconds with it on and became so claustrophobic I had to take it off. I packed hand sanitizer and sanitizing wipes, and used them on everything I touched. Nobody else seemed too concerned about it.

At the driving course, after a brief classroom lecture they put us each in a car with a walkie talkie, and had us drive at 50, 70, and 90 km/hr and then slam on the brakes with the goal of stopping at a set of cones. We then repeated the exercise driving over a stretch of rubber with sprinklers running on it, to mimic what it would be like to hit the brakes on an icy road.

The crazy thing about this course is that there are no prerequisites. You could literally have never driven a single time, and they'd put you in your own car and let you have at it. It seemed that most of the students had taken at least a few lessons, but wow.

It also kind of blows my mind that there isn't any of this sort of comprehensive driving training in Canada. We of course had theoretical lessons about how long it takes to stop at certain speeds, but nobody ever put is into a car and had us actually experience it. Maybe this has changed in the 25 years since I first got my licence? Not sure.

Anyways, I still have the hardest parts ahead of me, and seriously need to prioritize studying for the theory test and taking a few lessons to help me pass the practical. Some rules are different here, and they also grade you on "eco driving" which is things like hitting the brakes unnecessarily or gearing down at the right time. 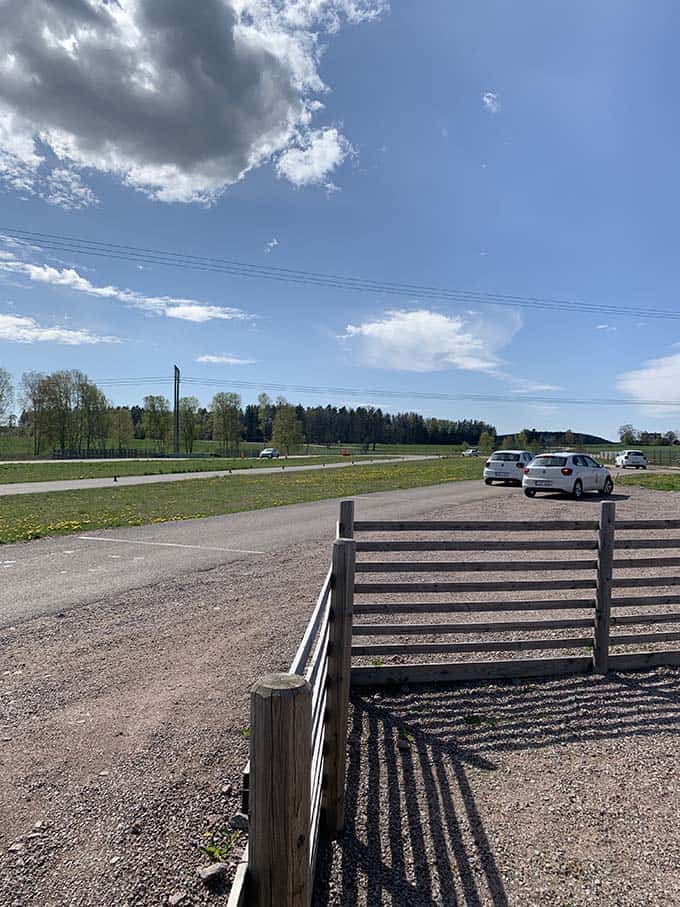 out on the slip course

How's my return to running going? Very badly indeed, thanks for asking.

After finishing up week two of the C25K program, my left hip gave me a very clear eff you and I knew I needed to give it a rest. My last run was Saturday last weekend, and on Monday morning I wisely went for a bike ride around the island we live on rather than attempting another run.

By Tuesday the hip pain had parlayed into a full on back spasm that had me regretting not bringing back more pharmaceuticals from my last trip to Canada.

The kids both got sent home from school with runny noses this week (they have a zero tolerance policy for even a whiff of sickness right now) so on Thursday and Friday I took them out power walking, with Odin in the jogging stroller and Niko on his bike. It worked pretty well as an activity for us, and was good practice for Niko to bike along the path and know he needed to watch for people without me also being on a bike and therefore more able to react and help guide him when needed.

I'm hoping a combination of rest, anti-inflammatories, and some hip exercises will get me back in business by the end of this week. My plan is to go back to the beginning of the C25K program and do each week twice to start, to give my body more time to adjust.

This is the same hip that derailed my return to running last time, so I clearly need to pay attention to it. 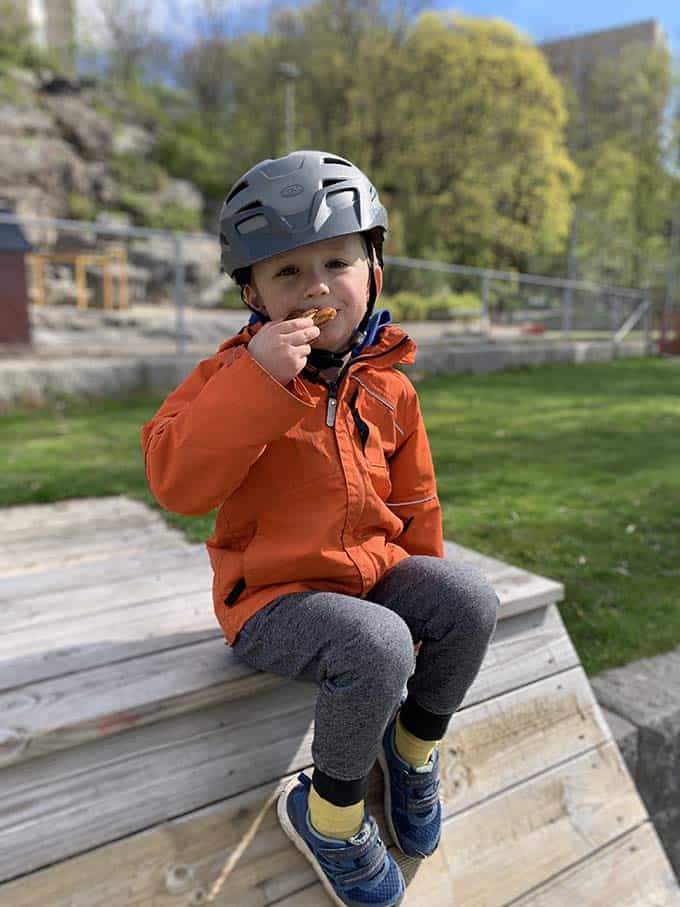 The first HNL air fryer post hit the interwebs this week, and although we started pretty simple, I'm excited for a bunch more air fryer content in the pipeline.

When I first heard of an air fryer I thought it must be some sad, fat-phobic gimmick that I wanted nothing to do with. I mean, there is no way you could possibly replicate restaurant-quality deep-fat fried french fries in an air fryer, right?

100% absolutely right, it turns out. But what you *can* do is whip up a batch of crispy potato wedges way faster and crispier than you would in the oven. Or crispy roasted veggies in under 10 minutes!

I have a recipe coming up for a grilled cheese sandwich made in the air fryer, and if you're wondering why bother, I'll ask you to hold your thoughts until you've sunk your teeth into that crisp, buttery exterior, and then we'll talk.

I finally got an air fryer in January after months of deliberation, because, much like with the Instant Pot, I felt I could hardly maintain credibility as a food blogger without trying one out. I'm surprised at how much I like it, although I will say that if you're expecting it to replicate a deep fryer but with less fat, you'll be disappointed. If you're prepare to marvel at what it can do, especially in the vegetable department, I think you'll be impressed.

Having said that, I solemnly picky swear that every air fryer recipe I post has also been tested in the oven, stove top, or whatever the suitable replacement is. I get that not everyone has the desire, budget, or space for an extra gadget in the kitchen, and I want my recipes to be for EVERYONE. 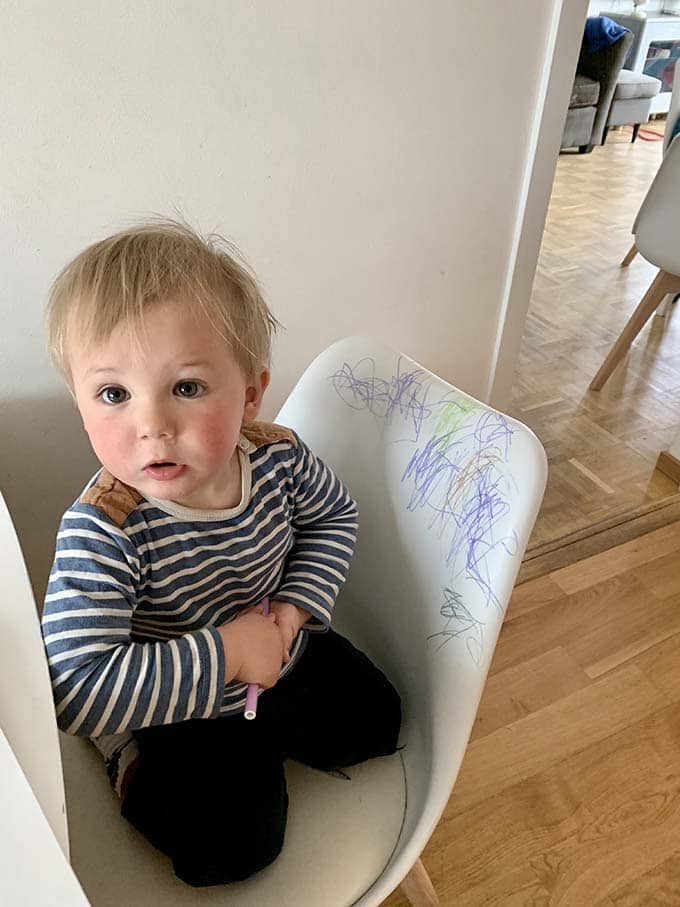 I just needed 5 more minutes on a zoom call

Speaking of recipes, I'm wondering if any of you are interested in being a recipe tester? I've finally nailed the multigrain seeded no-knead bread recipe. I've been working on, but before I publish it I want to make sure the results are consistent when made with North American flour, as the gluten content varies quite a lot.

I'm looking for one Canadian and one American recipe tester, and you need to have access to wholegrain rye flour, spelt flour (could sub whole wheat), bread or all-purpose flour, yeast, and a mix of seeds. If this sounds interesting to you and you can get your hands on the goods, shoot me an email!

First up this week is an oldie but a goodie. Asparagus Fried Rice is a perfect springtime recipe. It's made with wild rice, ribbons of egg, and spring veggies, and it's one of my favourite quick and easy meals at this time of year. 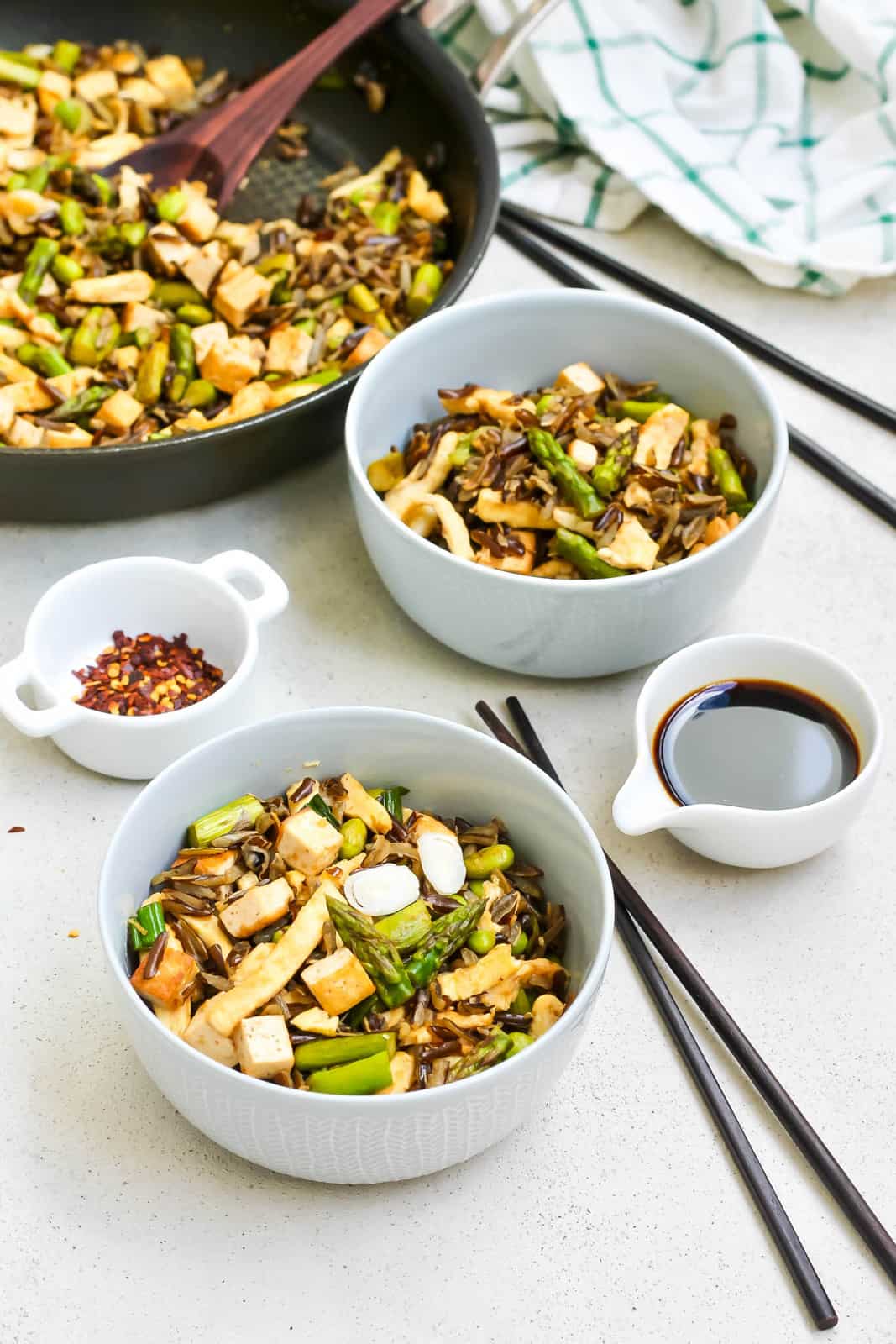 Next up, we're popping our air fryer cherry with these Air Fryer Kale Chips. They're salty, crispy, crunchy, and done in a matter of minutes. Perfect for an afternoon snack. 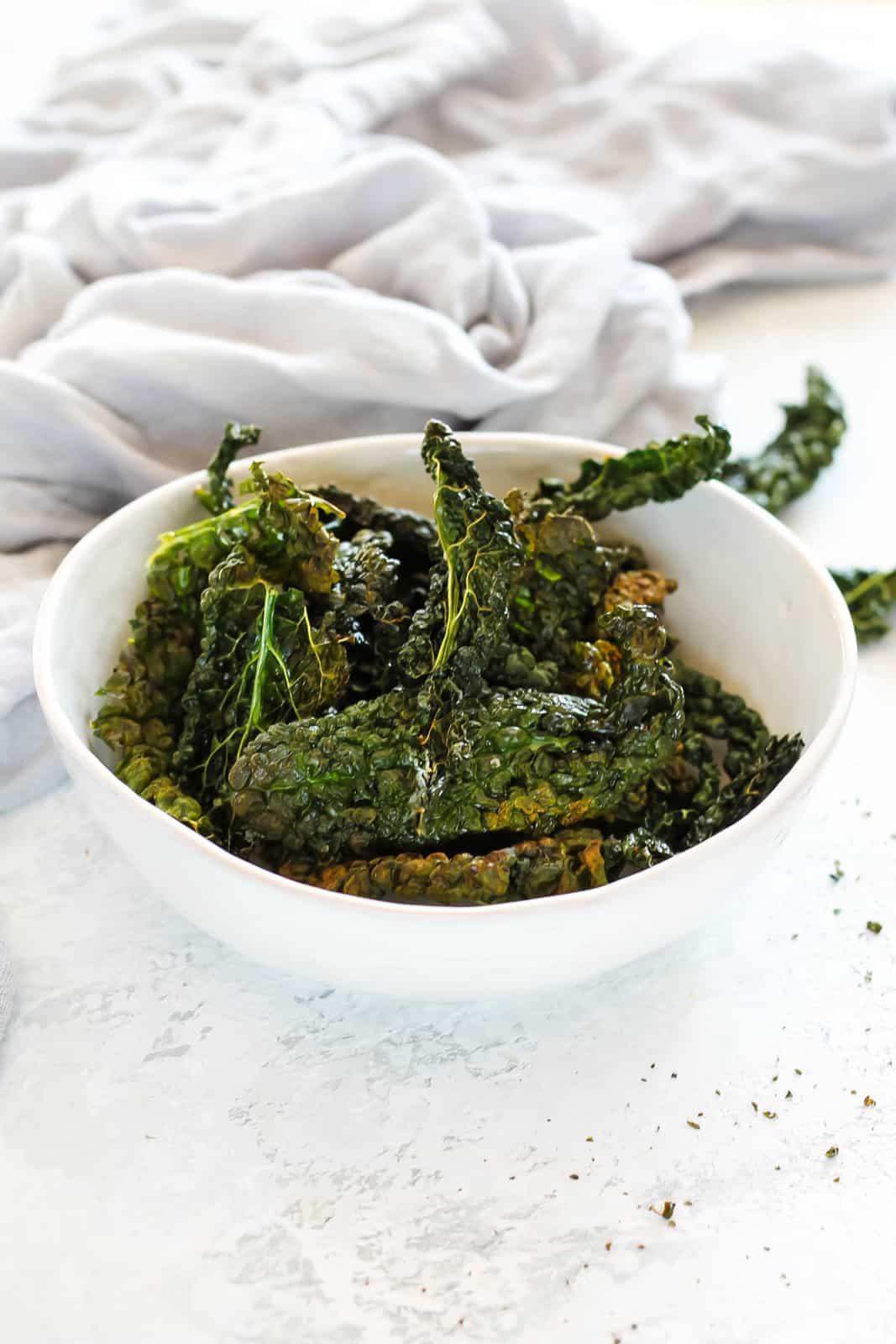 3. Indonesian Black Rice Pudding. Have you tried this one yet?

5. Carrot Apple Smoothie with Ginger. This is more of a blended juice than a smoothie. One of my favourites for sure.

This is a hit with my whole family and such a quick dinner. Thank you. I add some shiitake and then some fried tempeh strips on top at the end too. 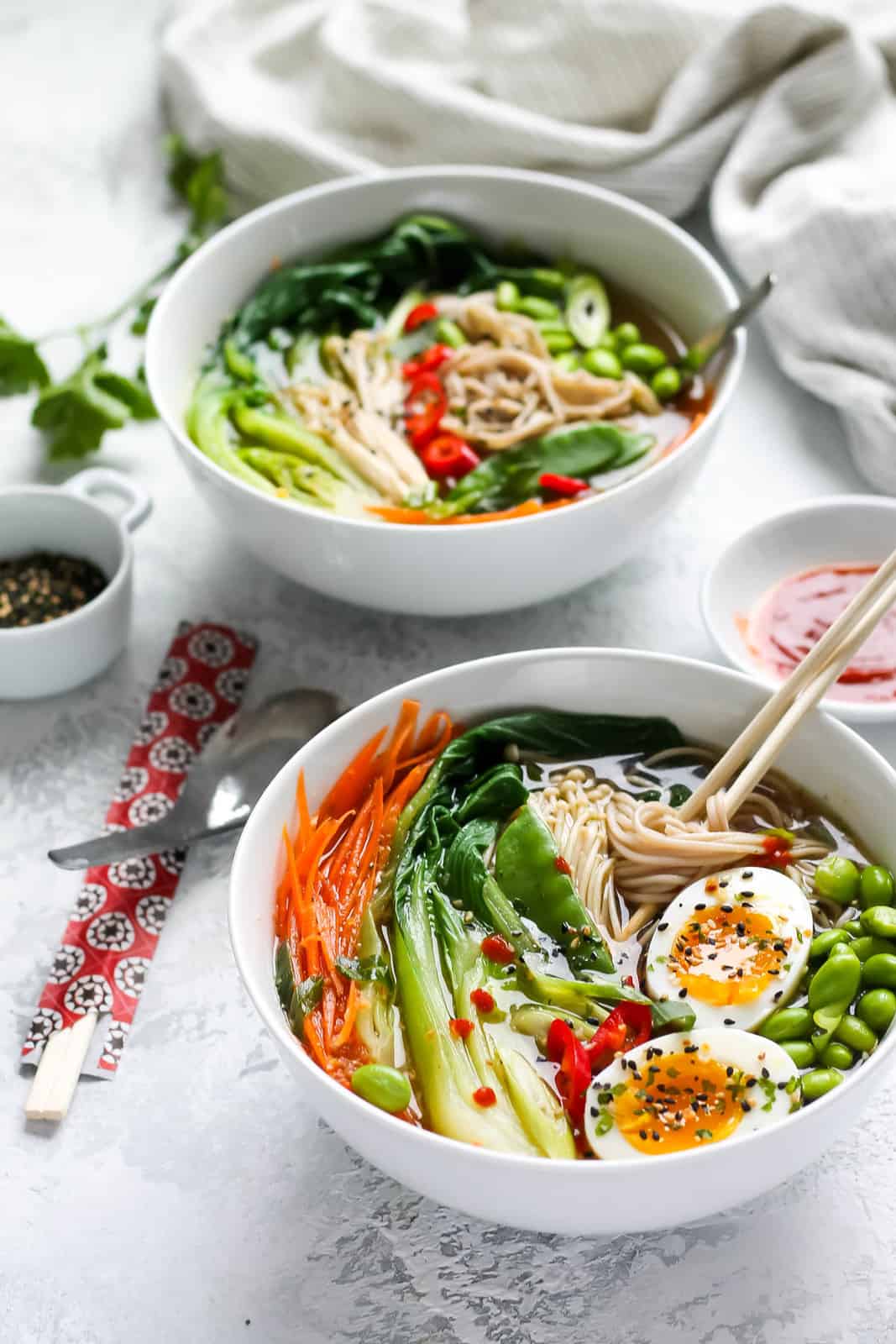 1. How to grow a victory garden of any size.

3. Definitely eyeing up this Fried Halloumi and Black Bean Salad.

4. How to play with seasonings and spices.

5. Pancake cereal is the breakfast trend we didn't know we needed.