Well I have officially survived week two of the C25K running program, and might I say, youch!

This week didn't have a whole lot more running than last week (it was run 90 seconds walk two minutes) but man oh man did it hurt. I expected that my hips would have warmed to the whole experience by now, but no, they are protesting every single step.

I know that this means I need to do those annoying hip-strengthening exercises my physio gave me long ago, and I just don't wanna! I'm really terrible at doing those boring rehab exercises, which is why I suffer from chronic hip and back issues, and why I still have significant abdominal splitting a full 18 months after my last pregnancy. Sigh. I'm my own worst enemy. 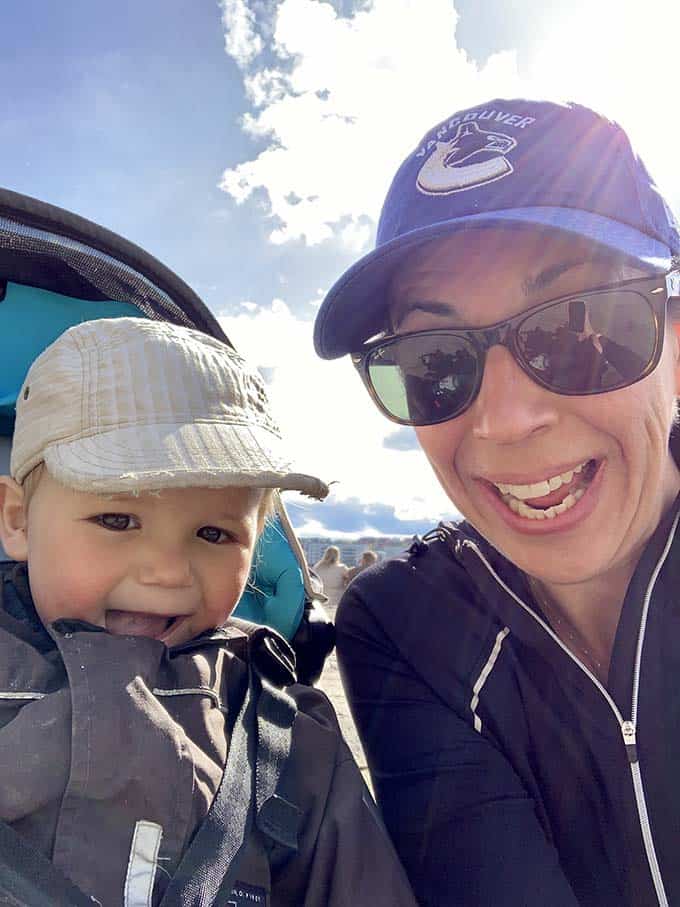 Anyways, week two is in the bag, and I did the last run while pushing Odin in a running stroller. Holy hell, is that a different experience! I was waiting for Paul and Niko to come home so I could squeeze in my run before dinner, and then it occurred to me that we have a top of the line running stroller in the house, so I just went for it.

I don't know if there is a technique to running with a stroller or if it just sucks, but I felt like I was doing a half pushup the entire time and my arms were so tired! It was a little better if I just pushed the stroller with one hand and swung the other arm, switching arms every 30 seconds or so. Odin enjoyed it though, and very helpfully pointed out every duck, dog, and boat along the way.

Even though it hurts, I'm still really enjoying getting back into running. Earlier in the week I casually mentioned that I was planning to go for a run that day, and Niko looked at me and said, "You're going for a run? But... how?" which made me realize that while my kids see their dad doing all kinds of training, they never really see me do this kind of stuff. Although I bring a LOT of other stuff to the table, it's all the more reason to pick this up again.

As I write this, I should be sound asleep in an airport hotel in Utah, ready to hop onto an early flight after a three day conference with my homegirls Sarah and Cassie. We had rented a house near the conference venue, where there would be no children, a bedroom all to myself, and three glorious days of nerding out on content strategy and SEO and things like that.

I should be boarding a flight - child free - and sinking in to eight glorious hours to myself as I crossed the Atlantic again. Then, next week I should be heading back to the airport - this time with my boys in tow - and flying to Mallorca to meet my sister and my mom. We should be celebrating my sister's 40th birthday and drinking copious amounts of cava. The boys should be splashing in the pool with their beloved Mormor, little Odie getting to know her all over again.

I know we all experience waves of this collective grief, and we will keep experiencing them for months? Years? Nobody knows. I just want to scream into the abyss, WHEN? HOW? WHAT??? And get some answers, but I know that there are none.

Anyways, I hope you're all doing ok. 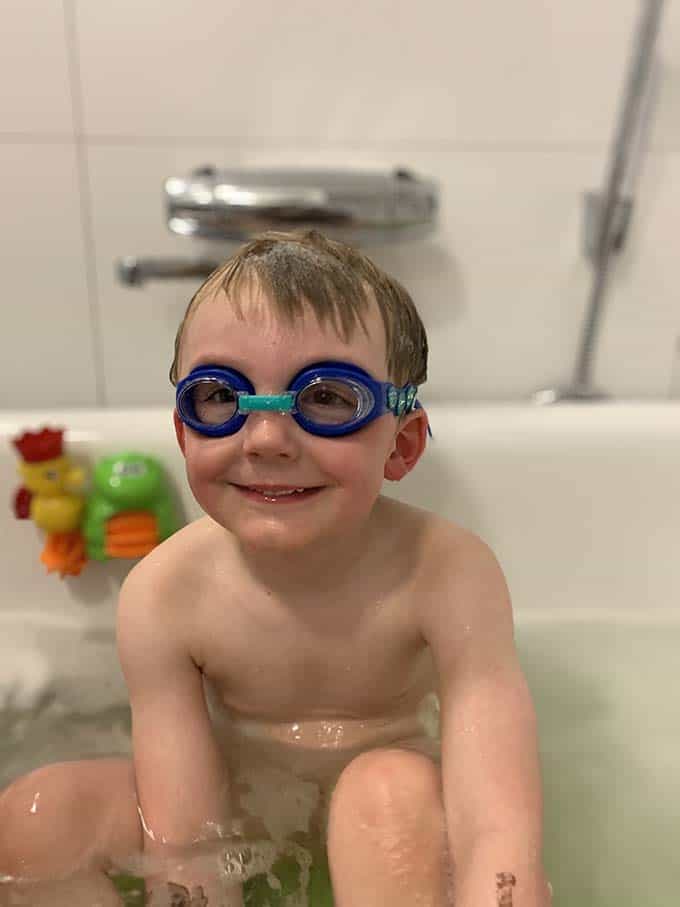 One of the more normal things we've continued to do is our family swims on Sundays. Our swimming pools are still open (along with most other stuff) and there are few things I trust as blindly as the power of chlorine.

Regular readers might remember some stupid drama I got into when trying to cancel Niko's terrible swimming lessons, and I'm pleased to report that once I took matters into my own hands and just started taking him swimming each weekend, he started making great progress. He now swims under water like a little fish, though is refusing to let me teach him how to do back floats (he can do front floats no problem, which is usually the tougher one to learn).

As a former swimming instructor, I'm very against two things: 1) giving goggles to young kids who aren't strong swimmers, and 2) water wings or any kind of wearable floatation device for young kids.

After last week's swim Niko was complaining of sore eyes, so I agreed that we could get him some goggles provided he spends no more than half the swim wearing them, so he maintains the ability to open his eyes under water. Naturally Paul came home from the store with both a pair of goggles for Niko, and a set of water wings for Odin. And you know what? They both freaking love them.

Niko has become even more of a fish, and Odie, who is definitely a natural swimmer, is ripping around the pool in those water wings like an old pro. Parents of young children / non swimmers: if you put your kids in any sort of flotation device, you MUST stay within arms lengths of them AT ALL TIMES.

Do not make me come over there and blow my whistle at you. 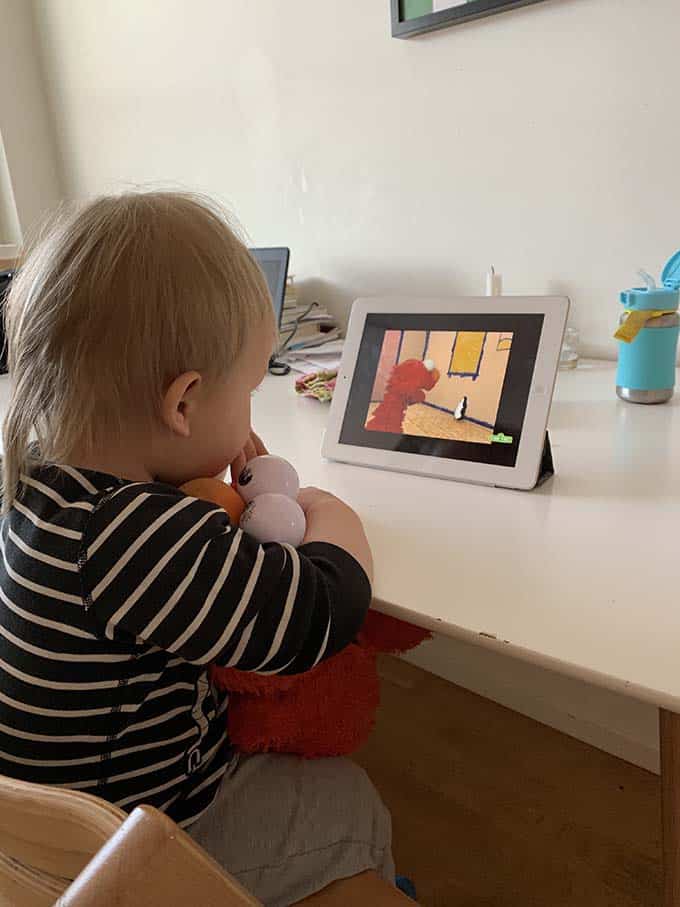 We have this Melissa and Doug sound puzzle that we gave to Niko when he was around two, and the other day Odin just casually did the whole thing with no help, which blew my mind.

In the mornings I usually put on music during breakfast, and when I asked what they wanted to hear he shouted out, "Paw Po!" which after a couple of tries I realized meant the Paw Patrol album on Spotify (don't waste your time with it, there are only four songs). The list of "words" he's saying that I understand the meaning of is growing every day. Currently he says:

Many of these are said in a way that only a mother would understand, but he's getting more and more communicative every day. He says, "this!" when he wants his pacifier, and asks for scissors whenever he's getting his diaper changed. If it's poop, I give him the damn scissors because it's the only thing that will keep him on his back.

After a fleeting romance, Bear is out and Elmo is now in, big time. Niko has a Tickle Me Elmo that he's being mostly pretty cool about sharing, and Odin is smitten. Glad I didn't get around to purchasing multiple bears!

We had a busy week over here on the ol' blog! First up was this game changing recipe for Spelt Pizza Dough. Made with a blend of wholegrain spelt flour and bread flour, this easy yeasted dough will level up your pizza night. And did you guys know you can batch cook your pizza crusts? You do now! Be sure to check it out. 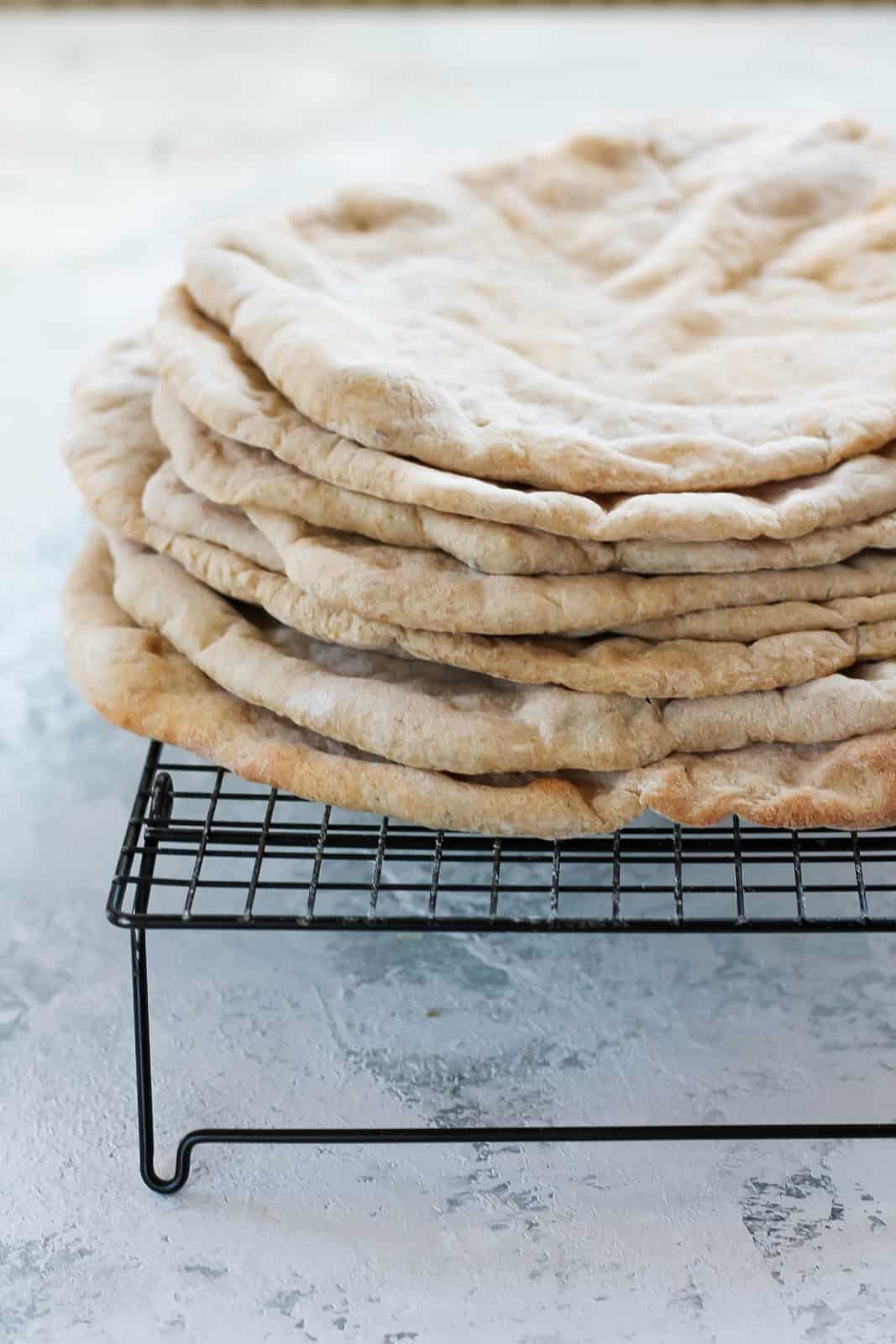 Next up, it was that time of the month so we shared another edition of everyone's favourite post... Just Between Us.

And last but not least, I updated and re-published one of my favourite spring recipes, Smoky Asparagus Quiche. Made with a whole grain spelt flour crust, softened leeks, crisp asparagus, and smoked gouda, this one needs to be made ASAP! 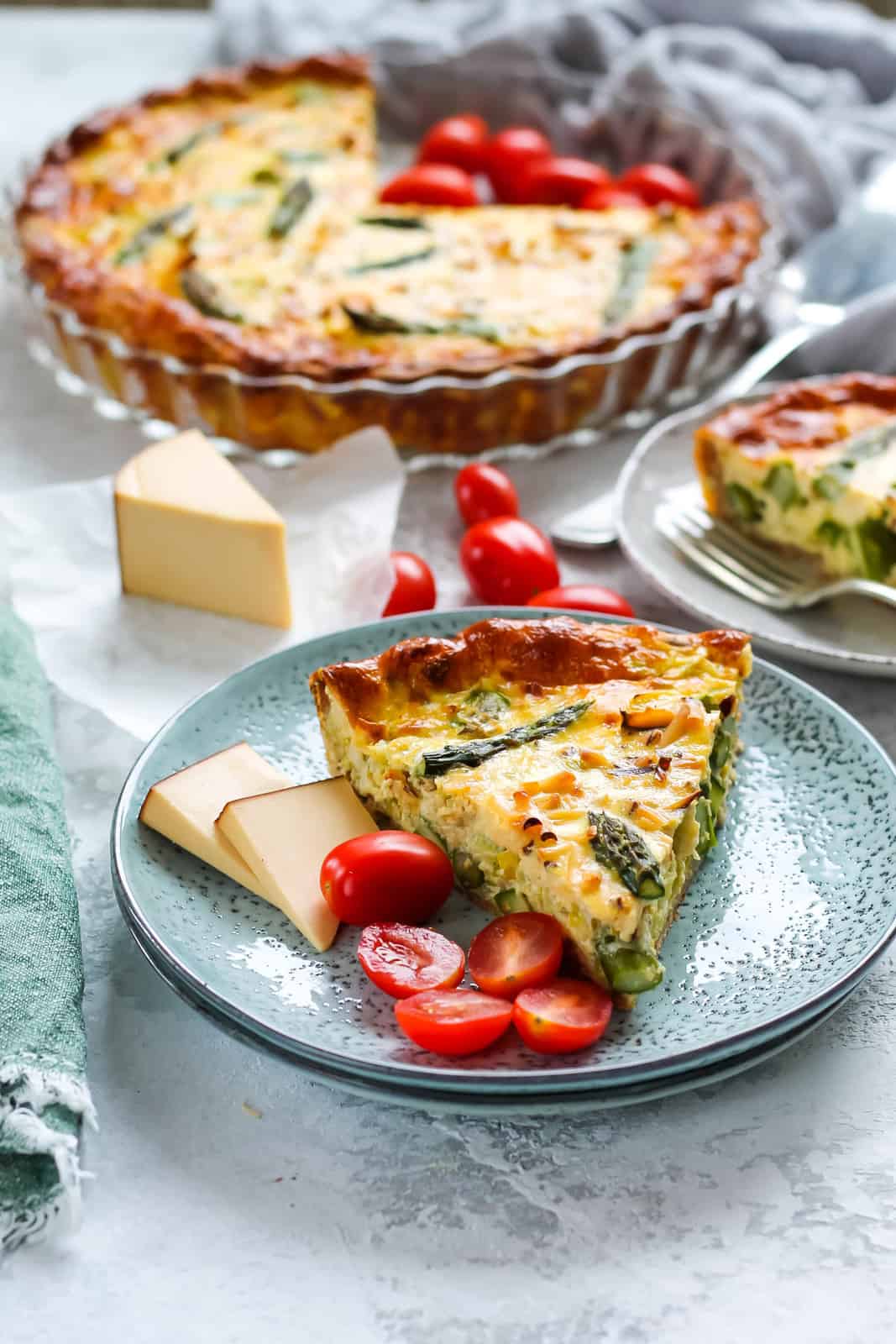 2. Turmeric Latte Mix. This stuff is so good.

3. Red Lentil Dal. One of my favourite recipes of all time.

This is one of those recipes that I saw and literally had to make right away. I had never even heard of a skillet cookie before, so I was immediately intrigued! Easy, quick, and totally delicious. Put half in the freezer in hopes of making it last longer, but then when Katie told me it was also delicious straight out of the freezer…… well, so much for prolonging its life. Will be making this again really, really, soon.

I finally polished off the last of my skillet cookie from the freezer this week, and am equally sad and relieved to have it gone. 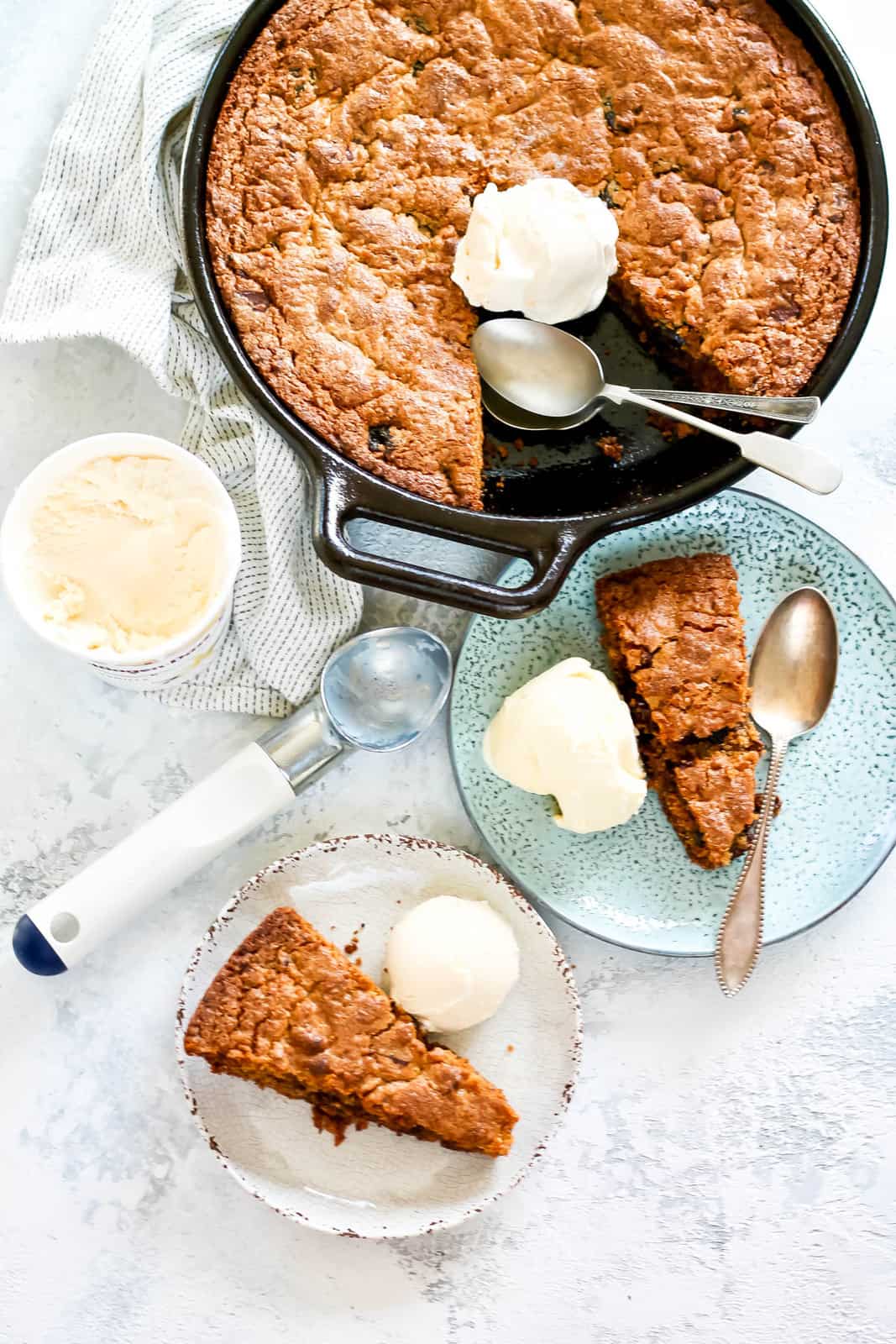 1. Movement vs Exercise: How to be more active without feeling miserable.

2. Why we cook when the world doesn't make sense.

4. In case you need a project: How to tie-dye with vegetable scraps.