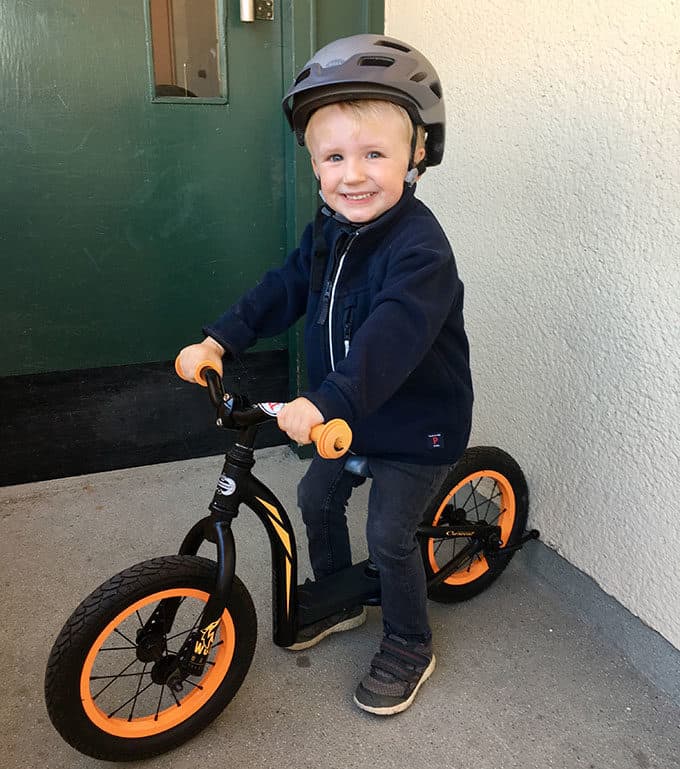 Giving us his fakest smile!

Last weekend my kid picked up the strider bike we bought him back in the spring and just started riding it like a boss out of the blue. Previously he didn’t really get it; he’d just sit on it and ask us to push him, so it was sitting on our balcony collecting dust.

I don’t know what changed, but he gets it now, and I friggen love that bike. He’s been insisting on riding to preschool, which has made the five-minute commute into a three-minute commute and he’s chomping at the bit to get out the door and do some bike riding each morning.

After school when we pick him up he usually wants to go to the playground, which I have zero energy for these days. But now, with this magical strider bike, I can park my heavy, tired ass down on a bench in the middle of the park and he bikes around and around and around, stopping at my bench occasionally for a bite of fruit or to tell me about some manoeuvre he just made. One time he had a (very minor) crash, and biked back to tell me about it and then insisted on creating a dramatic re-enactment. He is so my child.

And lest you think I’m not properly supervising my kid from my comfy park bench, let me assure you that my phone is away and I’ve got eagle eyes on him, which don’t miss a thing thanks to 15+ years of lifeguarding in one of my past lives.

Anyways, I’m hoping that the shine doesn’t wear off of this bike riding thing, at least for the next 36 days which is how long my pregnancy app tells me I have to go ????

I’m also hoping that potty training will follow a similar trend, where he doesn’t get it at all and then one day just walks over to the toilet and takes a crap like he’s been doing it that way his whole life. We decided to take on that battle again after a few “code browns” in the bath tub, and ughhhhhh it is not going well. Send help! 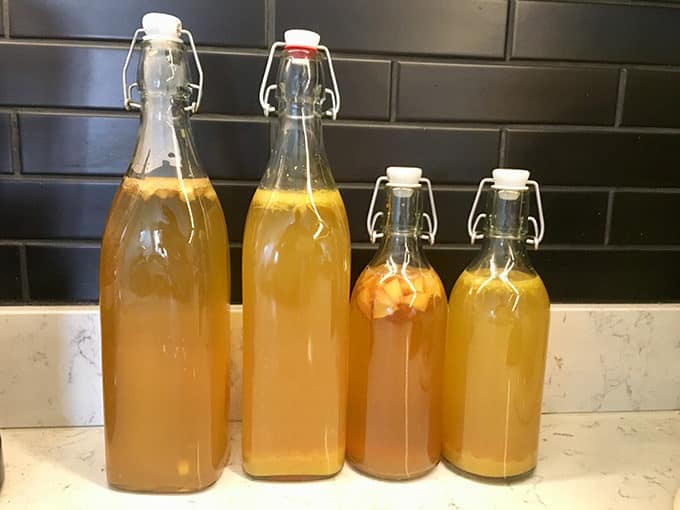 Kombucha update! My first brew is now in bottles for the second fermentation. I let it go for 14 days, and when I tasted it (AFTER I’d bottled it, of course) I thought it was a bit too sweet still. Hoping the secondary fermentation will tone that down a bit.

I also found a better home for Toby the SCOBY, which is in fact a vase I found at Ikea. Probably not a regulation ‘buch brewing vessel, but it’s got lots of room for Tobes and the microbes.

Do you think it’s weird that I gave my SCOBY a boy’s name, given that it’s technically the “mother”? I think it’s perhaps because I live with all boys (and soon to be another boy… it’s a penis party up in here) but Toby just felt natural.

Here he is nestled onto my office shelf between Paul’s big ass trophy and a bunch of my photo props, settled in for a 3 week brew and looking distinctly Arab. I’m hoping the trophy will give this batch of ‘buch winning vibes. 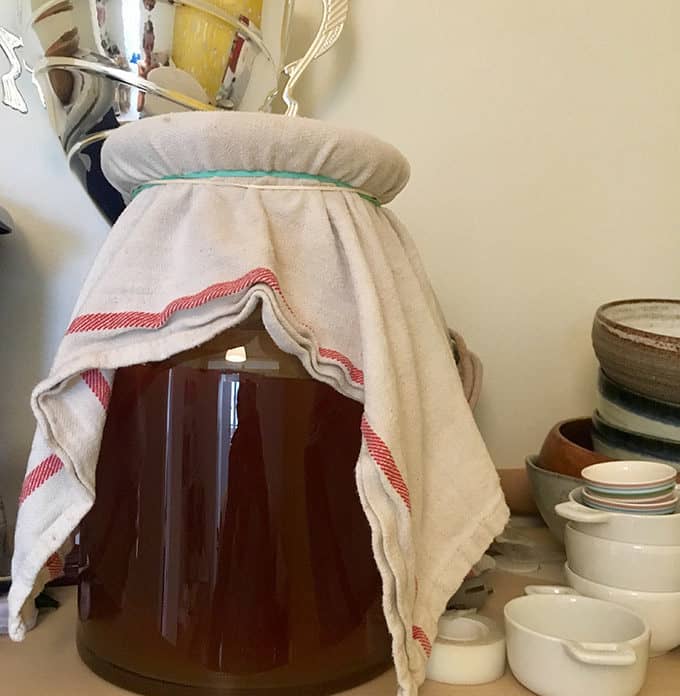 This week we made a super delicious and super quick and easy Warm Zucchini Noodle Salad with Fried Halloumi and Burst Tomatoes. If you haven’t made this one yet, I really encourage you to track down some halloumi and give it a try. I’ve included options for those of you who don’t own a spiralizer, so don’t stress! 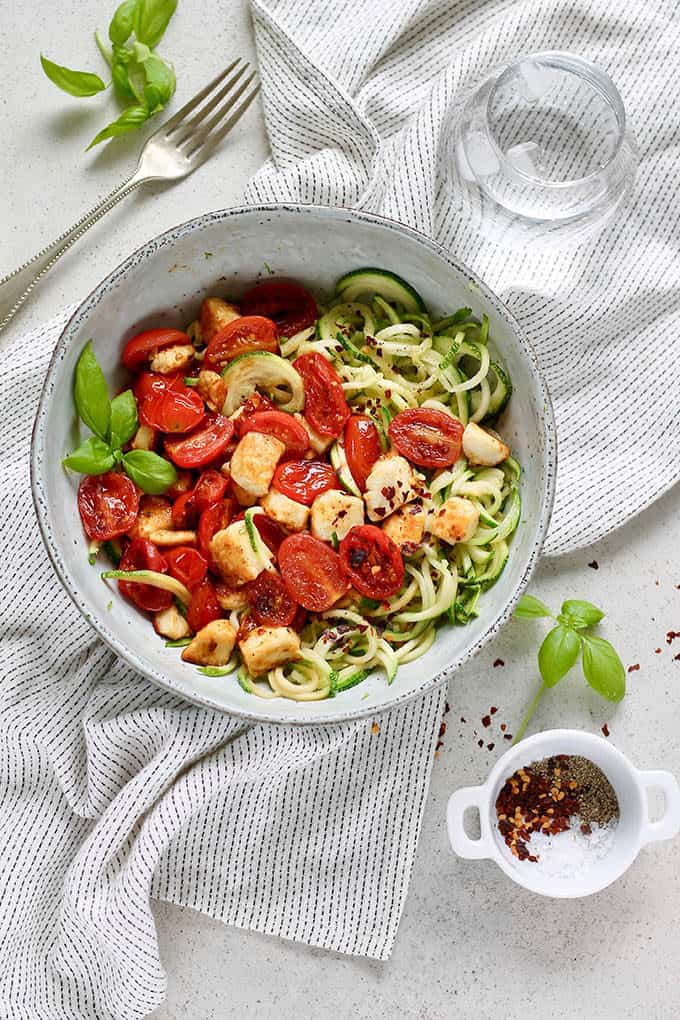 We did a little pregnancy update in which I talk about how hideously disorganized I am this time around and talked about all the fun aches and pains that come with a second pregnancy (it’s technically my third pregnancy but I’m not sure how to articulate that since the first one ended very early, and therefore did not trash my body like the second one did). Warning: contains the word vagina. 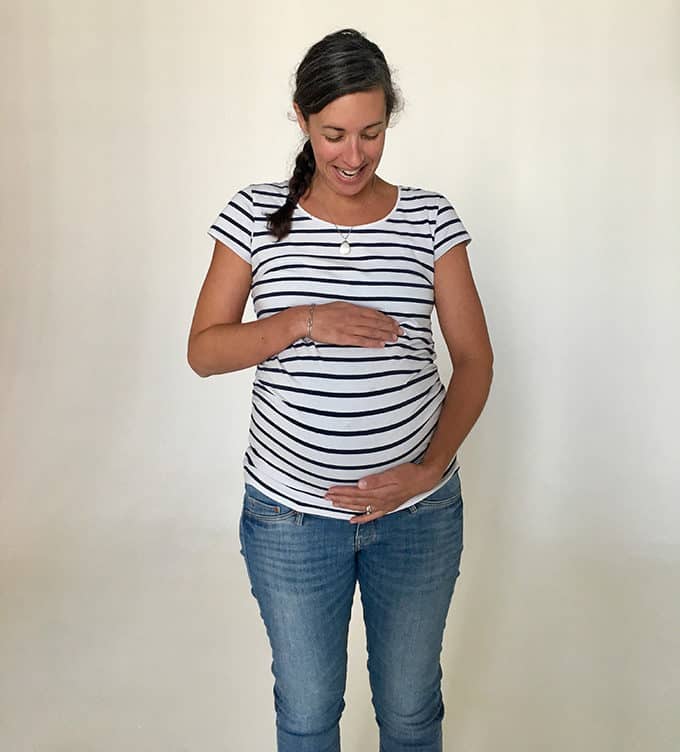 Lastly, I thought that Black Bean and Quinoa Freezer Burritos – one of the most popular recipes on this site – was in dire need of updated photos and instructions, so that post got freshened up and bumped up to the front of the site. 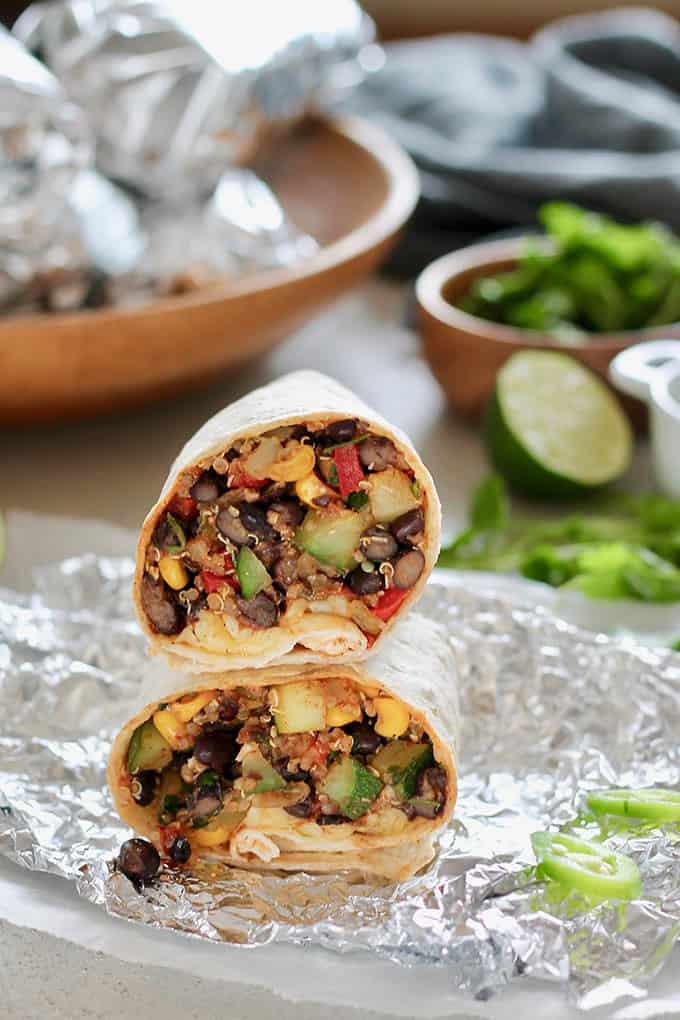 1. Curried Cauliflower Chickpea Wraps. This post needs a facelift too, but I assure you the recipe is bonkers good.

2. Slow Cooker Chickpea Curry. This easy hands-off recipe got a lot of love this week and I’m glad – it totally deserves it!

5. Vegan Corn Chowder. Read the comments on this one, folks. This shit is good.

1. I like this food rule challenge: Noticing when your taste buds get bored.

2. A look at a new breakfast study that suggests maybe you shouldn’t skip it after all. What’s interesting about this one is that those who ate a high-protein breakfast didn’t eat fewer overall calories over the course of the day, but they did engage in less late-night snacking of carby foods.

5. What your cravings are telling you about your health.