Guys. On a scale of 1-10, how worried are you about Coronavirus?

From January until the middle of last week I was a cool 1-2, but sometime around Wednesday or Thursday last week I started to have trouble deciding how worried I should be. I’d say that on any given day I’m fluctuating between a 2 and a 7, with 1 being not worried at all and 10 being full-blown panic.

Probably, part of the issue is that I’m in all of these Facebook groups for International moms, and holy crap are those people ever losing their minds. Lots of people worried about whether or not to send their kids to school (I wasn’t worried about that, should I be worried?) and freaking out about how the Swedish government, which has taken a pretty chill approach to the whole thing so far, isn’t doing enough, etc, etc.

Then I started reading about the toilet paper shortages and people going crazy stocking up on supplies and it made me wonder whether I should be bulk buying diapers and dried beans and powdered milk and stuff like that.

Honestly? I think it’s just made me feel very far away from my family. Which I am.

I worry that if shit gets real, I won’t be able to get to them. That if my parents get the virus I might not see them again. I worry about what would happen to my children should Paul and I get it. Who would look after them if we got really sick? What would happen to them if we died? Clearly we should have a plan in place for this kind of thing, which we currently do not.

I do think that mostly we all just need to chill out and wash our hands, but I also wish that someone would give me some clear information about exactly how worried I should be. My company and Paul’s company have both implemented travel bans, and we commute to work and school by bike, rather than public transit, so in one regard I feel like our risk is low.

The one bit of silver lining from this whole corona hysteria is the travel ban bit, since we still don’t have a babysitter in place to help with daycare pick-up. Paul is livid that his trips have been cancelled, but as the one who was facing double duty at double daycares when he went on two week-long work trips, I’m kind of relieved.

We are, however, interviewing another potential candidate this week, and I’m really really hoping that the third time’s the charm. We’ve had one major no, two who we thought were going to work out but didn’t, and another who was just kinda flakey, and every single one of them when I asked for references couldn’t provide them because they’d changed phones or changed email accounts or something like that.

You know what? I was an au pair in New Zealand for a year when I was 20. That was TWENTY years ago, and I can still get in touch with those people. That was before I owned a cell phone, before Facebook existed, and I’ve certainly switched email accounts a time or two in that time. But if you want a reference? I can get you one. Boom. Just like that.

Let’s just hope the next one is the golden ticket.

Speaking of daycares and all that, some good news: we got a spot for Odin at Niko’s school. Yay!

The bad news? It doesn’t start until August, so we’ve got 3.5 more months of this double daycare situation. I keep trying to remind myself that we lived without a bathroom for six months last year, so we can get through 3.5 months of two drop-offs and two pick-ups. People survive worse.

One thing I have really sucked at since we’ve both been back at work is making time for exercise. I ride my bike to work so I get at the very least about 40 minutes of bike riding in each day (total, it’s 20-ish minutes each way) but that is pretty much it.

I miss swimming, but since I have to leave the office so early on my pick-up days, I don’t feel like it’s fair to turn up late if I squeeze in a swim before work. And leaving the office for a long lunch to get in a workout doesn’t feel doable. Once we have a babysitter in the mix I’ll see about doing lunch swims a couple of times per week, but I felt like I needed to find something to supplement the bike riding that also fits into my schedule. 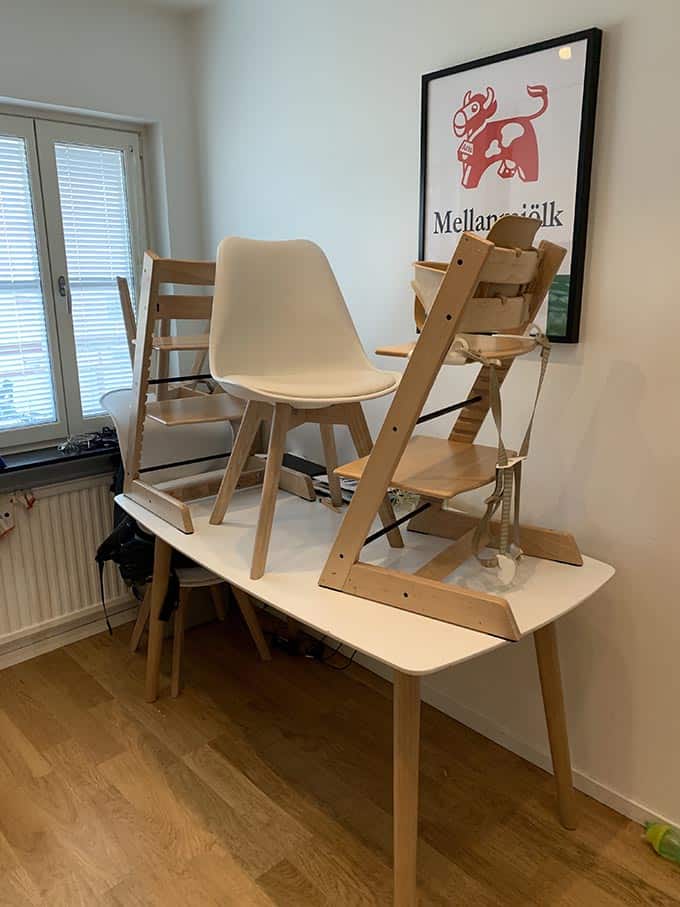 How we have to keep our chairs now

I decided to try and pick up a home yoga practice again, since I feel like I don’t have time to go to classes at a studio. Previously, I had a membership to a site where you could stream classes, but I found that with 1000’s of classes at my fingertips I’d spend an hour searching through them trying to decide which one to do, and then I’d run out of time to actually do the class.

Now I’m trying a new approach. I followed Yoga with Adriene on YouTube and am doing her 30-day yoga journey, but spread out over more like 90 days. I’m doing the classes on the mornings that Paul takes the boys to school. Since he usually gets them out of the house earlier than I do, I find that I have time to hit the mat and still be at my office by 9-ish. And since it’s a 30-day series, it eliminates needing to think about what class to do next, as I just do the next one in the series.

As a busy mom with two terribly energetic little dudes, a full-time job, AND this little ol’ food blog, I tend to put my own needs last. So it feels good. My muscles are sore (in a good way) and it feels good to be taking the time to do something for myself.

This week was all about gems from the archives that deserve some love! First up, Roasted Cauliflower Hummus Bowls. Let me tell you, if you’ve never dug into a big bowl of hummus topped with warm roasted cauliflower and called that a meal done did, you’ve never lived. 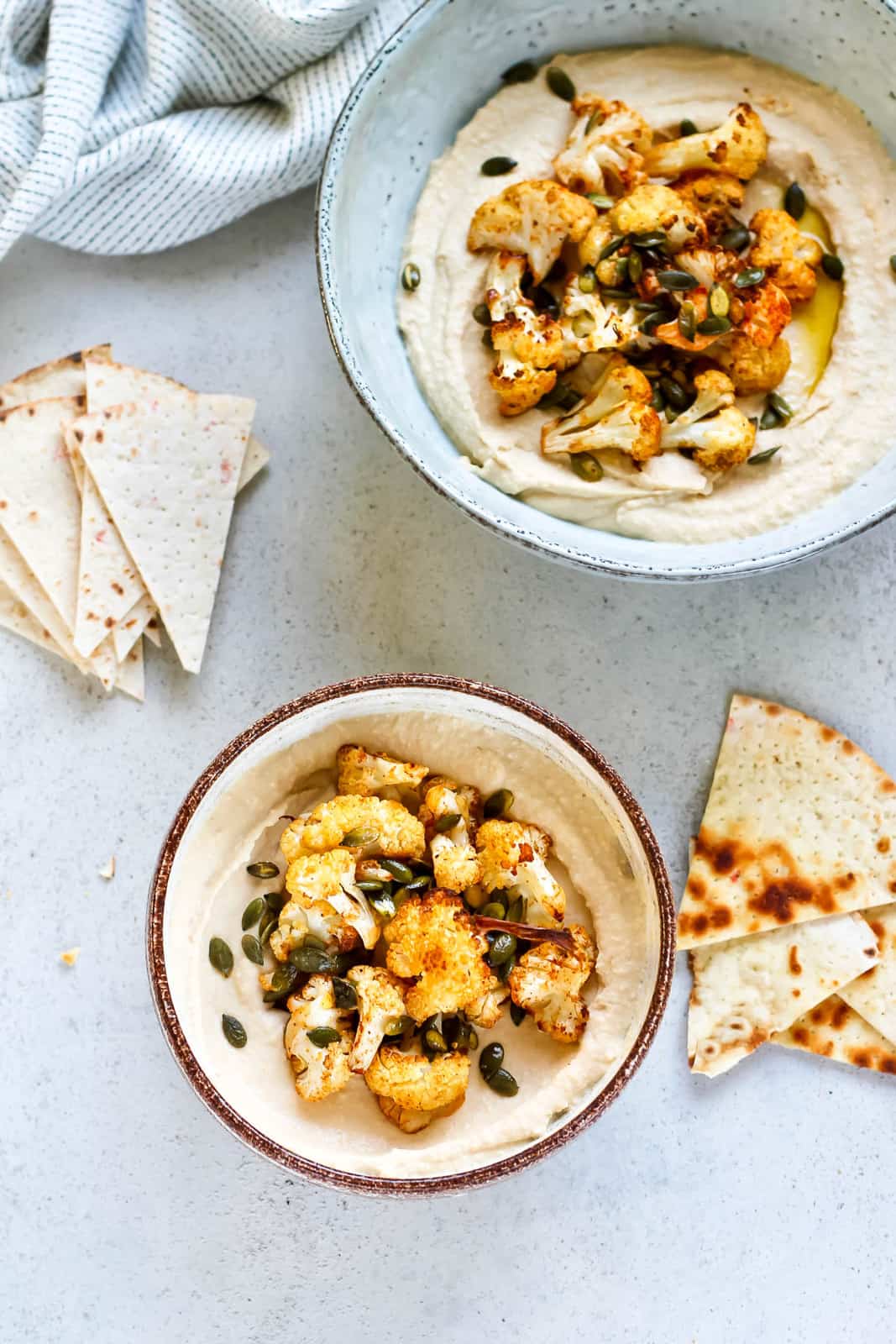 Next is this simple and delicious Orecchiette with Broccoli and Lemon. Is there a pasta shape cuter than orecchiette? I think not. 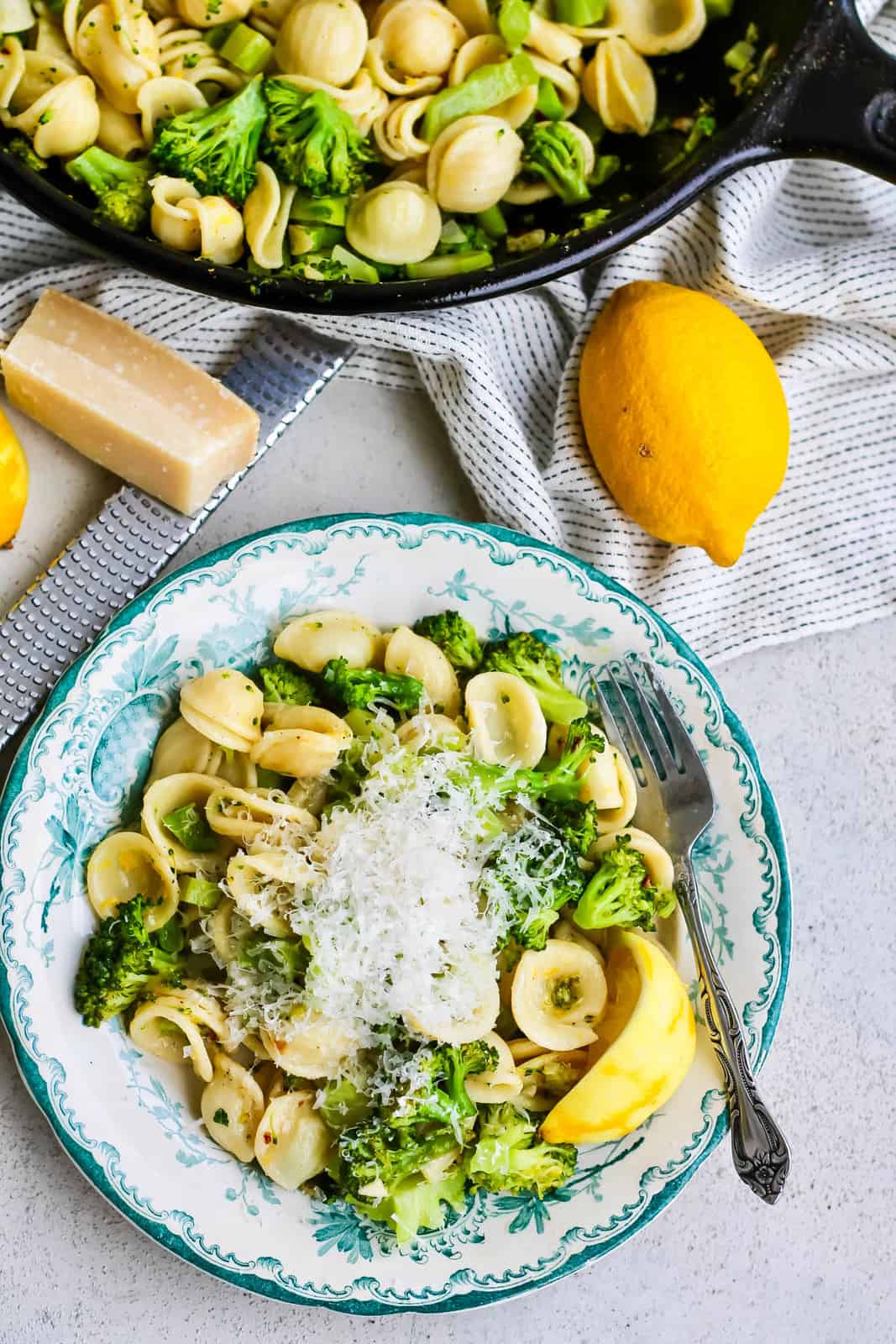 1. Slow Cooker Chickpea Curry. I’m packing some chickpea curry from the freezer for lunches this week and I am not mad about it.

2. Red Lentil Dal. I really must make another batch of this beautiful dal soon.

These are delicious ???? I used whole wheat flour instead of spelt. I used my ninja to chop up the carrots. Man! These muffins taste awesome.
So good.

Mmmmmhmm. Those are some good muffins! 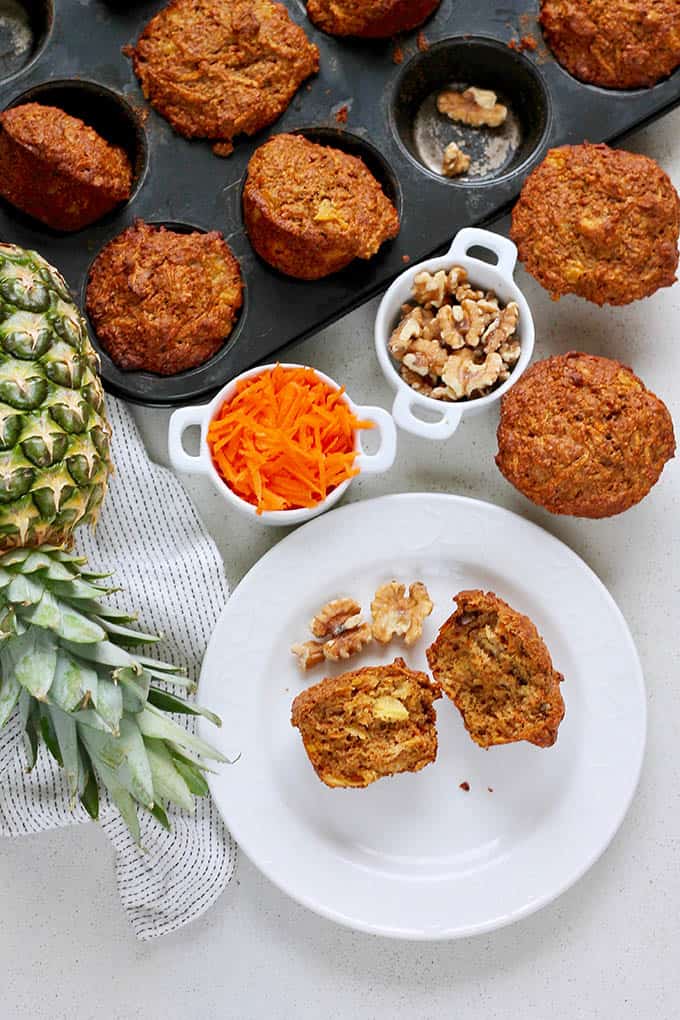 1. Pistachios are now considered a “complete” source of protein. Here’s what that means and why it matters for a plant-based diet.

2. How to fact-check “wellness” products & claims and treat your body with compassion.

3. How to stock your pantry with nutrient-rich foods in case you need to self-quarantine for a few weeks.

5. Dealing with back and neck aches after a long week at the office? This yoga pose can help unwind those muscles.