Hey folks! A belated happy Valentine's Day for those of you who are into that sort of thing.

Paul and I are mutually non-romantic people and really couldn't care less about doing anything for Valentine's Day. We went out to a restaurant on February 14th one time, 16 years ago, and it's a mistake we've never made again. What a gong show.

Niko was kind of excited about the idea of it, though, so despite being tired and cranky I decided to put a small amount effort into it for his sake. And by effort I mean grabbing some fancy cheeses and a couple of heart-shaped boxes of chocolates from the grocery store on my way home.

I made a nice-ish cheeseboard (not as nice as this Vegetarian Cheese Board but still pretty nice) and opened a bottle of bubbles, and there was a bunch of tulips stuffed into a Tupperware container waiting for me when I got home. We put the kids to bed and ordered Indian food and watched Ferris Bueller's Day Off on Netflix.

That's pretty much it, and I wouldn't have wanted anything more or anything less.

Parents of littles, I need your tips for streamlining your morning routine. How do you get yourselves and your monster(s) out the door on time and be a sane person as you go?

I have a tendency to stay up late working, but I get tired and increasingly unproductive. I was thinking fondly about the days before my second child was born when I used to get up early and quietly work on my computer for an hour or so before Niko got up, so decided to give it a go again. I've been doing this thing where I set a bedtime alarm as well as a morning alarm, and have been trying to put it 10 minutes earlier every day.

Simultaneously, my darling second born has been running an experiment where he, too, wakes up earlier and earlier each and every day, and no matter how early my alarm is set, his wake-up is set for 15-120 minutes beforehand. On Thursday Paul was away at an overnight work thing (lucky bastard got to sleep in a hotel room all by himself) and Odin treated me to a 4:30am wake up and we STILL left the house 45 minutes late somehow.

I'm trying (and failing) to figure out where I'm going wrong and what I could do better. I can't get up early enough to shower before the kids get up (see above) so I've reverted to an evening shower while the kids are in the bath (this totally feels like gaming the system, as previously I was showering at 11pm and going to bed with wet hair).

I bulk prep breakfasts on the weekends, so it's just grab and heat up or grab and go, yet every single day I am late. Why? How? What can I change?

We got our new Thule bike chariot set up last Sunday evening, and you guys, I freaking hate this thing. I HATE IT!!!

Let me say that the product itself is perfectly fine. Thule makes a good wagon (we also have this Thule high performance running stroller amongst our fleet of strollers), and I think that if we lived in a house and didn't have to lug the damn thing up and down from our apartment, I wouldn't hate it so much. But we don't, and so we do, and the stupid thing is too wide to fit through our door so we have to turn it on it's side and drag it through and I just want to punch it in the face every time I have to do it.

Instead, I hastily ordered online the cheapest model that said it held two children and just blindly trusted that it would work out. And lo, it turns out that Niko is too big for it, so every morning there's this tantrum session that erupts when I jam two children in snow suits and bike helmets into the bloody chariot to go and do drop off at not one, but two different daycares.

We are still #2 on the waiting list for a spot at Niko's school, and I swear to god if we don't get one in a month or so I'm going to go all Tonya Harding on this situation and break some little legs to make some spaces appear.

We kicked things off this week with one of my favourite things to make for a quick and easy snack or appetizer, Spicy Garlic Edamame. It takes just a few ingredients and about 10 minutes to make and it sooooo good. 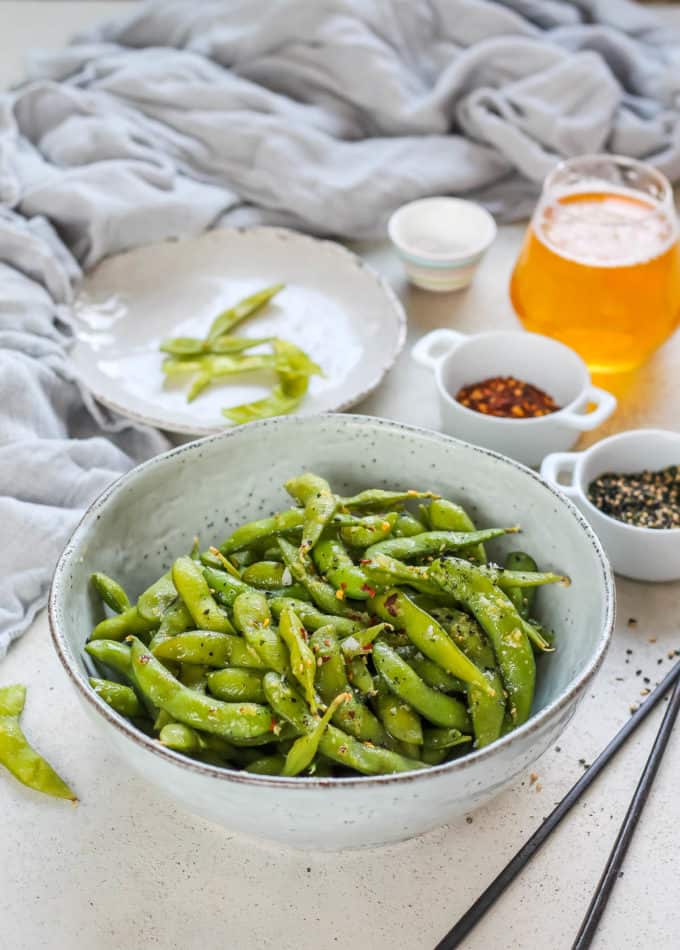 Next up, in the name of heart health in honour of all the romance going on, I published A Guide to Omega-3's for Vegetarians. 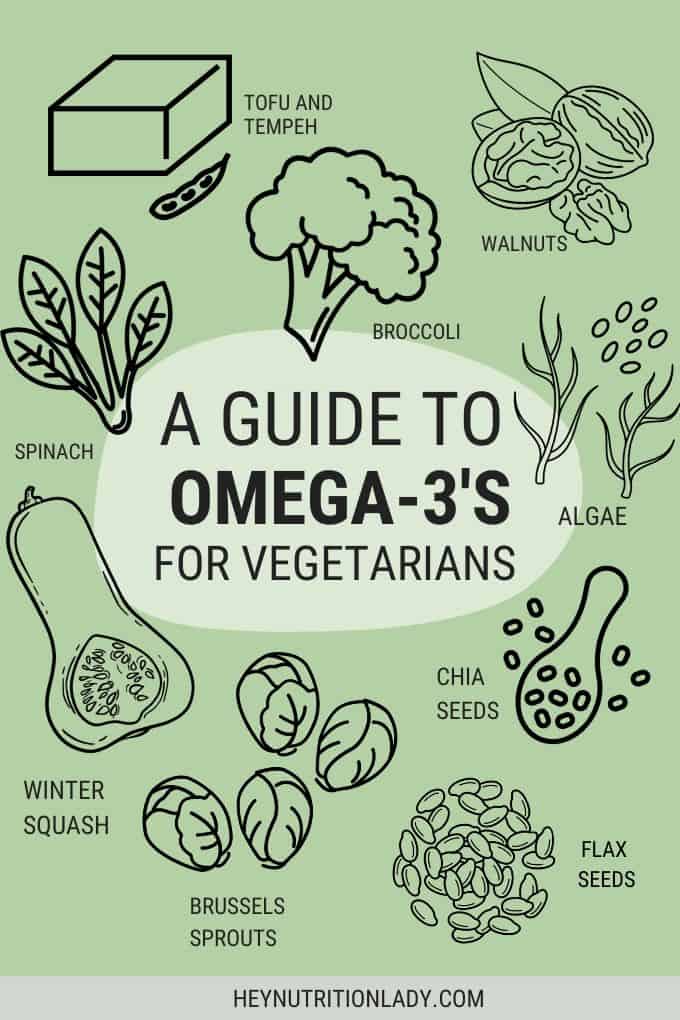 4. Chocolate Black Bean Smoothie. Beans in smoothies. It's a thing.

5. Indonesian Black Rice Pudding. If you haven't tried this one yet, what are you waiting for?!

Jennifer left the following comment and 5-star review on my Chipotle Hummus recipe:

Wow, this is the best hummus I have ever made, and it makes a TON! Tastes similar to my favorite store-bought hummus but definitely healthier. I plan to use it with veggies and whole wheat crackers as a snack, but just used it as a spread for my black bean burger. OMG, so good! 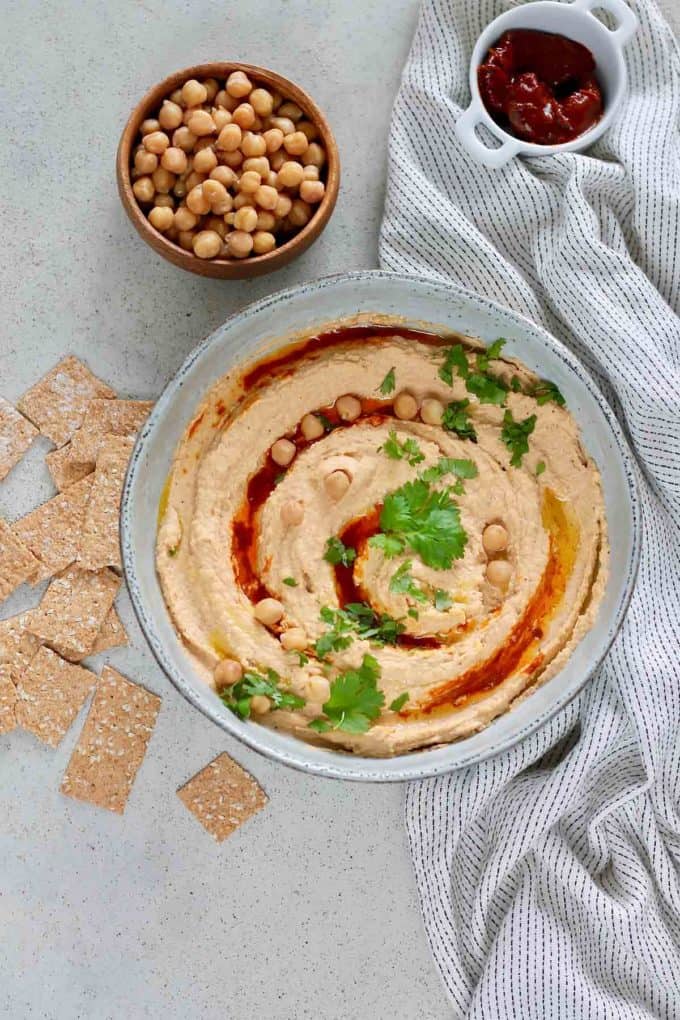 1. How much fat should we have in our diet? What we do and don't know.

2. How does a fruit that basically hurts you to eat it not go extinct? The fascinating history of the chili pepper.

3. On fixing our food system.

4. This is interesting: A new feature on food labels will help consumers understand the environmental impact of their food shopping.

5. Forgot the evaporated milk for your recipe? Here are five substitutes and how to add them.