After our strep-mas holidays I was 100% ready and willing to wave goodbye and head back into the office. No sick kids! Actual grownup conversations! No antibiotics!

I spent a good part of this week worked up in a rage to do with Niko’s stupid swimming lessons. For context, I was a swimming instructor for over 15 years and was always going to have really high expectations. But the preschool aged swimming lessons here suuuuuuuck so much and they’re insanely expensive to boot. 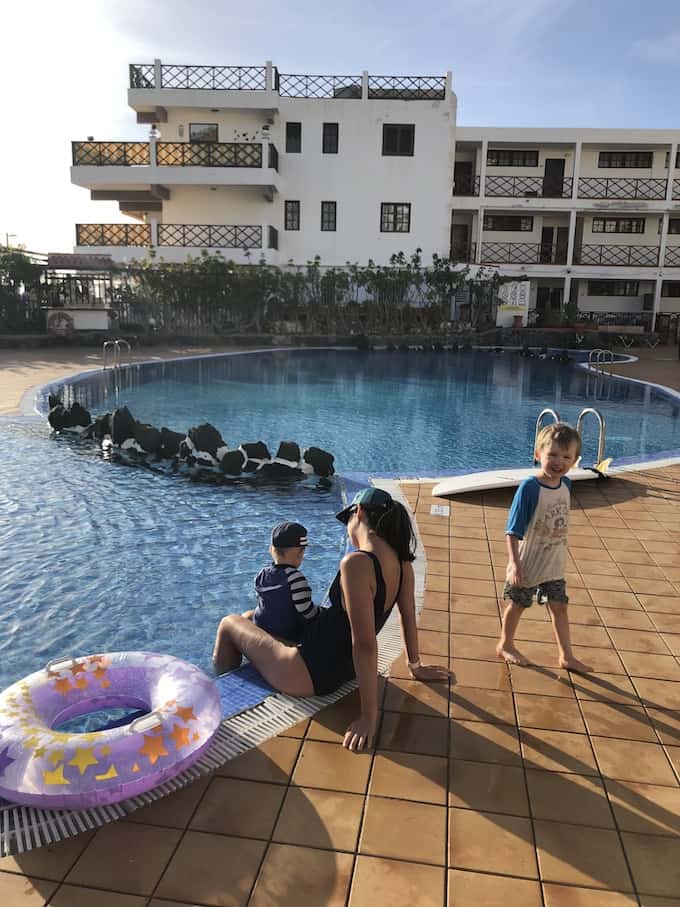 I love swimming, but…

I begrudgingly signed up for a set of lessons so that Niko could go together with his best gal pal, and although they were stupid and he learned nothing, they had a good time, so I signed up for the continuation set to start mid January. But then Niko started skating and took to it so much more naturally than swimming. Paul and I discussed and agreed we’d take a break from the swimming lessons and focus on skating until the spring or so, and then we could pick them up again.

And honestly? I’m exhausted, so the thought of having to spend a chunk of my weekend going to the pool, taking part in these parent participation lesson, and then schlepping back on the bus was incredibly unappealing.

But, strep-mas happened, and between being incredibly sick myself and then dealing with Odin’s multi-stage sickness, I missed the cancellation deadline BY ONE DAY. And here’s the thing: the day I would have had to cancel by was January 1st, which was a holiday, a day on which their office was closed anyways. Nothing would have happened.

I spent some time trying to figure things out on their difficult to navigate website before I realized the only way to cancel was by email, so sent a message explaining the situation and thought that was that. A full SIX DAYS LATER I finally got a response saying sorry, I’d missed the cancellation deadline so they were unable to process it as the registration was binding.

Listen. I 100% acknowledge that I missed the deadline by one day. I dropped the ball. But I’ve been on the other side. I have been them. I know how simple it would be for them to just click the cancel button in their computer registration system. You make exceptions. You act with grace. You listen to circumstances and have some compassion.

Things started out friendly enough, with me explaining the situation, but they just kept saying, sorry, I’d chosen to accept the registration policy and there was nothing they could do. I switched to English, explained that my Swedish isn’t *that* great, and I actually hadn’t fully understood the cancellation policy, plus, had been very very sick and dealing with sick kids and could they just please be nice and help me out.

Then it started to unravel and got to the point where I was f@cking furious, and no matter how “helpful” they claim they are trying to be, I don’t ever want to set foot back in that facility again. I’ve basically decided to just flush the money down the toilet at this point because I’m too pissed off to go back, and if I do go there and have to listen to the same three songs (the ONLY three songs they sing in EVERY lesson at EVERY level) my head might actually explode. 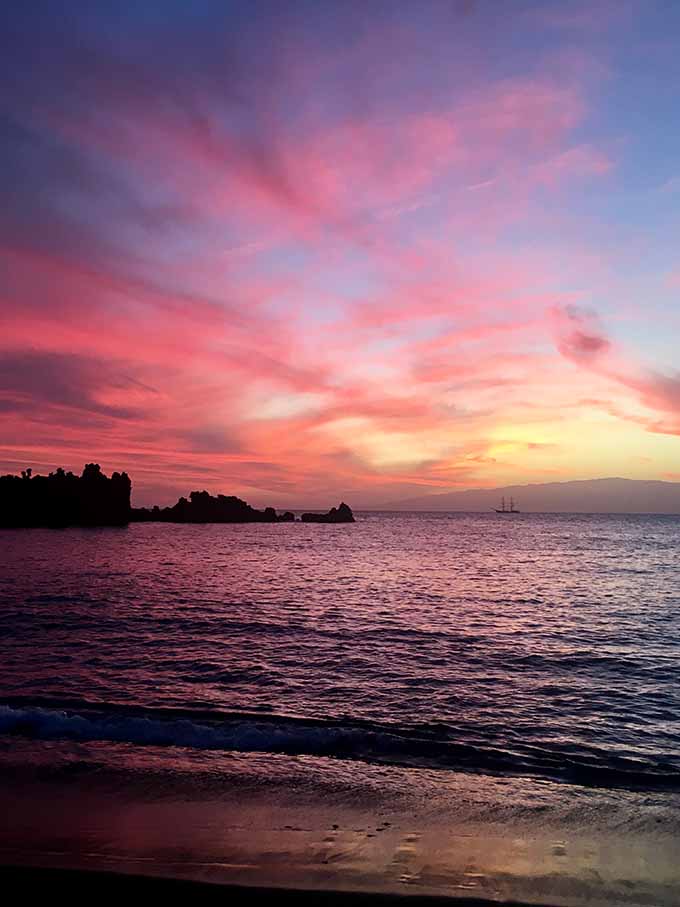 I can remember one time, probably 12 or more years ago, I was at the front desk of the facility I used to work at and a woman turned up with her son during an adult only swim time. She explained to me that his grandfather had just passed away and although she knew it wasn’t a time that children were normally allowed to swim, he had loved swimming with his grandpa and could they please go in.

I said no. I said no because it was an adult only time and those were the rules. And you know what? I still think about that kid all the time and kick myself or not just letting him in. It would have been so simple to show a bit of kindness.

I could have chatted with him about the rules, told him there weren’t any toys or diving boards or anything, and then just let a sad little boy go for a swim. But I didn’t, and all these years later I still feel like a dick about it.

I honestly hope that this woman is still thinking about this situation 10 years from now. I’ve been literally pleading with her but she will not budge, all for a bit of red tape over some stupid (STUPID) swimming lessons. Now she’s lost a customer for life, and you better believe I’ve been ranting in the expat groups on Facebook.

It’s just one of those things, and I’ve wasted money on worse, but man, I’ve been PISSED this week! 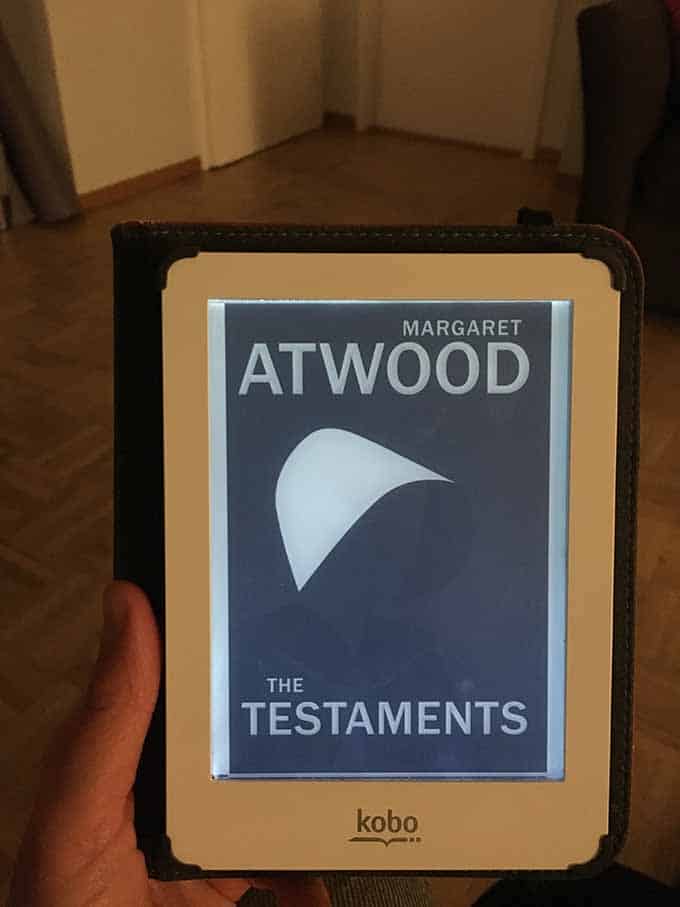 Odin is starting daycare in two weeks and I am stoked about it! It’ll be nice for both Paul and I to be working again. Financially, of course, but also because we’ll both be sane people who get to do adult stuff with our brains during the day, and then enjoy the time we do spend with our kids a lot more.

Unfortunately, we didn’t get a spot at the sane school where Niko goes, or even one of the give that we signed up for, so we’re going to be juggling drop off and pick up from two different schools, at least for a while.

Odin is currently #2 in line for a spot at Niko’s school and when I reached out to them to see what the odds were we’d actually get in, they were a whole lot more understanding than the swimming lesson people and said that they were having a meeting about adding another teacher and they’d get back to me. Fingers are crossed very tightly.

In the mean time, we’re looking at transport options that will allow us to get between the two schools as quickly as possible (they’re about a 15 min walk apart) that we’d both be able to use. It seems like the best thing is to get a bike chariot that will seat two kids and buy an extra bike hitch so that if I take the kids to school I can leave it there and Paul can pick them up and hitch it to his bike.

We’re looking at this Thule Bike Chariot that has front wheels that flip down so if someone were to pick up without a bike (say if we had a babysitter pick up) that would be ok too.

Anyone else in this situation who has some tips for making it work?

Do you love it or do you hate it? I’m willing to bet that it’s a pain point for so many of you guys, so I’m super excited to let you know about a new vegetarian meal planning subscription service called Green Plate Club.

Green Plate Club was started by my friend Kiersten, who I’ve worked with on a number of sites over the years. She was the founder of a hugely popular vegetarian food blog called Oh My Veggies, which I used to work for as a nutrition expert. When she had her first baby she sold OMV to some people who unfortunately ruined the site.

After that Kiersten worked as an editorial director for another big site, and helped to launch another vegetarian food blog. Her second daughter was born VERY early last year, at just 25 weeks, and after spending four months in the NICU she lost her job right as she brought her special needs baby home from the hospital.

Around that time Kiersten pitched the idea for Green Plate Club to me and asked if I’d like to get involved, so this is an idea I’ve been invested in from the ground up. Kiersten has over 10 years experience as a recipe developer, and used to put together hugely popular vegetarian meal plans for the sites she ran. 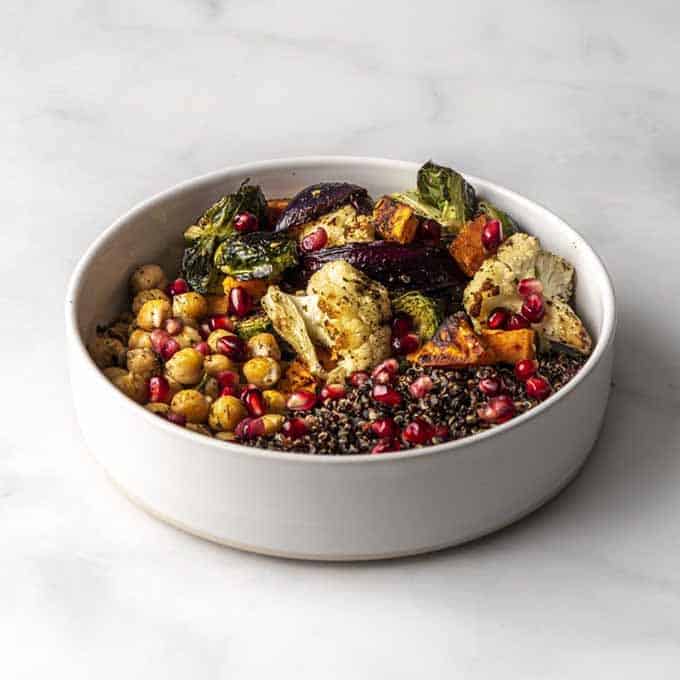 One of the drool-worthy recipes from Green Plate Club

All of the meal plans have been painstakingly put together to maximize efficiency, minimize food waste, and have been vetted by a university-trained nutritionist. (*cough*thatsme*cough*) You get tips for putting the meal plan together, a printable grocery list, and lots of really delicious recipes.

Best of all, you loyal HNL followers get a special discount! If you use the code HNL at checkout, you’ll get $5 off of an annual subscription. So that’s an entire year’s worth of meal plans for just $45.

Disclosure: I’m not making any money from this deal. I’m helping out with the site pro-bono at this time, so I have nothing to gain from encouraging you to try this out.

But, if meal planning is a pain point for you, if one of your 2020 goals is to make more home-cooked meals, eat more plant-based recipes, or to minimize food waste, I really encourage you to give this a try. If you’re a working mom who likes to support other working moms, take a look. If you just love delicious food, take a look.

I’ve been a huge fan of Kiersten’s recipes from the beginning, so I’m really excited that this dream is FINALLY becoming a reality.

We kicked things off this week with a new recipe for my favourite Instant Pot Pasta Sauce. Yes, you can make it even without an Instant Pot, it’s just faster and more flavourful if you use one. 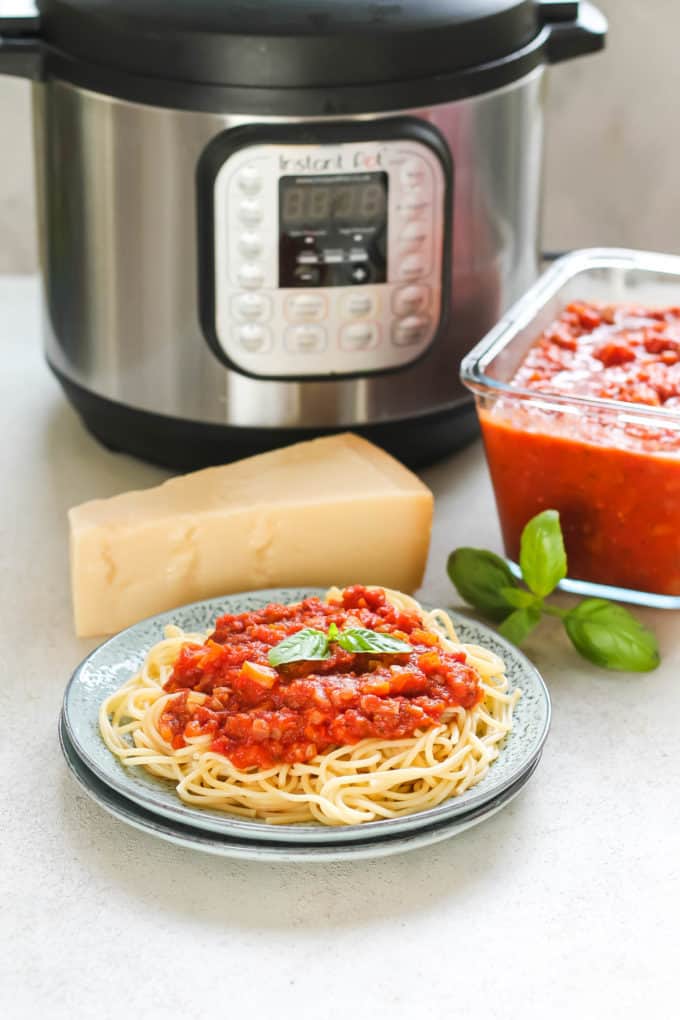 And because I want to be able to put that pasta sauce to good use, I also shared my favourite meatless lasagna recipe, Kale Lasagna with Cottage Cheese. So good. So cheesy. So comforting. 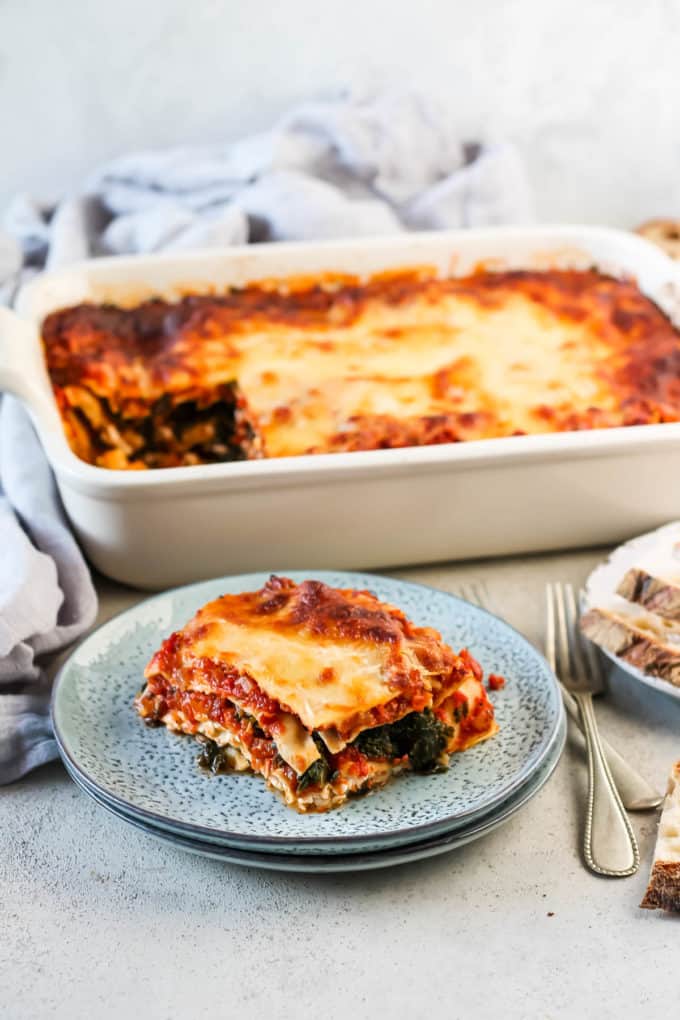 Here’s a look at what’s trending according to Google Analytics. We all know that Mung Bean Curry is always in first place, so we’re skipping that one over and starting from there.

1. Black Bean and Quinoa Freezer Burritos. This fan favourite shot up to the top spot this past week!

3. Slow Cooker Chickpea Curry. Got a batch of this cooking up for my lunches this week.

5. Chocolate Black Bean Smoothie. Beans in a smoothie. Get into it.

I made this on the weekend for a dinner this week and I’ve had it for 3 meals already and it’s only Thursday. This soup is hearty and flavourful and like a lil’ hug for your stomach… AND the fact that I can cook dried chickpeas in the IP without having to prep them makes my heart and brain happy. Great recipe, it’s going into our regular rotation. Thanks!

I know, Christine. I KNOW. 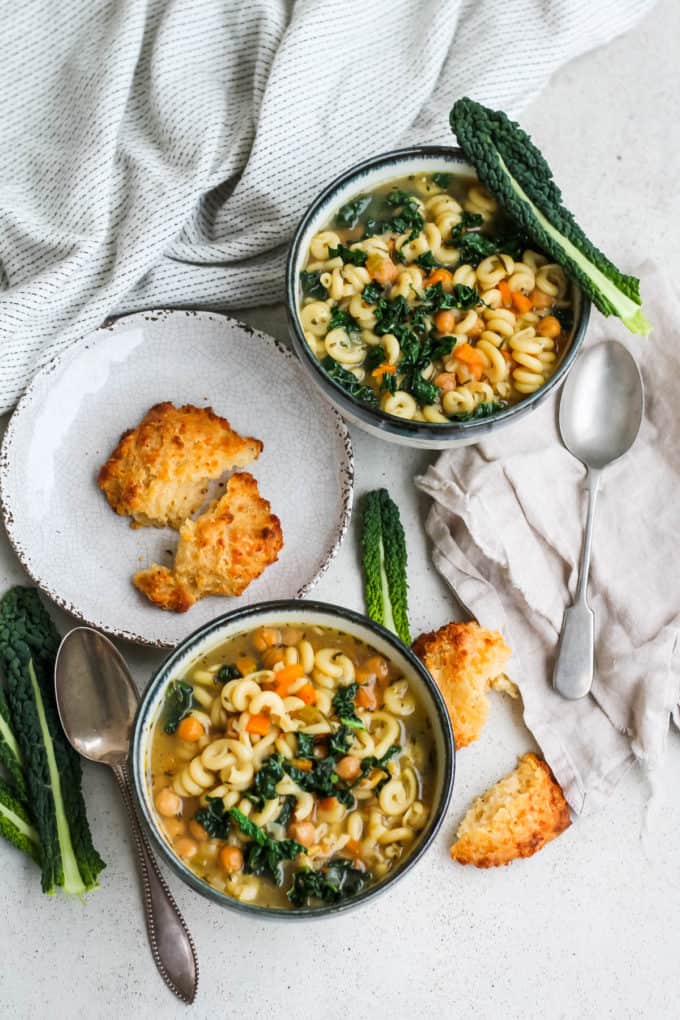 1. “Like sending bees to war.” The deadly truth behind your almond milk obsession.

2. The sublime profanity of chocolate milk.

4. How to be an environmentally friendly cook and eater.