Early Monday morning we had workers come in and turn our plumbing off. Bucket toilets were delivered. And thus began the final phase of our building’s pipe relining.

Also on Monday our contractor FINALLY sent someone over to finish the details in both bathrooms. Toilet paper roll holders were installed. Towel racks were installed. Shelves were put up. Counter tops were sealed with silicon. Paint was touched up. Grout was finished.

All in all it was about 4 hours of work that had been put off and off and off. But now it’s done.

On Thursday at around dinner time, after 3.5 days of pooping in a bucket and collecting all of our grey water to schlepp outside and pour down the storm drain, the workers came back in and opened everything back up.

And with that we concluded nearly 9 months of hellish bathroom construction.

I mean, Odin was only 5 weeks old when they tore our our bathroom on December 3rd. Look at him now! Standing, smiling, climbing up on everything possible. It is beyond bonkers that it went on for so long, but it did, and now it’s done.

What are we even going to talk about now?! 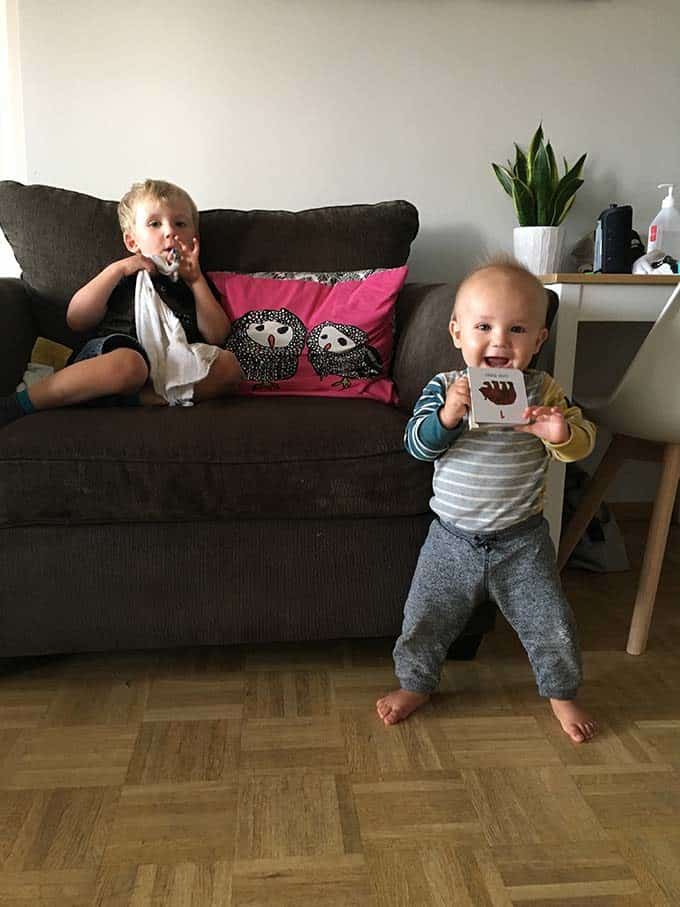 On Friday Paul went to pick up Niko from school and I brought Odin home to put him down for an afternoon nap. He’d taken a mega nap in the morning (three glorious hours!), and when he does that an afternoon nap is always kind of hit and miss.

But I put him down, and it seemed quiet. My home office shares a wall with his bedroom, and when I tip-toed in to grab my computer, for some insane reason I decided to slide the door open to peep at my sleeping baby. 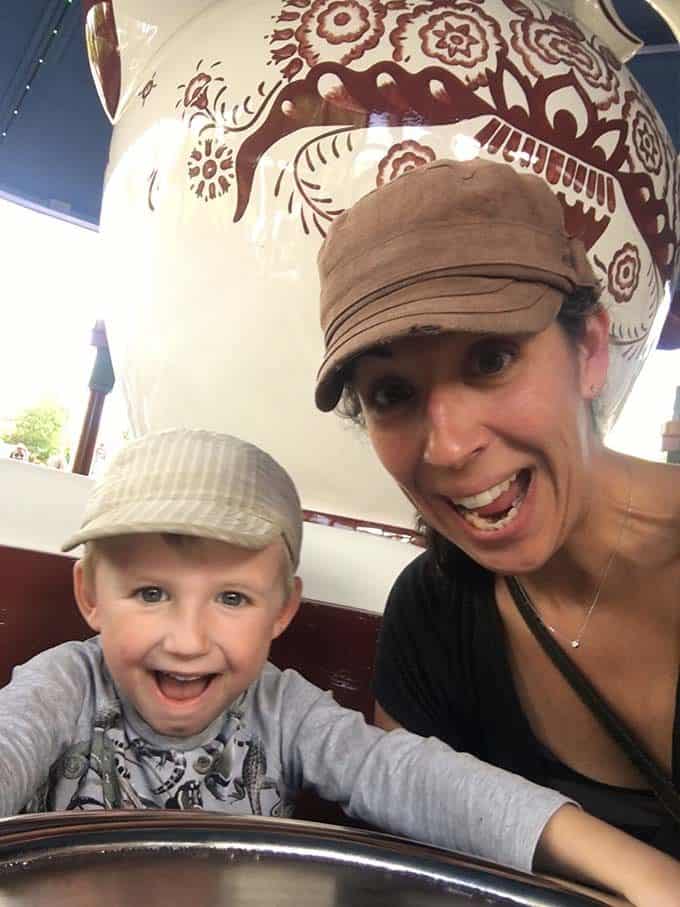 Saturday we decided to take the kids to Gröna Lund, our local amusement park here in Stockholm. It’s fun, but expensive and crowded and the lineups are long.

So while Paul and Niko were waiting in a particularly long line, I decided to buy a helium balloon for Odin to keep him occupied. I knew  that meant I had to buy two balloons, because I can’t buy one for one kid and not the other. Niko caught sight of the balloons already while he was still in line, and started fussing immediately because naturally I had bought him the wrong one.

I told him he could say thank you for the balloon and keep the one I’d bought, or he could have no balloon. His choice. But Paul took pity on him and after they’d disembarked from the drop of doom (kid’s edition) took him over to exchange his balloon for one that was, admittedly, much cooler.

And then I ended up pushing our stroller home, on a ferry, up a steep hill, on the subway, and the rest of the way home, with two g-damn mylar helium balloons bashing into my face, obstructing my vision, and bonking other people as we walked past.

Now they’re in our apartment and are somehow ALWAYS in the way, so I’m wondering how long I can reasonably wait before poking tiny holes into them and explaining that balloons just don’t last that long. 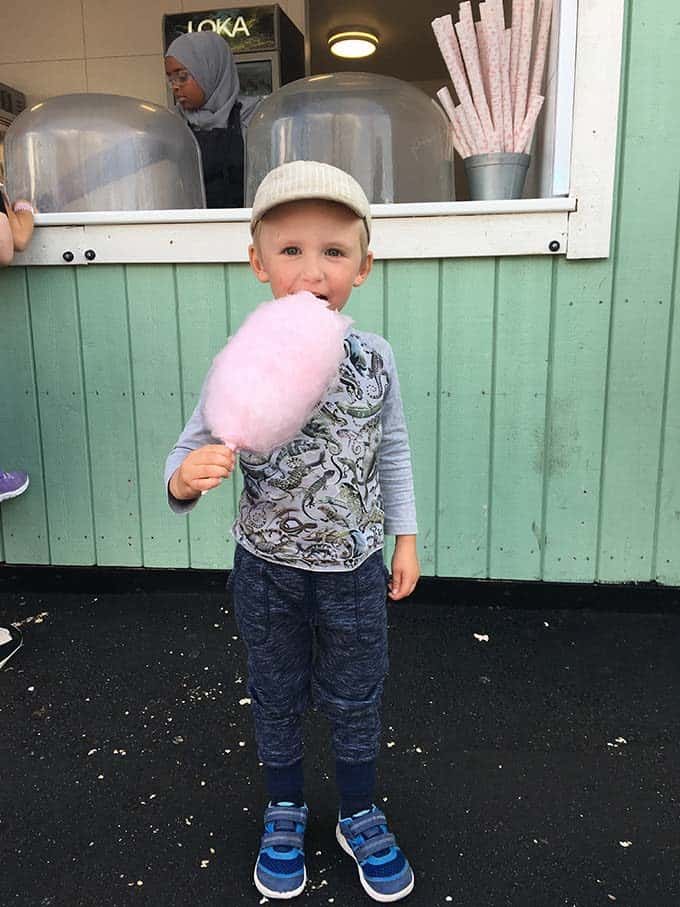 Paul really wanted to get Niko some cotton candy while we were at the fair, so he did. Niko was captivated with how they got that spun sugar on the stick, and thought it looked super cool.

He ate a few bites, maybe 1/8th of it in total, then asked for his water bottle and told us he didn’t want it anymore. Kids can, at times, demonstrate a remarkable capacity for moderation if you let them.

I think in this world where sugar, and especially sugar for kids, can be such a loaded subject, we often police them to the point that we create such drama and expectations around sugar we end up putting it up on a pedestal and remove their ability to self control. My kid LOVES sweet treats, and will put back an adult-sized bowl of ice cream if we let him, so it’s a delicate balance to be sure.

Overall I try to be chill about treats, though, with the hopes that they’ll have a healthy relationship with food. Anyways, I thought some of you might benefit from knowing that the Nutrition Lady lets her kid eat cotton candy, and he’s perfectly fine and healthy and not climbing the walls.

I like him to know about his food and understand it as much as possible. Earlier this week he climbed into bed with me in the morning as I was scrolling through Instagram on my phone. We came across a photo of these Mini Banana Muffins from Cook It Real Good and he asked if we could make them.

I knew we had three spotty bananas sitting on the counter and all of the other necessary ingredients, so we got up and got going on it. He mashed the bananas, dumped in the other ingredients (I measured, he dumped) and stirred everything together. They only took 15 minutes to bake, so it was the perfect quick recipe for a school morning.

I love that he loves to bake and cook, and although baking with small kids is an exercise in letting go (so much mess! so many sticky fingers in the batter over and over again!) I think it’s a life skill that’s worth nurturing from a young age.

We kicked off the week with hands down my favourite hummus recipe. This Chipotle Hummus is so easy to make, has a nice kick of heat from the smoky chipotle peppers, and is perfect in wraps, sandwiches, or just for snacking on. 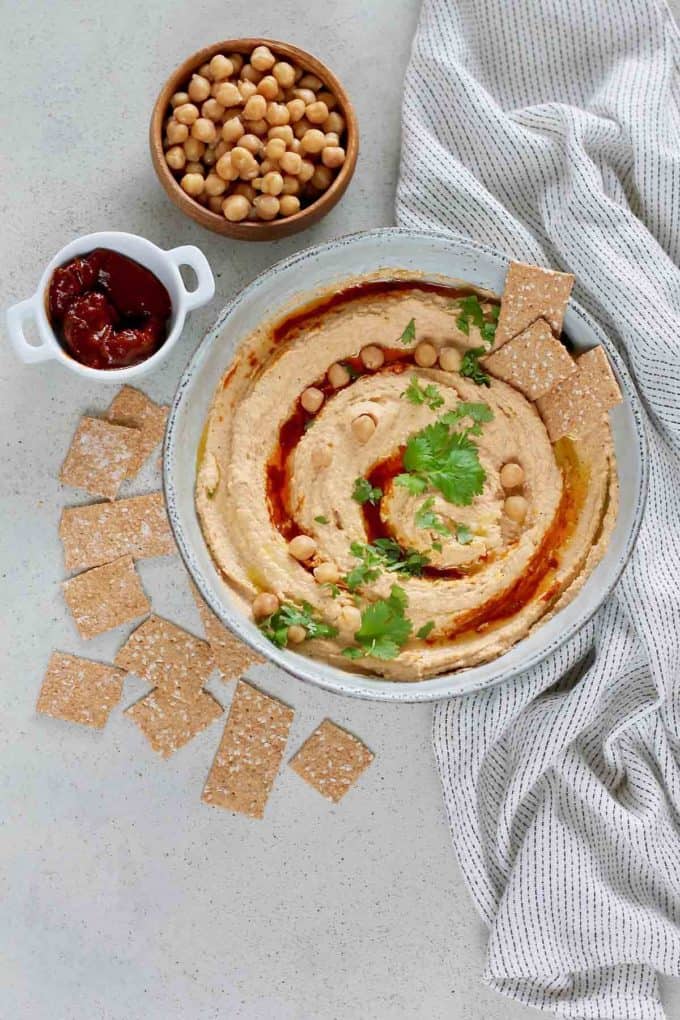 It always irks me so much when I hear people refer to themselves as being “naughty” for having a little treat, or being “good” if they don’t have one. So I’m talking up 10 Ways You Can Change The Way You Speak To Be More Body Positive. 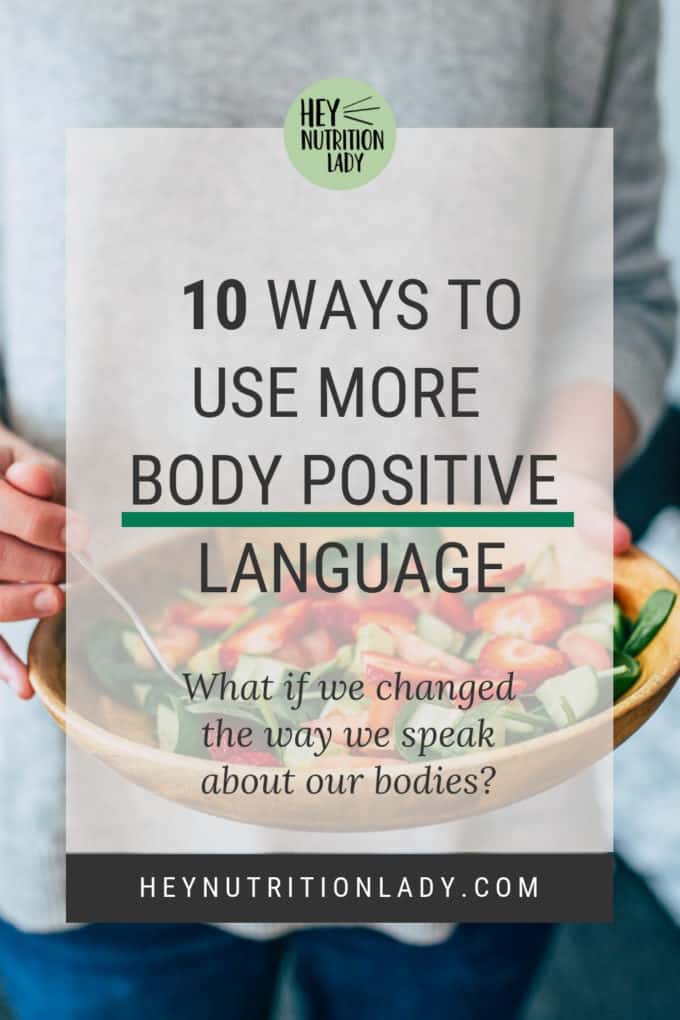 Since lunch packing season is here, and I know you want to know what to do with that Chipotle Hummus, I revised an old recipe for Spicy Vegan Wraps. I’ve been lunching on these all week and they’re soooooo good! 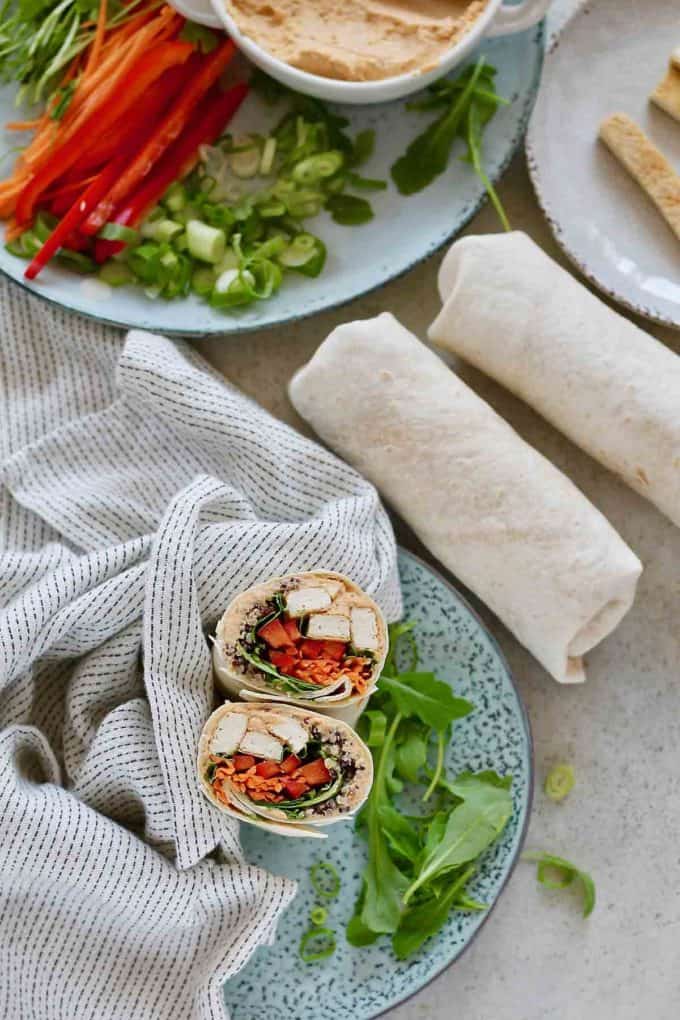 Last but not least, since lunch packing season is upon us, I rounded up 22 Vegetarian and Vegan Sandwiches to kick your lunch packing inspo into high gear. There are soooooo many drool worthy sandwiches and wraps in here, so be sure to check it out. 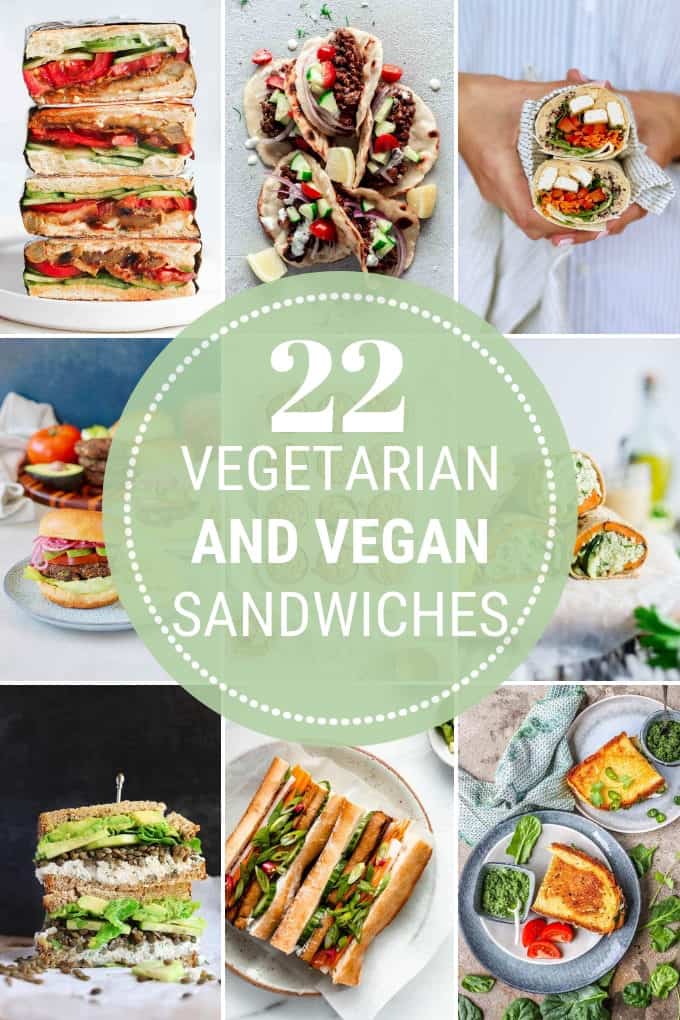 1. 22 Vegetarian Lunch Ideas. This is the Buddha Bowl and Grain Salad edition.

2. Turmeric Latte Mix. No need for expensive coffee shop turmeric lattes when it’s so easy to make your own.

4. Slow Cooker Chickpea Curry. I’d like to cozy up with a bowl of this right about now…

5. No Sugar Banana Bran Muffins. I’m making up another batch of these today to stash in the freezer.

1. This is an excellent article written by one of my favourite intuitive eating dietitians: WW’s new weight loss program for teens is not just worrisome, it’s dangerous.

2. Natural sugars vs added sugars: do our bodies know the difference?

3. Here’s the secret to baking success that all professionals swear by.

4. Are beans and whole grains making us sick? (Spoiler: nope)