Hey, happy Sunday, eh! I’m writing to you from Canada this week, so, yes, we made it in one piece.

I’m not going to lie, I 100% feel that I’ve unlocked a new level of parenting badassery by undertaking the trip from Stockholm to Vancouver by myself with two kids, and that if they gave out a version of Girl Guide badges for parents I would have just earned the All Round Cord PLUS a lifetime supply of free cookies. 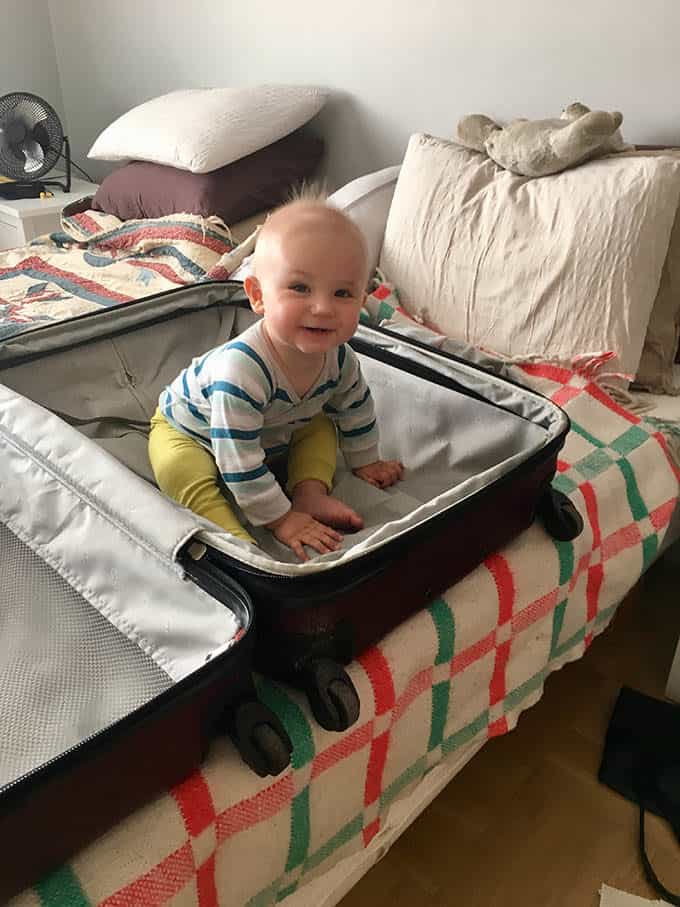 I did enquire but they said I couldn’t check him…

I was prepared for the worst, but honestly, the trip went really smoothly. Both of my boys were absolute champion travellers to the point that I got compliments from dozens of fellow passengers as we disembarked the long haul flight.

I expected that Niko would do well since he’s a pretty seasoned traveller already and we had an arsenal of toys and games and videos to keep him entertained, but I was worried about Odin, especially since he’s now crawling. But he did great, was super chill for both flights, and charmed people all around him with his drooly two-tooth grin over the back of the seats. 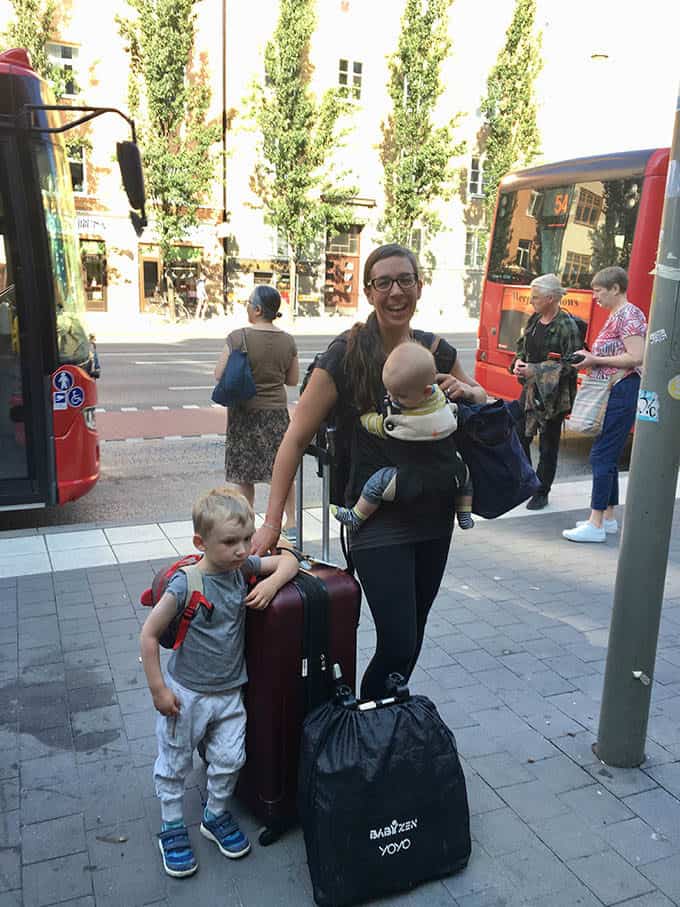 I don’t know if she was an actual grandmother or not, but I tell you, I could not have picked a better seat mate out of a catalogue. She was a stylish lady on her way back from a walking tour of Tuscany, and ended up seated next to Niko, across the aisle from her husband. She chatted with Niko, asked to see his toys, and let him drive his cars on her side of the arm rest.

She helped Niko open packages, took garbage away, and asked him sincere questions about the way his trucks worked. She held Odin when I needed to take Niko to the toilet.

When dinner was served I couldn’t put my table tray down because Odin was on my lap and would have grabbed at anything on the tray, so we put Niko’s down and had both of our meals on his tray. This lady helped Niko with his dinner, keeping the trays stable, buttering his bread and opening his cutlery and finding his napkin, and then helping to get the trays cleared as quickly as possible. 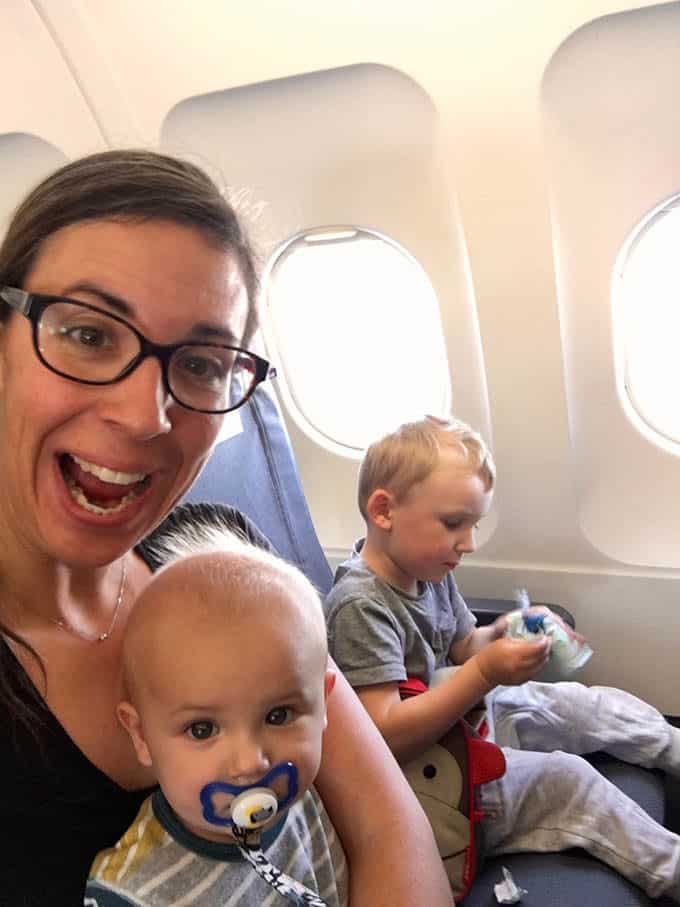 When she saw that Niko was having trouble going to sleep, she turned off her movie as to not distract him, and closed her own eyes so he’d know it was time to sleep.

I’m sure we would have survived the flight either way, but if we’d had some douchey business man sitting next to us who was annoyed by my kids it would have been a lot less pleasant.

If anyone knows a lady named Christa from Maple Bay, BC, please tell her she’s a literal angel sent from heaven. I thanked her when we landed and she said she didn’t really do that much, but for me she made a world of difference. 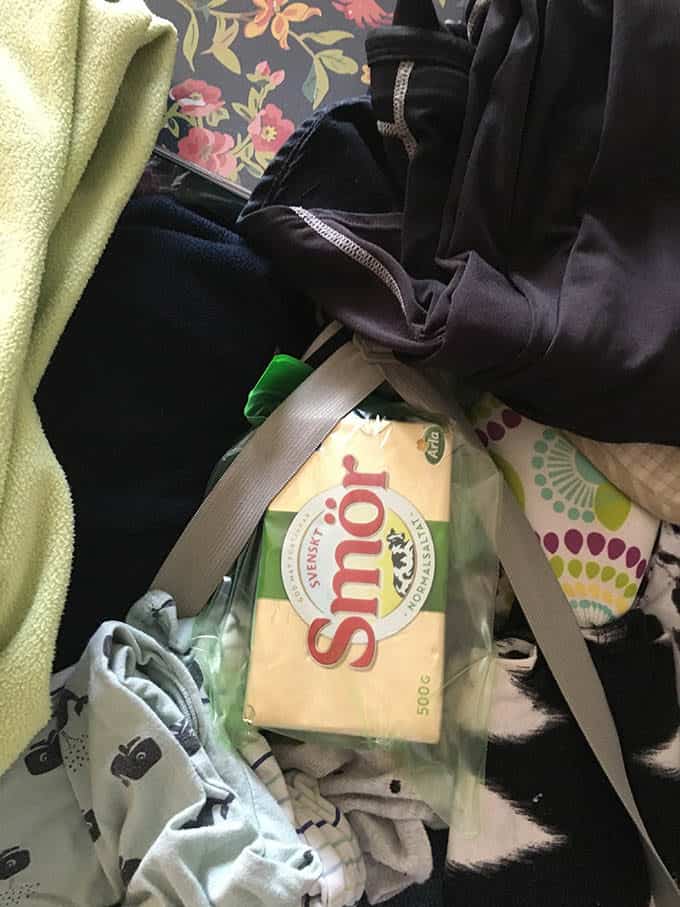 Good news! The Swedish butter I smuggled in for Sarah arrived safe and sound.

Beyond the flight the other thing I was most dreading was dealing with two jet-lagged kids. I try my best to be patient since I’m the a-hole who dragged them across nine time zones, but man does it ever suck when you’re running on 2 hours of patchy sleep in a 48 hour period and your kids wake up 30 mins after your head finally hits the pillow.

My friend Alison had tried giving her daughter some kids melatonin after their last trip and said it was the easiest jet lag experience they’d ever had. She gave me some of her stash to bring on this trip, and I figured I’d give it a try.

Our first night was pretty rough, as is expected, but on the second night I gave Niko a melatonin gummy about an hour before bedtime and he slept through the night. I couldn’t believe it!

I’ve done this trip a lot of times with kids and in my experience it’s usually two really bad nights and two moderately bad nights on either end. To have him sleep through the night on the second night is absolutely unbelievable to me.

Obviously I can’t give them to Odin (I wish!) so he was still up in the night, but Niko slept through all of his wake-ups, and let me tell you dealing with one jet-lagged baby in the night is a hell of a lot easier than two.

We used these Zarbee’s Natural’s Children’s Melatonin Gummies (looks like Amazon has them on sale right now) and they were great. I’m stocking up so I’ve got some more for the return trip, because the jet lag is always way worse going in that direction. 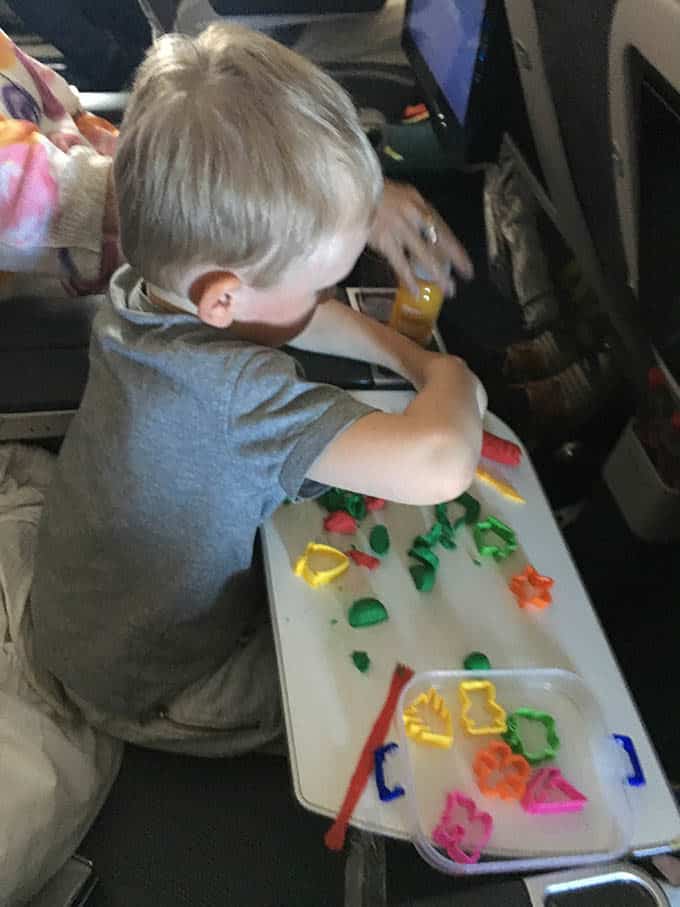 The main reason I decided to fly out to BC a couple of weeks ahead of Paul is that my cousin was throwing himself an epic 50th birthday bash and threw it out there that if I wanted to come early, I should come. When he made that suggestion I thought you know what? I’m going to do that.

I’ve been working for most of my “maternity leave” and figured I may as well do something that made me feel like I’d had an actual break. Plus, when is the next time I’ll have an opportunity to bring my kids to Canada for a full six weeks? Who knows.

On my dad’s side of the family there is a genetic neurological movement disorder called dystonia. My cousin (my actual cousin, the birthday boy is her husband) inherited the gene, but I never thought of it as being a big deal because other than walking a bit funny, it didn’t seem to impact her life too much. (I now know I was wrong about that.)

In 2017 their then 8-year-old son was also diagnosed with dystonia, and he went from running on the beach and playing like a normal kid to being unable to stand on his own and in a wheelchair in a matter of a few months.

Not responding to medication and with his condition only becoming worse, they made the difficult decision to undergo deep brain stimulation (DBS) surgery, and the results were incredible. Kiddo is back to running and playing, and other than having to charge the battery pack in his abdomen for 20 minutes each day, he’s like a normal kid in every other way.

My cousin decided to take the opportunity of his 50th birthday to raise awareness and funds for dystonia, so threw a birthday party-come-fundraiser on the spectacular rooftop of a building in downtown Vancouver. There was delicious food, lots of wine, live music, a magician, and many moving speeches.

In lieu of gifts he asked for donations to the Dystonia Medical Research Foundation to fund clinical research on the efficacy of DBS surgery, and ensure that this procedure becomes a more widely accessible standard of care, especially as an early intervention for children, as this has been life changing for their family.

They managed to raise a staggering amount of money for this cause, and my cousin personally matched all of the donations to double the amount.

I’m going to do the same: if any of my blog readers make a donation to the DMRF this month, I will match the donation up to the monthly ad revenue that Hey Nutrition Lady earns in the month of June.

This cause is near and dear to my family, and every little bit helps. Just message me for details if you want to make a donation ✌???? 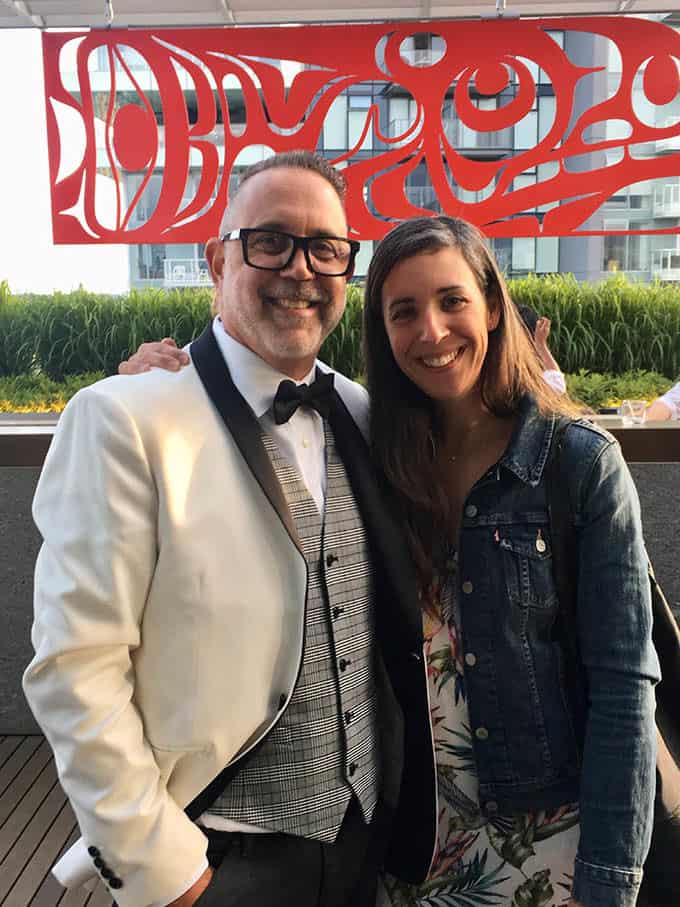 The man of the hour

We kicked off the week with this super simple recipe for Strawberry Chia Jam. It’s a blended jam to make it a bit more kid-friendly (they’re weird about the seeds), but you can also do an un blended version as you wish. 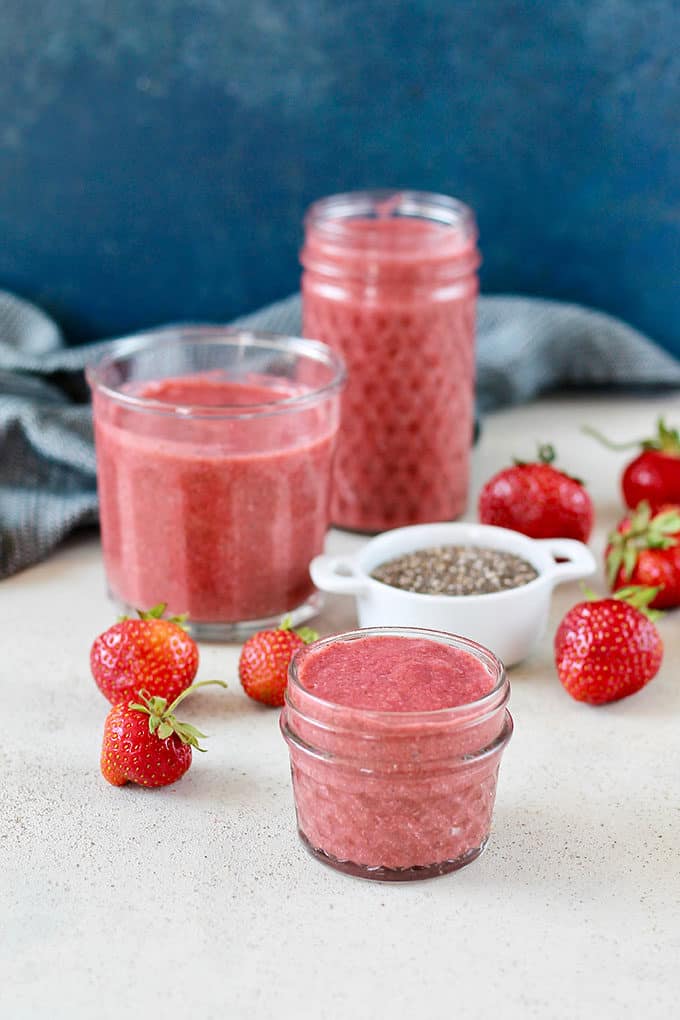 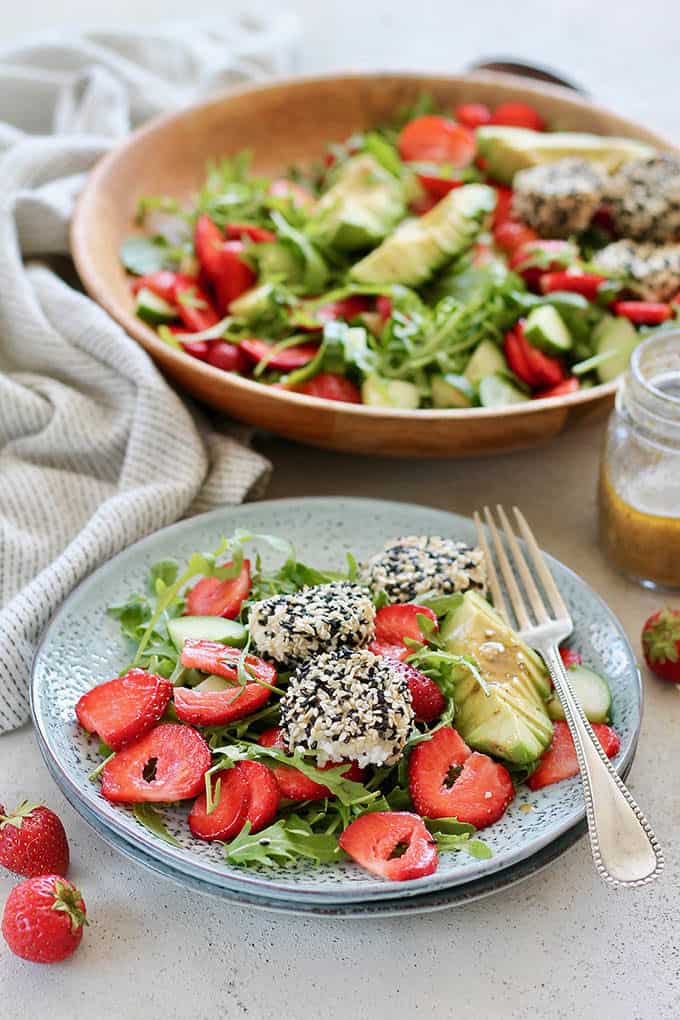 Lastly, I put together another Simple 4-Part Meal Prep Plan featuring recipes from some of my favourite bloggers. This one includes 15-minute chickpea gyros, a simple curry, delicious lemon tahini sauce, and my favourite healthy cherry muffins.

1. Pan-fried Broccoli with Sesame Egg Ribbons. This quick and easy meal came out of nowhere and shot up into the top 5 this week!

5. 37 Vegetarian Freezer Meals for New Moms. So many tasty options in there!

1. Most of what you know about protein is wrong.

5. Here’s how to overcome the three most common poop shame scenarios.