Do you guys smell that?

That smell is me and I am cleeeeeean because I just showered in my own home for the first time in months. Five and a half months. One hundred and sixty-seven days, to be exact. 167 days!!! 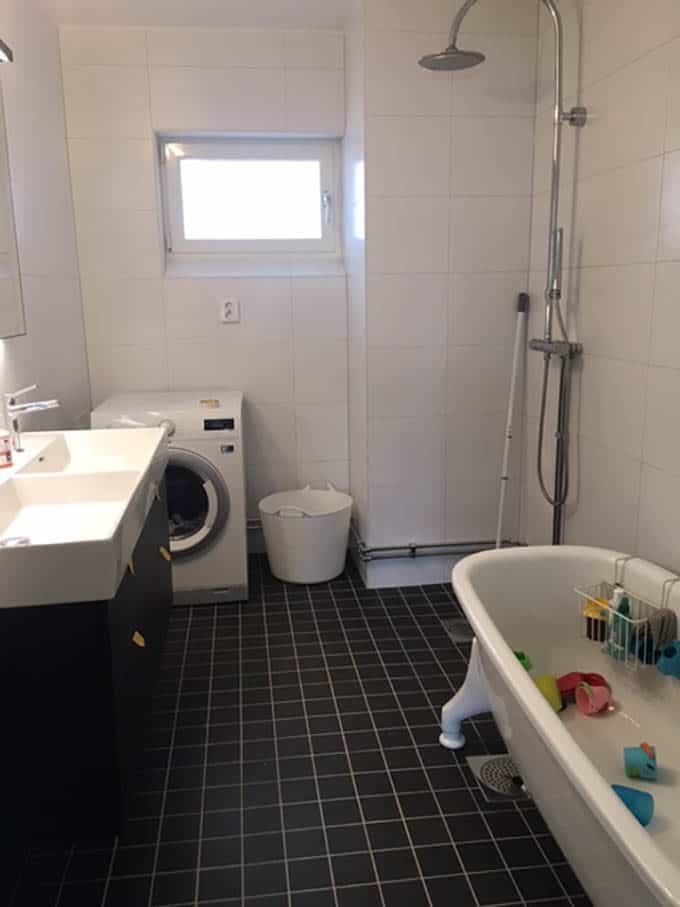 The bathroom is not done, but it’s functional, and that’s what matters. The bathtub is in. The sink is in. The LAUNDRY MACHINE IS IN!!! The shower is in but has no stall around it, but I bought a floor squeegee so who cares. The toilet is NOT in because the plumber broke a tile behind it when he went to mount it, so that needs to be redone on Monday.

Still to come is some sort of structure around the shower. They straightened the walls when they did the tiling and so the old door doesn’t fit there anymore, and we’re having creative differences regarding what should go in it’s place. My contractor and I have a hot date this week to return some tile and choose some new fixtures, so hopefully we’ll be able to come up with a solution for the shower door that makes everyone happy. 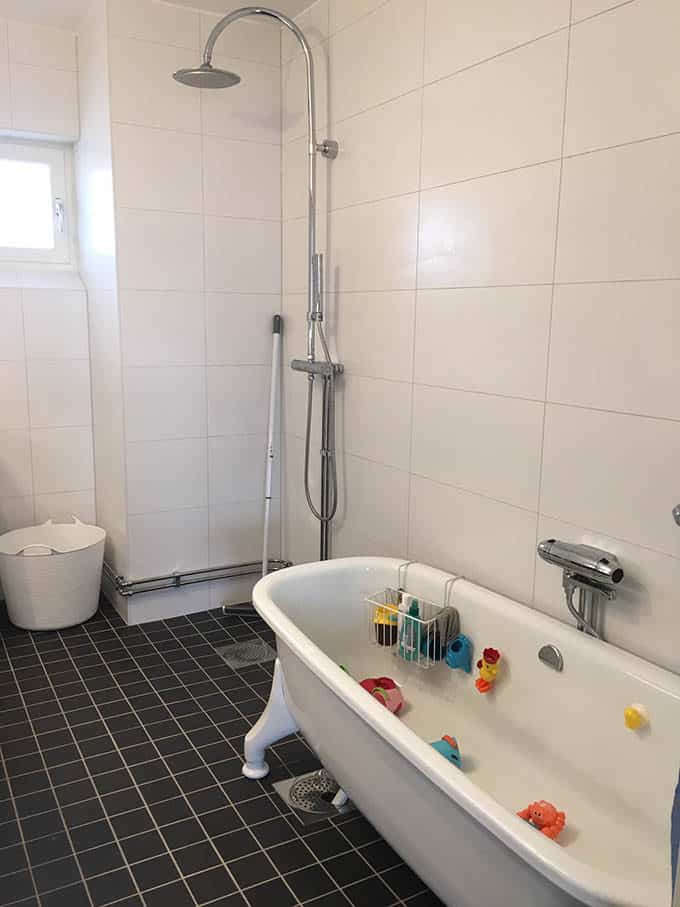 There is going to be a counter top installed over the laundry machine, which will be a place for folding laundry (and changing diapers) and there will be a small cabinet built in the space beside the laundry. 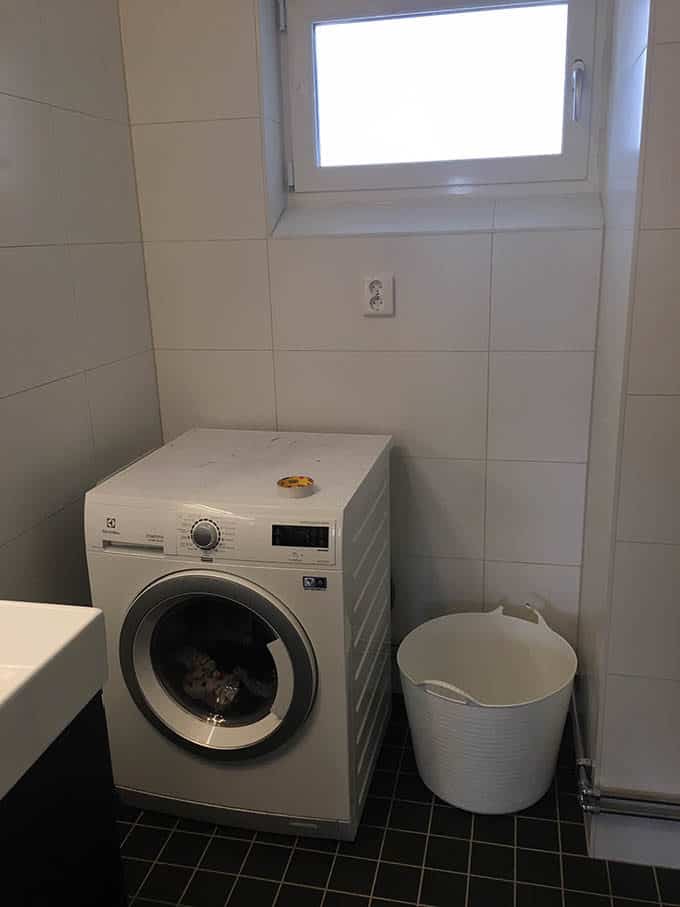 Over the wall-mounted toilet tank there will be a shelving unit that goes all the way up to the ceiling. The contractor and I were discussing the width and depth of the shelves to go there and he asked if I was planning to keep “all my makeup” there. Right. “All my makeup” consists of one tube of lipstick, one tube of mascara, and a janky palette of eyeshadow, all of which is horrifyingly old to anyone that knows about makeup. So I’m not concerned about finding enough space for “all my makeup” thank you very much. 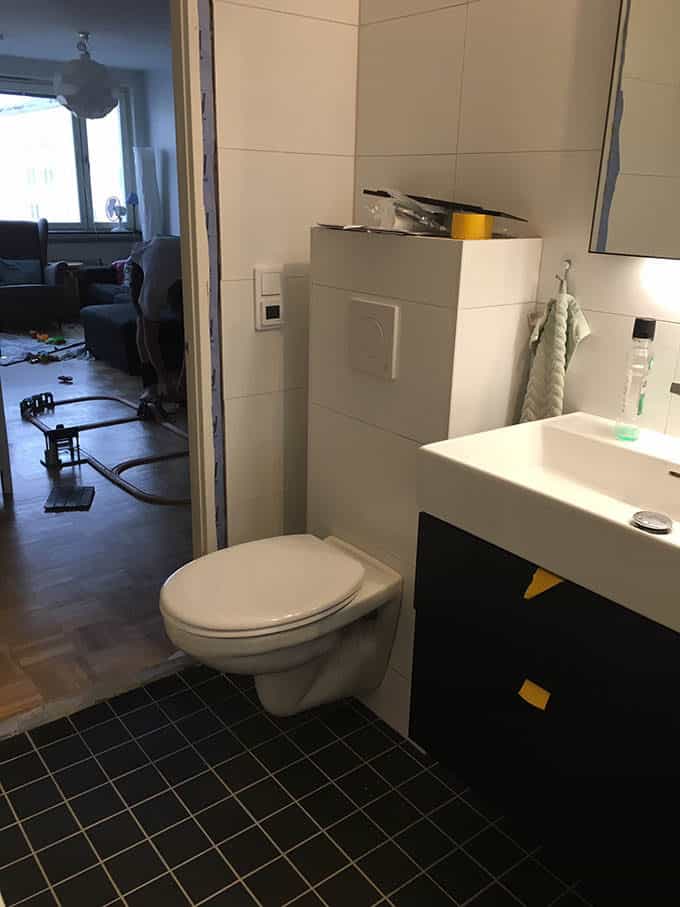 We’ll be getting a two-week respite from construction in our apartment, and then he’ll come back to start demolishing the guest toilet, which we’re redoing so that both bathrooms are updated.

But! But! But! Literally the same day our bathroom was finished enough for our kids to have an actual bathtub bath for the first time, we got a note through our door about the upcoming overhaul of plumbing in the entire building, informing about some days that the drains will be fully closed and asking if people want to order a bucket toilet. The universe realllllllly wants me to poop in a bucket, it would seem.

I think between the plumbing work in the building and redoing our small bathroom, the construction will continue right up until when we leave for our summer trip to Canada, which essentially means we will have lived through nearly 8 months of this nonsense. I sure hope it’s worth it in the end! 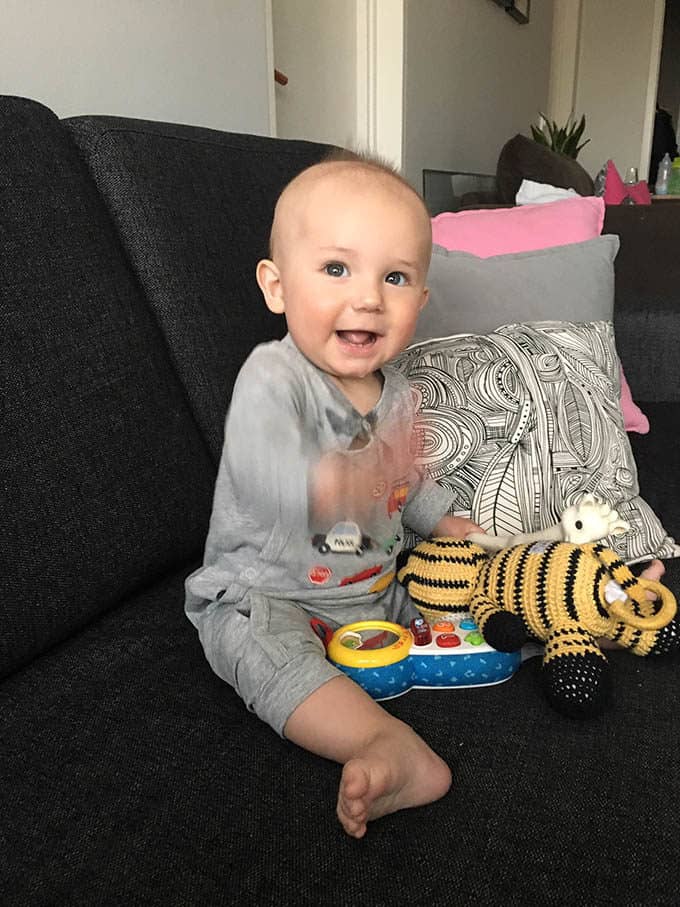 Living in Sweden means that we suffer through dark-ass winters, but in the summer there is a pretty sweet payback with endless daylight. Pretty sweet for grownup people who enjoy things like drinking rosé in the park when it’s still sunny at 10pm, but not so much for the small folk who are confused about what’s an appropriate time to wake up in the morning.

By the middle of this week the sun will be coming up in the 3’s, and since I’m already far more sleep-deprived than I’d like to be (Odin is a dick about sleep and has undone every round of sleep training we’ve done so far) I decided I needed to work on a blackout solution for the kid’s room.

We do have roll down blackout blinds in there, but a lot of light seeps in around the sides. I bought these Gro Blinds which you stick directly to the window with suction cups, and while they *did* make a difference, they were such a pain in the ass to stick on each night I basically abandoned them after three nights. If anyone has used them and has some hack for making them more user-friendly, hit me with your advice!

Instead I’ve Macgyvered my own solution by putting sticky velcro tape on the inside of the roll-down blinds, so that when I pull them down I can stick the blinds to the window frame and blocked out most of the light. It’s working, ish, but also means we can’t really open the window in there. In any case, it’s bought me another hour (ish) of sleep for the big one, but isn’t fooling the small one one bit. 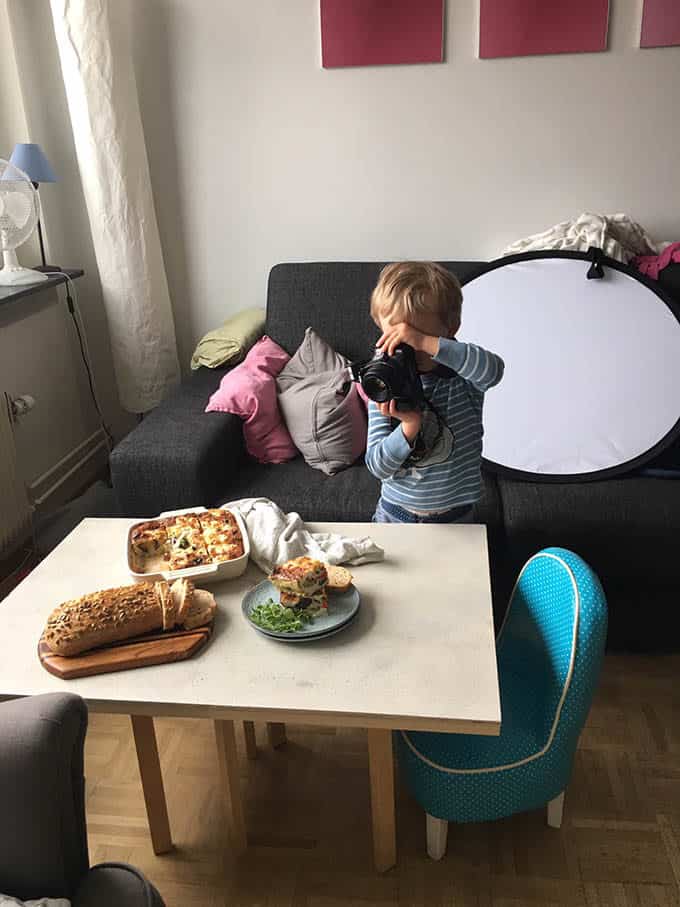 This summer I’m flying back to Canada by myself with both kids. As in no extra set of grown up hands to help me wrangle my tiny monsters on two international flights, one of them for 9.5 hours. Pity the fool who ends up stuck sitting next to me and my two kids.

Since entertaining small kids on a long haul flights requires an endless arsenal of snacks, new toys, books, old toys, colouring books, bottles, diapers, changes of clothes, etc, I’m trying to avoid traveling with my camera, which would have to go in my carry on bag. So I’m trying to work ahead and shoot approx eight weeks worth of content before we go.

I tell ya, nothing makes me sweat like trying to finish up a photo shoot before my kids come back home. Today I knew I wasn’t going to make it, so I decided to spend the time I had cleaning up the kitchen so that Paul would not lose his ever loving mind at the bomb that had gone off in there, and figured I’d just finish photographing the last dish after they got back.

Niko got right into it and decided to “help” me out. Turns out three-year-olds are useless at holding bounce boards. We’re not using the photos he took, but I do like his technique.

If anyone has tips for flying solo with kids, hit me with them! Is it legal to sedate them on the long flight? Asking for a friend… 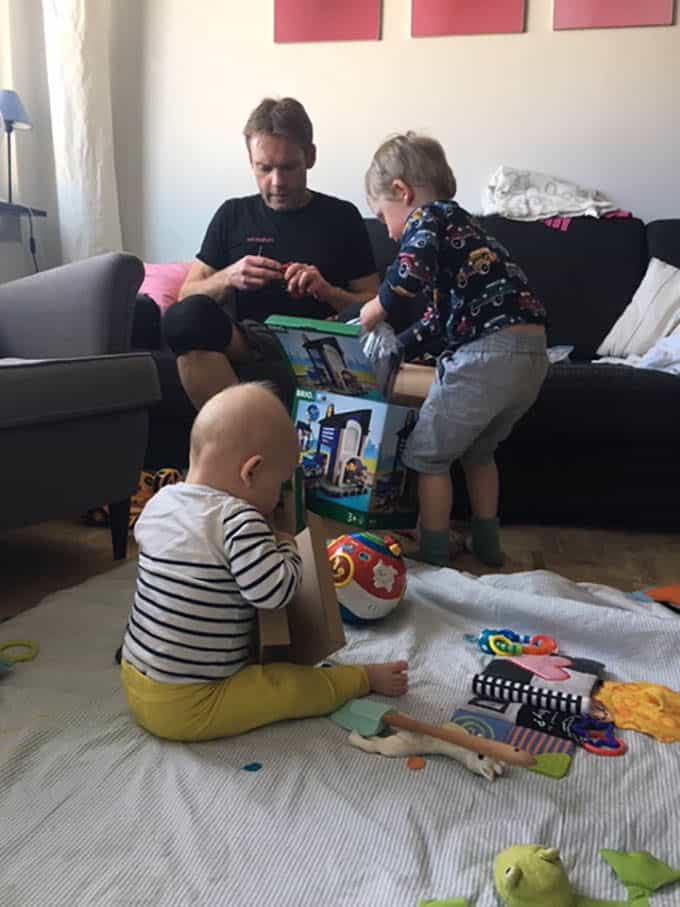 It was Paul’s birthday this weekend. He and Odin both have birthdays on the 18th, so Odin was 7 months and Paul was 528 months yesterday. Paul told me that he wanted more pieces for our Brio train set so that he can work on constructing an epic train set that spans the entire apartment. What a dream.

I ordered him some train stuff from the kids, and when it got delivered Niko lost his little mind wanting to see what was in the box. I took him aside and quietly told him that it was train stuff for dad’s birthday but that it was a surprise and we’d give it to him on Saturday. Paul later told me that Niko took him and showed him the box and said, “It’s train stuff for your birthday, but you can’t have it until Saturday so look surprised.”

We had a family celebration on Friday with cake and gifts (I also got Paul this bitchin’ new santoku knife and a set of whisky glasses) and on Saturday we booked our babysitter and went out for a dinner sans kids. The meal was nothing to write home about, but it was a really lovely evening just the two of us.

On the way home we decided to stop at a bar for one last drink, and they had a cocktail called the Ryan Gosling which was basically like, hey girl, I know you want to drink me. There really wasn’t anything to do but sip on the sweet, sweet Gos. He was every bit as delightful as you might expect. 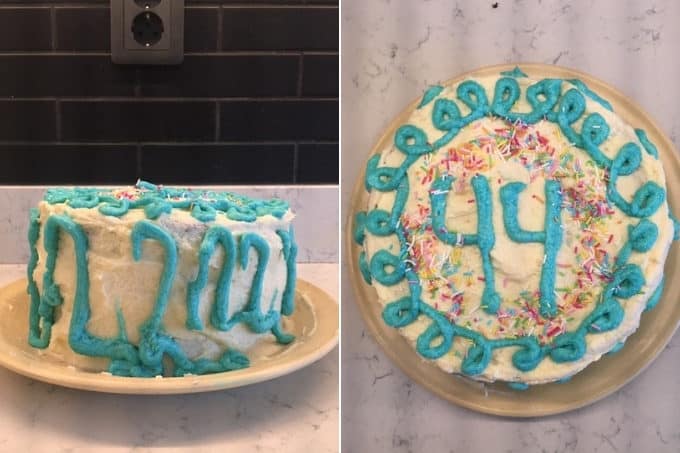 Colour scheme by Niko, execution by yours truly. I know, I know. But I can’t start a cake decorating blog. It just wouldn’t be fair to the other people.

I kicked off the week by sharing my favourite Vegetarian Caesar Dressing Recipe. It’s made without eggs or anchovies, but has amazing flavour thanks to roasted garlic and capers. This version is lightened up with some Greek yogurt, so it’s creamy and thick, but without all that much oil. It’s my favourite Caesar dressing of all time, so I hope you’ll like it as much as I do. {Pin this} 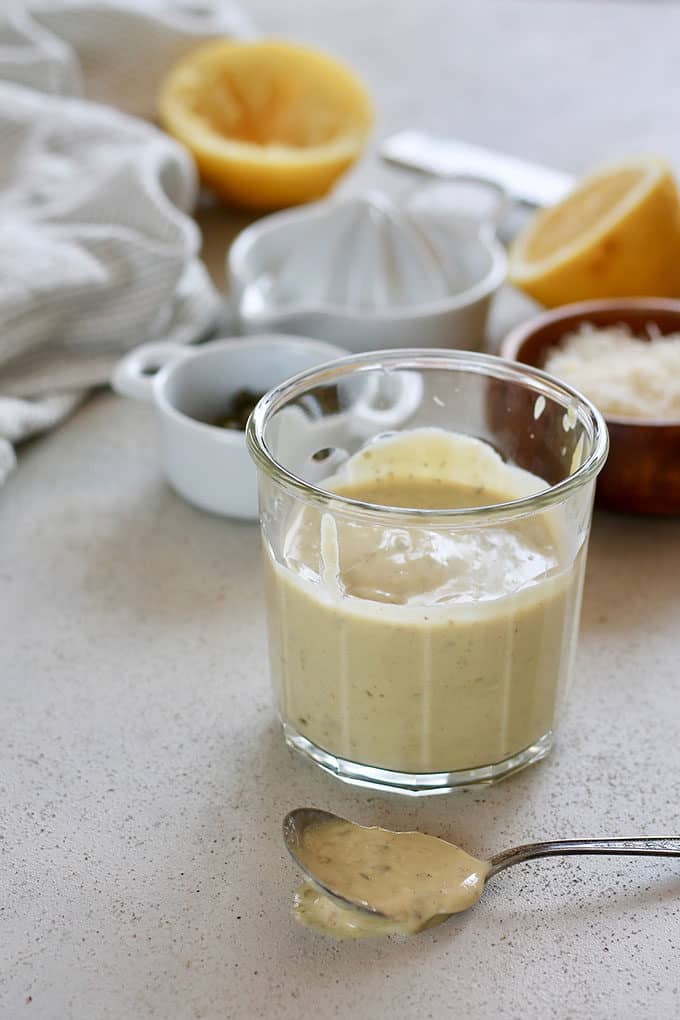 I also updated and re-published an old favourite: This cool and refreshing Vegan Rice Noodle Bowl is packed with Asian flavours. It’s totally gluten-free, and has a zippy peanut sauce to complement. You can mix and match the vegetables as you see fit, to make your noodle bowl your way, which makes this healthy recipe family-friendly and versatile as well! {Pin this} 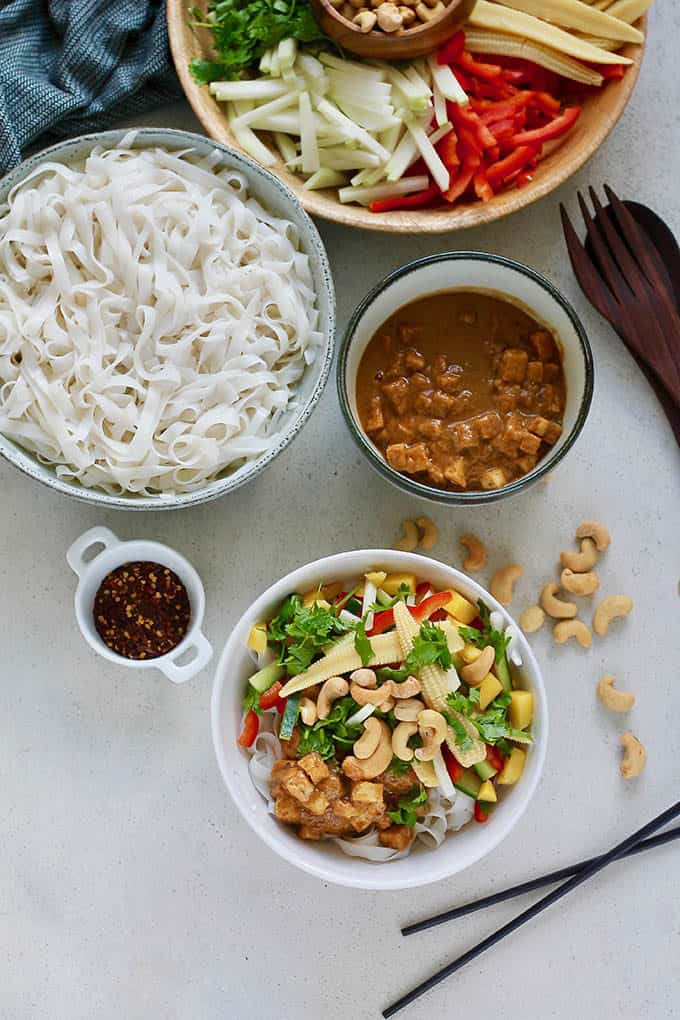 2. Is Popcorn Healthy? Munching on a big old bowl of p-corn as we speak! {Pin this}

3. Carrot Apple Ginger Smoothie. This one’s got some zing to it. {Pin this}

5. Chocolate Black Bean Smoothie. Yasss! Get those beans in your face! {Pin this}

3. Do processed foods make you fat? A new study has stunning results.

4. Nothing like a good rebranding initiative: The FDA is proposing changing the name of a healthier alternative to salt.

5. How to get the best from your immune system.