Heyyyyyy-o! Big news everyone: our big boy is officially out of diapers!

This round of potty training went soooooo much more smoothly than our previous attempts, and although he pitched a fit on when we first took away the diapers, he was clearly ready for it. There were a couple of accidents on the first two days, but nothing since then.

I think it helped a lot that we started on Easter weekend, because we made several “phone calls” to the Easter bunny who advised us whether or not we could give Niko extra chocolate depending on whether or not he’d peed in the potty. He also told us that if Niko peed his pants we’d have to take the chocolate away – turns out the Easter bunny is kind of an asshole, but *very* helpful with potty training. 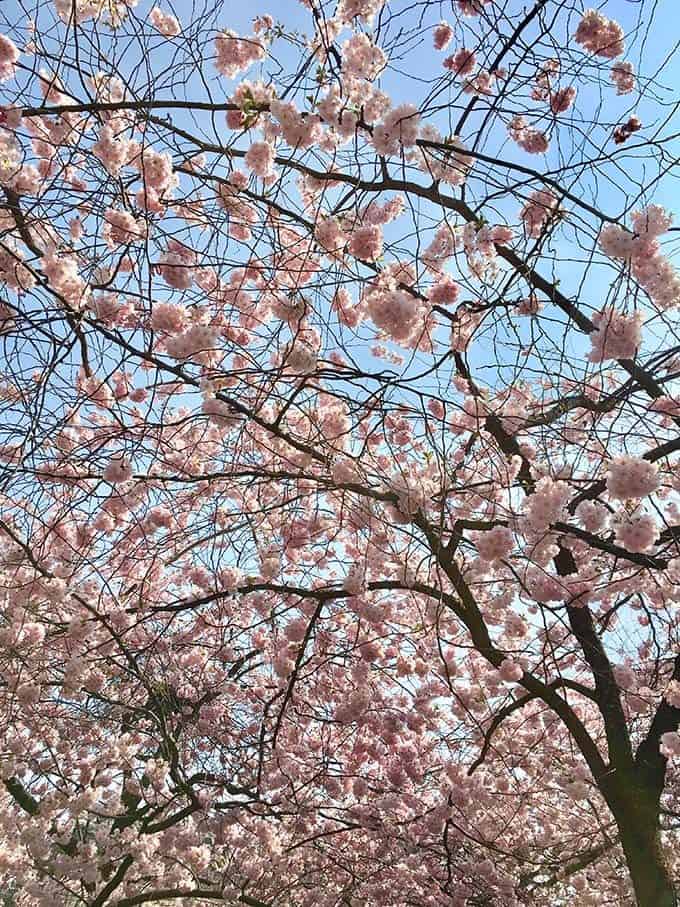 And his clout isn’t limited to Easter weekend, either. After a full week out of diapers Niko was still resistant to trying the big toilet and only wanted to use the potty. One quick call to our bunny pal and a mention of an extra treat and he was right up there on the big toilet and hasn’t looked back.

(Wait, why do I think the Easter bunny is a boy? Is that a thing? How does he lay those chocolate eggs? Are those eggs really made from chocolate?!)

Yesterday we even tackled public toilets for the first time, which I was super nervous about, but it went great! I had a long day out with the boys and schlepped the potty around all day just in case, but didn’t need to pull it out. He also graduated to wearing underwear. The book we read (Oh Crap) recommends going commando for a month or so because underwear may feel too similar to diapers and trigger muscle memory) and is super proud to rock his cool new Paw Patrol gitch.

I told Niko that every time he used the potty I’d give him a sticker, and once he had a full sheet of stickers I’d take him to the toy store and buy him ANYTHING he wanted. So yesterday we went to the mall with my credit card burning a hole in my pocket and scoped out the toy store. He chose this toy chainsaw, which cost me around $30, so I think I got off pretty easy. 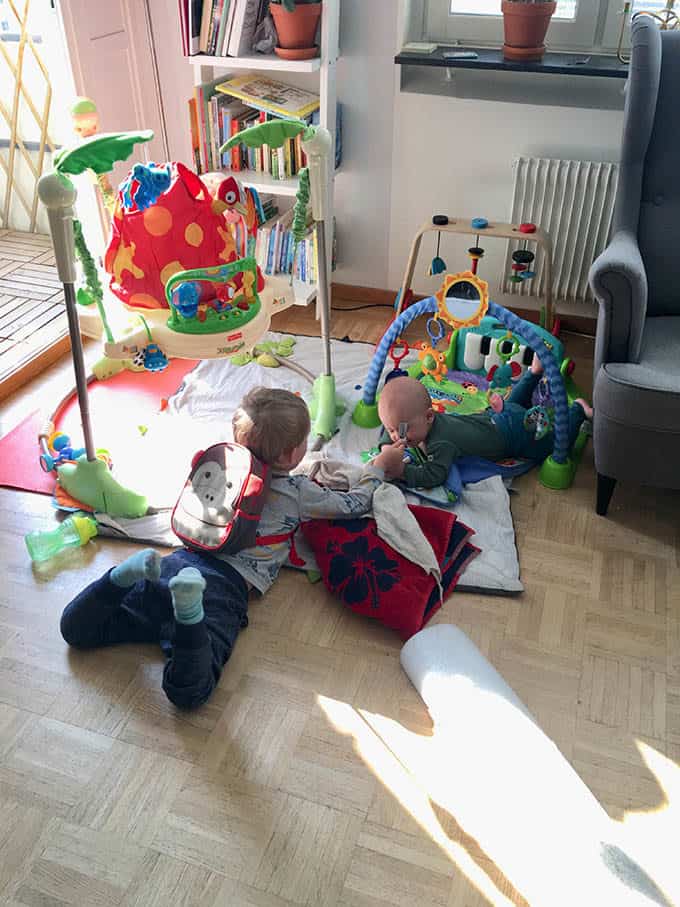 Overall, I think that Oh Crap is a good book and the method outlined is very effective. HOWEVER, the author makes you feel like you’re a terrible parent if you don’t have your child fully potty-trained by the time they’re two. We had much more success with this round in part because Niko was a year older (he’s just over three now) and really got it this time. We also used a modified approach based on who our kid is (lots of outings between pees, bribery and rewards) rather than rigidly sticking to the method in the book like we did last time, which just resulted in us all being stressed out, exhausted, and ready to throw in the towel after four days.

We’ve got this Baby Björn potty seat which we’re using on our toilet now, and were using this “Smart Potty” before we graduated to the big toilet. I’m still using pull-ups at night, but they’re coming off dry most mornings so I’m hoping we can ditch those as well soon. 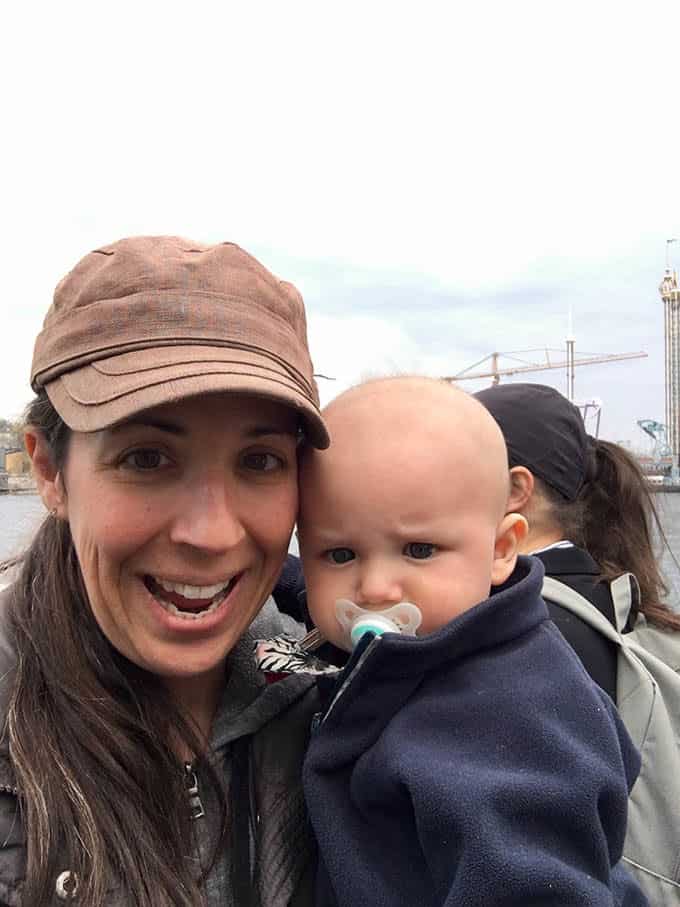 On a ferry and very uncertain about the whole thing

In other milestone-related news, I started wearing pants with zippers again this week!

I’ve been living in stretchy pants for longer than I’d like to admit, which says a lot because I’m pretty comfortable admitting that my wardrobe is almost entirely comprised of stretchy pants. But the other day I had a business lunch to attend and realized that the pair of elastic-waisted mom jeans that had been serving as my “dressier” option were splattered with baby food.

I debated whether I should bust out my “formal” yoga tights (not even kidding) or wrestle myself into my pre-pregnancy jeans. I chose the latter, and though I certainly wasn’t comfortable, it wasn’t as bad as I was expecting. I know it can be a challenge to be in a changing body, and I’m also very aware that I haven’t been prioritizing self-care (including moving my body) nearly as much as I should be.

So I finally renewed my yearly pass to the swimming pool. Swimming is great because I get to be totally alone, they have showers there, and I do my best thinking with my head underwater. It feels good to be back in the water after such a long time, now the trick will be actually making time to swim a few times per week.

(Aside: have you guys seen Workin’ Moms on Netflix? If not, get to it!) 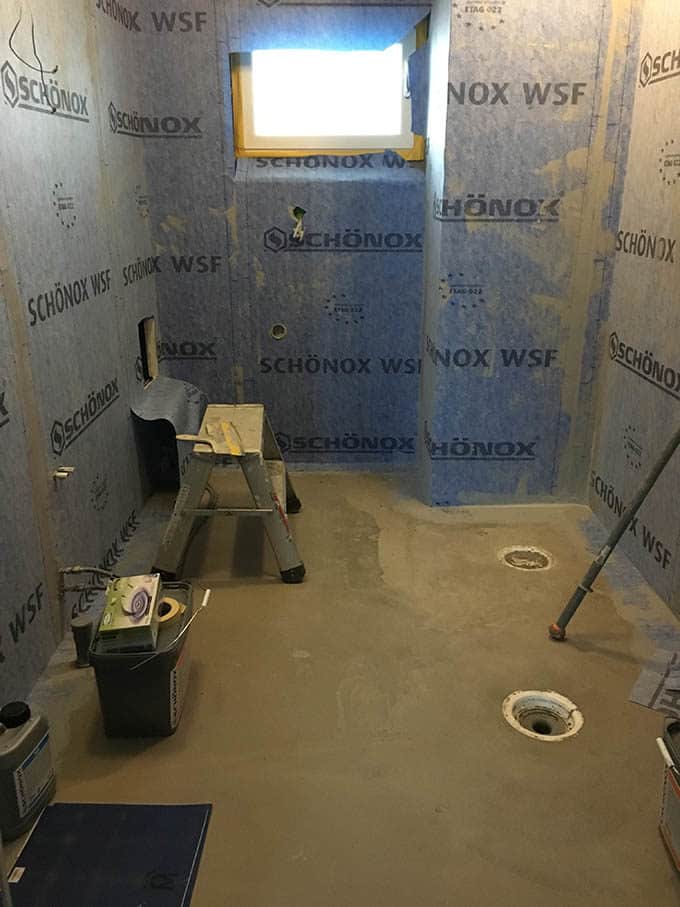 Our bathroom is starting to look like a bathroom. This week the electrical for the heated floor went in, and a lot of concrete got mixed up and poured in to fill and slope the floor. There is a film of concrete dust over most everything in our apartment now. The walls got primed and a mandatory moisture barrier installed, and then the tiling started. And by “started” I mean there are four tiles on the wall. Four!

And just because things can’t go too smoothly, there was a fairly major screw up with the tile. We ordered white rectangular tiles that were supposed to go up off-set in a brick style. I had the shipment sent to our contractor’s workshop so he could bring what he needed each day, rather than piling up all of the supplies in our small apartment. He sent me a photo of a tile and said, “30×60, is this correct?” and I took a quick look at the photo and said yep!

When the tile showed up at my home on Friday – the day that it was supposed to start going on the wall – I realized that it absolutely is NOT correct. I thought he meant 30x60mm (which actually doesn’t make any sense when I think about it) but it’s 30x60CM (12×24 inches for you imperial folk). In other words, the tiles are freaking massive.

I thought about it for one minute and then said, “just put the g-damn tiles up on the wall and get this freaking thing done or I will lose my freaking mind.” Or something along those lines but with a lot more foul language peppered in. Whatever. They’re big. They’re white. And they’re going up on the walls. I don’t care, just get it done.

I was really (REALLY) hoping that the bathroom would be done by this coming Friday, the 3rd of May, but I’ve been told that just isn’t going to happen. It’s more likely going to be Friday the 10th of May, assuming there are no other problems as we go. God willing, the end is in sight.

Of course, right when this is done a big plumbing upgrade is happening where the pipes are being relined in our entire building, and we just found out that’s going to mean 3-4 days of the drains being closed. So we’ll have running water, but won’t be able to shower or flush the toilet or anything. Looks like we might get a chance to use that bucket toilet after all!

Just one recipe this week, but it’s a good one: Massaged Kale Salad with Cranberries. 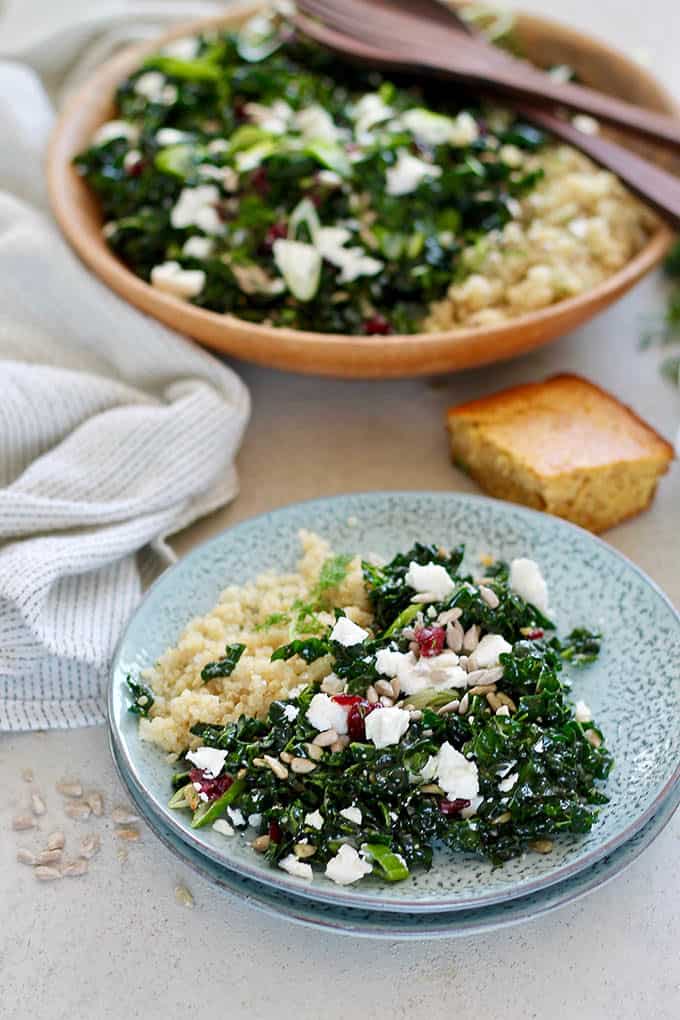 This easy Massaged Kale Salad with Cranberries is made with sweet Tuscan kale. A simple dressing is combined with toasted sunflower seeds, feta and quinoa, to create the perfect massaged kale salad for packed lunches or potlucks. {Pin for later}

2. Is Popcorn Healthy? Spoiler: sometimes yes and sometimes no. {Pin for later}

4. Vegetarian Freezer Meals For New Moms. Or for just anyone, really. {Pin for later}

5. Carrot Apple Ginger Smoothie. This one has some zing to it! {Pin for later}

1. This is troubling: Peanut allergy treatment may increase risk of anaphylaxis, study finds.

2. What’s the deal with flexitarianism?

3. Flint’s water crisis started 5 years ago. And it’s not over.

4. Ever wondered why coffee makes you poop? This is why.