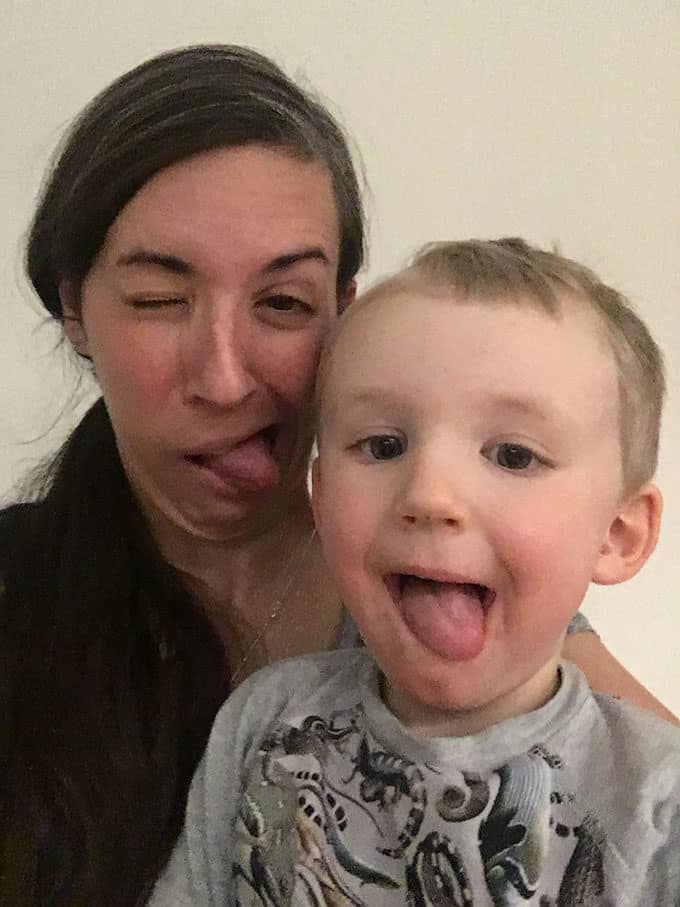 My big boy turned three last week and I can hardly believe it. It seems like only yesterday he was a tiny newborn curled up on my chest, with a deeply furrowed brow and a perpetually concerned look on his face. This boy made me a mamma, and although we are in the throes of full on threenager behaviour most days, I love the person he is becoming.

He's funny and kind and thoughtful, whip smart and wise beyond his years. He was an early talker, and has become increasingly eloquent, not just in how he speaks but in the connections he makes and the concepts he understands. He's fluent in both English and Swedish, and switches effortlessly between the two languages depending on who he is speaking to. He makes me want to be a better mother and a better person every single day.

For his third birthday, I made the Hot Fudge Sundae Cake from Smitten Kitchen. I made both ice creams from scratch, as well as the hot fudge sauce. I did not, however, make chocolate wafer cookies from scratch only to crush them up. I'm not that crazy.

Between making this cake and a few other batches of ice cream, I realized that I've got 26 egg whites stashed in my freezer. TWENTY SIX. Send help, please! Or just send me your favourite recipes for using up egg whites. I make an angel food cake from time to time, but I'm looking for other ideas. 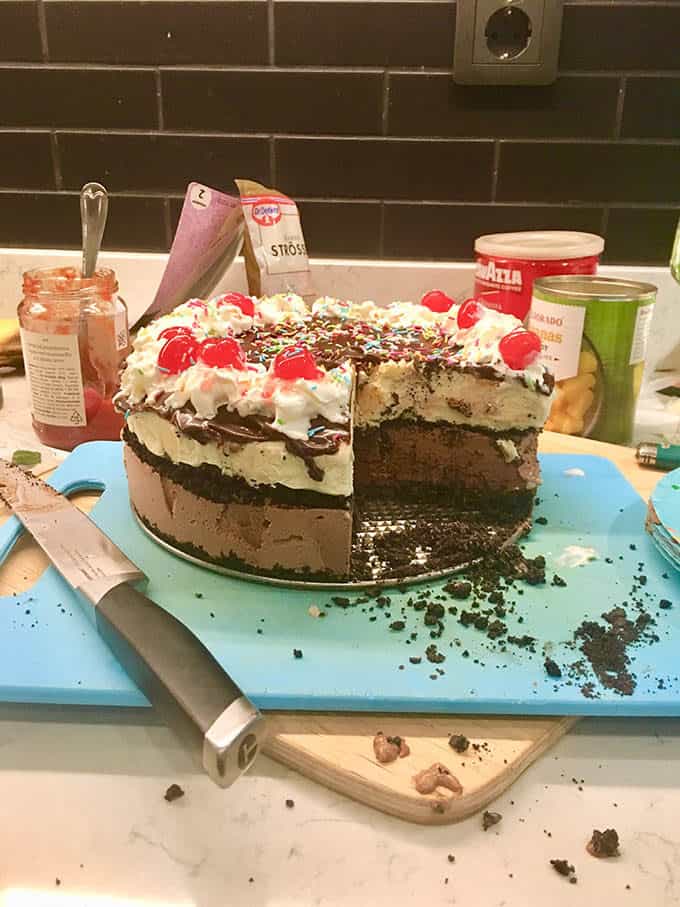 You may have noticed that this post didn't go out last Sunday, and nor did my newsletter. (You're subscribed, right?) No, it wasn't a technical glitch or anything like that...

We were having a perfectly pleasant day last Sunday, still deep in the flotsam and jetsam of Niko's third birthday party, and enjoying a mellower Sunday afternoon as his (god awful) gymnastics class was cancelled.

Niko said he was tired and asked me to swing him into bed. He lay down on the floor and I grabbed one leg and one arm and swung him back and forth three times, and I kid you not, as I was doing it I felt his tiny joints beneath my hands and thought to myself, "I sure hope this doesn't dislocate his elbow...."

On the fourth swing, just before I let go to fling him onto the bed, I felt two little pops. And then the screaming started ????????‍♀️

We knew what it was (it's happened once before, but last time it happened putting on a too-small jacket), so bundled Niko into the stroller and got a bunch of snacks ready. I gave Odin a quick feed and then headed off to Children's hospital with Niko, assuming we'd be home in a couple of hours (this was the case the last time his elbow dislocated).

We got there and actually got seen in triage fairly quickly, where they attempted to pop the ligament back in place, but without any luck. They gave him some pain meds and sent us into the waiting room, and after an hour or so another nurse came out and tried again. On her second attempt she thought she felt a pop, but Niko kept howling in pain and didn't start using his arm again. And you guys, his sucking finger is on that arm, so it's kind of a big deal.

So, we waited. And waited and waited and waited. Some four hours later we were seen by a nice doctor who said the arm was moving well, he didn't think anything terrible was happening, and we should go home to sleep but come back in the morning for an x-ray if he still hadn't started using the arm.

I finally got Niko home to bed after a good 7 hours at the hospital, and as he was exhausted he fell asleep right away.... but woke up in the middle of the night screaming bloody murder. And got up screaming in the morning. So right away I said eff this, we're going back for the x-rays. 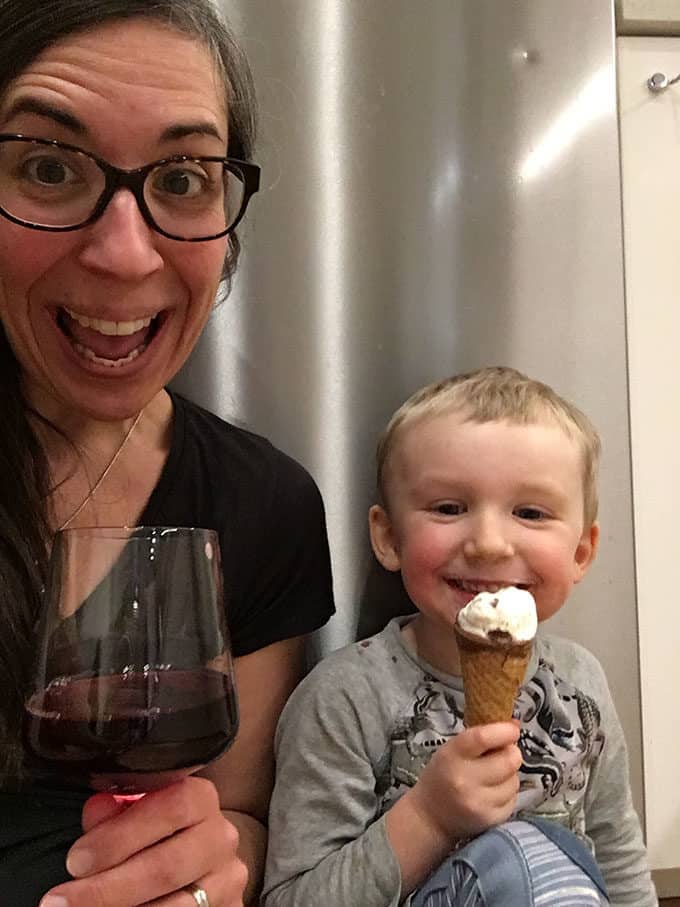 It was a loooooong week, but we all made it through mostly unscathed

Naturally, Paul had to leave for a week-long business trip that same morning, so I bundled up both kids and headed back to the hospital. We got in to have the x-rays fairly quickly, which were done with me wearing neck to toe lead and Niko sitting on my lap. He screamed when they adjusted his arm for the pics, but was otherwise a champ.

Then back to Children's Emerg, where we waited to see a doc for the results, and doubled up on pain meds. After about an hour in the waiting room, Niko asked for a snack from the vending machine (we'd eaten dinner from the vending machine the night before) and wanted to watch it drop down. So I put the money in, made the selection, and right as the nurse rounded the corner to come and get it, he went and opened the hatch to get his snack USING BOTH ARMS.

We went to our room and while we waited another few minutes for the doctor to arrive, I asked Niko if his sucking finger was working again and he promptly stuck his finger in his mouth and looked at me in amazement and said "It is!" And that is the exact moment the doctors walked into our room ????????‍♀️

They said that the x-rays did show a bit of fluid in the joint, and they suspected that there had been some swelling since it took about three hours to get the ligament popped back in place. I don't think he's sophisticated enough to have been faking the pain, especially since he didn't suck his finger for nearly 24 hours.

Anyways, all is well and we went home tired and relieved.

In other news, MY BUCKET TOILET HAS ARRIVED!!! 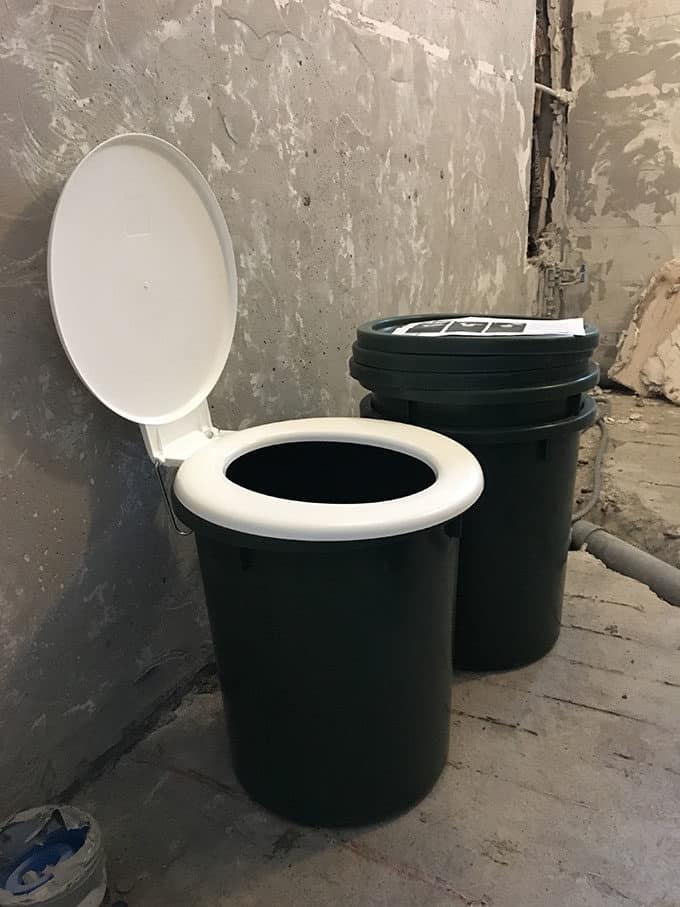 Yep, this is happening. We found out that the evacuation apartment our insurance had lined up for us was not only across town, but it was UNFURNISHED. So they expected us to move our beds, sofa, etc out of our apartment, live there for a couple of months, and then move everything back. Fuck. That.

So it made the decision to stay easy, and I found a company that rents out these nifty bucket toilets. It is a literal bucket with a toilet seat on top, and some pellets in the bottom which I can only assume is a sort of kitty litter for humans. You do your business, add another couple of scoops of pellets to control any odours, and move on with your day.

These guys come once a week and swap out your full bucket with a clean one. I think it's great! Paul, on the other hand, didn't understand that it was an actual bucket (BECAUSE HE NEVER LISTENS TO ME) and is somewhat horrified by the prospect. Whatever, I'm stoked. Let's just get this done. 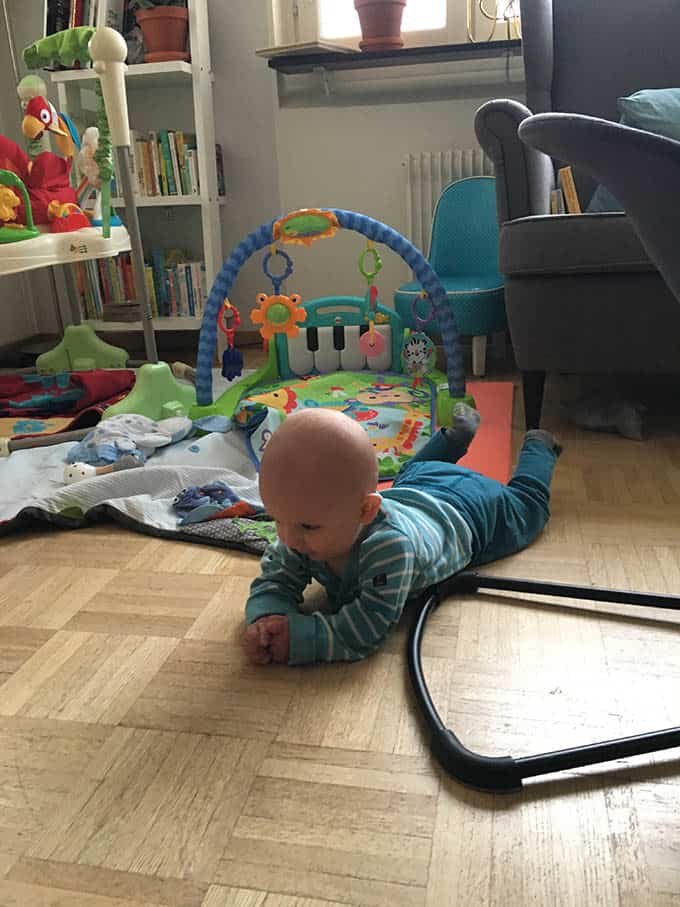 Definitely left this baby on his back kicking the piano keys when I left the room...

Because this week was a literal shit storm anyways, I decided it should also be the week I transitioned the boys into sleeping in the same room.

I needed to get Odin out of my room because he didn't sleep when I was in there. If I slept on the sofa he slept through the night, but if I moved back into my room he'd be up howling at me. Paul was sleeping on the tiny bed in our spare room / my office, I was sleeping on the sofa, and Odin had our big bedroom all to himself. Ridiculous.

Since Paul was out of town all week, I decided to rip the bandaid off and get it done. Solo parenting is exhausting, but sometimes it's easier to establish a routine when there's just one of you, ya know? Anyways, it's gone super well, other than the fact that Odin likes to wake up a lot earlier than Niko and has started waking him up in the morning.

Technically this is this week AND last week, but they were both slow weeks, so here you go!

A Mindful Eating Exercise: Whether you have a healthy relationship with food or are working towards one, we can all benefit from mindfulness. Here’s a simple mindful eating exercise I’ve been using lately that I hope you’ll find useful. {Pin this} 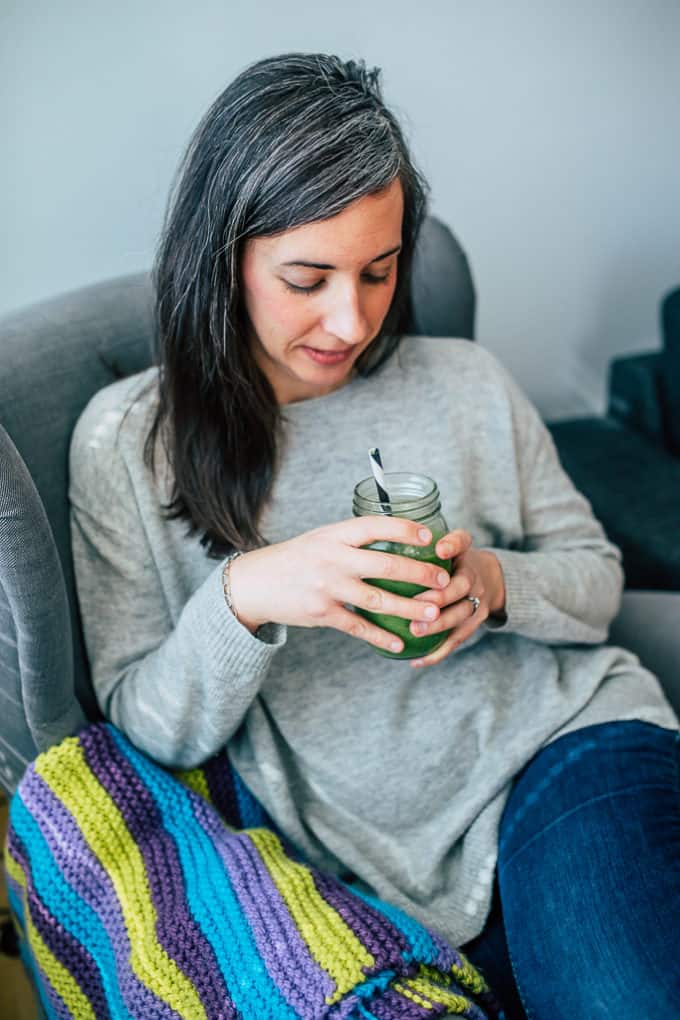 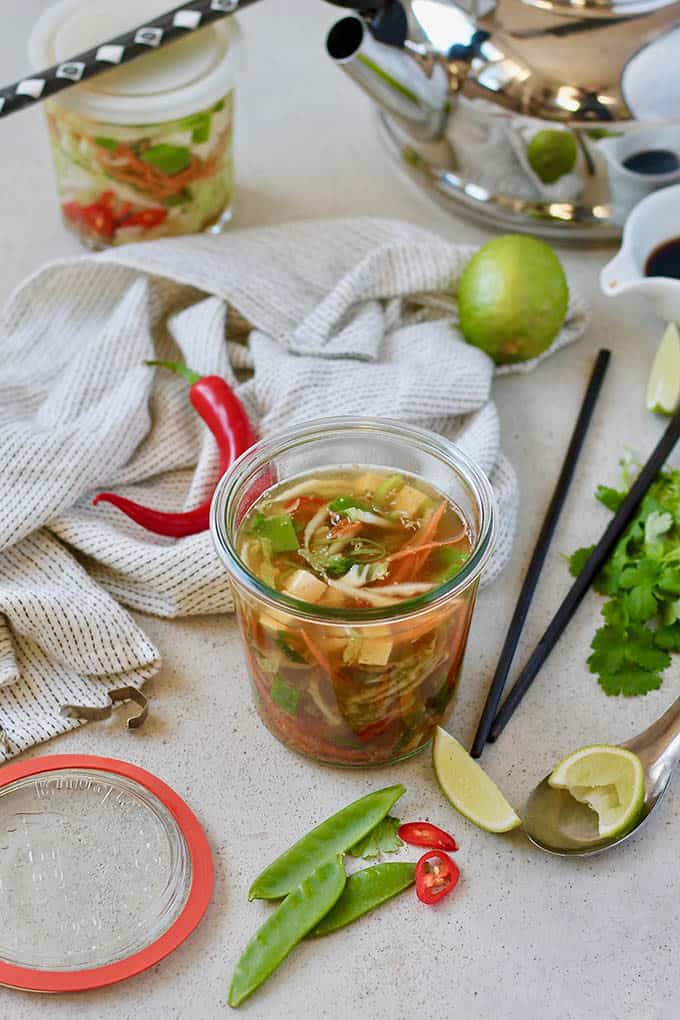 1. Black Bean and Quinoa Freezer Burritos. Thanks to a Reddit user named Thea this recipe went viral last week. Thanks Thea! {Pin this}

3. Curried Cauliflower Chickpea Wraps. I wish I had a batch of these in my freezer right now! {Pin this}

4. Is Popcorn Healthy? The people want answers! {Pin this}

5. Chia Fresca. Well this came out of nowhere! But if you're looking for a refreshing and hella hydrating beverage, this is the one! {Pin this}

3. Poop wars: Drug companies and doctors battle over the future of fecal transplants.

4. Yes, you fart in your sleep. Everyone does, and here's why.

5. Kvass, celtuce, and a few other "new" good for you foods.

« Miso Veggie Soup in a Jar
What's Good This Week »