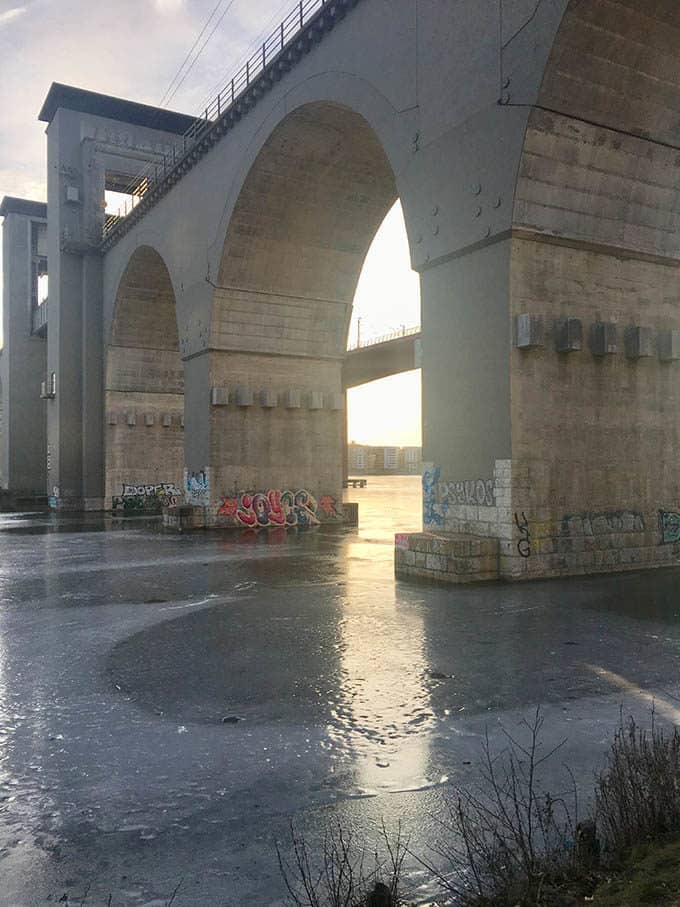 Over the last week I gave myself permission to get less stuff done.

I met up with one friend for lunch and a long walk, had another friend over for lunch, and met another still for coffee. I sorted through an enormous pile of clothes we’d been given by some friends with older kids, and lugged a big bag of stuff to the good will.

A new law came into effect at the beginning of February restricting daycare hours for kids who have a parent on parental leave, so Niko is home with me on Wednesdays now and I’ve completely given up on getting anything done on those days. Instead I pile both kids into our beast of a double stroller and we hit one museum or another. This week we went to Junibacken, which is a must-do if you’re ever in Stockholm with kids, or even if you’re just a kid at heart.

Paul and I have implemented a bi-weekly date night, and on Thursday we went out to scope out some bathroom fixtures. Because nothing says romance like comparing toilets in a big drafty warehouse. 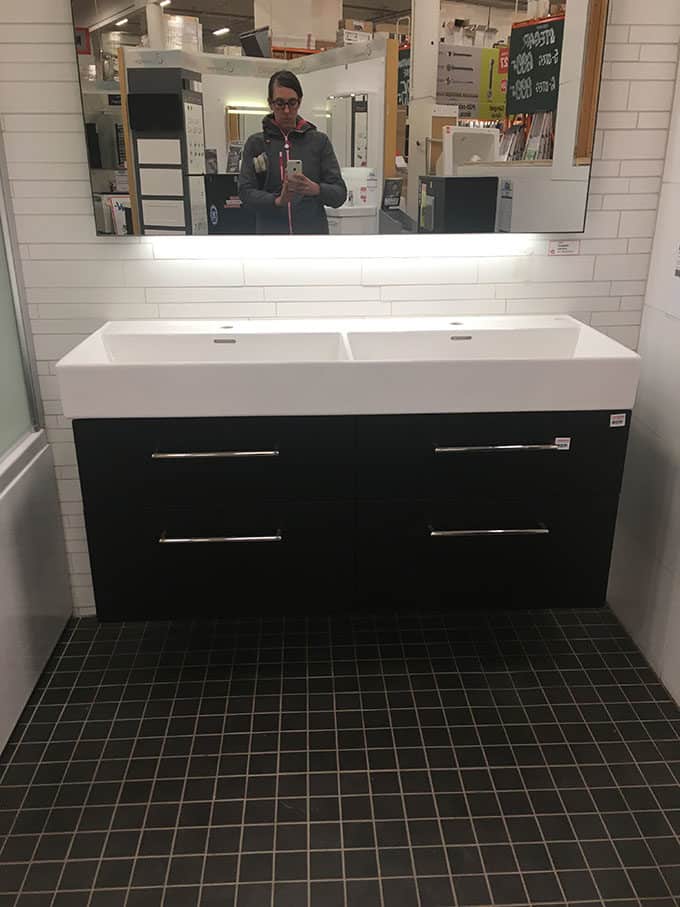 We’re going for a double sink in the new bathroom! And probably also that tile because we are lazy and are like, yep! Good enough!

And on Friday, I had a giant fucking meltdown.

Let me explain. You know we’ve been living without a bathroom since the beginning of December, right? And now we’ve been told that our other toilet also needs to come out? Well the fun continues. Our insurance rejected all of the apartments we came up with in our area, and went and found us one on the complete other side of town. Our daycare is a three minute walk out our back door, and this would mean instead a 45 minute door-to-door commute each way, twice a day.

So again I’m asking this all-important question: can’t I just poop in a bucket?

I mean, really, what’s worse? Uprooting my kids and moving to a strange apartment on the other side of town, that, yes, has a toilet and a shower in it, but then schlepping through rush hour traffic with two kids in a double stroller crammed into the subway to get my big one to and from daycare for two months.

Or, staying put, dealing with that obnoxious plastic wall that’s half-heartedly trying to keep the construction dust out of the rest of the apartment, and pooping in a bucket for a couple of months?

I am trying hard to sell Paul on the bucket. Am I crazy? 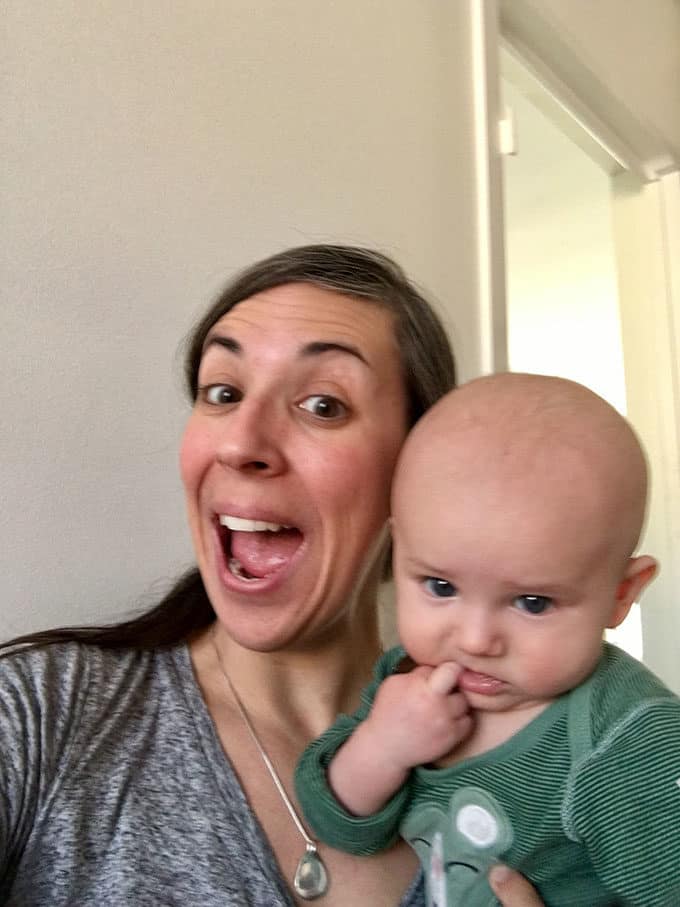 Odin gives zero fucks about me and my bucket-pooping drama. Zero!

So, on Friday, a million little things added up.

Odin short-changed me on the always-reliable morning nap, and then was being a total dick and refused to be entertained by anything for longer than one half of one minute. Accordingly, I wasn’t able to finish some things I really wanted to get done. I realized that I probably wasn’t going to hear back about an opportunity I was super excited about. Odin had his 3rd diaper blow-out in 2 days (I really truly considered sharing a picture here). My grocery delivery arrived with a broken jar of olives in it that ruined a bunch of other packages and caused the bags to break. An old man on the bus got all up in my business about being on my phone around my baby. And, I spent a good amount of energy disaster-thinking and getting all worked up about this apartment situation.

I put Odin in his bouncy seat and tried to explain to him that mommy has over 12 years of post-secondary education and many skills. He has zero education and zero skills, so why does he get to be the boss of me? What’s with that?

Then I yelled, cried on the floor, and attempted to recruit a friend for day drinking. I was not successful. Because, of course not. 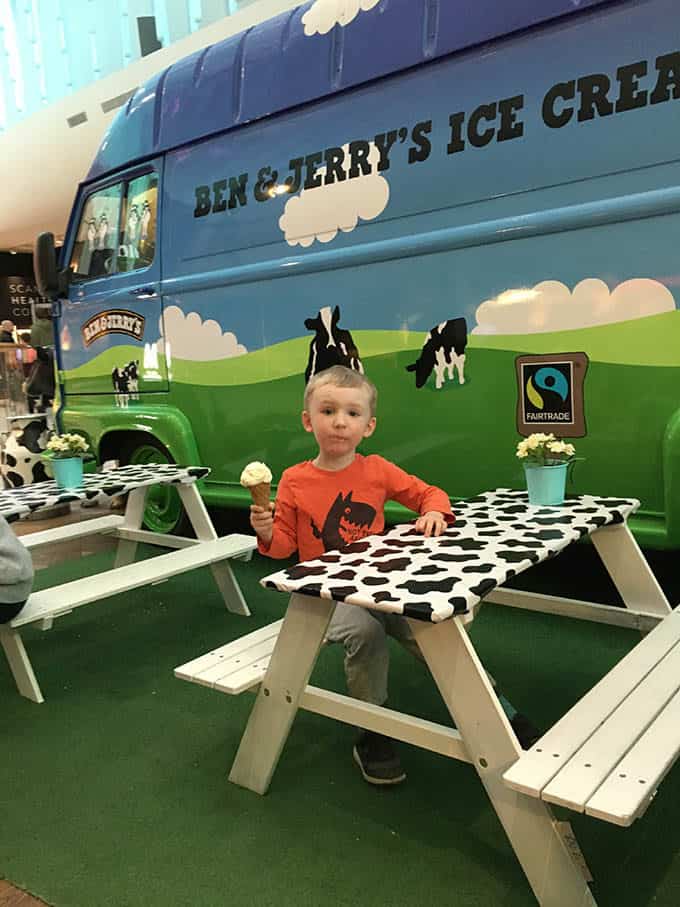 Why is ice cream cold, mom?

I’m trying – and often failing – to maintain some perspective about this whole apartment thing. We do have options. People are trying to help us. And it will be behind us at some point. I think frequently of a former colleague whose house burned down. We really are fine; it’s just been a lot.

Another quiet week. To be honest, I’m probably going to have to keep things scaled back for a while. Life, you know.

But! We made an easy and delicious Roasted Romanesco dish. 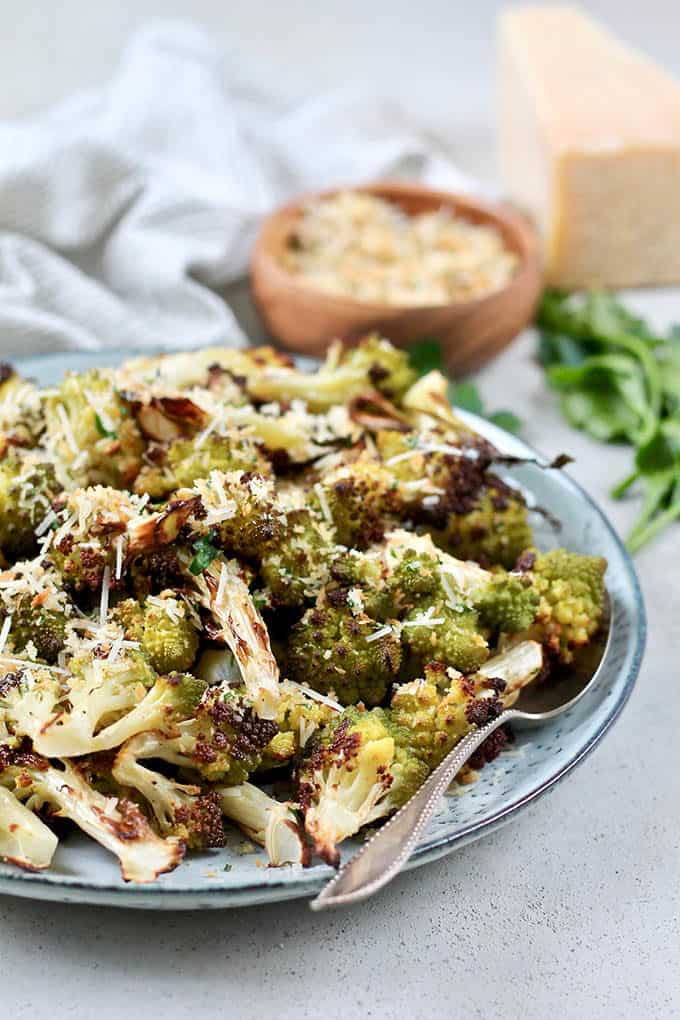 Roasted Romanesco Cauliflower with seasoned panko breadcrumbs is an easy veggie side dish recipe. This funky looking vegetable is kid-friendly, easily vegan, and is fast and easy to make.

1. A good article about the rise of intuitive eating –> The latest diet trend is not dieting.

2. Nut consumption may help with heart health in people with type 2 diabetes.

3. Apparently the tooth fairy is getting kinda stingy.