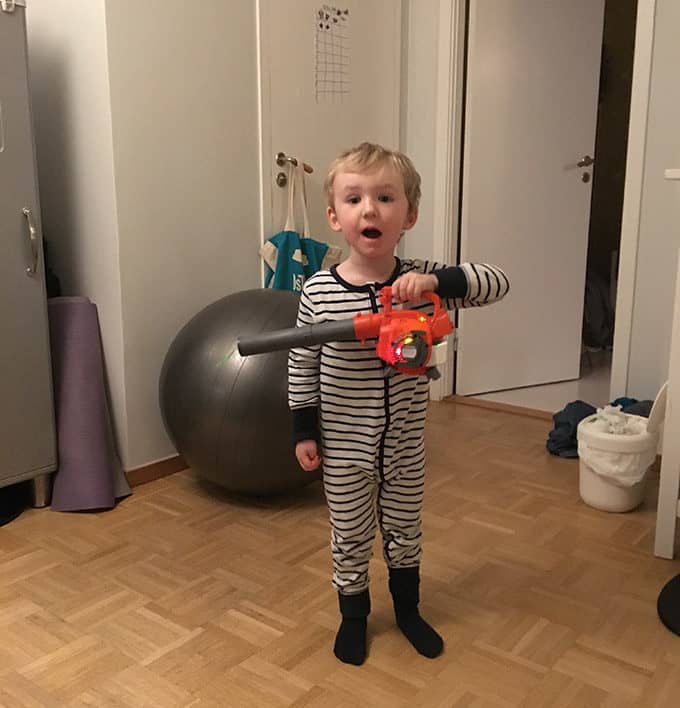 You guys, Santa brought a leaf blower and this guy is freaking stoked!!! So stoked that he refused to eat breakfast (which were homemade overnight cinnamon rolls with cream cheese frosting... I mean, come on!) because I said he couldn’t have his leaf blower at the table.

You know what else? That leaf blower is damn noisy and I’m gonna let those batteries run out and then never, ever allow for them to be replaced. I also made the mistake of buying Niko a toy truck that I did not know made totally loud and obnoxious noises and does not seem to have an off switch. Rookie mistake! 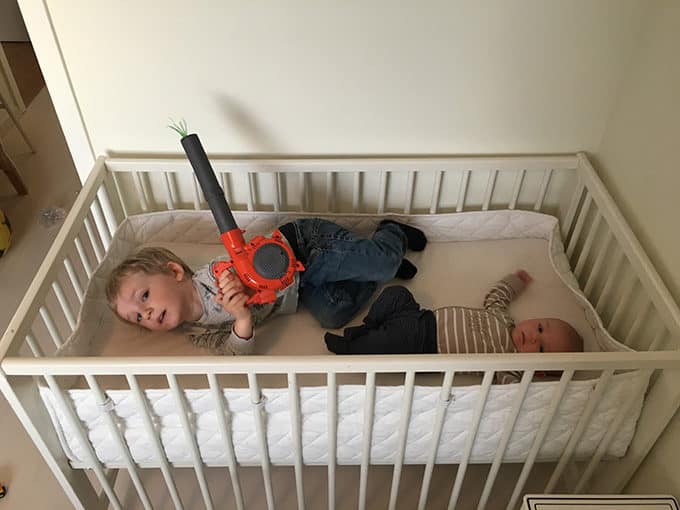 Speaking of rookie mistakes, I made sure to fill Niko’s stocking with all kinds of cool toys and treats. Then I filled Odin’s stocking with pacifiers (boy looooooves his pacifiers) and after Paul had fallen asleep I tip-toed into the living room and filled his stocking with treats. I assumed he’d do the same for me.

You know what they say about assuming making an ass out of U & me?

So Christmas morning Niko gets up and is bonkers excited pulling little toys and stuff out of his stocking. He then looks in Odin’s stocking and pulls out the packages of new pacifiers. And then goes over to Paul’s and pulls out the giant Toblerone and package of Nibs I’d stashed in there.

And then he goes over to mine, which is predictably empty. He looks up at us and says, “Santa didn’t bring anything for Mom!” and then Paul says, “Well I guess Mom must be on the naughty list!” ????????‍♀️

Next year I’m going to pull from our family budget and stuff the hell out of my own stocking. Paul’s getting a lump of coal. 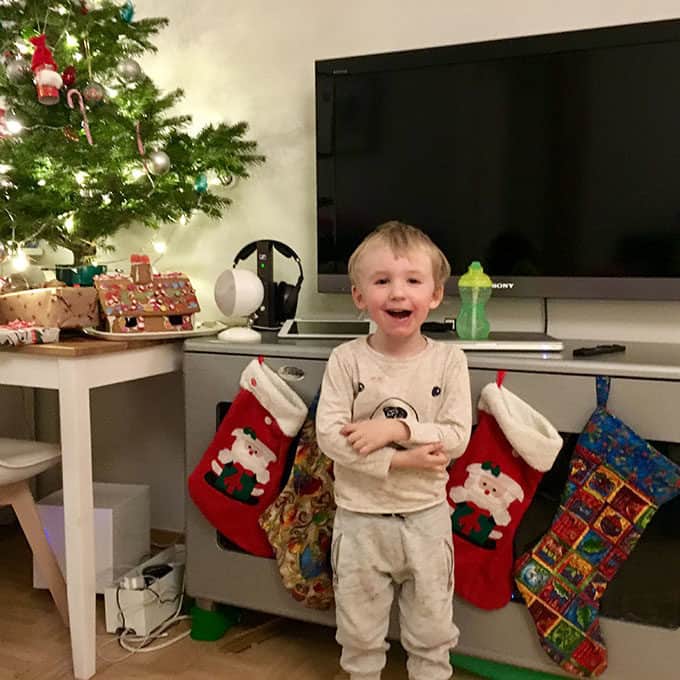 The stockings were hung by the TV with care…

Over the Christmas holidays Paul really really wanted a warm holiday (Swedish winters are hard) and I wasn’t ready to take Odin anywhere tropical just yet. I really really wanted to introduce Odin to the rest of his family and stay in a house that has things like bathrooms and showers and laundry. We couldn’t come to any agreement so we decided to divide and conquer.

The day after Christmas Paul and I each took one kid to opposite corners of the globe. I left bright and early on Boxing day and flew back to Vancouver with Odin, and Paul and Niko went on a tropical boy’s trip. It may seem a bit weird for a family to go separate ways just after Christmas, but honestly, I think everyone is getting exactly what they need.

Paul is getting some sun and sand, and Niko is getting a much-needed dose of one-on-one time and special attention. I’m getting a break from both of them, which will hopefully allow my patience to reset in a big way. 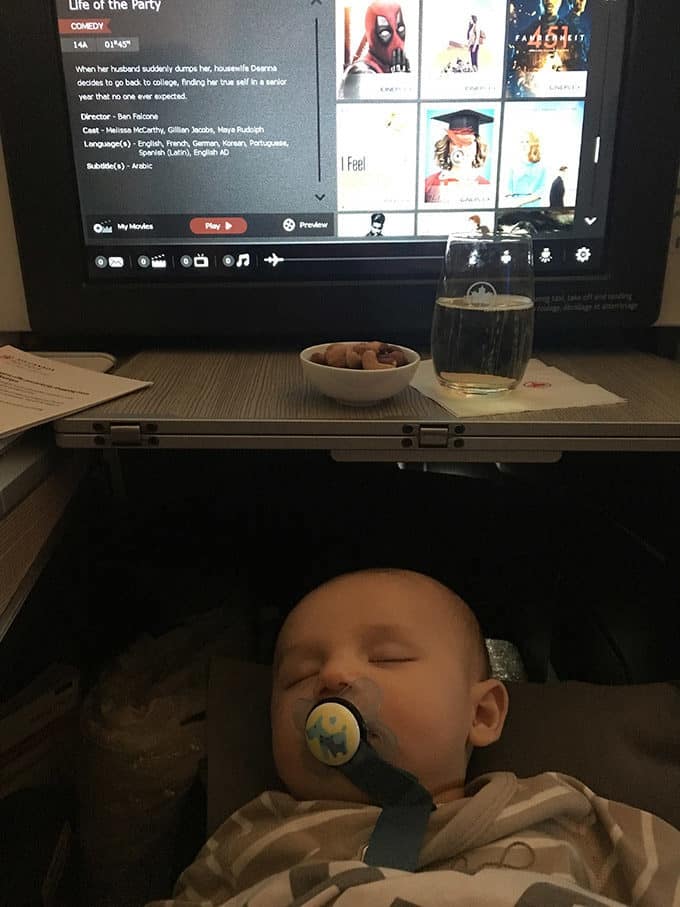 Odin and I scored a free upgrade to business class on our long flight, and after a really chaotic couple of months there was nothing better than sitting in that big roomy seat with a glass of champagne and all the movies I could watch.

In the end I didn’t watch any movies, but I did finish one of the books I’m reading so now I’m pretty sure I’ll make my 2018 book reading goal. Down to the wire! 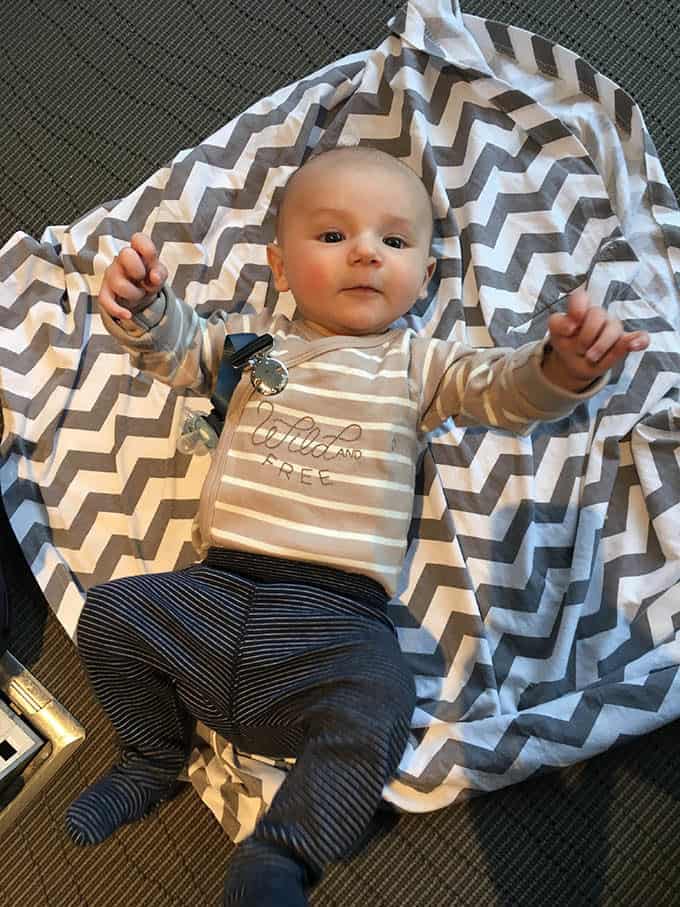 Stretching out in the lounge between flights

It was the most painful part of the entire trip – which took 29 hours from door to door – but I woke up on the coast (after approx 1.5 hours of non-consecutive sleep in a 48 hour period – thanks Odin!) had a shower in my parent’s outdoor shower, got to introduce Odin to his family, and it was worth every sleep-deprived moment. 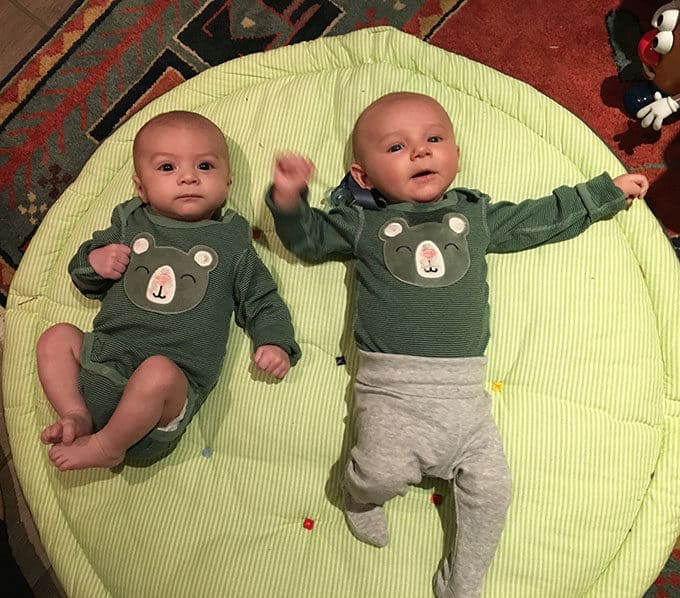 Odin and his cousin Jacob. These guys were born on the same day. Cousin twins!

You guys have heard me talk about my homegirl Sarah from Sustainable Cooks a lot in the last six months. Sarah and I “met” in a Facebook group for food bloggers (we’re dorks, yo!) where she was posting a lot. I realized from what she was saying that our situations were similar – we’d both been blogging for over 8 years, we’d both made a lot of mistakes we were trying to correct, we were both working through a daunting to-do list to fix 7-ish years of mistakes after doing SEO audits on our blogs, and we’re both momming two boys (two of whom are almost exactly the same age).

Sarah lives near Seattle, so when I told her that I was making the trip out west she said she was going to “aggressively insert herself into my plans” and that she did! She woke up at the crack of dawn and drove up north, caught a ferry to the coast, and came to stay with my family for a day. 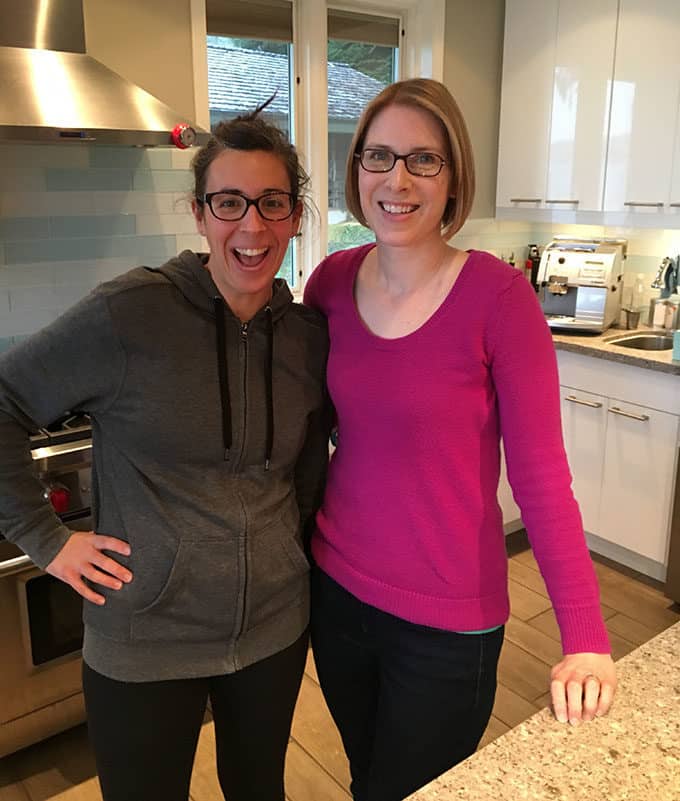 I brought Sarah a bunch of random stuff from Sweden, and she brought me some amazing homemade treats, the ingredients to make her infamous Nordy Bars (which I can’t find in Sweden) and a bunch of other really thoughtful stuff.

We settled in for a couple of days of hanging out, chatting, and being dorks about SEO. 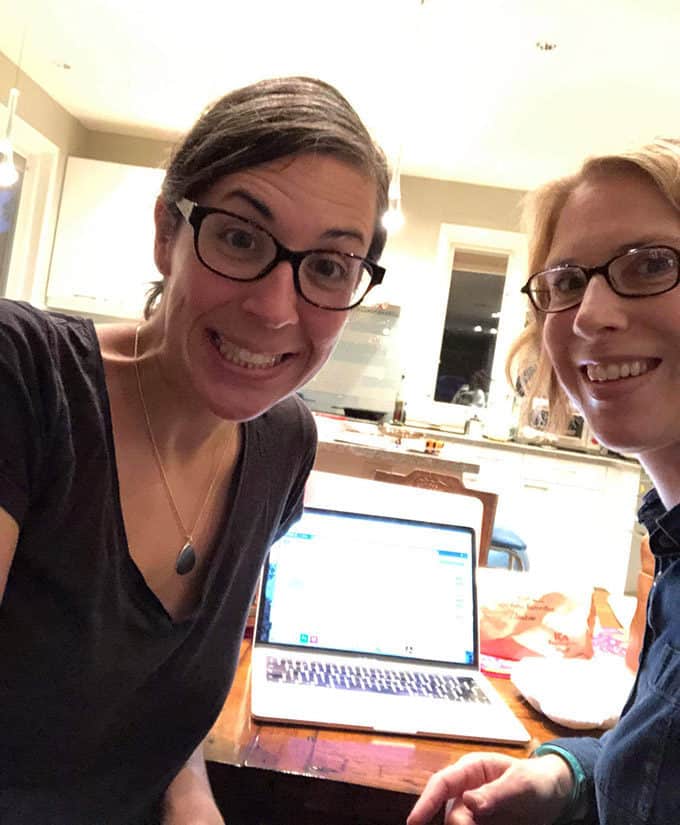 This one time, at blog camp…

And went for long, sleep-deprived walks on the beach. 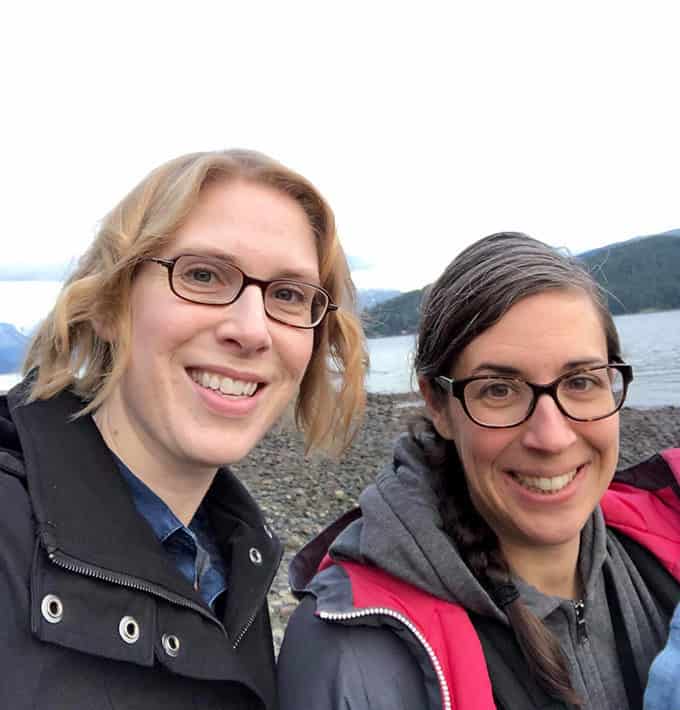 It’s amazing to live in a time where you can have a real and genuine connection with someone you’ve never met in real life, and even more amazing to finally be able to hang out in person!

Their premise is simple: you set aside one day or weekend per month, and bang out your meals for the entire month to be frozen and later thawed and enjoyed at your leisure. You know I’m a huge fan of freezer meals, and these folks take the guess work out for you.

Once A Month Meals has had a waiting list for new members, but a little bird told me they’ll be opening up registration in the next couple of days, so now’s a great time to get involved. Or, if you know of someone who you think this would be perfect for (busy moms, I’m looking at you!) you could be an awesome friend and pick up a gift card for them.

It was a pretty quiet week here on HNL with the holidays and a bunch of travel. I re-published an old story about my tradition of fruitcake making with a longtime friend, updated to reflect this year’s limited edition batch of fruitcake we made together in Stockholm. 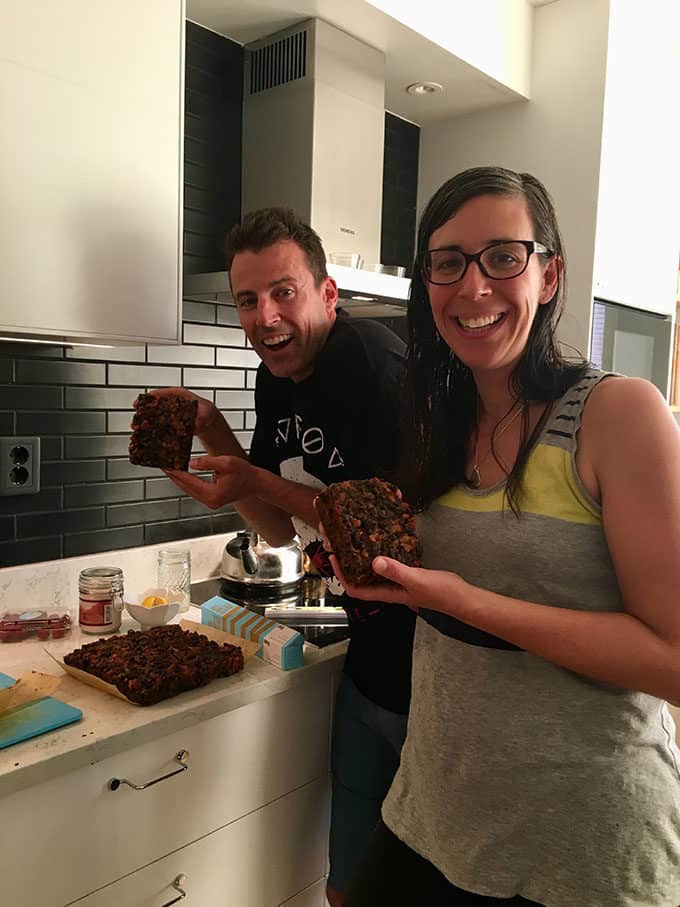 I’ve been re-testing a bunch of old recipes in the Instant Pot lately, and am stoked about how well this Instant Pot Carrot Soup turned out! It’s super creamy and satisfying, and topped with garlicky greens for extra veg. {Pin This Recipe} 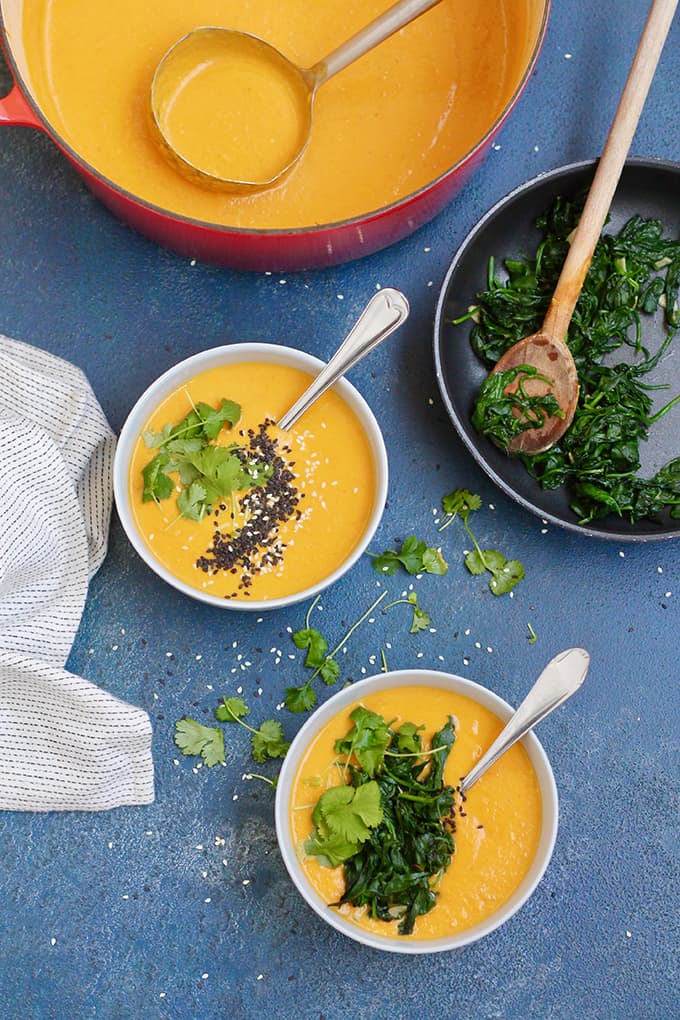 1. Mung Bean and Coconut Curry. It’s been a gold star year for this recipe. Make it in your new Instant Pot! {Pin This Recipe}

2. Amazing Vegan Gravy. Hope you all enjoyed your vegan gravy this holiday season! {Pin This Recipe}

4. Curried Cauliflower Chickpea Wraps. I have just one more of these in the freezer. Time for a new batch! {Pin This Recipe}

5. Black Bean and Quinoa Freezer Burritos. A long time favourite – if you haven’t tried it yet, now’s the time! {Pin This Recipe}

What’s Good Around the Web

1. Will Mushrooms be Magic For Threatened Bees?

4. Harvard School of Public Health is reviewing six popular diets, and the science behind them.

5. Don’t diagnose your own food allergy or sensitivity. Do this instead.