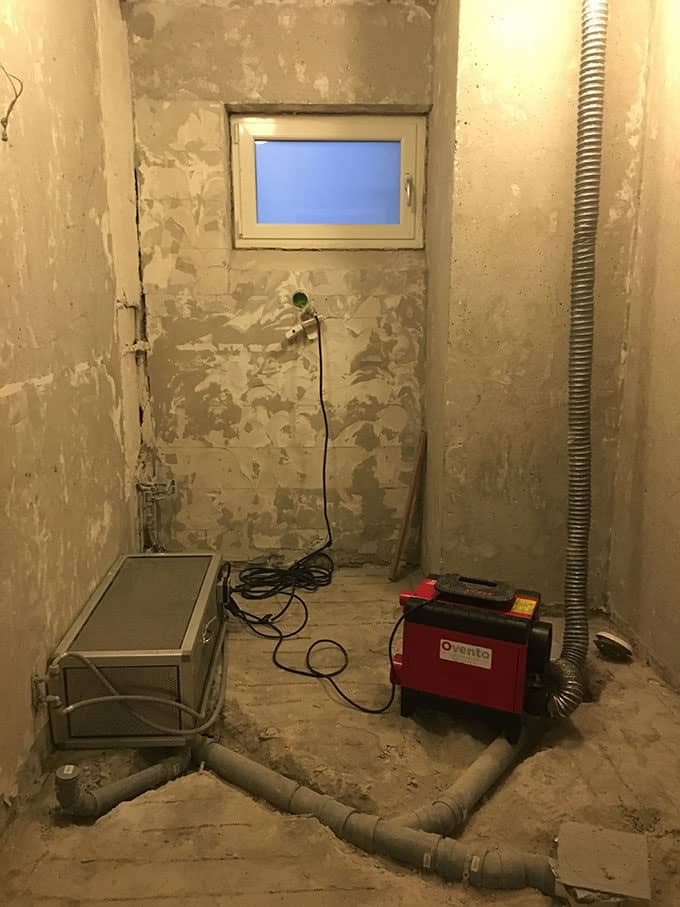 So, this is my bathroom.

Charming, isn't it? That red thing is a dehumidifier fan thingy that's running 24 hours a day, and no, it's not all that quiet. The big metal box is a heater that's trying to dry out that wet concrete before any repairs can be made. They'll come back and check on it sometime in January and determine whether the work can start or whether the fan keeps running. 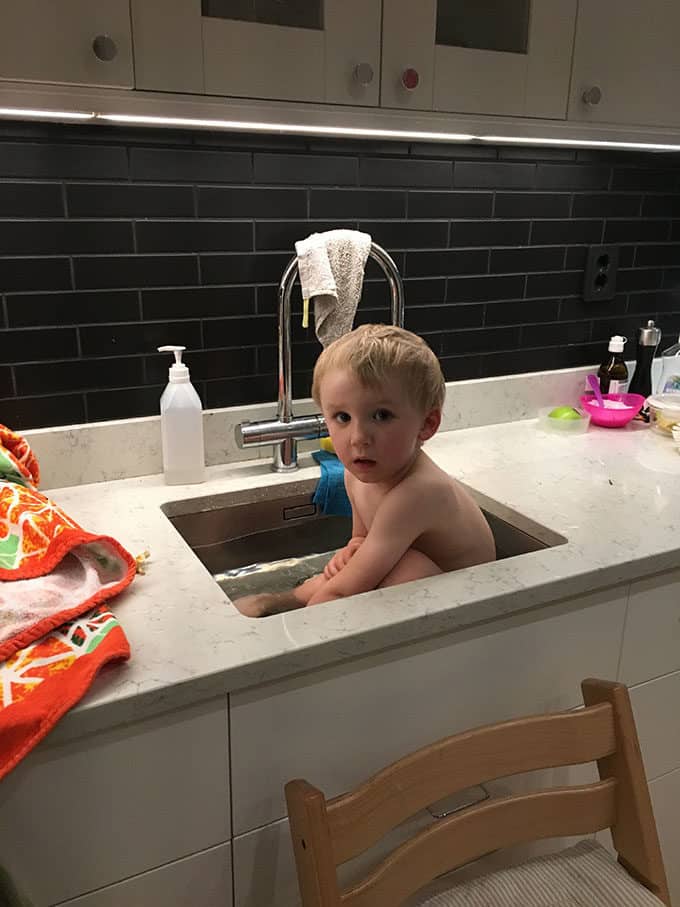 The kids are having baths in the kitchen sink, and there is a 24 hour gym across the street where the rest of us (that is, Paul and I) are having showers. Odin is oblivious, and Niko is not really a fan of the sink bath but is tolerating them for now.

My mom asked how showering at the gym was going, and, honestly? It's great. I go across the street for a shower and no one can bug me there. No one is coming in to ask me what I'm doing / whether I'm done / why water is wet / etc. I've gotten into a routine of going over for an hour, riding a stationary bike while reading a book and then having my shower. So that's fine.

The gym though? So weird. I haven't really been a gym goer since sometime in the 90's when I'd go with my highschool frenemy and ride the stair climber for an hour or so in a fruitless quest for tiny thighs. Oh 17 year old Katie. So silly.

I'm much more a walking outside or yoga class or swimming kind of a workout person, and I have a hard time understanding why you'd want to get your exercise in a stinky, sweaty box, but to each their own. I'm thankful for the quiet showers in any case. 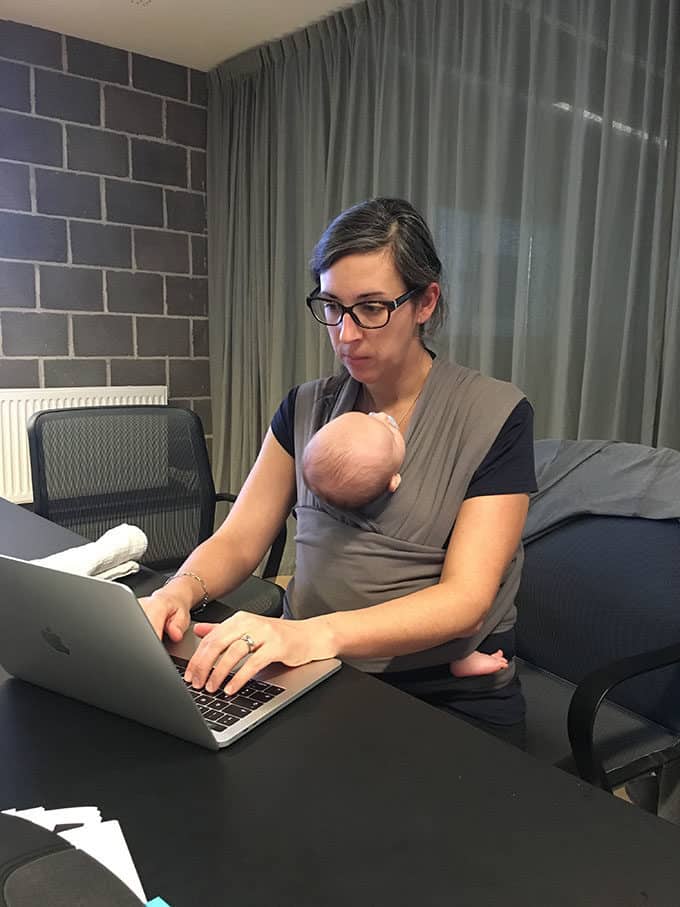 I just wrapped up a big contract that I took on primarily because I'm an insane person, but also because it was too cool to turn down. Poor Odie spent a lot of time at my old office strapped to my body while I worked, and my former colleagues are now v. familiar with my boobs.

Don't worry - his head support is better than it looks in that pic! He was wide awake and looking up at some lights there.

It was a fun project and an exhausting thing to do with a tiny baby and a perpetually sick toddler. I'm glad I did it and I'm equally glad it's behind me. Right when it was wrapping up, I got hit up to do another job - on a recurring basis - and after a few days of thinking I realized I really didn't want to do it.

I knew it wasn't something that would fill me up, and I wanted to have energy to take on things that would. Eventually I turned it down, and then promptly freaked out about it. It was SO HARD and anxiety provoking to say no. Why is it so hard to say no to things?! Why??? 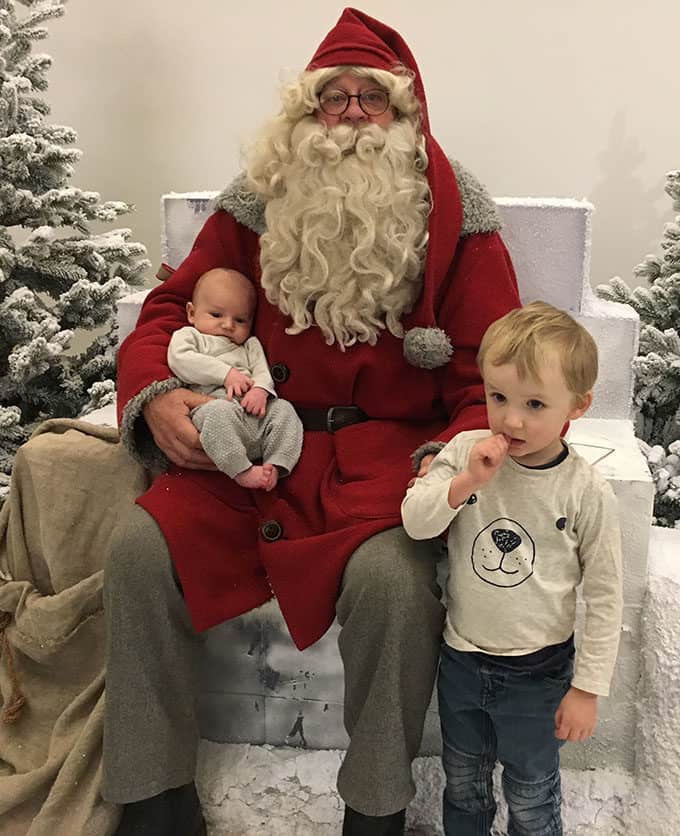 Given how skeptical he is about new people, I didn't think that Niko would get anywhere near Santa, and I assured him that he didn't have to sit on his knee, that he could just stand near him if he wanted to. We were waiting for some friends to arrive and there was a spot where kids could sit at a table at write out their list, so I told Niko to sit there.

He was there "writing" what he wanted (which, by the way, is a leaf blower. Super practical in our apartment) and I was trying to get Odin changed into cuter pants, and then when I turned around he was gone. Cue a couple of minutes of frantically looking for him in a busy shopping center when I spotted him:

He'd seen Santa and marched right up to him to hand his list over, budging to the front of the line like he and Santa were on a first name basis! I did the only reasonable thing - threw Odin into Santa's arms, took a few photos, and then we got the heck out of there. 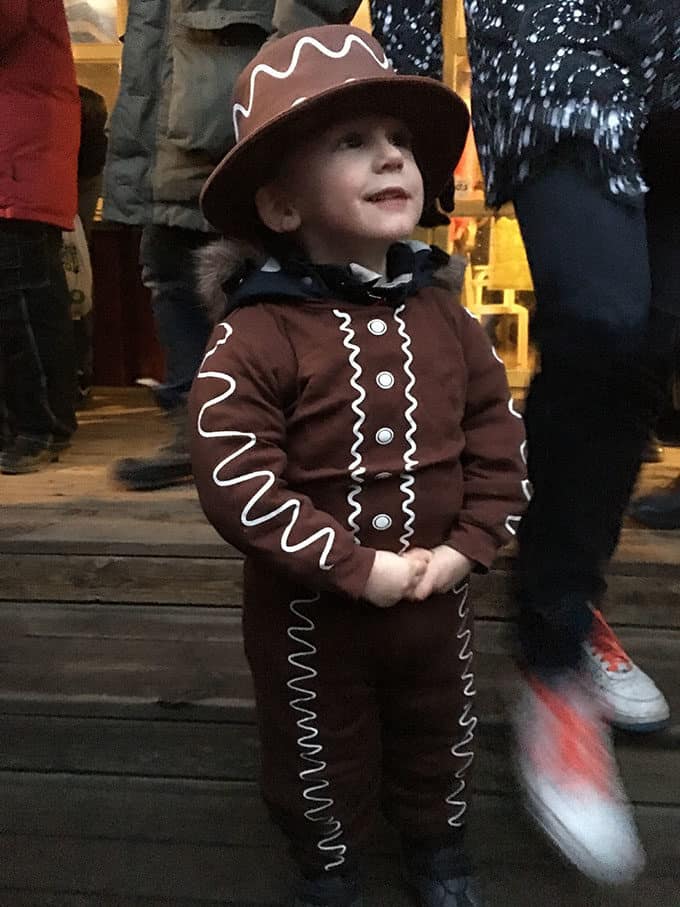 In Sweden the kids dress up as gingerbread people on Lucia day. Or in little Santa costumes, or as Lucia. It's super cute. Niko's preschool had a Lucia concert which lasted approximately three minutes, but he did a great job sitting in his place for the entire thing. The concert is outside, so they stuff the kids into their Lucia clothes over their snow suits.

We're not allowed to take photos or video during the concert due to privacy concerns, so this is the only one I've got. A few minutes after this photo was taken he had a category five meltdown in front of the entire school because he wanted two cookies. Please note he had four cookies in his hand at the time of the meltdown.

These are posts from the last two weeks, since I missed this Sunday post last week due to the project I was working on. Please note that I cooked and photographed these recipes while wearing Odin in the Moby Wrap.

First up these Miso Maple Roasted Brussels Sprouts. So tasty! So festive! Pin this recipe. 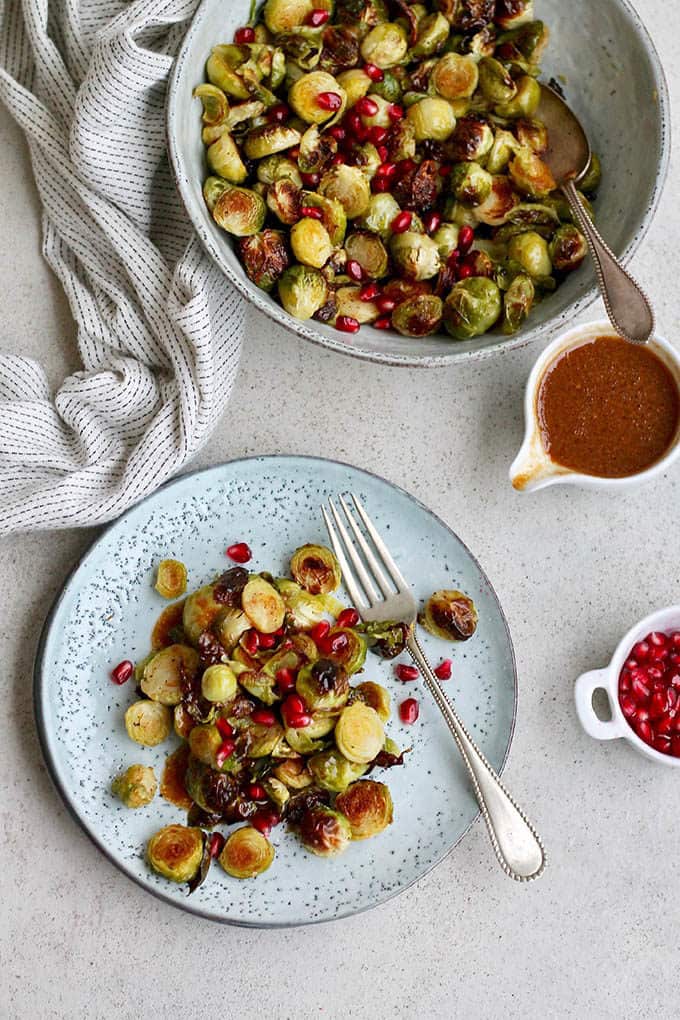 Then we made this super tasty Coconut Banana Granola recipe. It's a great way to use up brown bananas, naturally sweetened, and totally vegan. Plus tasty AF and your house will smell amazing when you make it. Pin this recipe. 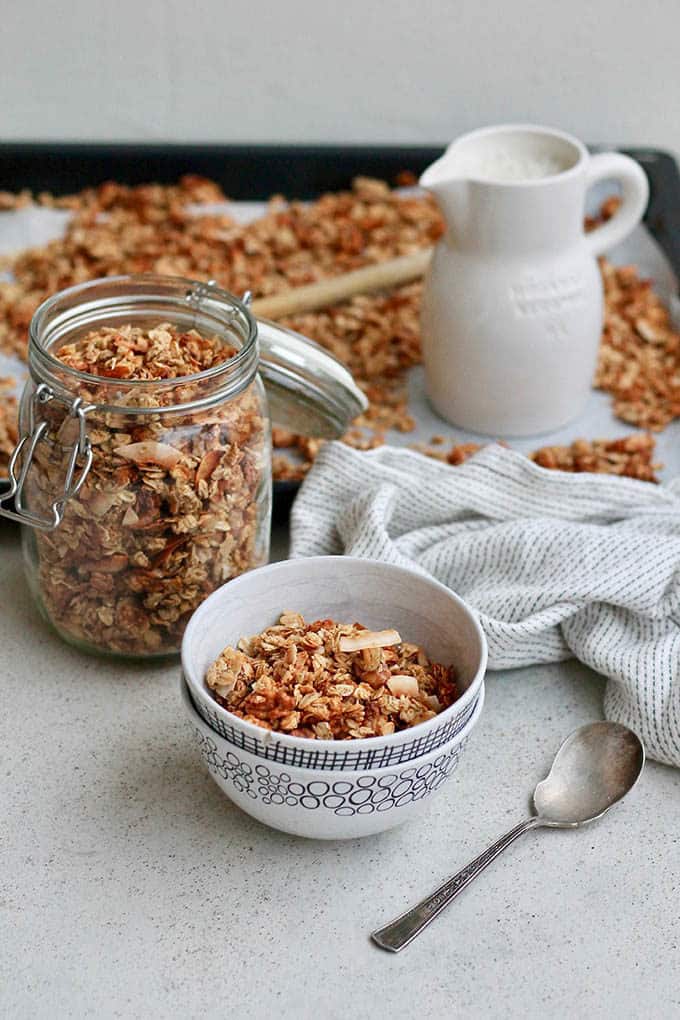 Need more convincing? This is what Emelie has to say:

"This has become my go-to granola recipe – so easy and sooooo good! My seven-year old loves it, and it’s at the point where she pretty much refuses to eat any other store bought cereal. I usually skip the walnuts (small sacrifice to keep the kid interested) but add dried blueberries instead, which are delicious together with the coconut and banana flavours."

Last but not least, I'm assuming that many of you, like me, are not done with your holiday gift list. Oh, you are? Good for you. Me, not so much. But if you need ideas, I've got good news for you! I rounded up 14 Awesome Edible Gifts that you've still totally got time to make. Pin this for later. 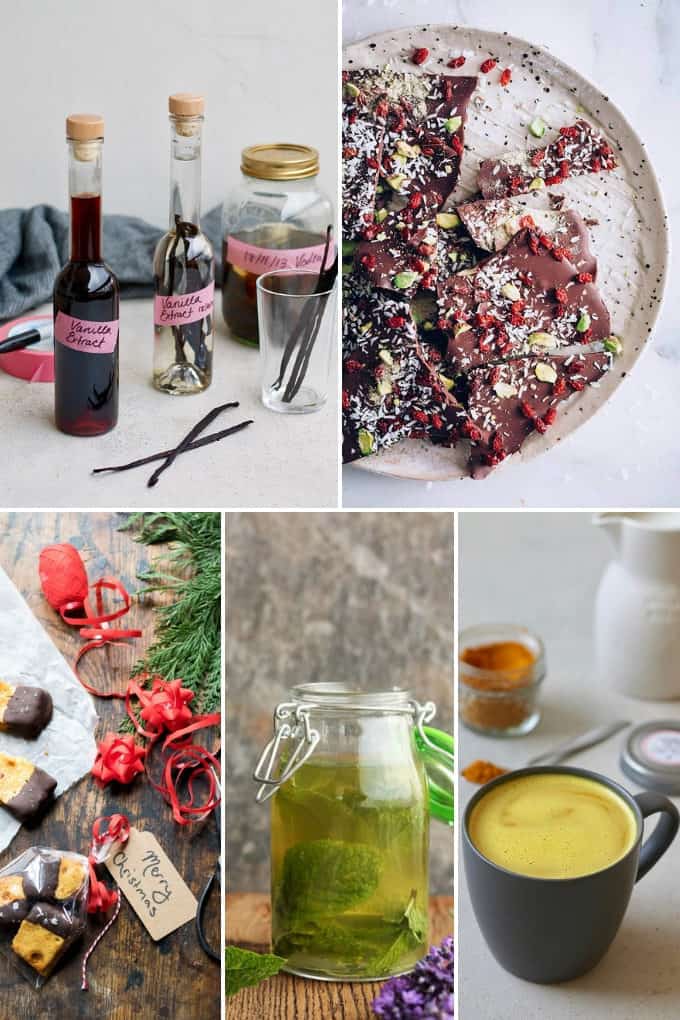 1. One of the biggest problems with nutrition research is food industry funding and conflict of interest. It's about time for a change. After halting a discredited alcohol study, officials will enforce new policies to ensure that private support does not compromise scientific integrity.

2. What we know about diet and weight loss. After decades of research, not all that much.

3. And also: Why we need to stop conflating weight with self-worth.

4. More good evidence in support of the Mediterranean diet.

5. From the Harvard School of Public Health: 17 Gift Ideas to Give the Gift of Health.