Well, this is the week that shit got real. And I do mean literally.

The big one got sent home from daycare with diarrhea on Wednesday afternoon, and we've been elbow deep in poop ever since. I know, I know, you totally come to a food blog to read about my kid's diarrhea. I'm sorry.

But seriously, between him letting out a blood curdling scream every time he has even a tiny shart and the small one who fills a diaper with every feed, I am sleep deprived, my hands are raw and bleeding from all the washing, and our laundry machine is being seriously put through its paces. And of course both kids just want alllllll the momma snuggles.

Plus I can't even with the toddler whining. I know he's hurting so I'm trying So. Hard. to be patient and understanding, but where to they even learn that tone of voice in the first place? And more importantly, how do you coach it out of them? I'm going to lose my freaking mind!

That smile up there? Fake. So freaking fake.

We took Nikes in to urgent care yesterday after 4 days of poomageddon, where they did some tests and said it's just one of those things we've got to ride out. Ughhhhhhhh. He was clearly dehydrated, so we've had to start him on pediatric electrolytes, which requires hostage-takedown levels of negotiations to get him to take even the tiniest sip. We've tried bribery, we've tried explaining in graphic detail about what IV rehydration will entail, and we've tried straight up threatening. Any tips?

We're also doing the aptly named BRAT diet and probiotics, but nothing seems to be slowing the onslaught of nasty, butt-burning toddler poop. Send wine pls. Or a night nanny who loves changing diapers. Either way.

Yes, the baby is still on the table. Gimme a break. See: poomageddon.

I got a lot of lovely comments, emails, and DM's about Odin's birth story. Thanks, you guys! So many of you love the name as much as I do. Yay! And I also loved hearing from people who also had a drug-free birth only to feel ripped off by their own suffering.

One cool thing I forgot to tell you is that Odin got two new cousins, one of whom he shares a birthday with! His cousin Jacob in Vancouver was born 25 hours after him, but with the time difference they technically have the same birthday. My brother pointed out that since Odin was born only 40 minutes into the 18th they had a big window for their baby to arrive second but be born on the 17th. Glad that didn't happen!

And little Ellen was born in London on the 30th after being evicted from my sister's uterus, which is apparently very, very cozy.

These babies were due Oct 15, 20, and 21 (no, we didn't plan this) and ended up arriving the 18th, 30th, and 18th respectively. My mom is about to start bopping around the world to visit all her new grand babies!

We had a pretty quiet week on HNL due to one newborn wanting constant snugs and me admitting defeat and snuggling up to read a book with him on my chest (turns out that makes me a lot less stir crazy than watching Netflix all day) and one two-year-old with projectile diarrhea.

I shared this Healthy Pumpkin Granola, which is a reprint from last year, and a recipe very worthy of your time. It's made with real pumpkin, fall spices, crunchy millet, and golden raisins. Pin this recipe. 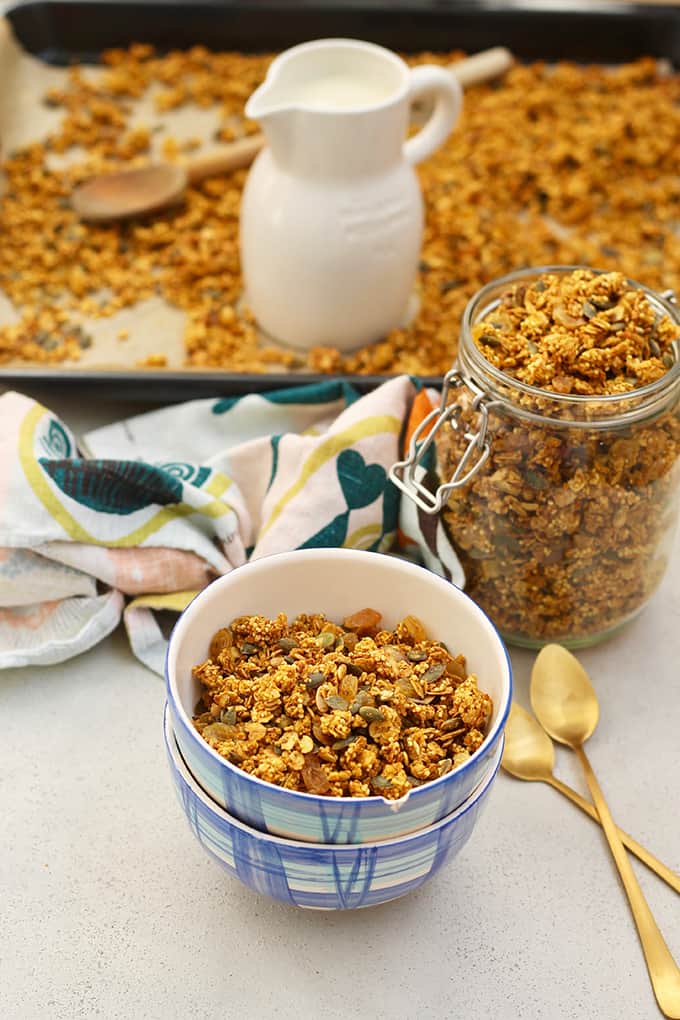 I also shared Odin's birth story, and story behind (more like the saga of) his name.

1. Homemade Pumpkin Purée. Yassss! So glad you guys are cooking up your pumpkins. Pin this recipe.

2. Amazing Vegan Gravy. Like the name says, this gravy is bonkers good! Pin this recipe.

3. Tempeh Bolognese. This recipe is cozy and delicious! Pin this recipe.

4. Chocolate Black Bean Brownie Smoothie. Beans in a smoothie?! Don't knock it till you've tried it! Pin this recipe.

5. Turmeric Latte Mix. This is a great homemade gift!

1. Love this CBC article about the invalidity of food sensitivity testing.

2. Is a vaccine that would allow celiacs to eat gluten again on the horizon?

3. How the language of dieting was changed by silicon valley.