I hope you're all doing well as we descend into the madness of December.

I haven't *quite* met my goal of having all of my Christmas shopping done before the first of December, but almost. I haven't started any Christmas baking yet, don't have a tree, and haven't put up any decorations other than the little elf door that the kids set up and the Swedish Christmas stars in the windows.

I don't know, it feels impossible that Christmas is just three weeks away. Didn't we literally just come back from summer vacation? Don't I still have a million and one things on my to-do list? Is it just me? 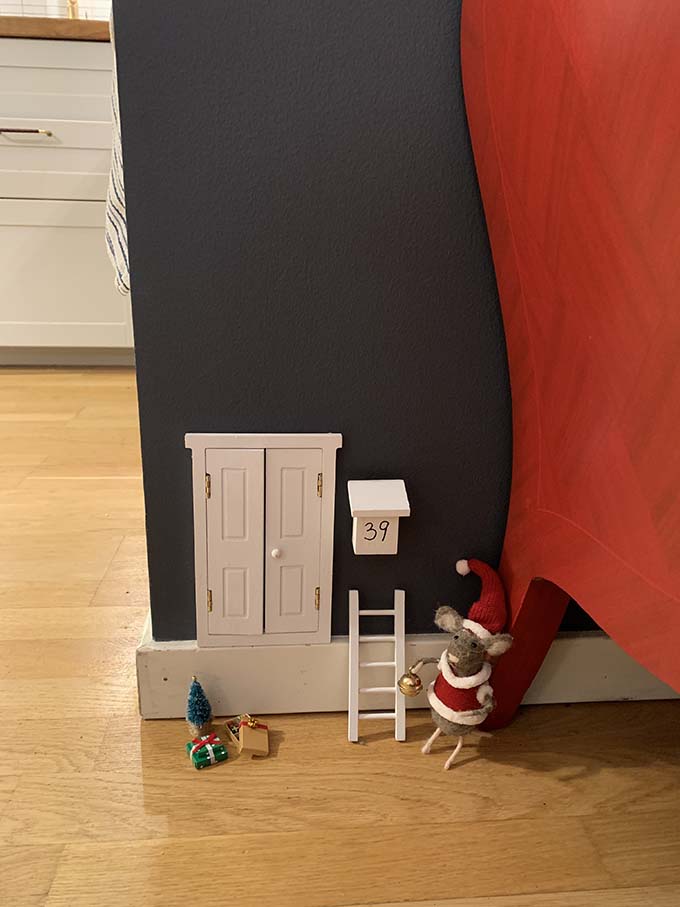 Our Nissedörr is back in business

Last week was quiet around here due to a super busy life and work week. My company went away for a conference, which meant that the work week was super short, but it was also really fun.

Our conference venue was a newly renovated hotel in the archipelagos, and we went there by boat. This boat:

I'm part of the management team and therefore knew all of the plans in advance, and when our CEO suggested this RIB boat adventure IN NOVEMBER IN SWEDEN I thought she was totally insane. But it ended up being so much fun!

I had many layers on under that survival suit, including wool thermal layers, a thick jacket, and wool-lined rubber boots, and I was toasty warm everywhere except for my face. 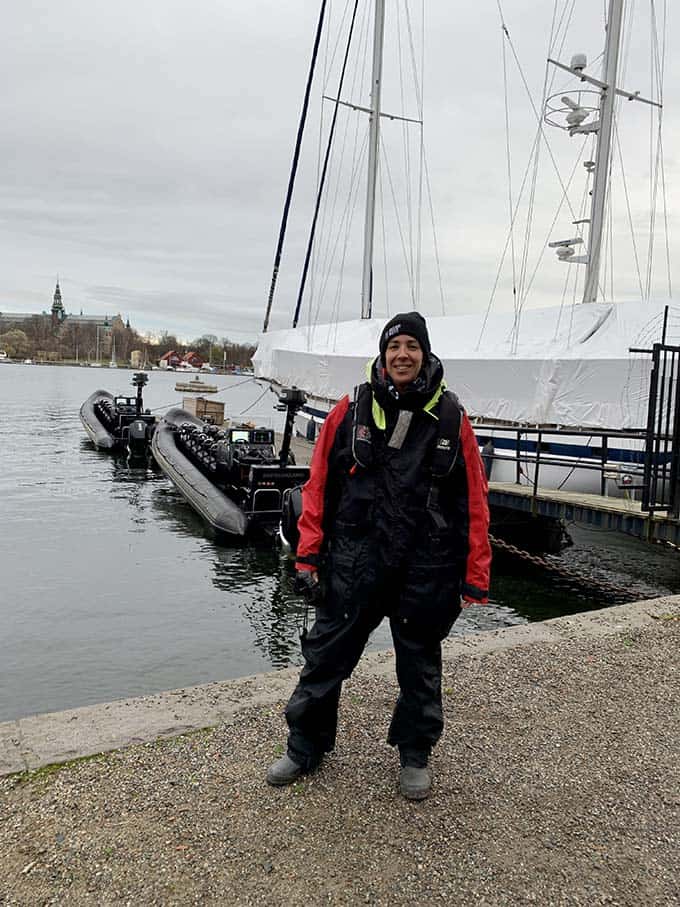 The boat ride ended up being a team building / challenge kind of thing. There were four boats, and we had to point to a location on a map and then solve a bunch of trivia questions in order to get the boat moving. Then it was a high-speed chase, looping around in circles and going over big waves while we all held on for dear life and screamed our faces off.

We stopped at one island in the archipelagos for lunch and another team building activity, and then were back in the boats for more high-speed action to get us to the conference. Once we got there we had a couple of hours of presentations, and then free time which the majority of us spent in the spa.

I'd say half of the company was jammed into this little outdoor pool, keeping our shoulders under water and sipping cava in the cold air. It was brilliant. After working remotely / dispersed for nearly two years, this was such a fun way to come back together and get to know each other again. 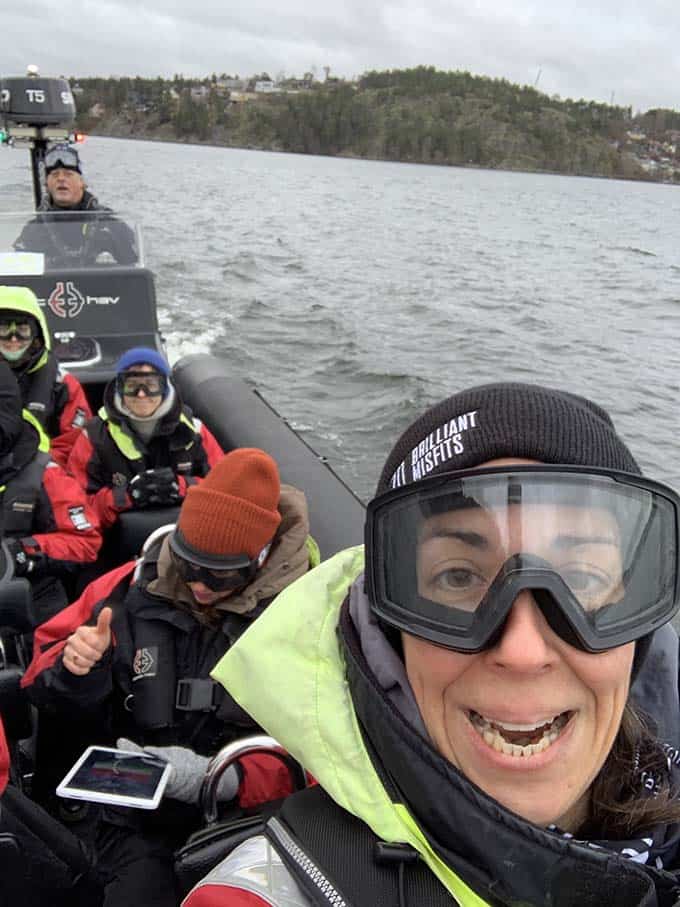 Possibly my best selfie of all time

A few weeks ago I had my tires changed to get the winter tires on, which came hot on the heels of my car's annual service appointment which happened to be a big service this year. I had to do a fairly major repair over the summer, so as I was driving home from the tire change I thought to myself, I sure hope I don't have to spend anymore money on this car for quite some time.

Literally as those thoughts were forming in my brain, like the precise second I was thinking them, I heard a *ding* and another light went on on my dashboard. It was the airbag light, again, so I went back to the shop and had them take a look.

The guy there said it just needed to be reset, no charge this time, but the mechanic warned me it might be coming on due to a low battery. They tested my battery and said it was at about 40% - still the original battery on a 10-year old car, and said it could be fine for a while, but if it got really cold I might have problems. I decided to wait a bit, because, as I mentioned, I've been pouring money into this stupid car.

Well wouldn't you know, this week it got super cold. The temperatures dropped rapidly, and most mornings have been hovering around -8°C.

On Tuesday I had a client meeting that was scheduled to got until the exact minute I had to pick the kids up, so I hatched this genius plan - I'd bike home from the office early, get in the car, drive to the kids' school, and take the meeting from the car.

Except that when I got there, the bloody car wouldn't start. Of course. So I jumped back on my bike, made my apologies to my team and listened to the meeting in my ear buds as I frantically biked to school to pick up the kids.

But I was still in a bit of a pickle because the street where the car was parked was scheduled for street cleaning the next morning at 9am, so I had to move the car by then or get a ticket. I spent a few hours trying to figure out what to do - call the tow truck directly for a jump start? But what if it wouldn't start again in the morning, when it was supposed to be even colder? Call in the morning? But what if they didn't come on time for me to move the car before 9am? Plus I would have to get the kids to school, get my butt to work, etc.

In the end I decided to wait until the morning because I know that when you have your car jump-started you then need to drive around for a while to charge the battery. There was no way I could do that in the evening with the kids in bed, so it made most sense to wait for the morning.

Well, that made for a very exciting morning. First of all, it was the 1st of December, and the "Elves" had come in the night and left a couple of bougie advent calendars for the kids. Big boy got a Hotwheels calendar, and the small one got a Brio train calendar. Both were highly excited.

I had called my roadside assistance number at about 6:15am, so I told the boys they'd have to get dressed and brush teeth BEFORE breakfast, which they did a great job with. So they CAN in fact get their butts out the door on time for school. Duly noted.

The jumpstart guy came at about 7am, so we were bundled up and out the door to check this out, and then we spent some time scraping two days worth of ice off the windows with the motor running. The guy advised me to drive for at least 45 minutes so I took the kids on a drive out to the suburbs and took them through the McDonald's drive thru for breakfast, which they thought was just about the best thing ever.

I tried calling the shop as I drove the kids to school (hands-free, obviously) but the shop was too busy to answer their phone, so I decided to take my chances that the guy would take pity on me if I just showed up, and lucky me, he did.

And yes, I know that I could have just driven to a car supply store, bought a battery, and replaced it myself for about half the price, but I've never done that before, and frankly, trying to change a car battery when it's -10°C out and dark most of the day and I have no idea what I'm doing doesn't sound like my idea of a good time. 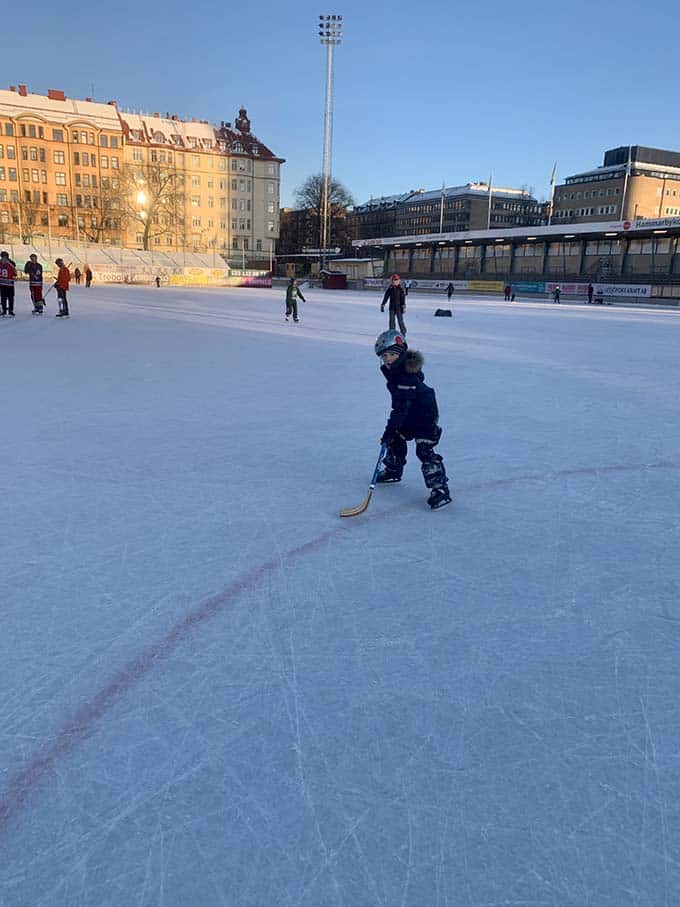 Since everything is freaking frozen these days, we took the kids skating over the weekend. There's a big football (soccer) / track stadium in our hood, and in the winters it gets converted into a big sheet of ice for skating / hockey / bandy etc.

It was Odin's first time on skates, and I must say I forgot how much work it is skating around while trying to hold up a wobbly three-year-old. And that kid is heavy!

Niko did a great job (once we realized that we'd accidentally left the guard on one of his skates, which explained why he was having so much trouble to start with - doh!). As the public skating time came to an end, we noticed one of Niko's school friends arriving, and his dad told us he was in skate school.

We went and talked to the instructors and they said that Niko could test it out, so he stayed for the hour class, and did a great job! The drills were great, and the instructors seemed really good, so we decided to sign him up. It's a bit of a commitment as they do skate school on Saturdays and bandy school on Sundays, but he seems super into it and I think we need to accept we've just reached the activity stage of life with kids.

What is bandy, you ask? It's a Swedish sport that's kinda like hockey except sort of not. It's typically played outdoors on a big sheet of ice the size of a football field. They use a ball instead of a puck, and the blade of the stick is a bit different from a hockey stick. But the fundamentals are the same, and he'll be able to easily transition to hockey when he turns 7 if he wants to.

I'm much more excited about being a hockey mom than a soccer mom, but since the ice is outdoors here I realized I'm going to have to invest in a much warmer winter jacket immediately!

This week I gave an ancient recipe from the archives a much needed facelift. These Orange Earl Grey Muffins are naturally sweetened with honey, made with wholegrain flour, and studded with crunchy millet. That, plus fragrant Earl Grey tea and orange zest makes for some delicious muffins. 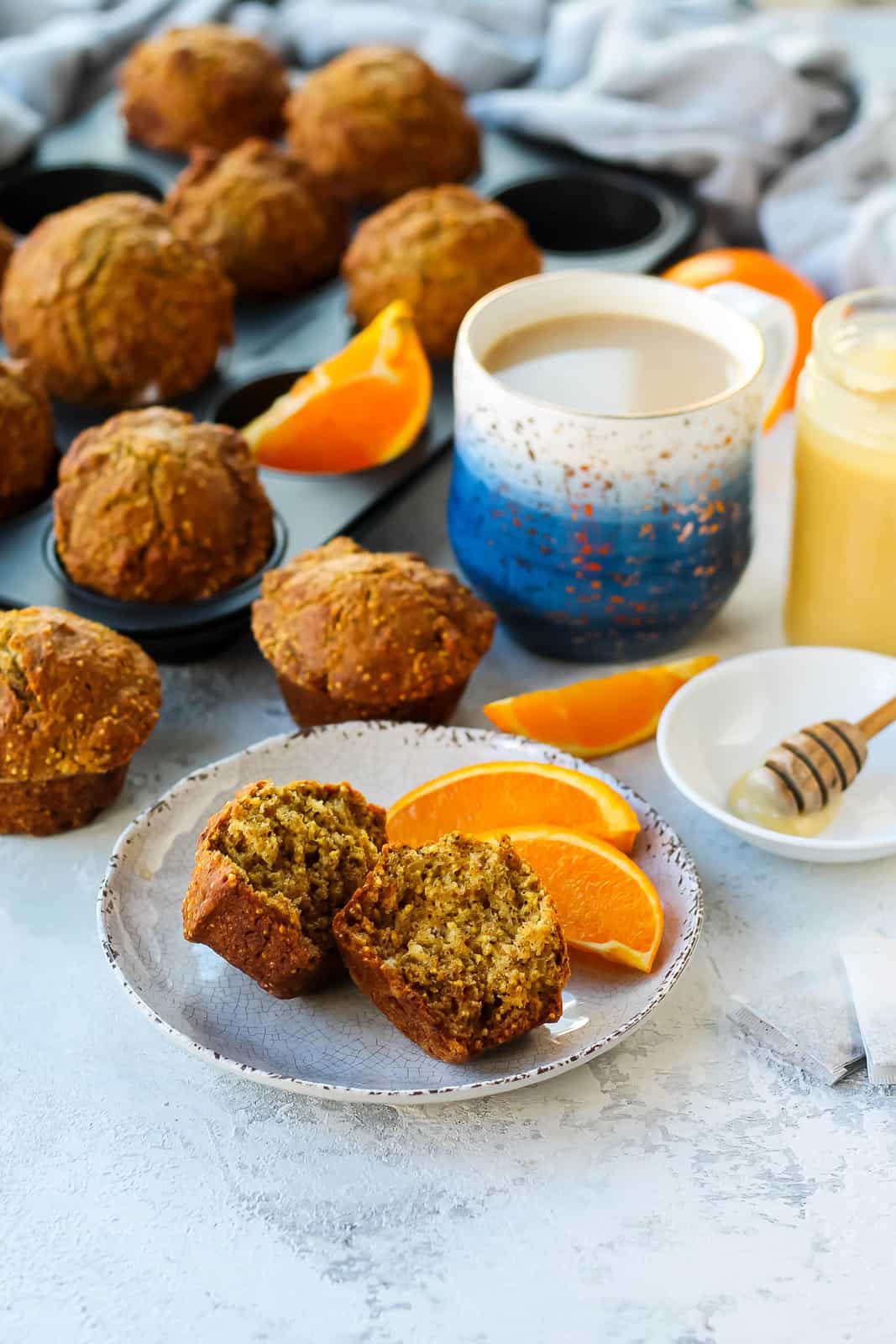 Also an update of our Stuffed Acorn Squash recipe, which is one of my favourite seasonal dishes to make. It's a great vegetarian main dish, but serves equally well as a side. 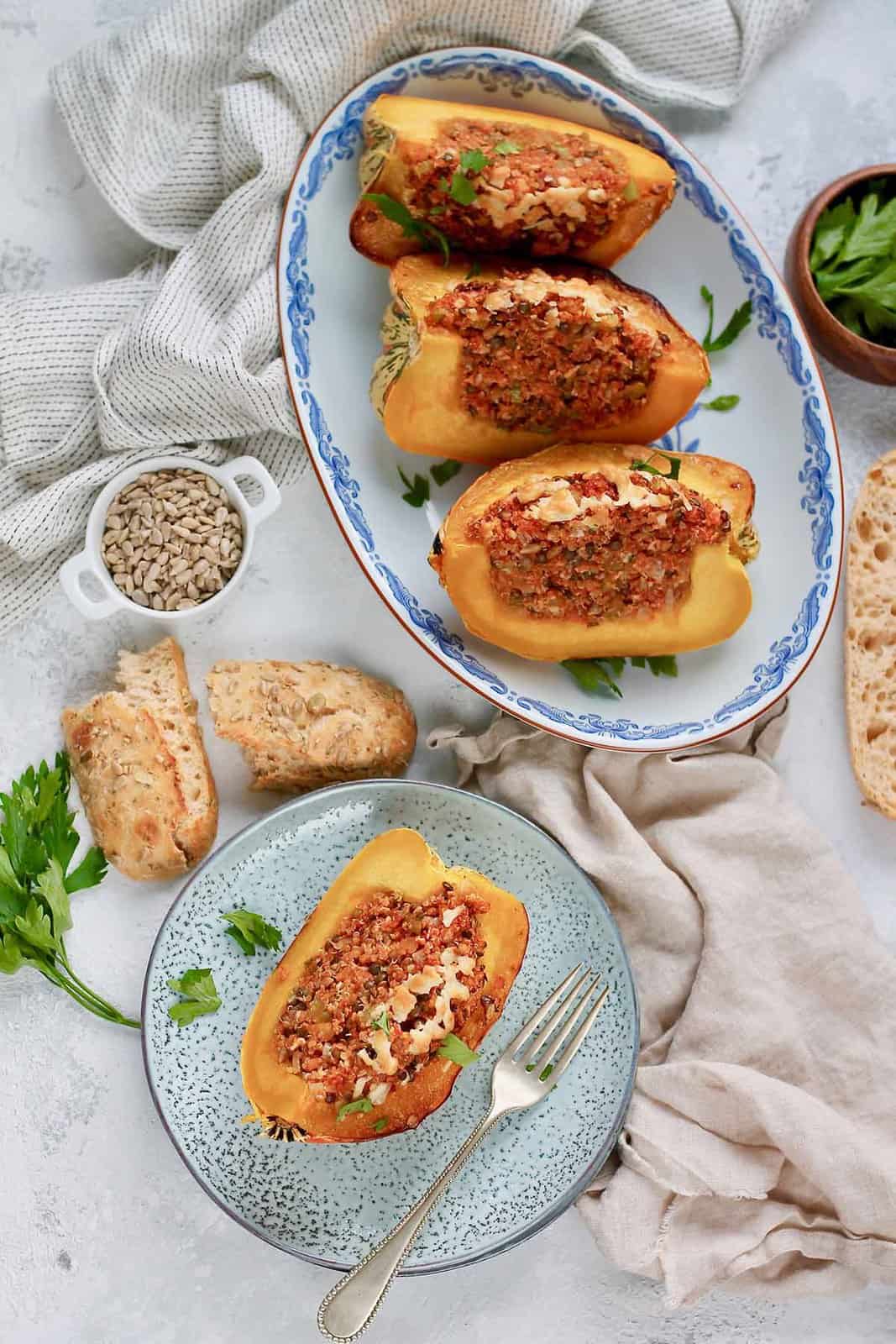 2. Chickpea Fries. This post blew up out of nowhere a couple of weeks ago and is still going strong.

5. Amazing Vegan Gravy. People are still on the gravy train.

Christina left the following comment and 5-star review on our Cheesy Quinoa and Broccoli Nuggets recipe:

Just made these tonight. I swapped the broccoli for frozen diced veggies that I know my toddler likes (potatoes, leeks, carrots, peas and corn). He loved them (and so did I :-). It's the first time I've made veggie patties that didn't fall apart. Thanks for the recipe. 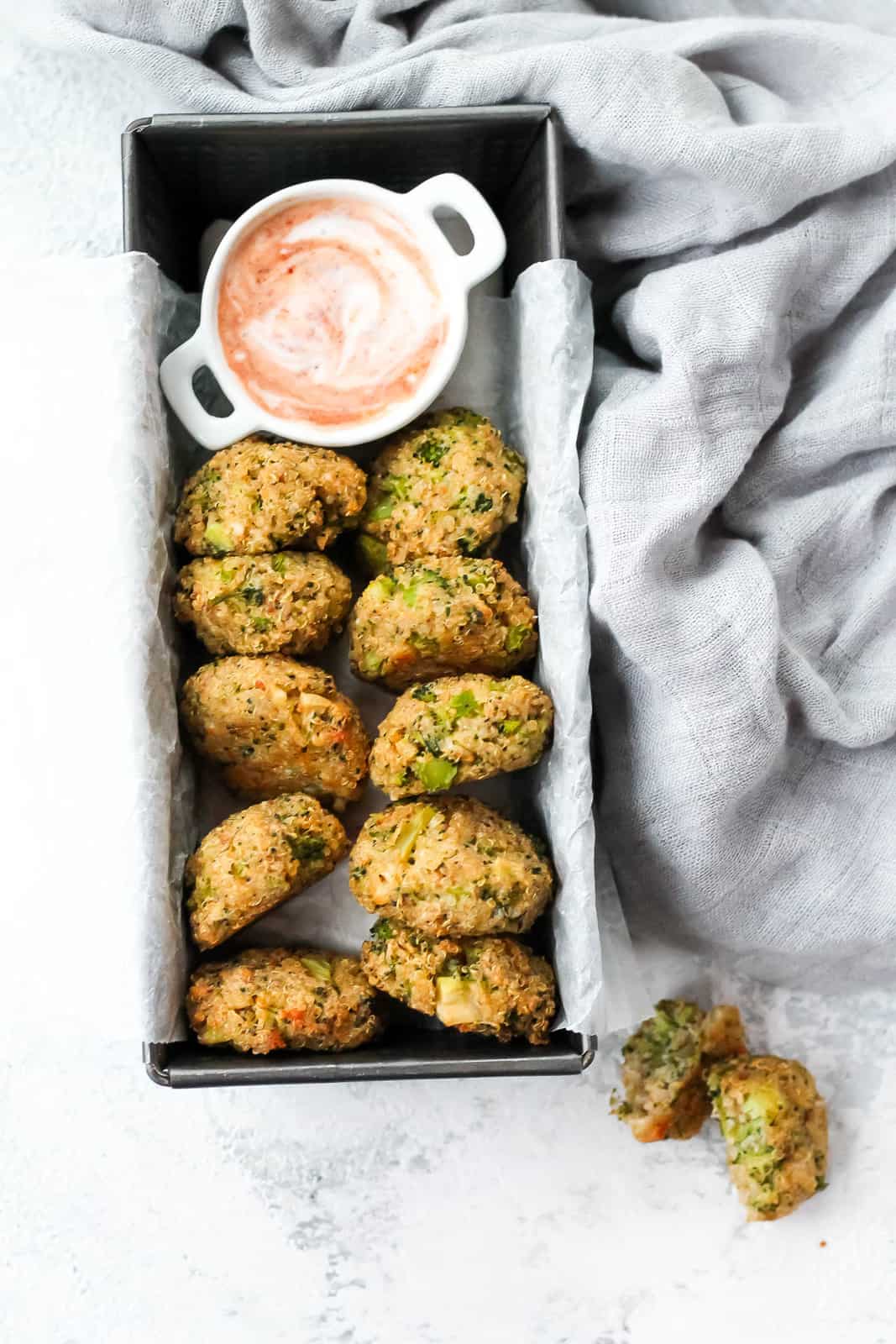 Just wanted to share a delicious and fun meal we made this weekend: make your own falafels. I made a batch of Air Fryer Falafels (which can also be oven baked and are SO EASY), some Mung Bean Hummus, and a side of Crispy Potato Wedges. Then we stuffed our own pitas with falafel hot from the air fryer, with lots of veggies and hummus. It was a big hit with the whole family.

Tuesday - Quick and easy tortellini with broccoli and halloumi.

Wednesday - We're going "fishing". I'm making a big batch of tomato soup and putting out a platter of things to go fishing for in it, like fish crackers, pasta, broccoli, feta, etc. This is the tomato soup recipe I use.

Friday - My office is having a traditional Swedish Julbord for dinner.

Saturday - Family dinner - not sure what's on the menu yet.

Sunday - Pizza night. Pulling some of my Spelt Pizza Dough from the freezer.