This weekend we celebrated our small guy's third birthday.

Man, what a three years it has been. Three crazy, chaotic, sleep-deprived years.

Long-time readers will recall how our bathroom had to get torn out due to water damage in our building shortly after Odin was born, so we lived without a shower or laundry and in a chaotic construction site for six months.

He didn't reliably sleep through the night for 2.5 years, in spite of trying ALL the sleep training techniques and even hiring a sleep consultant. He was a freaking nightmare to breastfeed, and in retrospect I should have phoned it in and switched over to formula much earlier than I did, since we clearly both hated it.

And then we throw in a pandemic, which among other things, means he hasn't seen his grandparents or cousins since he was 9 months old. Oh, and also a separation.

So, it's been a bonkers three years to say the least.

But, we are all healthy (in spite of Odin bringing home allllll the preschool viruses), and although he's still a much earlier riser than I would like, he really does sleep like a champ now. We've also really hit our stride as a family over the past few months, which has everyone feeling relaxed and happy.

Since last year I had a zero percent success rate putting together birthday celebrations for my kids, I decided to take an extra chill approach this time. We asked Odin what he wanted to do and he said he wanted to go to a local indoor playground, so we went there on Saturday morning early enough that it wasn't crazy yet.

We were joined by another couple and their kids, and the boys played hard for a few hours, with a break for over-priced hotdogs and french fries in the middle.

After the playground we came back to my place, and the boys helped to decorate the cake. Odin had been asking for a chocolate cake for weeks, but at the last minute said he wanted a yellow cake with yellow icing, and then changed his mind again to yellow cake with chocolate icing. 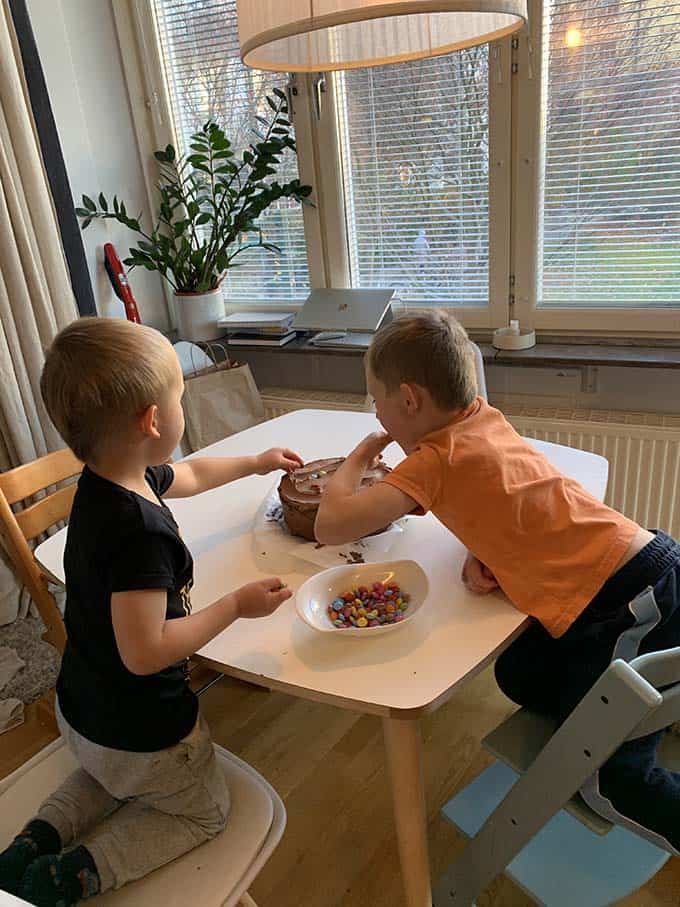 I *may* have coached him towards the chocolate icing, because let's be real, it is the best with yellow cake. I made this Classic Yellow Cake recipe from Divas Can Cook, which is the best yellow cake recipe I've ever made. It's super easy, doesn't require whipping the egg whites separately, and bakes up like a dream.

I also made her Whipped Chocolate Buttercream Frosting, which is so light and fluffy and chocolately and really is the best.

The kids took a maximalist approach to cake decorating, which really challenged my inner control freak, but they had a lot of fun doing it.

We spent the afternoon playing with some of his new toys (among them, this Stomp Rocket, which was a lot of fun to blast off outside in the afternoon sun) and then rode our bikes to a local restaurant for burgers.

Taking the kids to a restaurant for dinner is one of those things that always seems like it's going to be a lot of fun, but in practice is super stressful. We went to a really family friendly place where they're generally pretty cool with kid chaos, but I still feel like I got a few more grey hairs over the course of dinner.

After dinner we biked home for cake, and then went on a "spooky adventure walk" with flashlights, and took turns taking an electric scooter for a spin around the neighbourhood.

All in all, as successful third birthday celebration, I'd say. 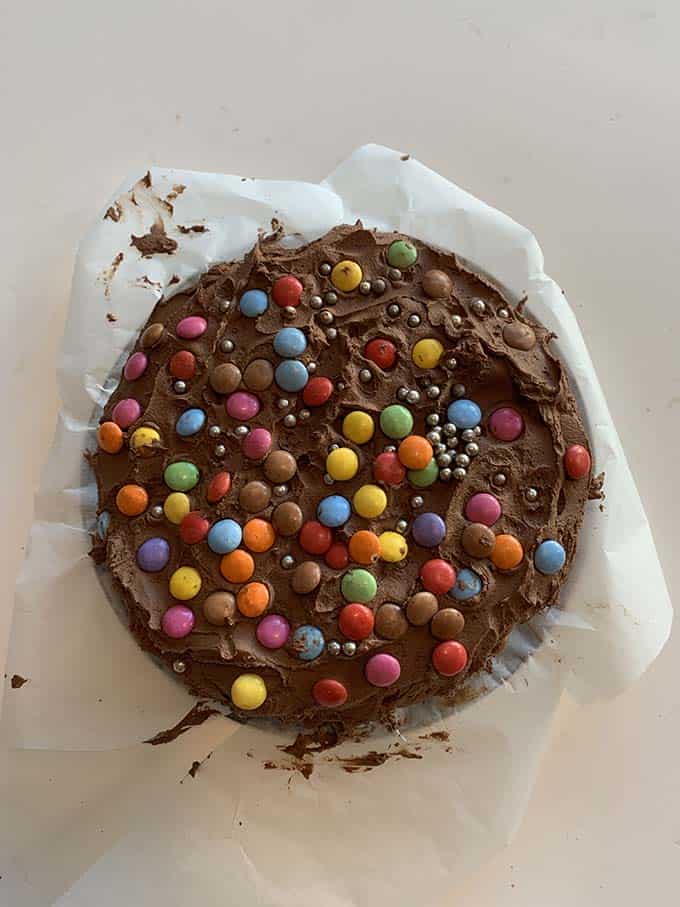 We've been enjoying some crisp autumn weather in Stockholm lately, but it looks like the temperatures are set to drop soon. I've been avoiding switching over to winter tires on my car (they have to be on by December 1st, or with winter conditions) because I have studded tires and there are some roads that they're not allowed on.

In retrospect I should have insisted on friction tires, rather than studded tires, when I bought the car, but it was super snowy then and the studs seemed so safe so I kept them. But one of three main roads you're not allowed to drive on with studs is in our area, and I must say it's been so much easier getting around with summer tires on.

It's also been prime running weather lately, but last Monday when I was out for an evening run I injured my mother-effing calf again, and still has yet to release. This has been a recurring issue, so clearly it's time to go see someone about it.

I'm super annoyed that I can't run right now as I was finally feeling super strong and like I was actually enjoying it, and now it's a waiting game of healing and rehab again. I don't want to lose the fitness that I've gained, but I'm trying to be patient with the process and not get into too much of a twitch about it.

I've had a lot of questions from friends lately about whether I've lost weight. Truthfully I don't know because I don't own a scale anymore, but I suspect that I have because running usually makes me quite lean.

It's a weird thing though when someone gives you a compliment for losing weight because what they're really saying is, "Congratulations! You take up less space now!" I bumped into a friend's husband when I was heading out for a run and he said, "Hey, you're looking really healthy these days!" and I reflected on how well versed he was in body positive language.

I always cringe when I get these kinds of comments about my body, because sometimes when someone loses weight it's not positive - like maybe they're sick, or dealing with anxiety or something. And yet those people often find themselves fielding "compliments" about their weight loss anyways.

Also, because all bodies are beautiful, and the science is crystal clear on the fact that size does not equal health.

I'll get down from my soapbox now, but I think that we could all benefit from trying to find ways to give people compliments that don't center around the way they look. And also just refrain from making comments about people's bodies, generally.

This week we kicked things off with a shiny new recipe for Vegan Pumpkin Chocolate Chip Cookies. These beauties are soft, cakey cookies made with real pumpkin purée, wholegrain flour, and pumpkin spices. 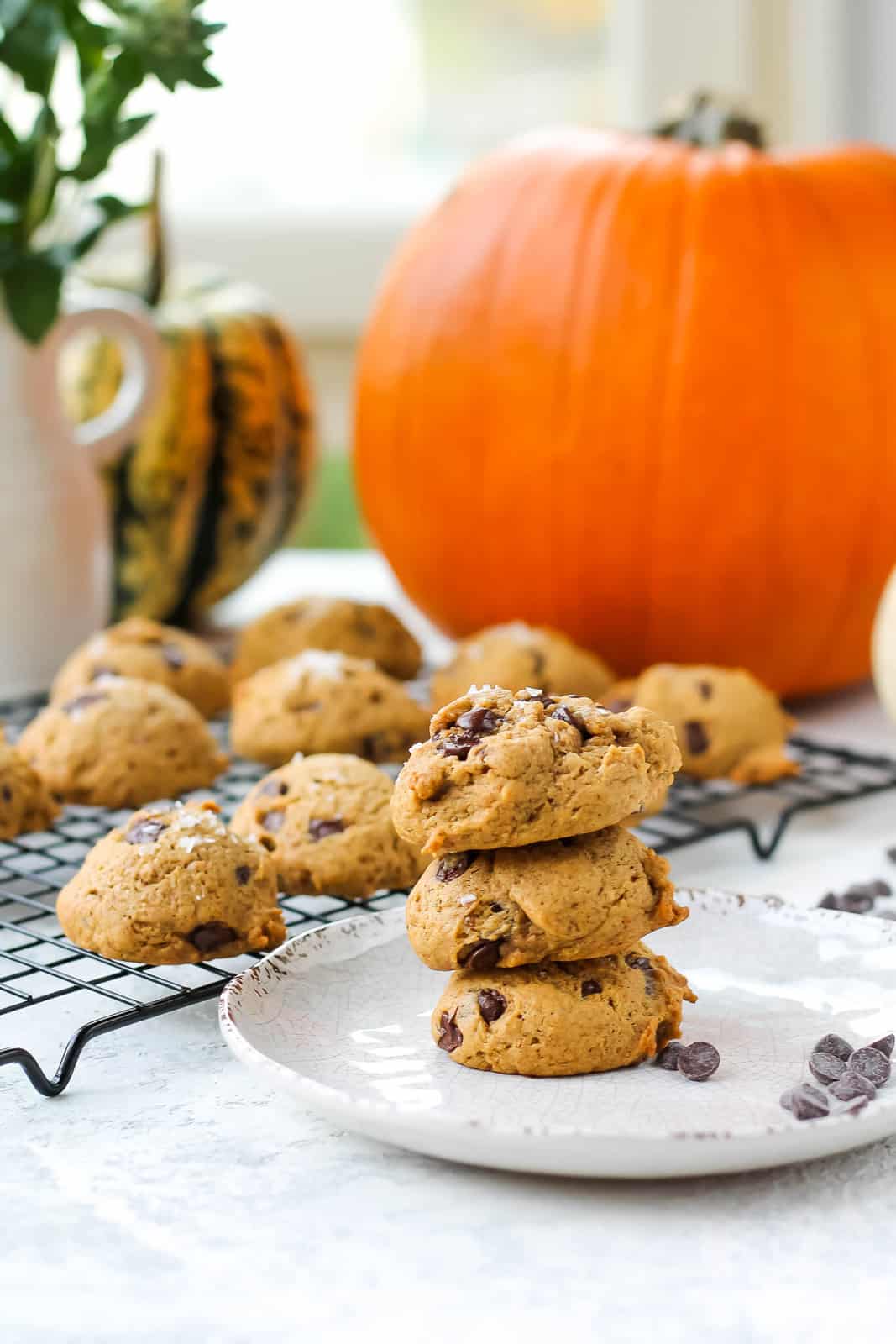 And next, this simple recipe for a DIY Oat Milk Matcha Latte. Skip the expensive coffee shop lattes and make your own - it's super easy! 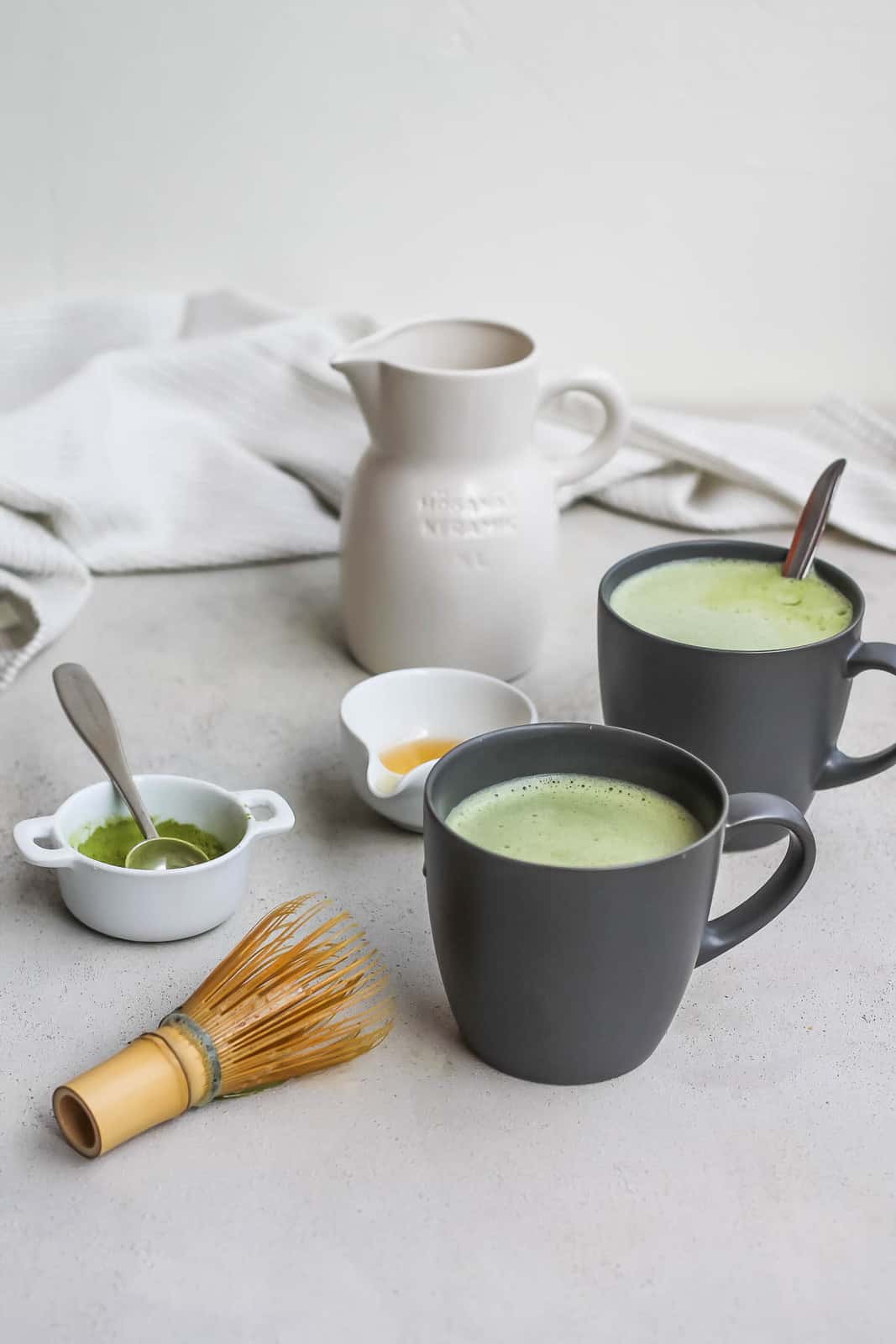 This recipe was a big winner! It was a risk making something new on weekday, but it came together so easily, did not require much thinking because the recipe is so easy to follow and I could just let it simmer for a bit and do other stuff.

I chopped up the carrots to small pieces (worked well too) and my store was out of zucchini so I used some sweet red bell peppers (the pointy ones) that I had lying around. I used canned lentils (they were sitting in my pantry) and that worked fine too, and added some vegan chicken pieces just for texture. Served it over whole grain rice and it was great!

Yes! Thanks for the reminder that it's been far too long since I made this simple plant-based dinner. 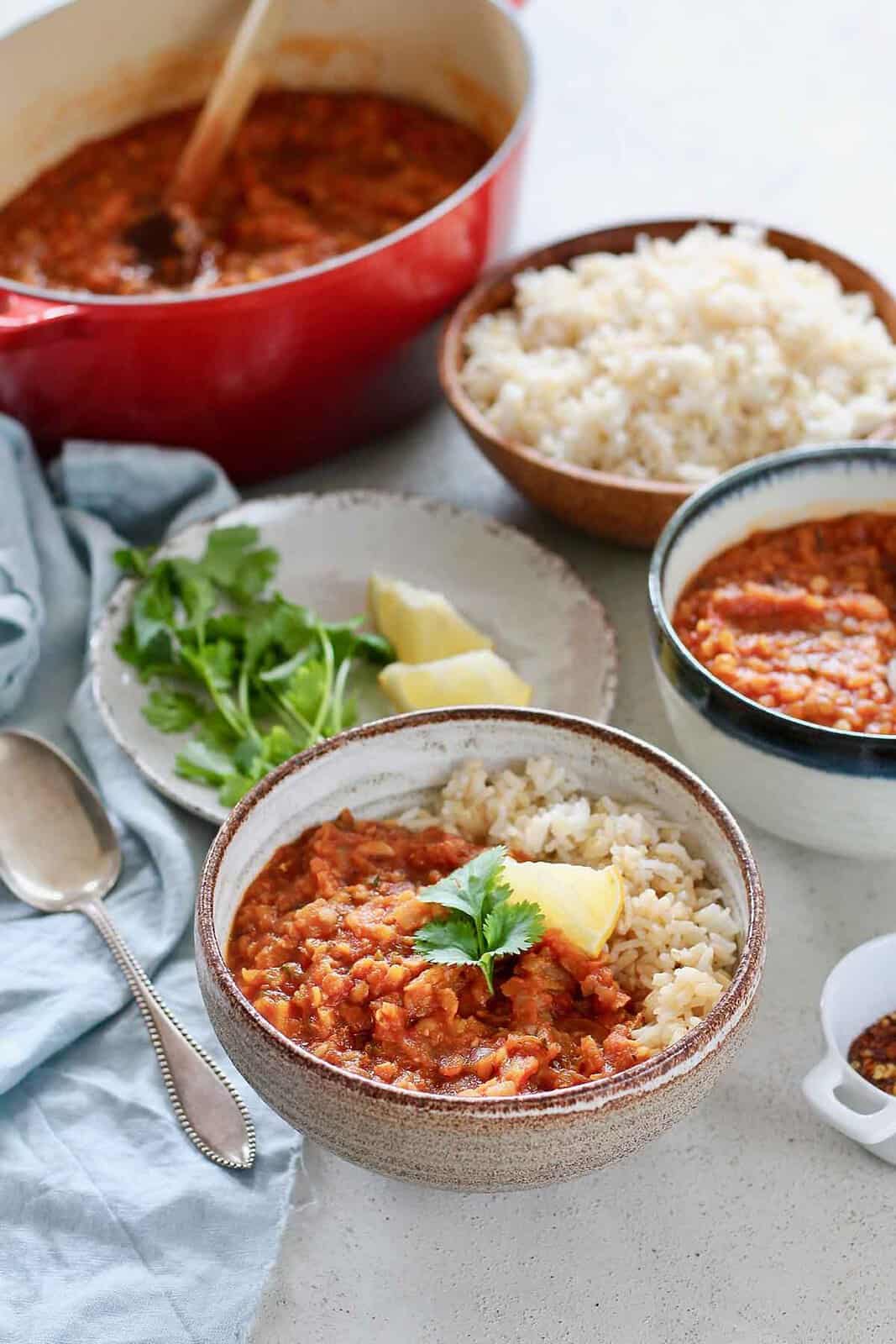 Is it just me or are the weeks just flying by these days?!

Monday: I have a bunch of leftover Mac and Cheese (Sarah's Instant Pot Mac and Cheese recipe) in the fridge, so we'll be having that with some veggies.

Wednesday: I have plans with Emmeline from Always Use Butter! Who knows what deliciousness will occur when two food bloggers get together!

Thursday: Out for a client dinner. Should be fun!

Friday: Snack dinner! Haven't had one of those in a while.

Saturday: Have a babysitter booked so we can go out for dinner WITHOUT the kids. Really looking forward to that!