You guys, I think I bought a lemon.

I've had my car for three and a half weeks and have been in the shop four times already, and I am beyond frustrated.

The first three times were related to the airbag light coming on, which they had to troubleshoot and reset. It was a pretty minor fix, turned out that the contacts needed cleaning or something, but was still irritating to have to take it in three times to get it figured out.

But then on Thursday when I got home from school with the kids, I parked the car, got our stuff out, locked it, and as we walked away I noticed that one of the brake lights was on. Which is weird, right? The car is parked, turned off, and locked. Why is a light on?

It was pretty dim, and I kept second guessing whether I was actually seeing a light on or if it was a reflector, but when I came back out a couple of hours later in the dark, it was very clearly a light on. Ughhh.

There was nothing that could be done at that time of day, but I spent some time in the Volkswagen forums and read that one of the causes of this particular light staying on when the car is turned off is a leak in the windshield fluid system. Curiously enough, a few days prior, I'd found that the rear windshield didn't really squirt any fluid when I tried it, but I had assumed the fluid was low and I'd top it up the next time I got gas.

Also, I had noticed a VERY strong smell of windshield fluid in the car when I used the front windshield wipers, but figured maybe it was because they hadn't been used in a while? I dunno, I'm not a mechanic.

So on Friday morning, I was relieved that the car actually started after this light had been on all night, and then I called the shop where I had just been on Monday with the airbag light (hiiiiii, me again!) and they said to come in right away. I showed them the light and told them what I'd read in the forums (seriously, that must be the most annoying kind of customer) and when they tested the windshield wipers you could see that not only did fluid not really come out of the back, but it came POURING out from under the front of the car.

So, yep. We have a leak somewhere in the system. I had a crazy day with back to back to back meetings and really needed the car, so they disconnected the light so that it wouldn't drain the battery over the weekend, and then I have to take it back in on Tuesday for repair.

And yep, I'll be calling the dealer on Monday morning to do some serious complaining. I bought an extended warranty with the car, so I assume I will not have to pay for this repair, but having to do this many repairs so soon is insane.

Funnily enough, a friend of mine bought the exact same car (same model, same year) and also had to repair the windshield fluid system within one week of owning it. So it must be a flaw with this particular car.

Here's hoping this will be the end of my car troubles for a while. Seriously, this thing has created just as many headaches as it has solved thus far! 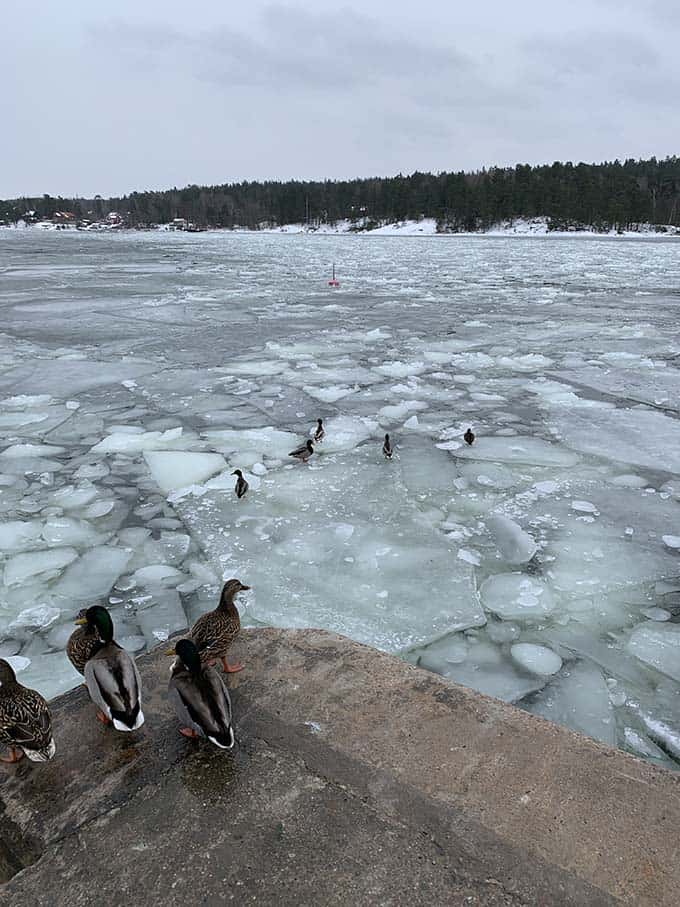 On Friday evening I had an opportunity to go see a friend who lives on a small island just off the mainland. I had a late meeting on Friday (well, not late, but at the very end of day), so was a little concerned we may not make the ferry, but if we didn't we had a solid back up plan: walk across the ice.

My friend who lives on this island has a car on the mainland and a boat that they drive across, but the boats have been frozen in for several weeks. There is an ice breaker ferry that runs hourly, but most of the residents of this island just walk across, with special beacons that they wear around their necks in case someone falls through the ice.

And, of course, the ice is tested every morning to ensure it's still thick enough to safely cross.

We ended up making it in good time to get the ferry, but could see people on the ice as the ferry clunked through the broken ice on the other side, and figured we'd walk back in the morning.

Um, no. Overnight it had started to rain and dissolved the layer of snow on top of the ice. I think it was still thick enough to safely cross (we did see some people out there) but was clear, and wet, and very slippery.

We seem to be finally coming out of this very cold snap we've had over the past 6-ish weeks, and I for one am ready for the snow to melt and be gone. I'm so ready for spring, both literally and emotionally. I'm sure many of you feel the same.

Hey, can we talk about halloumi for a minute?

I know I've been posting a lot of halloumi recipes lately. There are two reasons for this. First, I freaking love halloumi. And second, I stumbled on a goldmine of good keywords for halloumi recipes.

I spend a lot of my time doing keyword research. If I have an idea for a recipe the first thing I do is plug in into my keyword program to see what the monthly search volume is, and how competitive the keyword is.

This tells me whether or not the recipe is worth my while in terms of the effort it will take to get it ready for the blog (multiple rounds of recipe testing, photographing the recipe step-by-step and styled "hero" photos, writing the post, etc). If it's a recipe that not enough people are searching for, or a recipe that I'll never be able to rank for, I generally don't do it.

Sometimes if I have an idea for a recipe that I can't find a good keyword for, I'll make it anyways if I think it'll do well on Instagram or Pinterest, or if it's the kind of thing my most loyal readers (that's you!) would be into. But to be honest, those are pretty rare.

At the end of the day, this blog is a business, and if a recipe isn't going to perform, it's not worth my time.

So, I've been doing a lot of halloumi recipes lately, which has also corresponded to a lot of emails and comments from American readers who are unable to find this magical salty, squeaky, non-melty cheese. I'm super bummed for you guys!

It baffles me that my sister is able to find halloumi in a small-town grocery store in Canada, but it's not available in big cities in the US. Makes no sense! Y'all need to put some pressure on your local cheesemongers to start importing this stuff. Start a halloumi revolution!

I have one more halloumi recipe on my radar, but may put it on ice for a while and see if the halloumi situation improves. I dunno, does halloumi stroganoff sound appealing to you? Is that a recipe you want?

This week we kicked things off with on of the most tested recipes I've ever put on this blog.... Halloumi Carbonara. If you can't find halloumi, I'm sorry. Make it with Tempeh Bacon instead. 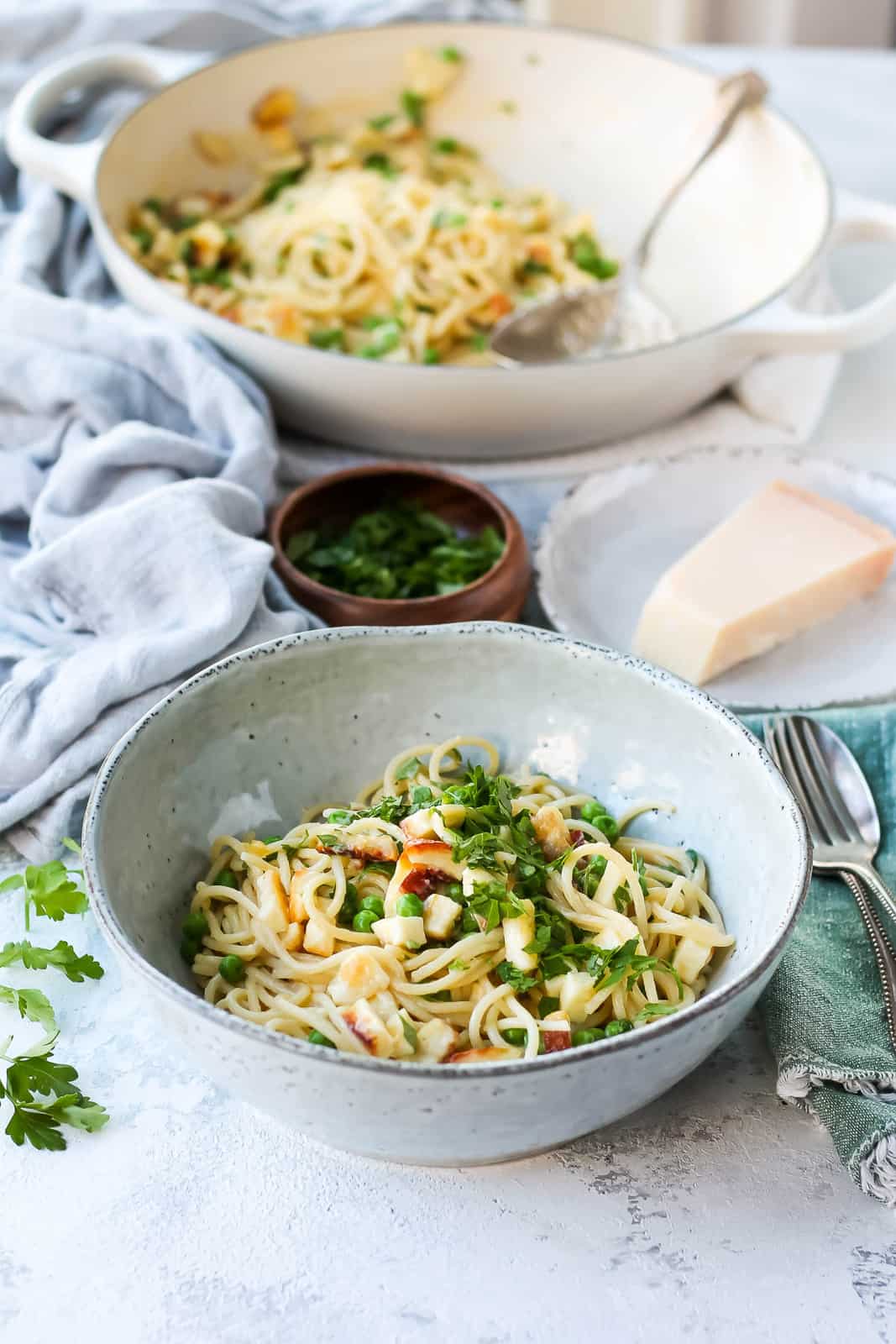 And then, a reboot of one of my favourite Vegan Lentil Soup recipes. This guy is loaded with plant-based protein and packed with veggies. 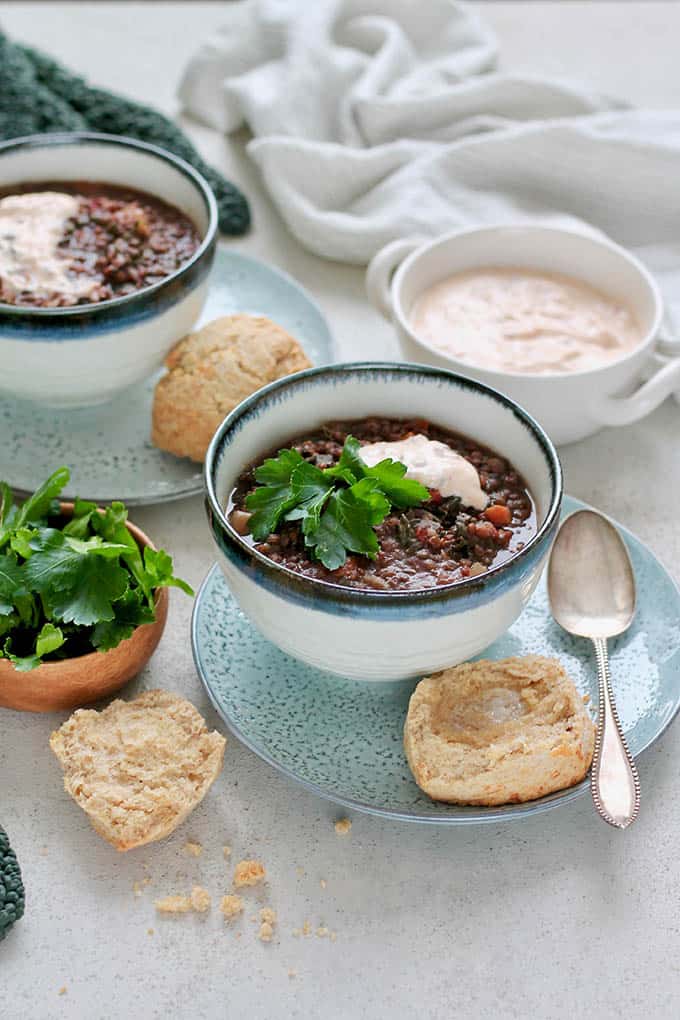 2. 10-Minute Vegetable Ramen Noodles. I've been on a tear with these lately.

3. Turmeric Latte Mix. So simple and so good.

4. Collagen for Vegetarians. Well hello! A newcomer to the Top Five this week!

This is such a great recipe, Katie! This is my second-go-ground making it and I just can’t believe how easy it is to come together – very minimal hands-on time! I only ever have long-grain brown rice, and the cooking time for me seems to be the same. I read recently that long grain brown rice tends to contain less starch than short grain..is this the case? Regardless, the texture with the long grain is creamy and delicious. A real winner!

Yes! I love this recipe too. To be honest I don't know the answer to the starch question, but as risottos are typically made with short-grain rice I would guess there is some truth to it. Good to know that it works equally well with long-grain brown rice. 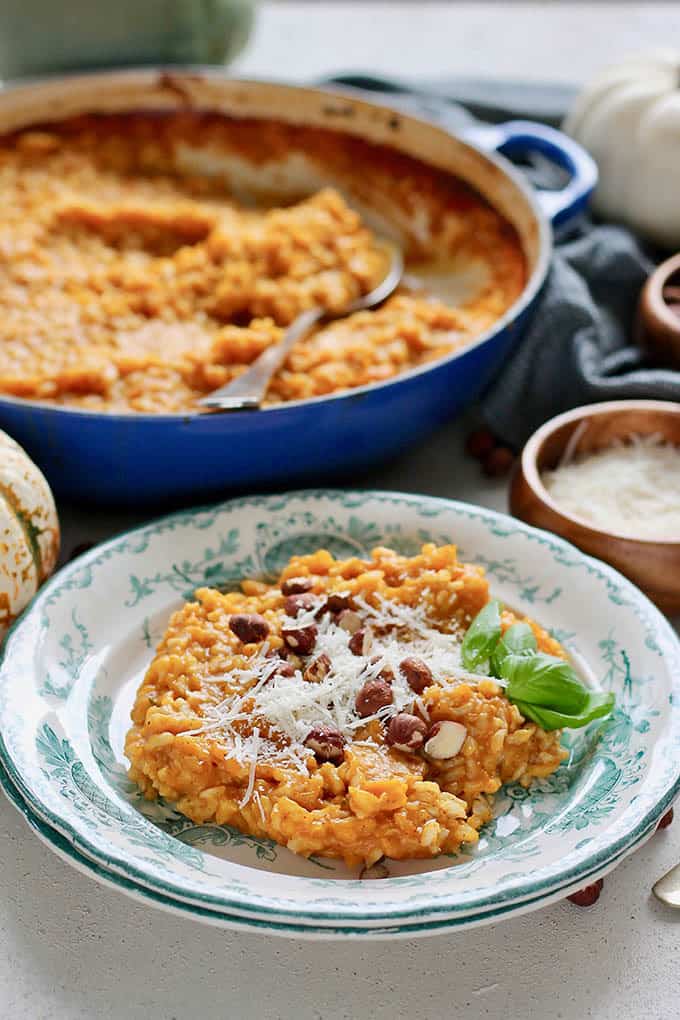 Week after week I am finding that I don't have the need or the capacity to cook all of the meals I plan during the week. Either there are leftovers that need attention, or I'm too tired or busy to cook what was planned, and end up pulling something out of the freezer or doing something super simple.

Last week I had a lot of photoshoot leftovers that needed eating, so there are a few items on the menu again this week, that got rolled over from the week before.

Sunday: Pizza night, as per usual. I've been making double batches of my Spelt Pizza Dough and freezing the dough in single portions.

Thursday: Wieners and beans. I told Niko that this was a thing and he's been asking for it ever since.

1. Are caffeinated foods safe to eat for an energy boost?

2. The activists working to remake the food system.

3. The numbers don't tell the whole story. Fabulous article by one of my favourite writers about how unemployment statistics can't capture the full extend of what women have lost.

5. This gives me some hope: A quite possibly wonderful summer.