Hey! How was your Halloween?

It was really interesting to follow on social media and see how different communities around the world were handling things. Some had totally cancelled trick-or-treating and had other activities instead. In my brother's neighbourhood in Vancouver there were lots of elaborately decorated houses with caution tape across the porch, and these homemade "candy chutes" that kids could hold their bags under.

I love that people went to such efforts to make it a special Halloween even in this totally messed up year.

Our Halloween was fairly mellow. The Swedish government released new recommendations for Stockholm on Thursday, amid rising infection rates, which included avoiding indoor places such as libraries, swimming pools (yet municipal libraries and swimming pools are still open as usual) and museums, not having physical contact with people outside of your own household, and not having parties.

Two out of our three Halloween parties proceeded in spite of this - one was outdoors, and quite small and the other was kids in Niko's class who are together all the time anyways, but adults did not attend. The third was cancelled, and so we took the opportunity to have a nice family dinner instead.

Did you guys cook your Halloween Pumpkins? My How to Cook a Jack o' Lantern post has been blowing up this week, which makes my heart happy. 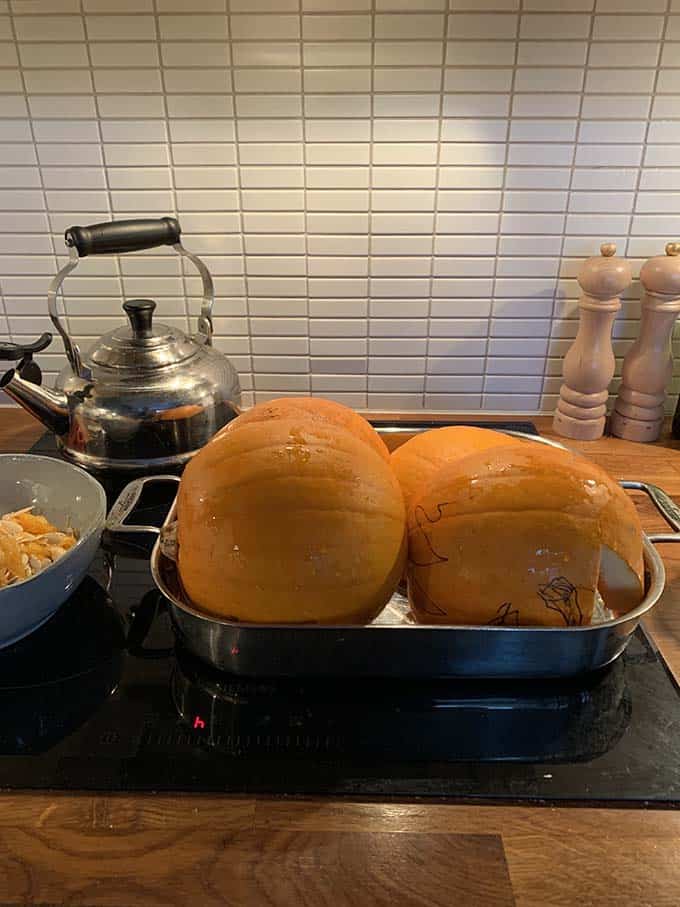 I'm giving these guys a new life as pie

You guys, I failed my driving test.

It was terrible. An unmitigated disaster. And as someone who has been driving for over 20 years, it's awfully humiliating.

The worst part is that my entire office knew I was taking the test, so when I called into a meeting a few hours later the first thing everyone asked was how it went. And then the sympathetic groans when I told them.

I actually scored very well on driving, and the examiner (who was very nice - I have heard horror stories, but my guy was very kind) said it was obvious that I was an experienced driver. Where I messed up was the actual handling of the car.

In Sweden you can either take your test on an automatic or a manual, but if you choose automatic you're never allowed to drive a car with a manual transmission - it says on your license which one you have. If you choose manual one of the things that you're graded on is "eco driving" or driving in the most environmentally friendly way possible.

What this means in practice is that they want you to drive in as high a gear as possible at all times. So city driving at 50km/hr I'd normally use 3rd gear, but they expect you to be in 4th or 5th. Then you're supposed to avoid using the brakes, rather gearing down and "engine braking" to slow down.

The test was on this new-fangled 6-speed Volvo which may as well have been a space ship. The last car I owned was a 2003 Volkswagen Jetta (Wolfsburg edition - I loved that car!) and cars have certainly developed a lot since 2003.

The car I've been practicing on was a Mercedes (because obviously driving schools in Sweden use Mercedes) which is quite new and I had no problems driving it. At all. 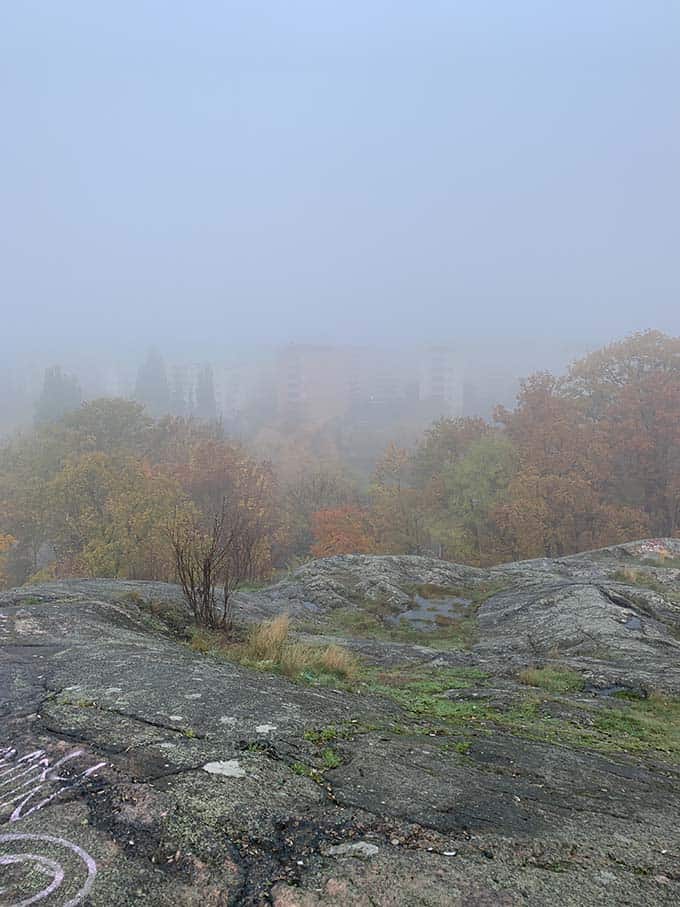 This Volvo though, it threw me. I could NOT get the hang of shifting gears in it. And since I had to be "eco driving" I was often in a much higher gear than I'm comfortable driving in at that speed.

Every dang time I tried to gear down to go through a roundabout or junction, I stalled the car. Every. Time.

So that meant that I'd be stuck in the middle of a roundabout trying to get the car re-started, or headed towards a high-speed junction ready to merge with traffic and then suddenly the engine would be off.

And then of course, since it was going so badly, I clenched up and was so focused on just trying to drive this space vehicle that I missed speed signs and was driving 30km/hr in a 50 zone, and so on. It was bad. Baaaaaaad.

This whole process has been so long, so time consuming, and so expensive I just wanted it behind me. Alas, it was not meant to be.

I've booked another test in November and am going to try and see if I can use the driving school's car instead so at least I'll be taking the test on a vehicle I've driven before.

Better luck next time? I sure hope so! 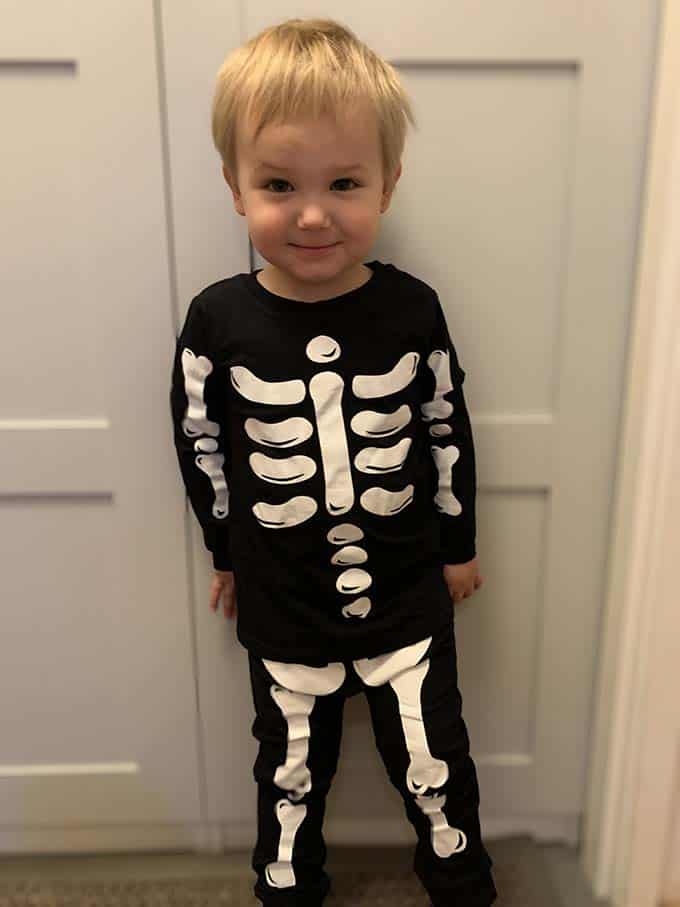 Guys, any tips for dealing with a two-year-old who loves beating on his parents and older brother?

I haven't heard from daycare that they have a problem with him hitting other kids, but at home dude is relentless. I've tried time-outs, I've tried patiently explaining it isn't nice, I've tried being sad and showing him that it hurts us, but Odie don't care.

What I'd really like to do is hit him back so he can see how it feels, but I'd have Swedish social services up in my businesses so quickly you wouldn't believe it, and I do not need that headache on top of everything else.

So, what works? Anything? Nothing? We just ride out this brute phase he's in?

This week we kicked things off with one of my favourite edible gifts, Homemade Vanilla Extract. This recipe takes two ingredients and about three minutes of your time, and it is WAY cheaper than buying vanilla extract from the store. 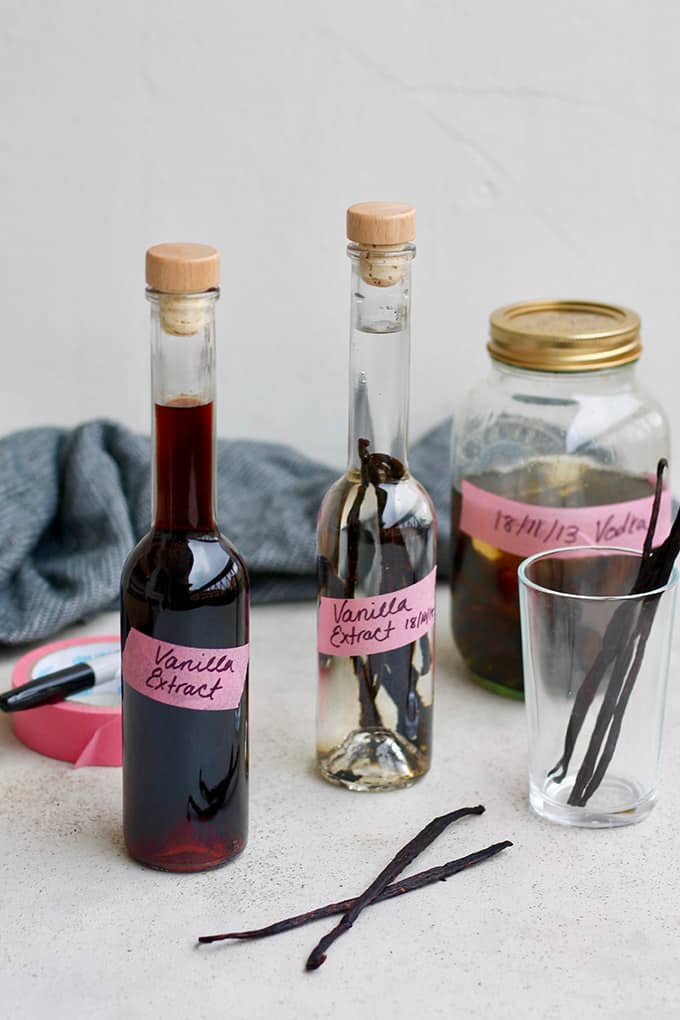 Next up, learn how you can cook a whole butternut squash in the Instant Pot. No peeling, no chopping, just a whole squash cooked until buttery tender. Check out this post on Instant Pot Butternut Squash for more details. 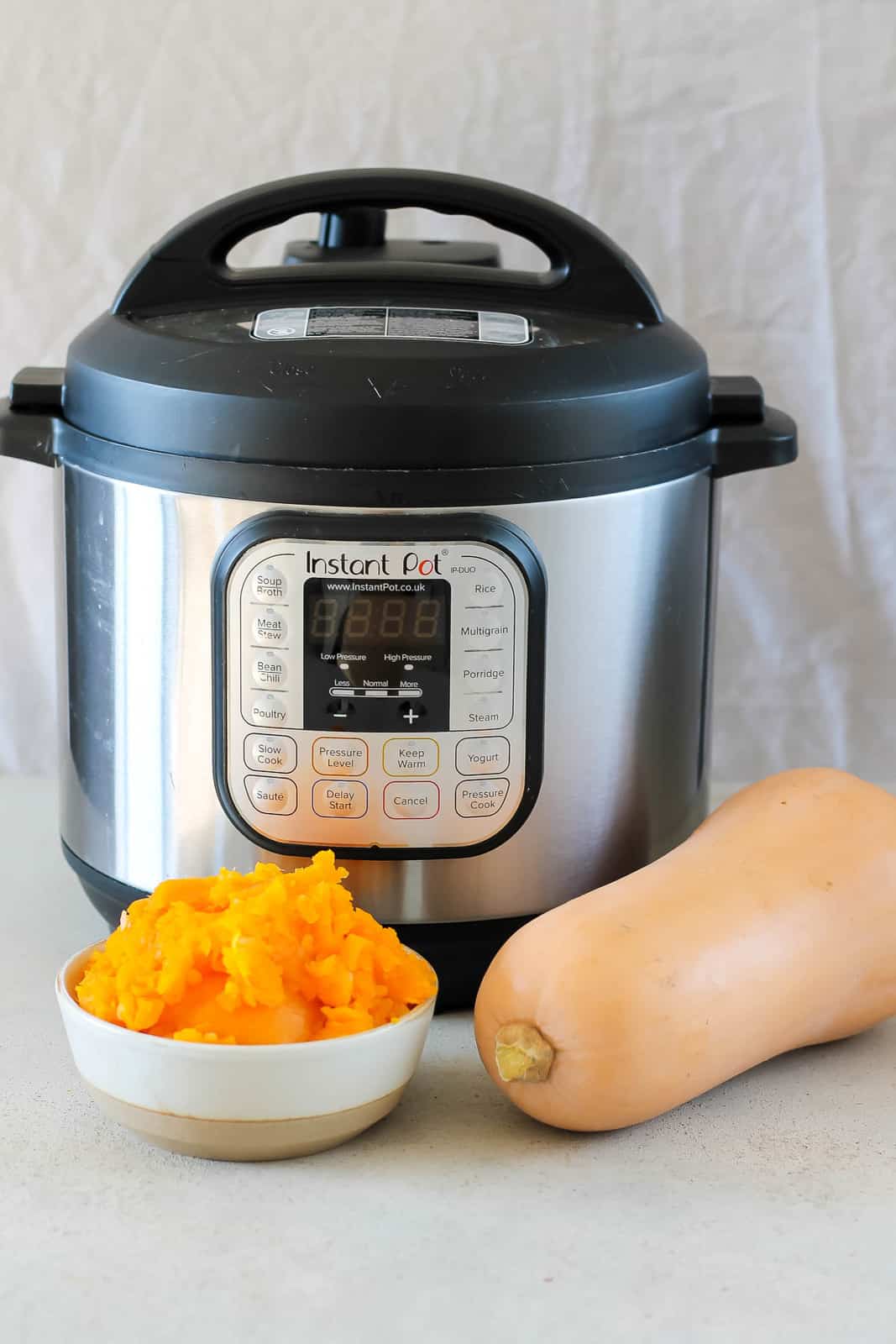 1. Homemade Pumpkin Purée. This post actually out-paced the mung curry in the past few days.

4. Pumpkin Seed Butter. I'm going to have to make a new batch of this soon.

I just want to say THANK YOU, this recipe is delicious! Since going vegetarian, I’ve struggled to find a decent gravy to go with a Sunday roast… until now. The flavour is amazing, and the texture is just right (unlike a lot of store-bought vegetarian gravy). I could practically drink this stuff, it’s so good. And it’s quick and easy to cook too. I added a dash of vegan Worcestershire sauce and a sprinkle of onion powder just to give it a little extra. Perfect!

No one would judge you for drinking this gravy, Grrrr. It really is that good! 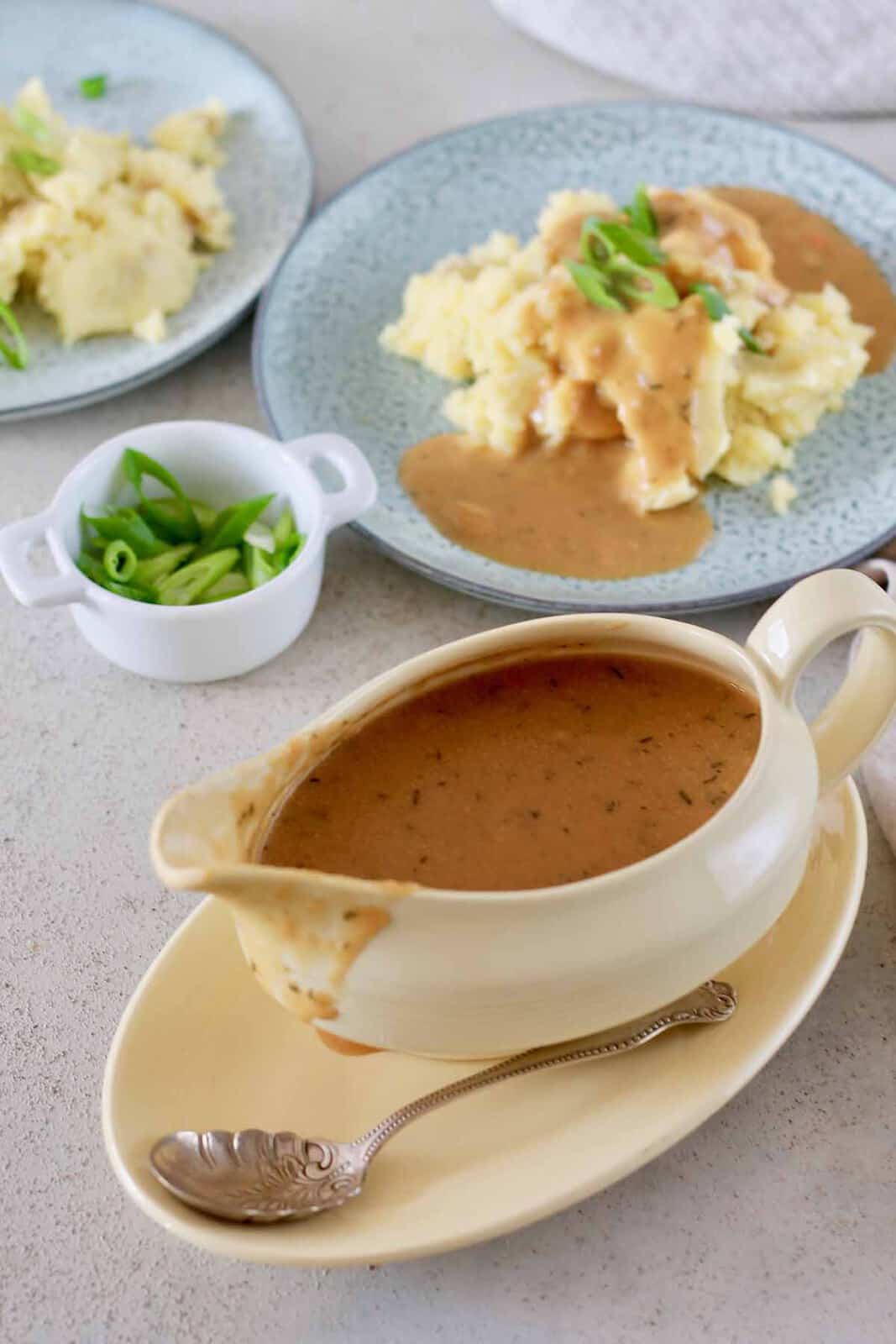 I'm spending Sunday (today, if you're reading on publication day) shooting a bunch of recipes for the blog, so a lot of what we're eating this week will be going through that food. I also want to use up some ingredients from previous grocery delivery recipes, so some of our dinners are a bit hodge podge.

Here's what we're having this week:

Sunday: Photo shoot leftovers. I'm sure I'll be too tired for anything else.

Monday: Halloumi pasta (one of the recipes I'm shooting).

1. There's nothing magical about intermittent fasting.

2. Are apples really that good for you?

3. Brain-healthy foods to eat every day.

5. Why schools are struggling to feed students.

« Just Between Us
Turmeric Latte Mix »