Well, we survived a week in the Stockholm archipelagos without any tick bites. Phew!

Without any ticks that I KNOW OF, as I realized on my last day when I brushed one off of my arm, the little buggers are a lot smaller than I was expecting. 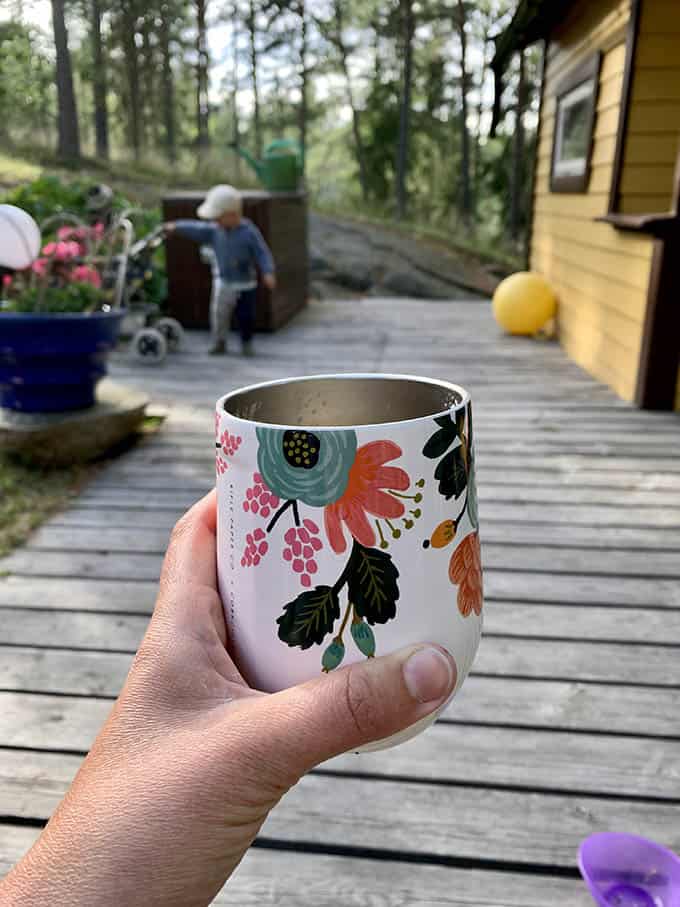 Back in December, a literal lifetime ago, I picked up a couple of these Corkcicle outdoor drinking glasses at Anthropologie in London. I gave one to my friend and kept one for myself, and I packed mine along to the house we rented, picturing myself drinking icy rosé down by the water.

It turned out to be far too cold to enjoy rosé (I packed an un-opened bottle back home, the shame!) but it was a great glass to have with me. I used it for tea in the morning and it kept it nice and hot even though the house was freezing cold. In the afternoons I’d drink beer out of it, and in the evenings hot water.

I’m pretty into drinking beer from a glass these days, rather than a can or a bottle, because I am nothing if not a very fancy lady. The house we were staying in had a huge collection of nice beer glasses, but one day I had just sat outside with a full glass of my favourite low-alcohol beer, when Niko kicked the glass over, spilling the beer, breaking the glass, and then stepping down on the broken glass as his grand finale.

Lesson learned: stick with the outdoor drinking glass from now on. 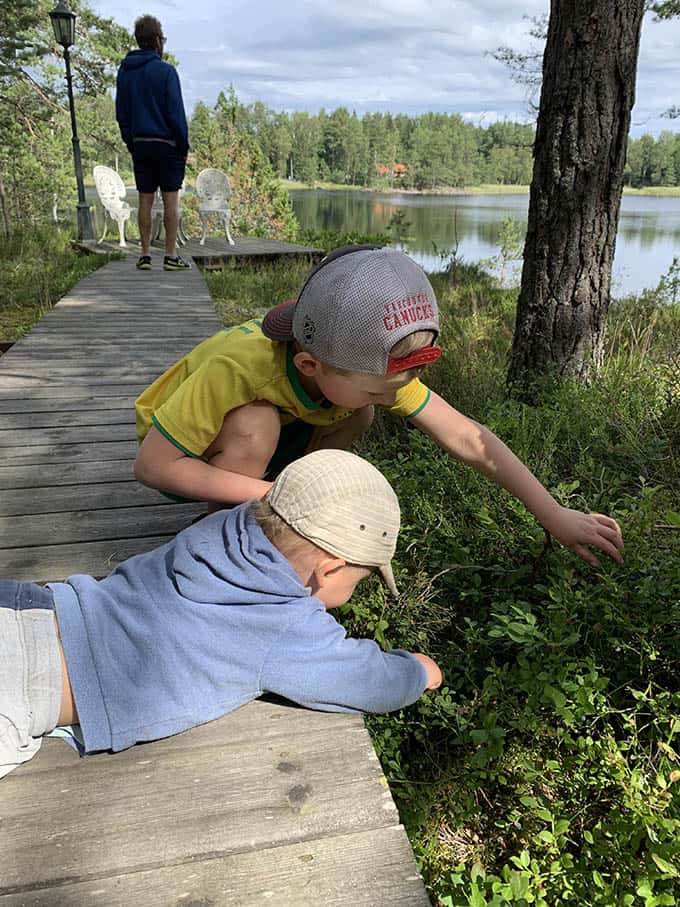 The boys had a great time and were undeterred by the crappy weather. Maybe since they were actually born in Sweden it’s in their nature to embrace the unpredictable summers, whereas I have expectations that were going unmet.

Or maybe they’re just normal kids. Who knows. Whatever the case, they had a great time burning around the property, picking wild blueberries, playing with toys the well-stocked “lekstuga”, swimming, climbing things, etc.

They wore the same clothes for most of the week, and were dirty, sticky, well-fed, happy kids.

There was a fire pit on the property, so Paul would light a fire each night after dinner and the boys roasted marshmallows. We introduced Niko to s’mores, though he was really more of a purist and preferred toasty ‘mallows right from the stick.

We swam in the tiny lake in front of the house, and the bigger one just a couple of minutes walk away, and both boys were enthusiastic swimmers. There was a janky old wooden row boat that required several minutes of bailing before it could be used, and we’d row it around the pond in the evenings.

It was not home, not the Pacific Northwest, not the place that fills me up. But it was good enough. 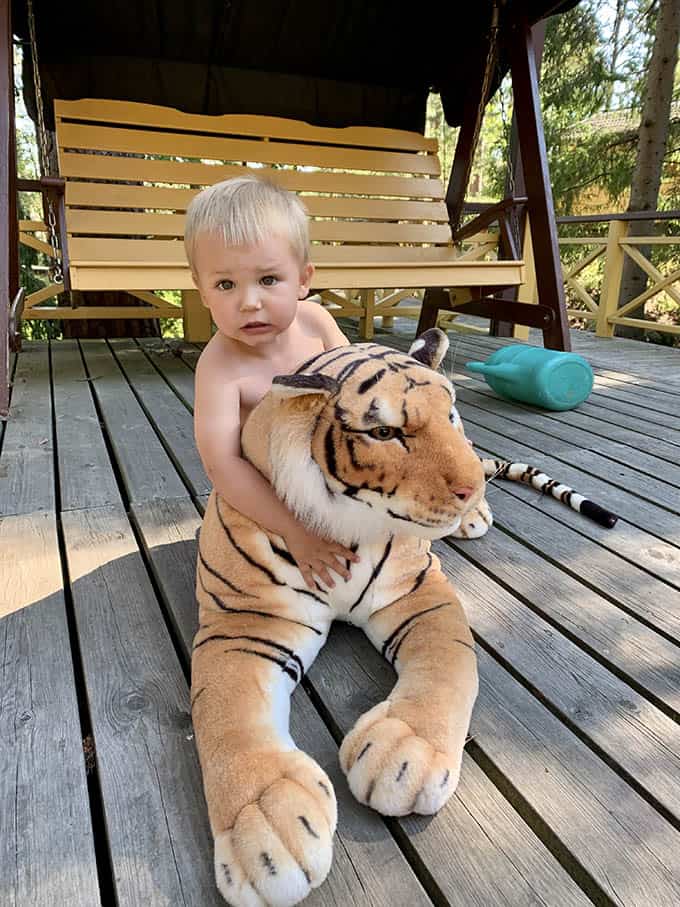 Odin’s language took a big leap forward over the course of our week together, or maybe just his English did. He’s still definitely not as verbal as his big brother was at the same age, but more and more he’s stringing words together and making himself well understood.

He started calling his brother Niko, rather than just Kiki all the time, which makes Niko happy and me a bit misty-eyed. One night he looked at me across the room and said, “More cookies, Mamma!” and it was so cute I nearly handed him the entire box.

We came back into the city on Friday afternoon, and naturally the weather has improved drastically since we’ve been here. A friend of mine told me that the city was empty, but the beach and park behind our apartment is hopping as usual. Maybe that’s just where everyone ends up. 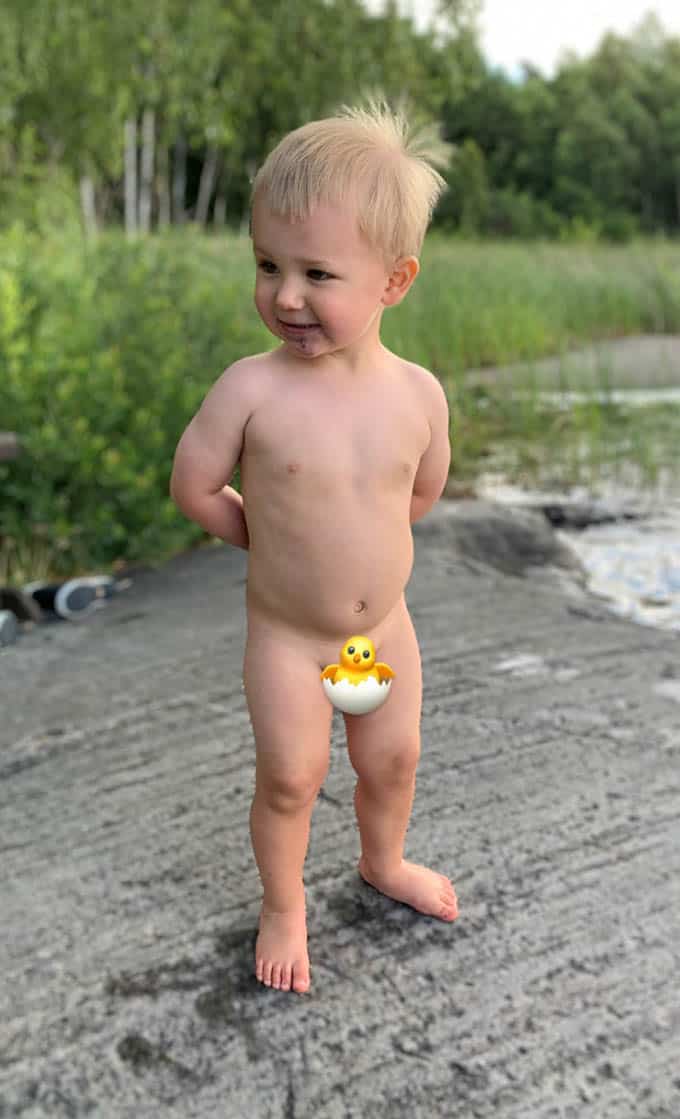 It feels like we’re in a bit of a bubble in Stockholm where life has carried on more or less as usual, other than that we’ll be working from home for the foreseeable future. While mask use isn’t widespread here, you better believe that if it was (or if it had been officially recommended, which it has not yet been by our government) that I’d be strapping one on.

I asked my friend Sarah to send me a couple of her favourite masks (I believe you can get a discount by using the code “Sustainable Cooks” at checkout) so that I’d be prepared in the event they do become more common / required here, and also because if we have a deep, snowy winter this year I may end up needing to commute by bus to get to the kids’ school.

I know that a great many of you are feeling anxious about schools opening up, and I can only imagine it feels somewhat similar to how I felt about our schools not closing down when the rest of the world was shutting them down… except with way, way more covid in the world.

I thought perhaps some of you might take some comfort in this study comparing rates of covid infection in school-aged children (aged 1-19) in Sweden, which did not have a lockdown, with Finland, which had a strict shutdown. The tl;dr is that although the two countries employed drastically different strategies, the rates of infection amongst those aged 1-19 was almost identical. Further, Sweden found no increased incidence amongst school teachers compared to any other profession.

I do realize that you can’t compare a tiny Nordic country with universal healthcare to, for example, the US, and how things will unfold over the next six – 12 months is anyone’s guess. But so far, our experience with keeping our kids in school has been just fine. 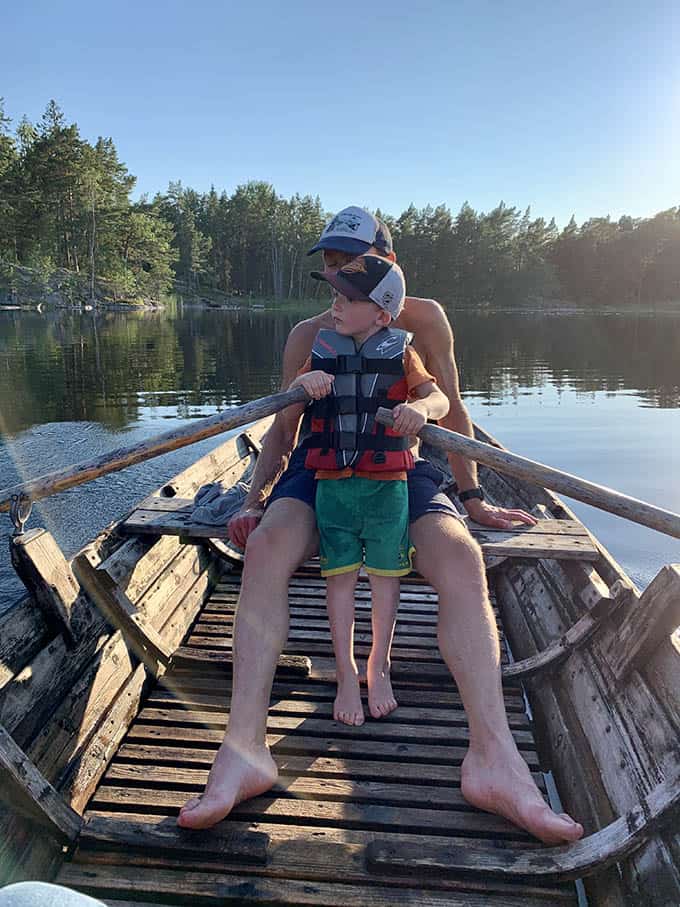 Hey, this was a big week behind the scenes on HNL as we switched over to a new ad network on Monday. It’s a slightly more fancy pants network than the one I was with previously, and the goal is to earn the same (or more) ad revenue while serving up fewer ads.

Hopefully you didn’t even notice there has been a change, and if you did, hopefully it hasn’t been annoying. I will let you know that I’ve opted out of any political ads, as well as ads for junk food, meat, or gambling, or tobacco. But ads get served up locally, and sometimes something obnoxious slips through the cracks.

If you see anything on the site you don’t think should be there, please send me a screen shot so I can report it to my ad network!

We kicked things off this week with one of my favourite grab-and-go breakfasts, Vegetarian Breakfast Burritos. 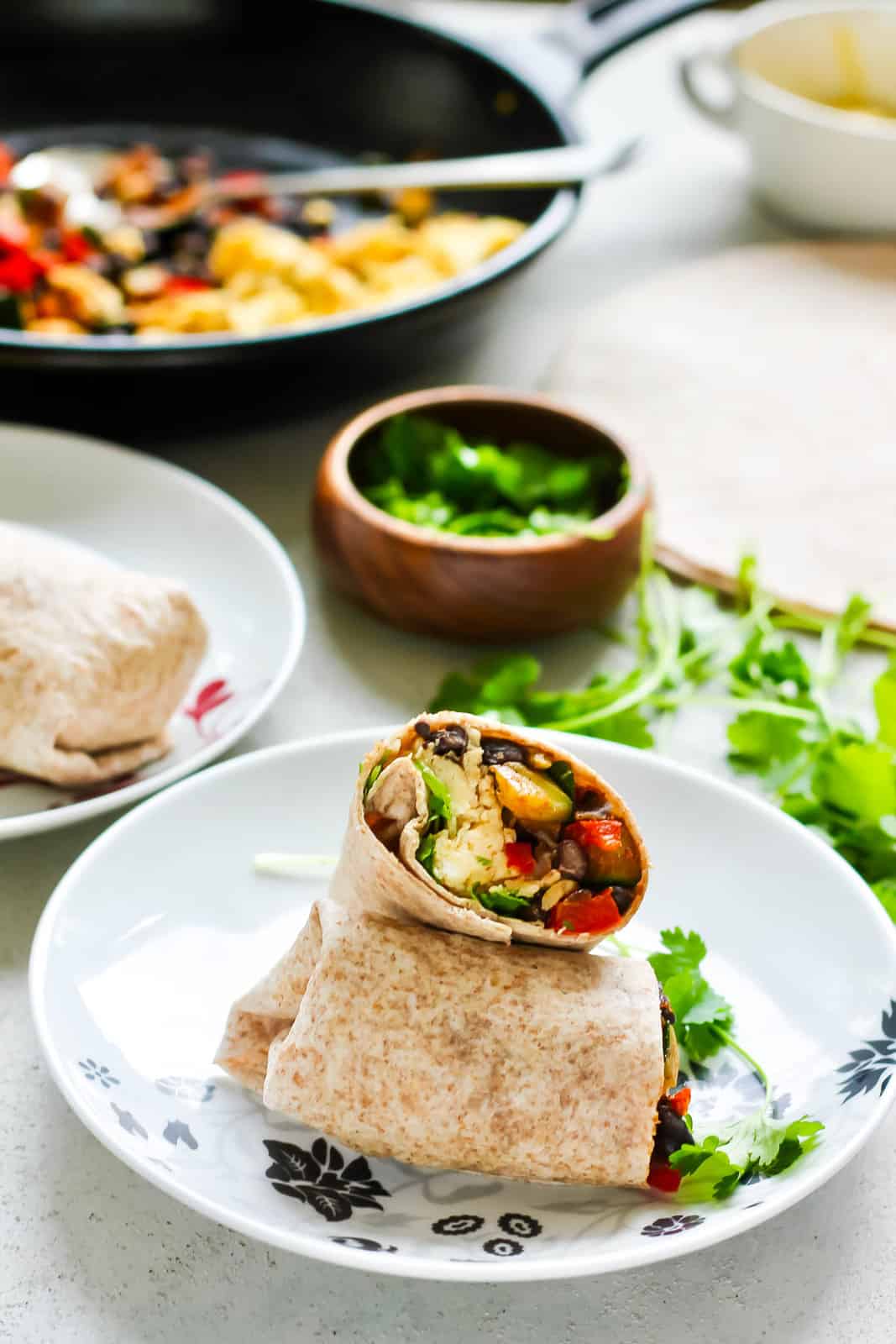 And one of my favourite picnic lunches or on-the-go meals, Vegetarian Rice Paper Rolls. It’s all about hand-held food this week! 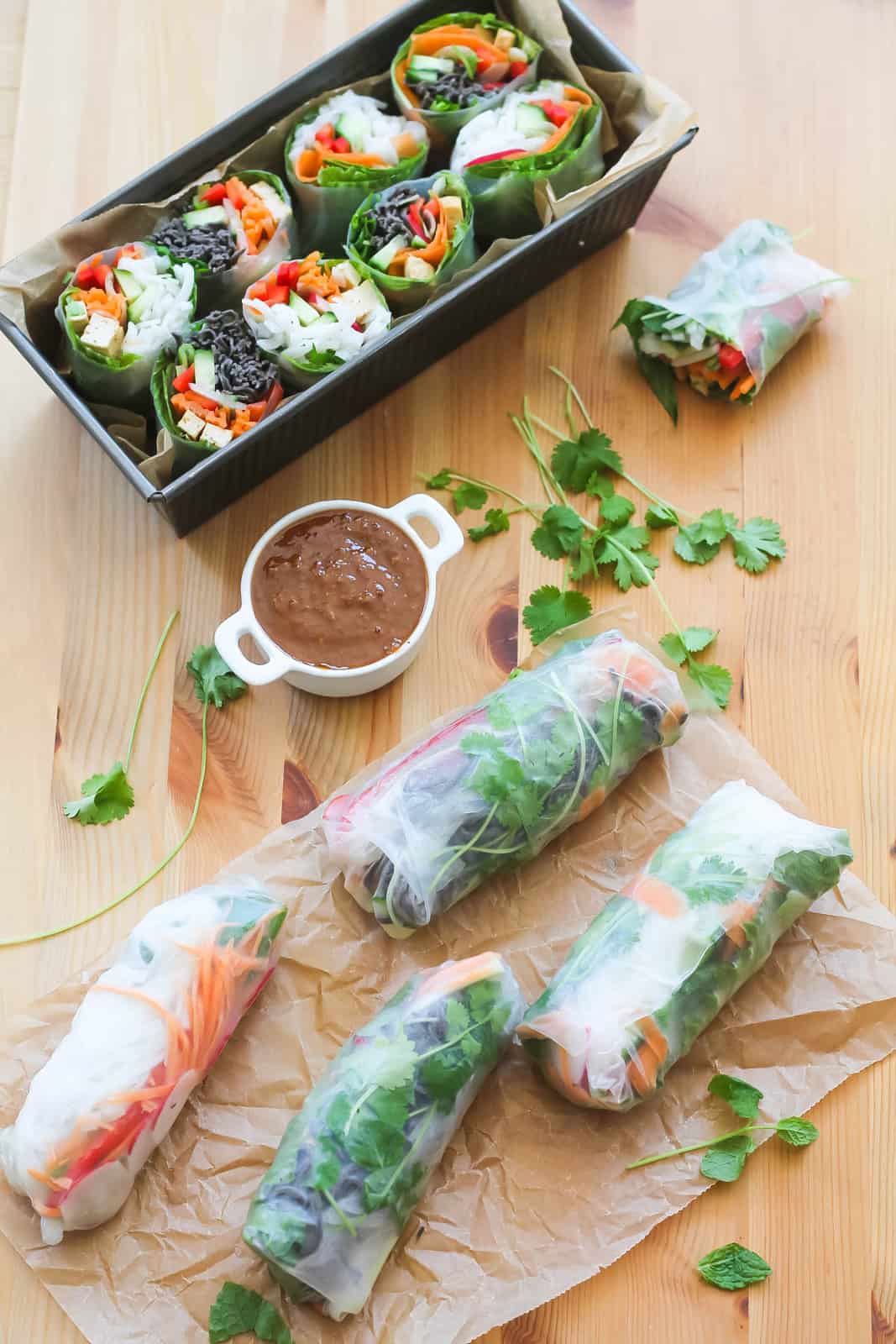 2. How to Cook Mung Beans. Google bumped us up to the top position for this keyword!

3. Instant Pot Pasta Sauce. This easy recipe blew up in a Facebook Group earlier this week.

Such a tasty dressing, I love it! Anchovies kind of creep me out and this is a great alternative. So good with the roasted garlic in it!!

I’m with you on the anchovies, Emily. And this dressing rocks! 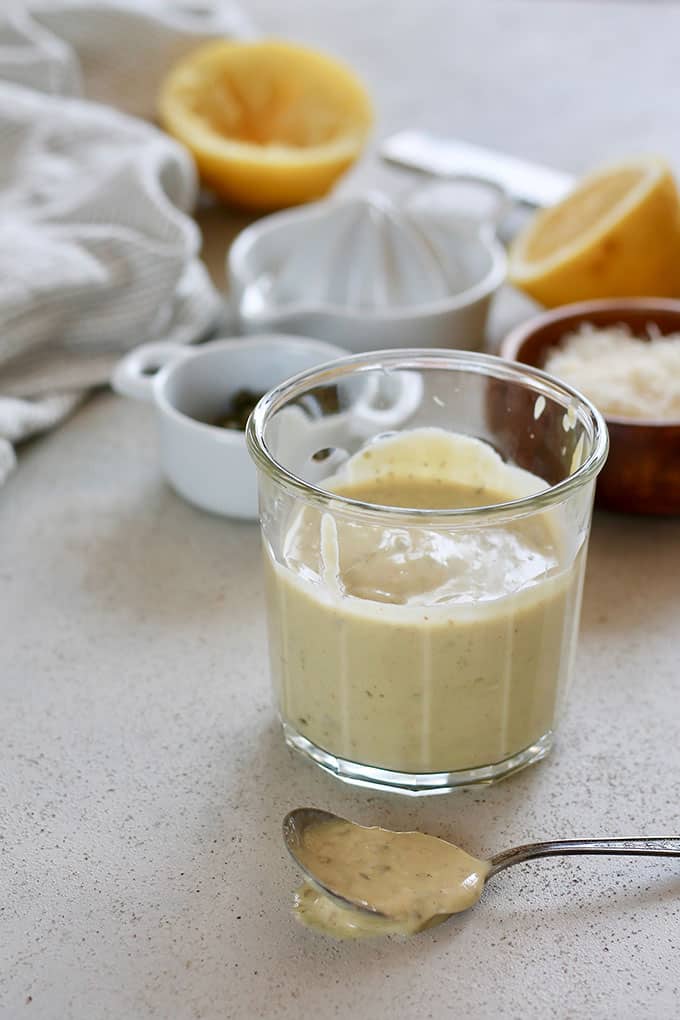 1. Burger King’s new “reduced methane” beef may be all hat, no cattle.

2. When trees walk the earth.

3. Good news: Scientists have finally figured out how many hotdogs a person can *actually* eat.