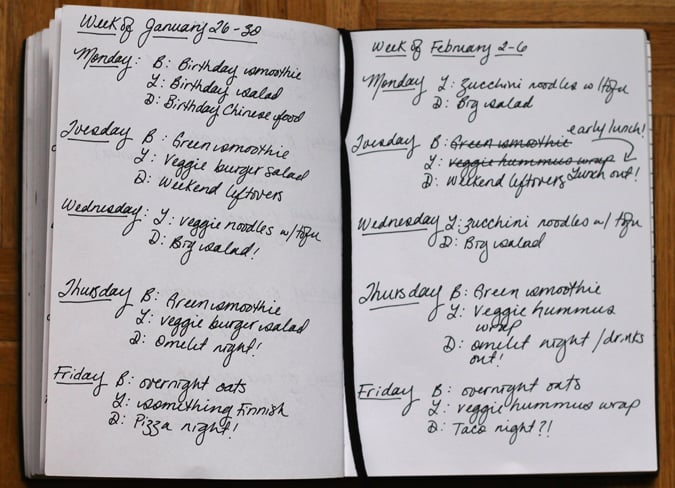 Here we are again. Another week, another meal plan. I started writing this one way in advance, and I suppose I could have left it as is, but I wanted to show you that the meal plan is a fluid thing. For example, last weekend I didn’t get around to making those veggie burger patties and so this week ended up being more about eating down the freezer than anything else. Also I left my lunch at home on Wednesday (threw the empty lunch bag into my backpack, doh!) so ended up buying lunch and eating Wednesday’s lunch on Thurs.

Next week I’ve got long in the making lunch plans with my former thesis supervisor (who, by the way, writes an excellent blog about obesity research) and since we’re taking an early lunch (around 11:30 since the place we’re going doesn’t do reservations) I won’t be needing breakfast that day (I normally eat breakfast at around 10). And, I’ve got after work drinks planned on Thursday which might preclude me from the usual omelet night, but it’s always nice to shake things up by that point in the week. The wraps, by the way, will probably be these chipotle hummus wraps, which I’ve discovered freeze like a charm if they’re made with roasted butternut squash instead of grated carrot. But if I’m busting out my roasting pan why not burrito bowls / freezer burritos instead? Time will tell.

As we discussed, I’ve been trying to better plan our Friday dinners, though I’m still finding it difficult. It’s near impossible to get the husband to commit to a particular Friday dinner even the morning of, let alone the week before when I write out these plans. Not sure if the planned pizza night will materialize this week as I’ll be coming back from a biz trip to Helsinki and will be fairly tired. We did takeout last Friday, and if takeout Fridays becomes a thing in our world, I’m more than okay with that. If not, I’m going to push for a taco night next week!

On to the links!

2. Is healthy eating really too costly? What do you think?

3. How broth became New York’s latest trendy delicacy. I love the tone of this article! Are you brothing these days?