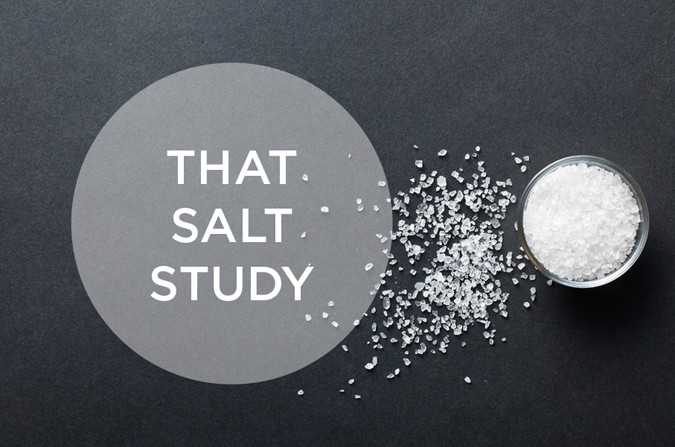 Friends, can we talk about that salt study?

Maybe you've heard of it, maybe you haven't, but in the kinds of places I like to hang out the internet has been all up in a twitch over an article published in the New York Times earlier this month titled Why Everything We Know About Salt May Be Wrong. The article outlines a recent study on Russian cosmonauts, held in isolation to simulate space travel, which challenges conventional nutrition wisdom when it comes to salt consumption. For years we've been told that salt makes us thirsty, makes us retain water, and is related to increased blood pressure. What happened with these cosmonauts, though, is that increased salt consumption somehow made them less thirsty but more hungry. These findings, plus some surprisingly patterned hormone fluctuations in their urine, lead researchers to conduct further studies on mice with unexpected results: they burned more calories when they got more salt. In fact, the mice that were given a high-salt diet needed to consume an average of 25% more calories just to maintain their weight.

So here's the sensationalist nutrition headline that's making me cringe: one of the many implications of this finding is that salt may be involved in weight loss. For many years the scientific community has assumed that a high-salt diet leads to a greater intake and retention of fluids, which increases weight. This new research is suggesting that not only may that not be true, but in fact, a higher salt intake may require the body to break down tissue, thereby increasing energy expenditure and resulting in potential weight loss.

Ok, great. But before we all go wielding the salt shaker in the name of health, let's just hold our horses for a minute. May I remind you for a moment about the fat-phobic 90's? A nutritionally-confused time when fat was a killer but it was totally cool to eat an entire package of Snackwells since they were fat-free? And then, what, 15 years later the scientific community was like, shit, we made a mistake. Now fat is back - I mean people are literally putting butter into their coffee - and folks are freaking the eff out about sugar.

And now it looks like salt is getting its turn. Hey, we were wrong about salt, it's not so bad after all. Salt helps you lose weight! Salt for everyone! Whee!!!

But here is, I think, the most important statement made about this study: “The work suggests that we really do not understand the effect of sodium chloride on the body.”

One more time for the cheap seats in the back: The work suggests that we really do not understand the effect of sodium chloride on the body.

This is the thing about nutrition: it's a science that's really still in its infancy. There is so much we don't yet know. There's a lot of confusion and disagreement about nutrition within the scientific community, nevermind the minefield that is internet-based nutrition knowledge for the lay person. And yet, if you look past the wildly swinging nutrition paradigms, past the fat phobia, past the sugar phobia, past the gluten/carb/wheat phobia, you'll find some solid, consistent, universal truths. Eating a largely plant-based diet has always been good for us. Moderation has a solid track record. And beans, well, they make you toot.

Maybe we don't deeply understand the effect of salt on the body just yet. Maybe it *does* have an impact on metabolism. But experience has taught us that the nutrition paradigm will likely swing again at some point not too far down the road. So let's just try to be sensible about this, and take this study with a grain of salt (<-- see what I did there?)