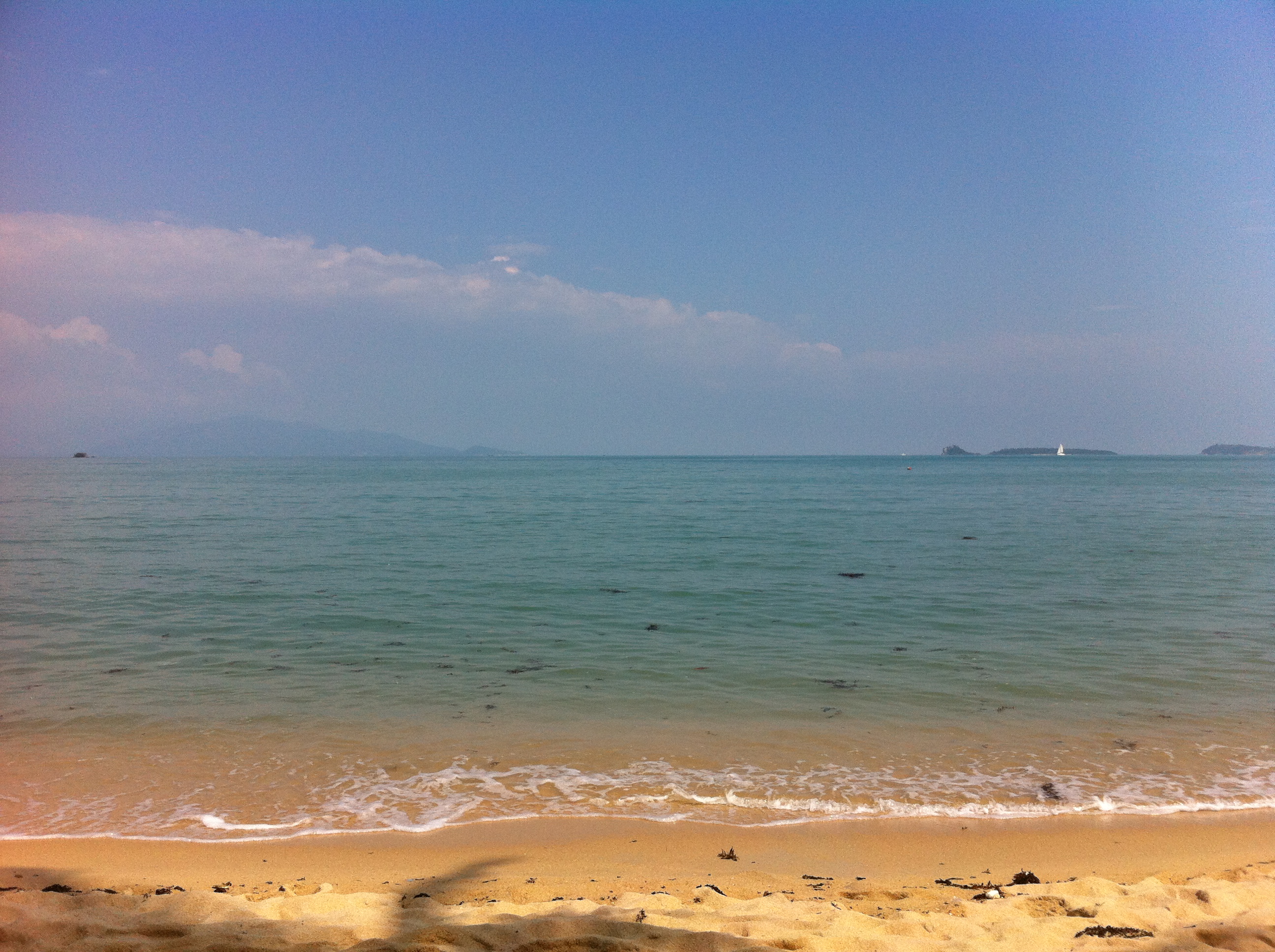 It was all well and good to spend some time in the city and have cultural experiences and whatnot, but frankly, we were ready to get back to the beach. We flew from Chiang Mai down to Koh Samui and settled in for a week of doing not all that much. I’ll admit I was a bit nervous about heading to Samui, Thailand’s biggest island, with a reputation for being a bit of a party island, and, a friend told me *after* we had booked non-refundable flights and hotels, that the weather in Samui is often unreliable at this time of year and it’s over run by American tourists and blah blah blah. Oh well, off we go.

I didn’t check the weather forecast for Samui until after we had already arrived there, and yes, it was terrible. But, it was fine. Each day the predicted rain got pushed back another day, and each day we had glorious sunshine and clear skies. Our first stop was Bophut, also known as the Fisherman’s Village, where we stayed in a fabulous little bungalow right on the beach with the friendliest staff perhaps of all time. We stayed there for 4 days during which we passed the time with lying on the beach, throwing a frisbee, playing cards. I finished one book and started another. We drank beer. We bought and ate fresh cut up fruit from a guy paddling down the beach in a canoe. It was, pretty much, the life. In the evenings we’d hop on our (smallest and most precarious) rental scooter and head into the Fisherman’s Village where there was a huge array of restaurants and bars. We’d take in a few happy hour specials and then figure out where to eat. Although I thought there was nothing all that special about the food we had in Samui – don’t get me wrong, it was good, it just wasn’t mind blowing – I did stumble on what was definitely my favourite dessert of the entire trip: home made coconut ice cream, served in a half of a fresh coconut, topped with fresh coconut curls, coconut jelly, and coconut milk. Hot dang, I was in coconut heaven. Down the street was a western style ice cream shop which was serving up cones for 140 Bhat PER SCOOP, and this guy was whipping up that concoction from a push cart on the side of the road, two for 80 Bhat? It was not a hard decision. That was the thing about Samui, there were a lot of tourists and a lot of tourists means tourist food and tourist prices. But there were still amazing little gems if you kept your eyes peeled for them, and so we did.

A few days in we booked a day trip to the Ang Thong national marine park, a stunning archipelago made up of 42 islands. We enjoyed a day of island hopping, snorkeling, kayaking, picnicking on the beach, swimming, and a hike up and down the steepest stairs I’ve ever been on (I have a recurring dream about being forced to walk up or down really precariously steep stairs, and this was like my nightmare brought to life) to see the spectacular salt water ‘Emerald Lake’ which was the inspiration for the book and movie, The Beach. At one point we overheard a tour guide telling someone that normally visibility from the viewpoint was about 40% and this day it was at 60%. We were so lucky.

We had only been able to book our beach front bungalow for 4 nights and so rather than switch to a non beach front bungalow (which really would have been no big deal, in retrospect) we had booked a hotel on a different part of the island. So we moved from quaint little Bophut to Chaweng, the biggest and busiest beach on the island. Again I approached this move with trepidation, and again it ended up being totally fine. We stayed in a resort at the far end of the beach away from the hubub, which meant that we could walk *to* the hubub if we wanted to, but we could also get away from it. It was a good place.

We rented another bike here, the last of our trip, and definitely the best, and spent some time bombing around the island. We drove pretty much all the way around it, stopping to look at phallic rock formations and big Buddhas and to throw our frisbee on a nicely deserted stretch of beach. We hung out in a real fisherman’s village and had overpriced happy hour cocktails at a beach front bar while looking out at women and ratty looking children de-tangling stinky fishing nets on the beach, and felt acutely aware of worlds colliding.

As these things tend to go, the worst thing about our hotel in Chaweng – a compulsory and hideously over priced New Years Eve gala dinner- brought us together with the best thing about our hotel in Chaweng – a certifiably mad French-Australian named Jean-Noel who was single-handedly responsible for one of the funnest New Years Eve celebrations I can remember. There were lanterns lit, firecrackers set off, beaches danced on, beverages consumed from buckets, and beyond that (or maybe because of that?) things get a little fuzzy and are probably best left unsaid. It was a seriously good time.

Our last day in Samui, the first day of the new year, the skies finally opened up. It was in many ways a welcome respite from the heat and the sun and the perfect excuse to nurse our aching heads with a mellow day. We faced an early and stupidly long travel day the next day to get ourselves back to Bangkok, with no one to blame but ourselves (note for the future – leaving it to the last minute to try and book a way off of the busiest island in Thailand on the busiest travel week of the year is a terrible idea. Live and learn.). Naturally we prepared for it by going out with our new friend for round two,which saw us saying goodbye to Samui very early, and very tired, after a very good week.

One year ago: They Brought Me Flours