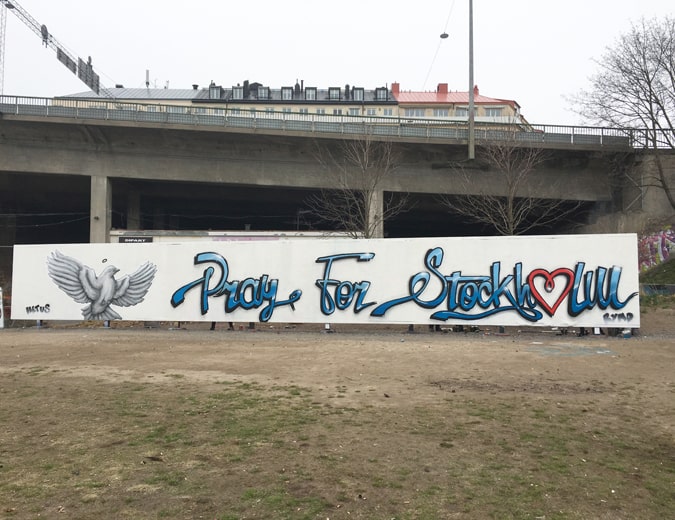 On Friday afternoon I was at work, in a meeting room with colleagues, a client, and a presenter from an external research agency, when our CEO came flying through the door and said something about an attack. My Swedish is pretty good, but our CEO talks really fast and these were words I had not heard before, so I looked to my colleagues around me to confirm what I thought he said.

Nobody said a word.

A computer was flipped open to a live news stream, and tears started flowing. A hijacked truck had been driven at full speed down a busy pedestrian thoroughfare and then slammed into the front entrance of a department store. There were casualties, but how many was yet to be confirmed.

Almost immediately everyone’s phones started blowing up with messages and calls, loved ones checking in. I first reached out to a friend who I knew had been in the area earlier in the day, and then with Paul who I doubted was in the area of the attack. It didn’t take long to account for all of my people. All lucky. All safe.

My first instinct was to leave work, go home and get to my boys, but we were told to stay inside if possible and stay away from the city centre. Reports started flying around about other incidents happening around the city, all of which turned out to be false, but we didn’t know.

My route home takes me right through the city centre and past the royal palace, which was rumoured to be blocked off, so I decided to hang tight at the office for a while before heading home on my bike. A colleague and I navigated the streets together, weaving through back streets since many of the major routes were closed. The subway system was shut down and no commuter trains were going in or out of central station, so the streets were filled with an eery procession of shaken people slowly making their way  home on foot.

But it wasn’t until the next afternoon when I watched a video of the incident, security footage from inside a store on Drottninggatan which showed terrified people running into the store, then seconds later the stolen truck flying past at full speed, that I really appreciated the gravity of what had happened.

Stockholm isn’t that big a city, so pretty much everyone has a It Could Have Been Me story. I’ve casually walked down that street a thousand times. Often pushing a baby carriage, often with earphones in. There is a great health food cafe in Åhléns where I love to have lunch. In fact, I suggested a lunch there just last week. And right across the square is Kulturehuset which has a brilliant kid’s library where I took Niko about once a week while on maternity leave. It’s a pedestrian street that gets annoyingly crowded at times, but it’s a fun place to walk, shop, eat, take visitors, etc.

The city will recover, and I’ll walk down that street again, and many other streets just like it, because I refuse to live in fear. But lives were lost due to a terrible and senseless attack in my city. I had a recipe lined up to share today, but it seemed a bit wrong to post it without a mention of what happened in Stockholm on Friday. And it seemed even more awkward to segue from talking about a terror attack into a recipe, so the recipe will have to wait. I just wanted to let you all know that we’re ok here. Give your loved ones an extra squeeze for me tonight.