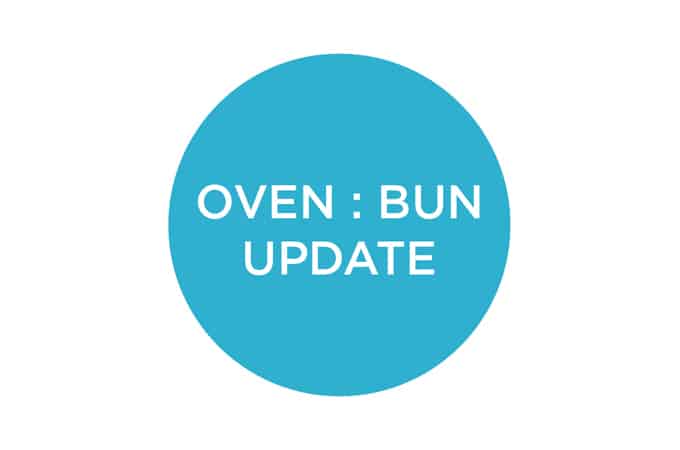 I haven’t talked much about my pregnancy beyond a few mentions of food aversions, mostly because I didn’t want baby talk to overwhelm the food and nutrition content I know most of you are here for. But I’ve had a number of very sweet emails checking in to see how things are going, so I thought I’d round out the second trimester by updating y’all on the whole oven : bun situation.

So, first things first, the number one question we get asked… do we know the baby’s sex??? Nope! We’ve decided to wait and find out when the baby arrives. There are a number of reasons I didn’t want to find out, superstition being a big one of them, especially having miscarried previously. I also think there are so few happy surprises in adult life. Usually it’s like, “you owe taxes!” or, “your apartment needs a repair that means you’ll have no running water for two months!” so we thought, “it’s a ____!!!” seemed like fun.

But also because I think Paul and I will fight less over trying to choose names if we don’t know what we’re having. And actually, we’re not really fighting about it that much. He’s rejected my favourite girls name, and I’ve rejected his favourite boys name, and we’ve got a short list of names we can agree on for each sex that we’ll try out when the baby arrives. No, I’m not sharing them. I can say that we’re going with a Swedish name, since we want the baby to have a connection with where it was born in the event we move back home. But it has to be a Swedish name easily pronounced by our families, which eliminates a LOT. Basically anything with a ‘j’ or a Swedish vowel (å, ä, or ö) is out. So you can rest assured it won’t be Torbjörn or Åsa, but it might be Astrid or Axel (<-- it’s totally not).

The second most popular question is how I’m feeling. Fine, thank you very much. Once the nausea and food aversions of the first trimester were mostly behind me, it’s been pretty much smooth sailing. Though I am starting to feel some third trimester aches and pains creep in, so ask me again in a month or so.

Nutrition wise things have improved considerably, and I can now look most vegetables square in the eye. My food preferences definitely remain changed, though. I'm not much into salads or smoothies, which used to make up a good portion of my daily diet. I'll eat a salad if someone else makes it, but if left to my own devices I'd much rather have a grilled cheese sandwich. Warm food is preferred to cold, and I'll eat almost any vegetable if it has been cooked. But speaking of cooking, I don't love it these days and I must tell you that our weekday meals end up on the table 100% due to Paul cooking them. If it were up to me we'd have take out or mac and cheese every night of the week. I'll still help out with cooking on the weekends, but when I come home from the office tired and hungry it's just too much.

Mostly, I’ve just carried on with life like it’s business as usual, only with substantially less wine. I’ve more or less kept up the same exercise routine as I had before, except that I’m Slow As Heck these days. When I go for my lunch hour swims I feel like I’m working twice as hard, but I’ve been getting slower and slower with every week that goes by, and while I used to pretty much dominate the fast lane (at the rinky dink little pool I swim at, not with actual fast swimmers like Paul) I’m now having a hard time holding my own and am getting passed all the live long day. But man oh man does it feel good to get into the water!

I’m still commuting to work on my bike, which I said I would do until it felt unsafe or the ice comes, neither of which has happened yet so on I go. But I do think my days are numbered, especially considering I can no longer get my rain pants on, and it seems the mild autumn weather we’ve been enjoying is about to take a turn and the temperatures are set to dip into the minuses, so that will be that.

I am tired though, really really tired. But that's in part due to the fact that I've been working pretty bonkers hours lately, with a lot of late nights and weekends at the office. It's also largely due to the fact that I'm sleeping like shit these days, which I think is at least partly pregnancy related. I've never been someone who needed to get up in the night to use the toilet, and now I'm up 2-4 times most nights, which drives me crazy. Though I've never been a great sleeper, I've become a much lighter sleeper than I was before, and this has coincided with my dear husband taking up snoring like it's a competitive sport. I swear it happened overnight when he turned 40, and no earplugs or white noise machine or combo of both can possibly match the decibel at which he's operating. So I end up on the couch a lot these days, which luckily is very comfortable.

The one thing that has surprised and fascinated me the most about pregnancy is how it seems to be open season for other people scrutinizing and commenting on my body; what goes into it, how much weight I may or may not have gained, and where I may or may not have gained it. It’s really quite bonkers that a complete stranger would come up to me in the swimming pool showers and assure me that, “your face isn’t fat at all!” which I suppose is intended as a compliment, but really?

My diet, too, seems to be open for constant commentary, especially at work since I schlep a plate of food with me into practically every meeting. Because I’m HUNGRY! ALL! THE! TIME! And I’m hungry because I’m GROWING A PERSON! But yes, the pregnant lady is eating, AGAIN! I’m convinced that this baby takes after its father and is in there training for its first marathon or SwimRun world championship. Baby is busy in there, and baby loves carbs. Who am I to deny it?

While I’ve learned that you need to have a fairly thick skin while pregnant, the weight gain hasn’t disturbed me in the slightest. I’ve approached the whole thing with a scientific curiosity, and have watched with great interest as the scale has crept up week after week. I haven’t weighed myself in a few weeks, but I suspect that by now I’ve gained somewhere around 25lbs. This is more than the books say I should have gained by now, but the books can bite me. They say that the average weight gain during pregnancy should be 25-35lbs for a woman who was of “normal” weight to begin with, but I’d say I’m more on track for 40lbs, or a little more, if I continue gaining at the totally healthy rate of 1lb per week over the next 14 weeks. It is what it is, which is all a part of growing a person. And we’re all different, so good grief; don’t pay too much attention to what those dang books say!

So there you have it. How I’m doing, in a nutshell. I’ll be back soon with a second trimester nutrition post, and thoughts on prenatal supplements (I’ve gone a bit rogue in that department). Thanks again for checking in! 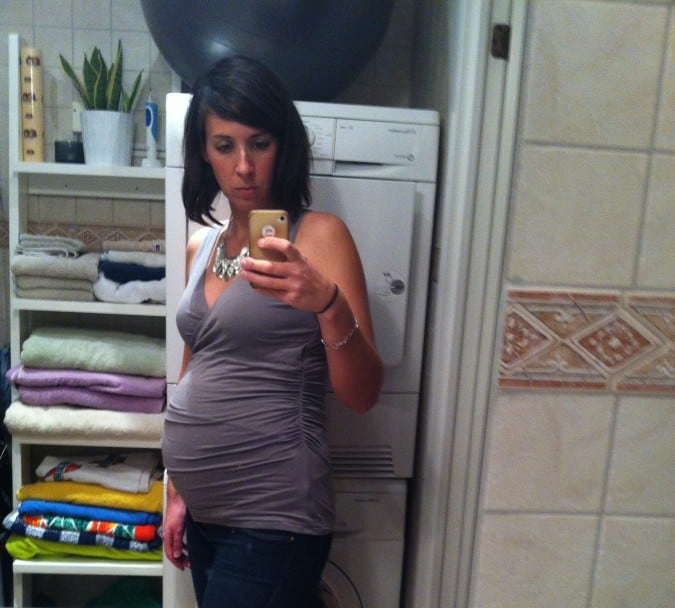 My attempt at a 26-week bump-shot selfie!

« what's good around the web!
no sugar banana bran muffins »